Can anyone replace Netanyahu?

After 12 years of Netanyahu rule and four elections in two years, voters are facing the ‘most unpredictable election in Israel’s history’ 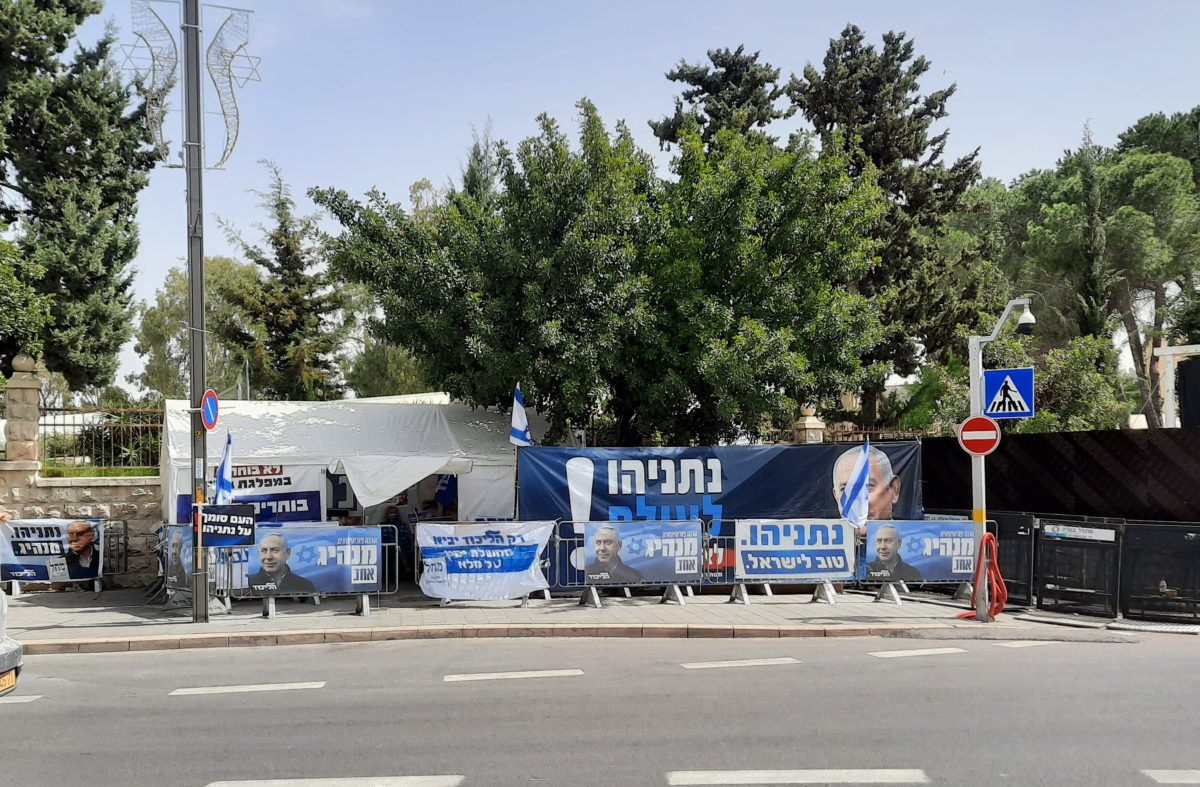 The pro-Netanyahu encampment set up outside the prime minister's residence in Jerusalem.

Israelis head to the polls on Tuesday for the fourth national election in two years — amid concerns that a fifth could follow closely behind.

Why is this election different from all other elections?

In every national vote over the past 12 years, Prime Minister Benjamin Netanyahu has managed to emerge, if not victorious, then close enough to hold on to power. Even after an indictment on corruption charges, months of nationwide protests over Netanyahu’s rule and the immense challenges of COVID-19, Netanyahu’s Likud Party is still leading in the latest polls.

“In politics, nice guys finish last,” veteran Jerusalem Post political correspondent Gil Hoffman told Jewish Insider on Sunday. Netanyahu “has proven himself to be politically adroit enough to withstand any challenge,” he added. “Netanyahu has left plenty of legitimate leaders in the dust.”

Over the past decade, Isaac Herzog, Yair Lapid and Benny Gantz have sought to oust Netanyahu from the prime minister’s residence on Balfour Street, to no avail. This time around, Netanyahu faces not just a challenge from a familiar foe — Lapid — but also from two well-known figures on the Israeli right, who are both former allies: Naftali Bennett of Yamina and Gideon Sa’ar of New Hope.

Bennett got his political start as chief of staff to Netanyahu, while Sa’ar was a longtime Likud member who held multiple ministerial positions alongside the prime minister. Could a challenge to Netanyahu from the right prove more successful?

“Bottom line, Israel is more and more leaning to the right wing these days,” said longtime Haaretz correspondent Noa Landau. And while the political landscape has shifted from a year ago, “as long as Netanyahu is the strongest right-wing leader, it wouldn’t help if Sa’ar or Bennett are trying to challenge him on the right… It’s not about which party gets more votes, it’s about building a coalition.”

And with the forces working to oust Netanyahu appearing increasingly splintered, such an effort seems less and less likely. Whatever the outcome of Tuesday’s vote, all eyes will quickly turn to the parties’ meetings with President Reuven Rivlin set to begin during Passover, when each faction will recommend a candidate for prime minister; Rivlin will then determine who will get the first shot at forming a government.

Netanyahu first became prime minister in 1996, ousting Shimon Peres in a surprise victory in the first — and since abandoned — direct prime ministerial vote, winning by a 1% margin. Three years later, he was defeated by Ehud Barak, but in 2009 Netanyahu returned to the prime minister’s residence, and hasn’t left since.

While op-ed after op-ed after op-ed has declared the end of the reign of Netanyahu, nothing so far has shaken the man who has been referred to as “Teflon Bibi.” He even coasted into becoming the longest-serving prime minister in Israeli history in 2019.

Within Likud, Netanyahu has kept close control over the party, surrounding himself with an army of loyalists and stymying the aspirations of potential challengers. He won the last three Likud leadership primaries with more than 70% of the vote — the most recent of which was against Sa’ar.

“Netanyahu has ruled the party with an iron fist and not tolerated any challenges,” said Hoffman. “Those who had the courage to challenge him ended up regretting it.”

And the looming specter of Netanyahu’s continually delayed corruption trial appears to have had little effect on his popularity.

That came as no surprise to Landau — and she believes it is something Americans should easily understand.

“I think that actually for Americans it should be very clear,” she said. “There were serious allegations against [former President Donald] Trump and it wasn’t something that affected his voters. When someone supports someone that strongly, then everything is a conspiracy. Bibi’s voters don’t really believe that these allegations are real, serious or fair…. So it doesn’t affect them just like it didn’t affect Trump voters.”

Hoffman noted that opponents of Netanyahu “already think that he’s corrupt based on his trial in the media and all the evidence out there.” Meanwhile, his supporters have bought into the prime minister’s claims that the corruption charges are bogus and politically motivated. “There’s very little in between — there are very few people with ambivalent views about the prime minister.”

But in this election, Netanyahu came in “with a great disadvantage, because he lost his political bloc and he lost Donald Trump,” said Hoffman. Unlike the past three votes, Netanyahu doesn’t have “a close friend in the White House willing to campaign for him.”

Last year, for the first time, Netanyahu signed a deal that would have seen his term as prime minister come to an end this November, when he was slated to step aside for Gantz to take the job. That deal fell apart within months, and while Netanyahu emerged relatively unscathed politically, Gantz’s Blue and White Party is polling on the brink of the electoral threshold.

“I think it’s fascinating that a former IDF chief of staff like Gantz met a foe that he was not conniving enough or strong enough to face off against, let alone defeat,” said Hoffman.

Netanyahu won’t be around forever, and one day — perhaps even soon — another candidate will take control of Israel’s government. With the final polls indicating an even split between the two political camps — the pro-Bibi camp and the anti-Bibi one — even Israel’s top political analysts are wholly unsure how things will play out.

“It’s about who is going to assemble the [coalition] puzzle, not necessarily about who gets more votes,” said Landau. “If you look at the bigger picture, it’s pretty complicated compared to other rounds of elections… it’s not that clear.”

Hoffman noted that while much of the world has lost interest in Israel’s repeated votes, this week’s vote is “the most unpredictable election in Israel’s history.”