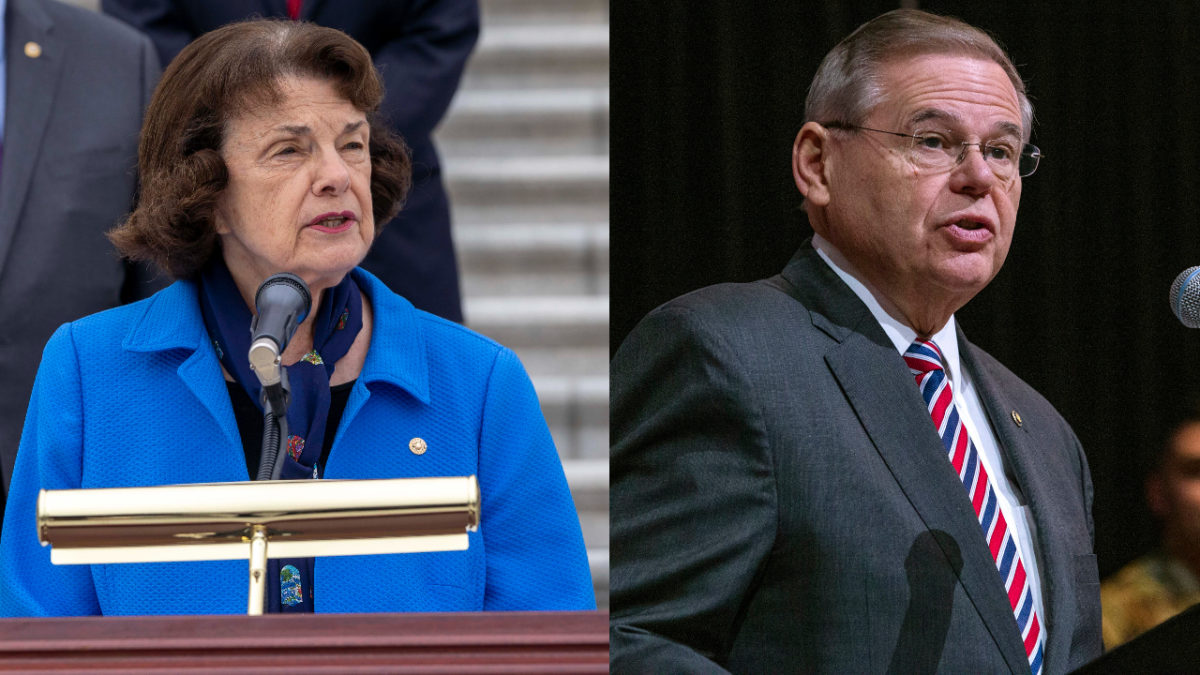 Sens. Robert Menendez (D-NJ) and Dianne Feinstein (D-CA) are making a new push to create roadblocks for the sale of advanced F-35 fighter jets to the United Arab Emirates and other foreign powers after the Biden administration announced last week it would allow the deal to go forward. The senators’ first attempt to halt the sale, in October 2020, failed to receive a full Senate vote.

The F-35 sale was first agreed to under the Trump administration last year in the aftermath of the Abraham Accords, which normalized relations between the UAE, Bahrain and Israel. Senate Democrats, including Menendez and Feinstein, attempted to block the sales at the time, arguing that it was rushed and could pose a risk to the U.S., Israel, U.S. technology and human rights.

The Biden administration temporarily halted the F-35 sale after taking office, but informed Congress last week that it had agreed to proceed. The new bill would, among other provisions, seek to protect Israel’s military edge in the region.

In December 2020, a joint resolution to stop the F-35 sale failed in the Senate by a vote of 49 to 47. Sen. Kyrsten Sinema (D-AZ), who has become one of the Senate’s swing votes, was the only Democrat to vote to allow the sales to proceed, while Sen. Rand Paul (R-KY), a longtime skeptic of U.S. military engagements abroad, broke with his party to vote with Democrats.

“I remain concerned with the implications of a sale of our most advanced fighter jet given numerous outstanding, unanswered questions about the implications of this sale for U.S. national security, our technology interests and implications for regional stability including the legal parameters of Israel’s Qualitative Military Edge,” Menendez said. “But if the administration has decided to proceed with this Trump-era deal, then we must enact protections to ensure the incredibly sensitive technology of these aircraft is not compromised by powers hostile to the United States, including making sure the UAE pulls back from its burgeoning relationship with China and other U.S. competitors.”

The new legislation requires the president to certify that jets provided to Middle Eastern countries will not undermine Israel’s protected Qualitative Military Edge; that the recipient nations have provided verifiable assurances that they will not use the aircraft against Israel or to commit human rights violations; and that recipients will sufficiently protect F-35 technology from falling into third-country hands. The legislation also requires additional public disclosures about F-35 sales to the UAE specifically.

After the Biden administration informed Congress last week that it intends to proceed with the sale, a State Department spokesperson emphasized to Reuters that: “We will… continue to reinforce with the UAE and all recipients of U.S. defense articles and services that U.S.-origin defense equipment must be adequately secured and used in a manner that respects human rights and fully complies with the laws of armed conflict,” adding that the jets will likely not be delivered until 2025 at the earliest.

According to David Makovsky, the director of the Arab-Israeli relations project at the Washington Institute for Near East Policy, the Biden administration likely greenlit the sale because it sees it “as integral to the Israeli-Emirati breakthrough on normalization.” He added that, if passed, the Menendez-Feinstein bill would be unlikely to stop the sale entirely.

“I see the concerns of the Menendez-Feinstein bill as not focused on the principle of the sale but focused on aspects of implementation,” he said. “In other words, before delivery of the F-35 in 2025 or 2026, the US would verify the sale would not hurt Israel’s qualitative military edge, technology safety measures are in place and the UAE has [not] provided weapons to the enemies of Israel.”

Last December, then-Israeli Ambassador to the U.S. Ron Dermer said in an MSNBC interview that Israel was “very comfortable” with the F-35 sale to the UAE, which he called “an ally confronting Iran.”

The bill is unlikely to pass the Senate, and, with the Biden administration’s imprimatur, it’s possible more Democrats will lend their support to the sale.

J Street spokesman Logan Bayroff told JI that the organization still opposes the deal because the “deadly weaponry… will endanger civilians and further erode the security of the U.S. and our allies.” AIPAC announced last year that it did not oppose the sale, which remains the organization’s position according to a source familiar with the issue.