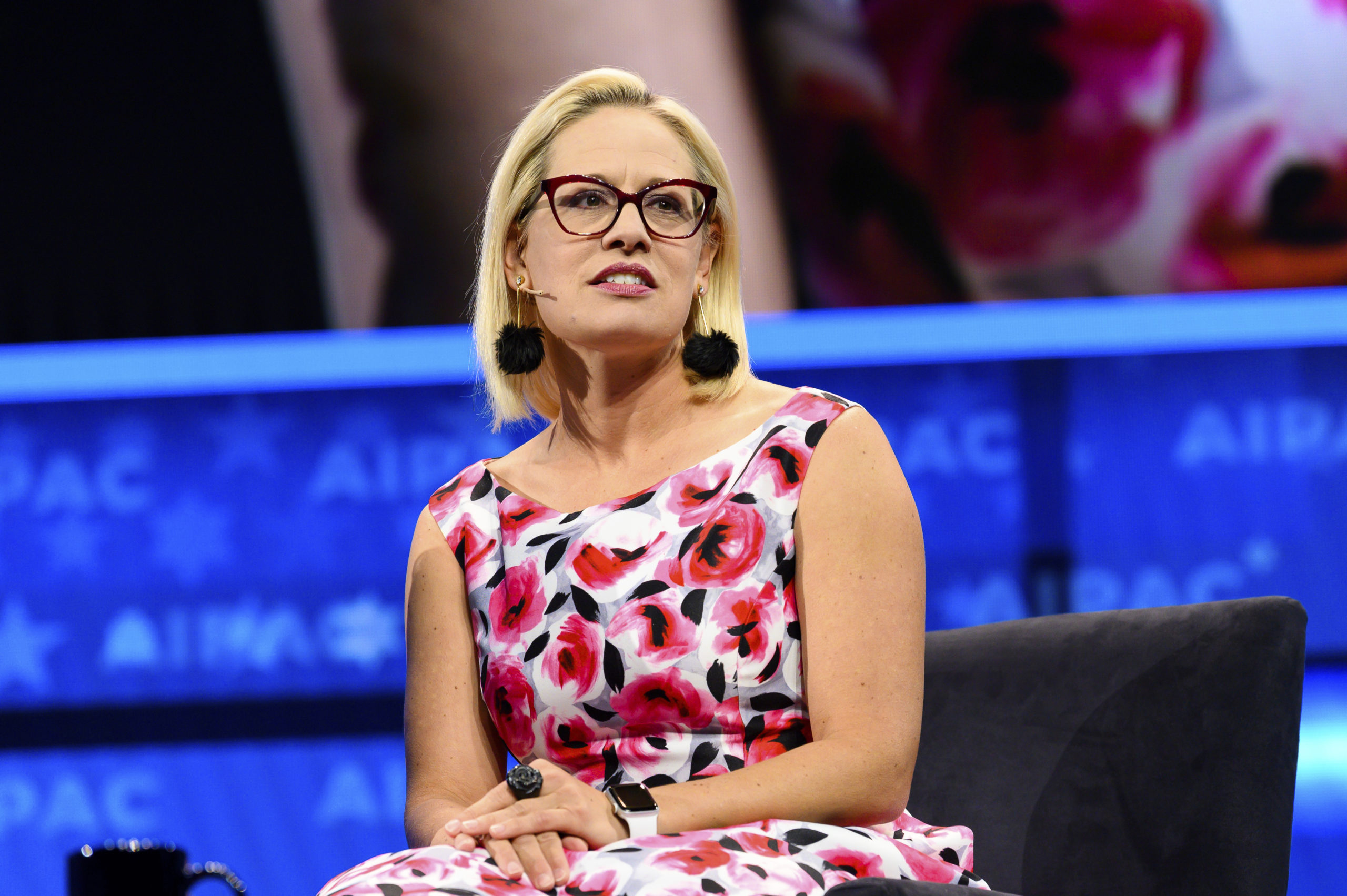 After getting her start in politics in anti-war activism, Sinema has come to be viewed as a friend of the pro-Israel community

When Republican Sen. John McCain cast a tie-breaking vote against a GOP effort to repeal the Affordable Care Act in 2017, he signaled his opposition with a dramatic thumbs down on the Senate floor. Three and a half years later, another Arizona senator, Democrat Kyrsten Sinema, appeared to use the same bucking-the-party playbook last month when she offered a thumbs down to raising the federal minimum wage.

For Washington observers, Sinema’s opposition to a key Democratic priority came as a surprise, and signaled that — along with Sen. Joe Manchin (D-WV) — Sinema could be an unpredictable, make-or-break vote for Senate Democrats, who hold the thinnest possible majority in the chamber as they try to enact their legislative priorities.

But to Arizonans, Sinema’s vote against her party was not a shock; since she was first elected to the Arizona House of Representatives in 2004, kicking off a legislative career that would take her to the state Senate, Congress and finally the U.S. Senate, Sinema has gained a reputation in the Grand Canyon State as an independent-minded politician.

Interviews with Jewish community leaders and activists in Arizona reveal a respect for the senator’s political savvy and her willingness to chart her own course in a state that prides itself on independence and self-sufficiency, even if her current views are dramatically different from the beliefs she once held as a young anti-war activist. Independence is lauded in the state: Nearly a third of registered voters are not affiliated with a party.

Sinema had first tried — unsuccessfully — to run for office as a member of the Green Party following years of grassroots anti-war activism, but found she could not win with that third-party affiliation. “Everybody knew that as she made her way through the Arizona political system here that she would roll back [her views]. In order to be elected, she certainly had to have a moderate position,” said Civia Tamarkin, president of the Arizona chapter of the National Council of Jewish Women. “Everybody who knew her as an Arizona legislator knew that she was a centrist, that she worked both sides of the aisle,” Tamarkin noted.

Sinema’s opponents have tried to use her past against her. But now, in her fourth elected post, Arizona insiders say Sinema’s former activism is acknowledged as simply part of who she is. She has tried to preempt any such criticism — successfully, given her defeat of Republican Martha McSally in 2018. When she ran for Senate that year, “she went and planted her flag right in the middle,” said Mike Noble, an Arizona pollster and political analyst. “She didn’t even use the words Republican, Democrat or any of that stuff. She was talking, ‘Hey, I want to represent Arizonans.’ So she talked very much to the center, and she made no bones about it.” Meanwhile, Noble said, McSally “ran as Trump but made zero effort to move to the middle.”

Seeking a middle ground and avoiding intense partisanship are important in the Jewish community, too. “Most Jewish folks here are kind of uncomfortable with the radicalization of the political divide and the polarization that’s taking place,” said Larry Bell, a historian and the executive director of the Arizona Jewish Historical Society.

American Jews vote overwhelmingly for Democrats, and Bell says that while this is generally true in Arizona, the state also has a long history of prominent Jewish Republicans. “There’s a strong history of Republican Jewish activity here, especially in Phoenix. They’ve never been the majority of the community, but they’re important people in the community,” Bell explained, pointing to Harry Rosenzweig, Barry Goldwater’s childhood best friend who managed his 1964 presidential campaign.

Bell doesn’t entirely buy Sinema’s shift in positions, though he says she has widespread support in the community. “It doesn’t quite add up,” he said, noting that “she’s very popular in the Jewish community.” Bell added, “I’d say she’s one of the more popular politicians actually.”

Since running for Senate, Sinema has cultivated a relationship with Arizona’s Jewish community. Carlos Galindo-Elvira, who served as Arizona director of the Anti-Defamation League until last January, told Jewish Insider that members of Sinema’s staff reached out in October 2018 following the mass shooting at Pittsburgh’s Tree of Life Synagogue. “I remember very clearly, while I did not get a call from her personally, she ensured that her staff called and checked in, to ensure, you know, are we OK? And just wanting to check in on us,” Galindo-Elvira said, adding that he did not often receive calls from the likes of a U.S. senator [though Sinema was still a candidate at the time]. “Because of the gravity of the growing level of antisemitism that was happening throughout the country, it was a call that reinforced, at least in my thinking, that she understood that this is a problem,” he said.

Although Sinema got her start in politics in left-wing activism, affiliated with anti-war groups like CODEPINK that have taken stances sharply criticizing Israel, there is no record of Sinema ever expressing such views herself. She has become a reliable “yes” vote on pro-Israel legislation. As a member of Congress, she voted against the Iran nuclear deal in 2015, a position adopted by a large swath of Jewish leadership. She has spoken at AIPAC-affiliated events in Arizona and the AIPAC policy conference; after her 2019 speech, CODEPINK tweeted its disapproval, writing, “Once upon a time, @SenatorSinema participated in CODEPINK protests and stood firmly against Apartheid Israel and @AIPAC. Could it be…all about the Benjamins baby?”

CNN’s KFILE reported in 2018 that in the early 2000s, at the start of the Iraq War, Sinema ran a group called Local to Global Justice that criticized “U.S. terror” in flyers from 2003; Sinema’s office told CNN she had no role in creating the flyers.

A spokesperson for Sinema told JI that the senator is unapologetic about her changing positions: “Senator Sinema prides herself on being a lifelong learner and believes a sign of maturity is an interest in learning and growing. For her, that means listening to a variety of opinions — even from people with whom she disagrees — and doing so in a way that’s open enough to be able to learn and sometimes change her views. That’s not a popular notion in today’s politics.”

Despite her earlier alliances with groups critical of U.S. foreign policy, people involved in the pro-Israel community in Arizona do not doubt her current support for the U.S.-Israel relationship. “She and her staff have had an ongoing dialogue with the community, and her knowledge level over time has increased exponentially,” said Ron Ober, who co-founded a bipartisan political consulting firm in the state.

After surprising Democrats by voting against the minimum wage increase, Washington now understands that a moderate like Sinema holds remarkable sway for President Joe Biden’s agenda — and it’s a muscle she has already begun to flex. Sinema told The Wall Street Journal yesterday that she does not intend to abolish the filibuster, which progressive Democrats see as the only way to pass voting rights legislation and gun reform bills. “When you have a place that’s broken and not working, and many would say that’s the Senate today, I don’t think the solution is to erode the rules,” she said. “I think the solution is for senators to change their behavior and begin to work together, which is what the country wants us to do.”

Another area where her vote will soon matter is on the confirmation of Colin Kahl as under secretary of defense for policy, a Biden pick who has come under scrutiny for past comments he has made about Israel and about the 2015 Iran nuclear deal. A spokesperson for Sinema told JI that the senator remains undecided on Kahl’s nomination: “Senator Sinema is carefully considering this nomination,” the spokesperson said. “She evaluates all presidential nominees based on whether they are professionally qualified, whether they believe in the missions of their agencies and whether they can be trusted to faithfully execute and uphold the law.”

Not all of Sinema’s supporters are proud of her independent streak, or what some see as a betrayal of her principles. “We understand the pragmatism of her strategy, and when the votes are throwaways” — as when Sinema voted for certain Trump judicial nominees who were guaranteed to be confirmed in a Republican-controlled Senate — “we understand. It doesn’t necessarily make one happy and supportive, but it’s understandable,” said Tamarkin of NCJW. “But the disappointment is that there are certain fundamental issues, and minimum wage is one of them.”

Polling that Noble’s firm conducted after Sinema’s minimum wage vote showed that she had lost support with Democrats, with just 50% of Arizona Democrats holding a favorable view of her, compared to 68% who have a favorable view of Mark Kelly, her fellow Democratic senator from Arizona. Notably, despite her highly cultivated image as an independent, just 36% of self-identified independents view Sinema favorably, compared to 49% who view Kelly favorably.

“She really didn’t get much of a gain, if anything, with independents, but really lost support among liberals or among her base support,” Noble told JI. “Most people are saying, ‘Oh, that’s terrible.’ It’s like, well, is it? Because she’s not up for [reelection for] four years…I think it is a bold but smart play long-term.”

Although Arizona is now represented by two Democratic senators in Washington, and though Biden flipped the state from red to blue at the national level, locals caution that the state is not a reliably blue state yet. “I think in Arizona in general, what happened in the last election cycle is that people got so uncomfortable with the radicalism of Trump that the state went Democrat because the Democrats were offering the more moderate positions, but I don’t think Arizona is necessarily changed into a Democratic state,” said AJHS’s Bell.

Still, the tenuous state of Arizona politics might present an opening for an independent, even if the polling doesn’t yet show it: “If you look historically at Arizona elected officials that have gone to Washington, D.C., many have displayed a great level of independence, and it’s been applauded back home,” said Galindo-Elvira.