House impeaches Trump for a second time in bipartisan vote

GOP Rep. Adam Kinzinger said, ‘I don’t know what the future is, I don't know what that means for me politically, but I’m at real peace right now.’ 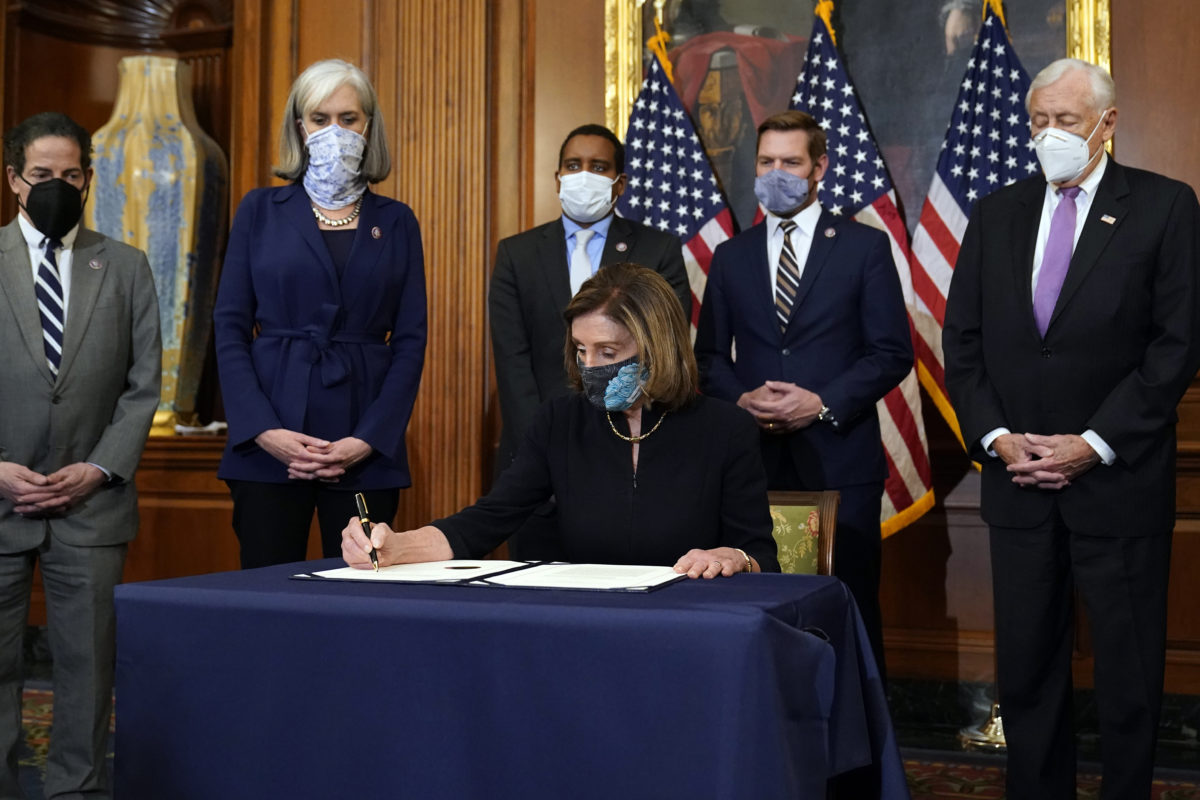 House Speaker Nancy Pelosi of Calif., signs the article of impeachment against President Donald Trump in an engrossment ceremony before transmission to the Senate for trial on Capitol Hill, in Washington, Wednesday, Jan. 13, 2021.

The House of Representatives impeached President Donald Trump by a vote of 232 to 197 on Wednesday afternoon, accusing him of inciting an insurrection at the Capitol on January 6.

“Today, the House demonstrated in a bipartisan way that no one is above the law… that Donald Trump is a clear and present danger to our country and that once again we honored our oath of office to protect and defend the Constitution of the United States, so help us God,” House Speaker Nancy Pelosi said after the vote.

Pelosi added that her “heart [was] broken over what this means for our country.”

Wednesday’s vote makes Trump the first president in American history to have been impeached twice.

Cheney, one of the first Republicans to come out in favor of impeachment and the third-ranking House Republican, is already facing backlash from some Republicans for her vote. Some of the conference’s most Trump-aligned members are pushing for a vote to remove Cheney from her position in the conference.

But Rep. David Cicilline (D-RI), one of the authors of the article of impeachment and a House impeachment manager, told reporters that some Republicans had even deeper concerns about voting for impeachment — “several” Republicans expressed concern for their and their families’ safety if they voted to impeach, Cicilline said before Wednesday’s vote.

After Wednesday’s vote, Rep. Jim Jordan (R-OH), one of Trump’s most vociferous backers in the House, told reporters that the party had expected around 10 to 12 of its members to vote for impeachment and insisted that Trump’s support remains strong and that he will continue to lead the party.

“The American people appreciate that over the past four years, he did more of what he said he would do than any president in my lifetime,” Jordan said.

Some Republicans, like Rep. Nancy Mace (R-SC), who were critical of Trump’s role in the riot, nevertheless voted against impeachment, arguing that the proceedings had been expedited without a proper accounting of the facts.

“The same reason that I voted to certify the Electoral College last week, my guiding principle, the Constitution, is the same reason why I will be voting against impeachment today,” Mace told reporters earlier Wednesday. “What we’re doing now is setting an unconstitutional precedent that there is no due process, no matter how guilty you believe somebody is.”

Rep. Ken Buck (R-CO), one of the leading GOP opponents of Trump’s election challenges, echoed Mace, arguing that “Donald Trump’s policies are very popular in the Republican Party and his personality is not. And I think that is really what this impeachment comes down to,” Buck said.

Cicilline pushed back, emphasizing that Trump will have the opportunity to defend himself in a Senate trial, noting that “there’s no dispute about any of these events” and that “members of Congress were either witnesses or victims to these events.” The president, Cicilline said, is a “clear and present danger” to the country and “must be removed immediately.”

Mace was one of the Republican voices to defend GOP colleagues who’d voted for impeachment. “We should not be silencing voices of dissent,” the South Carolina congresswoman said when asked about criticisms of Cheney. “That is one of the reasons we’re in this today is that we have allowed QAnon conspiracy theorists to lead us… We should not be silencing dissent in this country, ever. That’s part of the American experiment, is the ability to and opportunity to debate ideas, policies, ideology without being silenced, without being personally attacked.”

The South Carolina congresswoman said she supports investigations into members who may have incited violence, calling out “a member of Congress live-tweeting… the location of the speaker of the House” — a reference to freshman Rep. Lauren Boebert (R-CO) — adding that “all options should be on the table for these individuals that promulgated the events that transpired on Wednesday.”

The articles of impeachment will now proceed to the Senate, where a trial is likely to commence after President-elect Joe Biden’s inauguration on January 20. Senate Majority Leader Mitch McConnell (R-KY) announced Wednesday after the House vote that there “is simply no chance” that a trial could be completed before Trump leaves office.

The Senate Majority leader also said Wednesday that he had yet to decide if he will vote to convict Trump — a distinctly different posture than he took on the previous impeachment proceedings in late 2019 and 2020.

Assuming every Senate Democrat agrees to convict Trump, they will still need 17 Republican votes to reach the two-thirds majority needed to convict Trump, if the vote to convict takes place after Sens.-elect Jon Ossoff (D-GA) and Raphael Warnock (D-GA) are sworn in later this month.