The race to succeed Rep. Justin Amash heats up

Get to know the leading candidates, including Democrat Hillary Scholten and Republicans Peter Meijer and Lynn Afendoulis 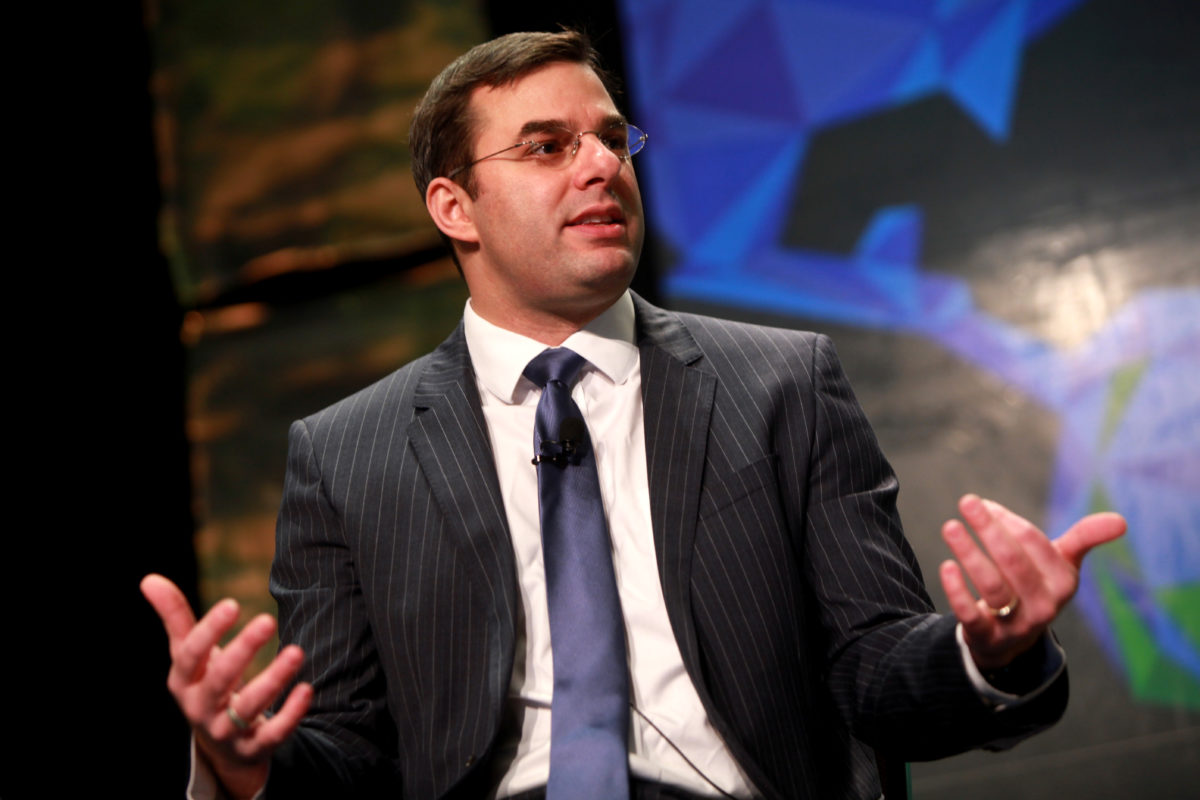 Rep. Justin Amash (L-MI) was once a popular figure in Michigan’s 3rd congressional district.  He represented the district for a decade, winning by wide margins in several elections. Attention turned to the seat in 2019, when Amash announced he was leaving the Republican Party, and intensified when Amash declared a short-lived presidential bid in the spring. In July, he announced he would not seek reelection, leaving both major parties hopeful that they might win the seat.

Even before Amash made his announcement last month, half a dozen candidates had entered the race to represent the district, which is made up of counties in the western portion of the state, including Grand Rapids. With Amash’s departure from the race, the Cook Political Report has pushed the district from “toss-up” to “lean Republican.”

Democratic candidate Hillary Scholten, who served in the Justice Department during the Obama administration, is running unopposed in the primary, and has already picked up the backing of the Democratic Congressional Campaign Committee’s Red to Blue program and JStreetPAC.

But the five-person Republican primary, scheduled for August 4, is a heated competition, with Iraq veteran Peter Meijer — scion of the Midwestern Meijer grocery chain — and State Representative Lynn Afendoulis leading the field.

And as Amash has alienated voters on both sides of the aisle, the leading candidates are taking steps to distance themselves from the congressman.

“I’d rather focus on the future than dwell on the past,” Meijer told JI. “For a lot of candidates, it’s tempting to define themselves based off of being the ‘pro-this’ or ‘anti-that.’ And I’ve always been focused on not defining myself relative to others but saying we need to be looking forward.”

Afendoulis had strong words for Amash, who left the Republican Party last July.

“Justin Amash looks at the role differently than I do,” she said. “He has had a constituency of one. And he has represented his own needs and his own beliefs and his own agenda, rather than the agenda of the district… He has not been able to move the ball forward anywhere because he sees things black and white, and he cannot work with others.”

Although Scholten praised Amash for advocating for Trump’s impeachment, she was skeptical of his overall record.

“I really think that Congressman Amash wasn’t doing enough for our district,” Scholten told JI, pointing to his overall voting record, highlighting his votes against the Affordable Care Act, environmental protections and anti-lynching legislation. “I raised my hand to run because I realized that the congressman was not representing our values on so many crucial issues.”

Meijer is the current Republican frontrunner, according to Michigan State University politics professor Corwin Smidt, although Afendoulis may still have a shot at the nomination.

Meijer and Afendoulis have adopted starkly different tones on the campaign trail. Meijer has avoided the aggressive pro-Trump rhretoric many Republican congressional candidates have embraced this cycle — noting obliquely in a recent interview that “the easiest way to win the primary is the easiest way to lose the general.” This stance, and a past donation to an anti-Trump group, have led Afendoulis’s campaign to label Meijer as a “never Trumper.”

In an interview with Jewish Insider, Meijer pushed back against the attack.

“A lot of those same opponents behind closed doors have accused me of being too supportive of the president and not distancing myself enough,” he said. “So it’s not surprising that folks who are looking for simple political advantage will talk out of both sides of their mouth.”

Meijer leads the field in fundraising, with $1.5 million raised, $325,000 of which is self-funded. Scholten is second, with just over $1 million, but she has nearly $200,000 more in the bank than Meijer at the moment, and outraised all of her Republican challengers in the second quarter. Afendoulis has raised approximately $900,000 overall.

The well-known Meijer name has also been a boon for his campaign, Smidt said. His family’s grocery chain is prominent in the region, and his family is also involved in philanthropic work in and around the district. In his interview with JI, Meijer drew a direct line between the grocery business and Congress.

“The mantra in our company is that the customer’s always right… We want to make sure that we are providing the assortment of items and that level of customer service,” he told JI. “Frankly, I want to do the same thing in Congress. Every stage of this campaign, it’s been a very simple message. It’s been about talking to the community and making sure that we are focused on how to continue to make west Michigan a great and strong place.”

Heading into the general election, Smidt said Meijer’s wealth and fundraising edge could serve as strong assets against Scholten. He added that Amash’s decision not to seek reelection on the libertarian line dealt a major blow to Scholten’s congressional aspirations.

“At first, I thought the advantage would be for Scholten in a three-way race if Amash was going to run as a libertarian. Amash would effectively split the Republican votes among those in the 3rd district who are anti-Trump and those who are pro-Trump,” he said. “I’m not so convinced now that Scholten has as easy of a case now with Amash not running.”

Meijer served as an intelligence officer in Iraq and later worked with an NGO in Afghanistan supporting aid workers within the country. He said his experiences in the Middle East are foundational to his congressional aspirations.

“[I] saw that our political polarization and a lack of understanding of the realities of our conflicts was really hampering our ability to have long-term strategic solutions,” Meijer said. “So I wanted to come back, get more engaged, make sure I could take the experiences that I had in Iraq and Afghanistan… and use that not only to make sure that we as a country are heading on a better path but also return a sense of strong, stable and effective representation to west Michigan.”

His time working in conflict zones also changed his views on U.S. military engagement abroad, making him a committed advocate for ending the wars in both Iraq and Afghanistan.

“I definitely came in as a hawk,” he said. “I came away that, when we lead with a military-first international engagement, it doesn’t make us more secure. It doesn’t make us safer. And it only increases risks and dangers for our allies throughout the world. I want us to be leading with a diplomacy and intelligence-first approach.”

“When I was in Iraq, we were driving around in million-dollar armored vehicles that can be destroyed by a $200 bomb, and I’m tired of American forces being on the wrong end of that cost-benefit equation,” he added.

Meijer also favors a diplomatic approach to the Israeli-Palestinian conflict, with the U.S. acting as a “mediating force,” but stopped short of endorsing any specific plan. “I vastly prefer not to go into any negotiation with a preset outcome,” he said.

He added that he saw the JCPOA nuclear agreement with Iran as “well intended but… very flawed,” and said he personally dealt with the consequences of Iranian hostility while fighting Iranian-backed militias in Iraq.

“We would confiscate artillery rounds that were stamped ‘made in Iran’ within a few months of their production,” he recounted. “[The JCPOA] was too narrowly targeted and was sufficiently toothless to really hem in a lot of the malign foreign influence that Iran has been projecting.”

Afendoulis avoided discussing specifics about the Mideast peace process, saying she needs to study the issue further, but emphasized that she supports a “secure, vibrant Israel.”

Scholten, however, was clear in her support for a two-state solution.

“I think the U.S. should play a role of independent and neutral mediator or arbiter,” she said. “I don’t think the United States should insert itself in a way that puts the thumb on the scale of the very necessary two-state solution process that we need to eventually reach peace.”

In pursuit of that, Scholten said she supports restoring aid to the Palestinian Authority, and did not rule out conditioning or reducing U.S. aid to Israel.

“I think it’s very circumstance-dependent,” she said. “And I think that the United States should continue its very helpful and supportive role to Israel. I think that we absolutely need to make sure that we are continuing to give aid in a way that supports a neutral position and supports and enhances a two-state solution.”

Scholten said she does not support the Boycott, Divestment and Sanctions movement, explaining “it’s very clear the BDS movement has deep roots in antisemitic sentiment and rhetoric.”

The Democratic candidate added that she does not see antisemitism as unique to any particular political perspective, but emphasized that she thinks Trump has stoked antisemitism by aligning himself with domestic extremists.

Meijer agreed that antisemitism appears within fringe political movements of all stripes, but specifically mentioned BDS and Nation of Islam leader Louis Farrakhan as concerning.

Afendoulis emphasized the importance of tough conversations and strong leadership in combating antisemitism and other forms of extremism.