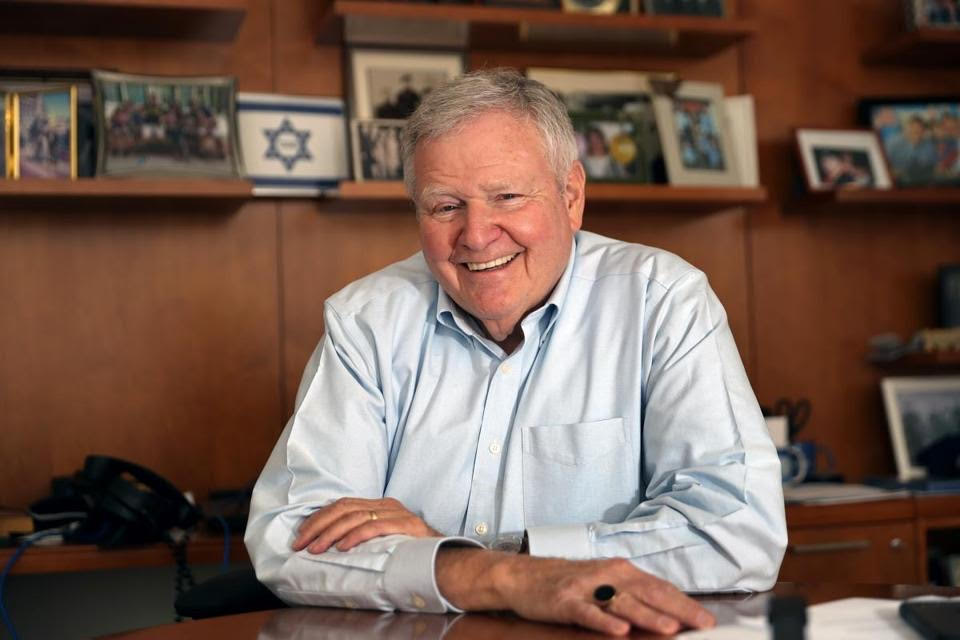 The Senate primary matchup in Massachusetts between Rep. Joe Kennedy (D-MA) and Sen. Ed Markey (D-MA) has made for some curious dynamics. While progressive Democrats are throwing their support behind the 74-year-old Markey, a co-author of the Green New Deal who has held elected office for nearly 50 years, the local pro-Israel community has largely rallied behind Kennedy, the 39-year-old political scion who gave up his seat in the state’s 4th congressional district to run against a member of his own party.

In a recent letter, more than 75 Jewish community leaders in Massachusetts endorsed the young congressman over Markey, though the two elected officials seem to share similar views. “At a time when some work overtime to delegitimize Israel, Joe has been unyielding in making Israel’s case to those who may be reluctant to listen to it,” read the letter, which was published earlier this month. “He has never ducked and run when it comes to support for Israel.”

Barry Shrage, a professor in the Hornstein Jewish Professional Leadership Program at Brandeis University and the former president of the Combined Jewish Philanthropies of Greater Boston, was one of those who signed onto the letter, and in a recent interview with Jewish Insider, he explained his reasons for backing Kennedy.

“I support him because I think that, at the end of this particular era of politics, after the next election, we’re going to be trying to figure out who’s going to lead the Democratic Party into the future,” Shrage said. “I’m 73 myself. I’m not against older people. They’re all great. We’re all great. Baby boomers are my favorite. But on the other hand, the future of the Democratic Party, as everyone knows, is not Joe Biden, it’s not [House Speaker Nancy] Pelosi. These are all fine people, but they’re not going to be in a position to actually lead the party. So the question is going to be, ‘Who is going to lead the party?’”

Shrage is worried that the answer to that question could be such left-wing Democrats as Rep. Alexandria Ocasio-Cortez (D-NY), a rising star who has endorsed Markey and whose political views are inhospitable to Israel. “It troubles me,” Shrage said, pointing out that Markey has also been endorsed by a local nonprofit organization, Massachusetts Peace Action, which supports the Boycott, Divestment and Sanctions movement.

Not that Shrage is implying Markey necessarily holds the same views of those who have backed him. “I’m not saying that’s Ed Markey. I’m not,” said Shrage, who added that Markey has a solid record when it comes to Israel. “But I’m saying that all that support from those places makes me concerned.”

“Whether Markey will feel beholden to them or not, I do not know,” Shrage added. “I assume that he will continue to be a supporter of Israel as he has been in the past. But I still worry about the future of the party and maintaining a bipartisan sense of support for Israel.”

“It’s a big deal for me as a Jewish person,” Shrage concluded.

Though Shrage publicly supports Kennedy, he declined to reveal who he would be voting for in the district Kennedy is leaving behind to run for Senate. (He has donated $350 to local legislator Becky Grossman, according to the Federal Election Commission.) The crowded Democratic primary contest includes nine candidates who are vying to represent a portion of southeastern Massachusetts in Congress.

Shrage believes that most of the candidates would do a fine job representing the 4th district, reserving criticism for Ihssane Leckey, a young progressive who has been endorsed by Jewish Voice for Peace and If Not Now Boston. Leckey, Shrage said, “really doesn’t understand the nature of Israel, its political systems, its strengths.”

A recent poll released by Leckey’s campaign put her in third with 11% of the vote, behind Newton City Councilor Jake Auchincloss at 16% and Grossman at 19%. The numbers suggest that some of the contenders could split the vote, giving Leckey the edge in a packed race.

“There’s no way to know how the vote is going to split,” Shrage said. “The best thing we can do is to make sure that people do come out for the candidate of their choice.”

With that in mind, Shrage said he has been doing his part to educate Jewish voters in the district about their options. He has helped distribute letters to synagogues and Jewish organizations exhorting Jewish community members to participate in online forums so they can decide for themselves who they like.

The hope, he explained, is that even if the vote splits, Leckey will fail to garner enough support to advance to the primary.

“What I want the Jewish community to know is that this is an extremely important race that deserves their time, attention and their engagement in order to make the best possible choice and avoid a situation where a district that’s always been balanced, liberal, progressive and also pro-Israel goes in a totally different direction,” Shrage averred. “It would be, what we used to say in Yiddish, a shanda.”