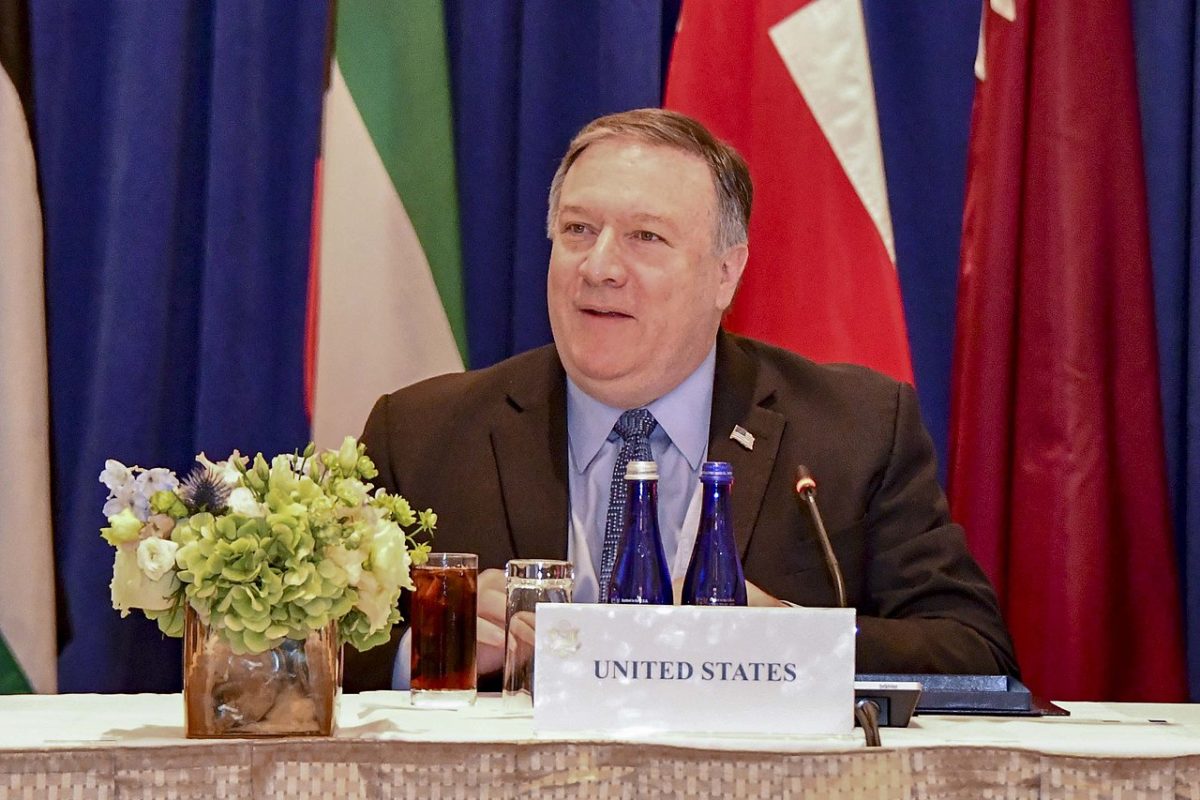 Photo by the State Department

The U.S. has renewed waivers on Iran sanctions to allow Russian, Chinese and European companies to conduct work at Iranian nuclear sites past the March 31st deadline.

Details: The Trump administration’s move to extend the waivers for an additional 60 days will allow nonproliferation work to continue at the Arak heavy-water research reactor, the Bushehr nuclear power plant, the Tehran Research Reactor and other nuclear sites. In a statement on Monday, the State Department focused on the expansion of four “restrictions” on the Iranian nuclear program, reaffirming its commitment to prevent the regime from developing a nuclear bomb.

Palace intrigue: The Associated Press reported on Tuesday that Treasury Secretary Steven Mnuchin “prevailed” in an internal debate with Secretary of State Mike Pompeo, who opposed extending the waivers. Mnuchin maintained that the coronavirus pandemic made revoking the waivers “unpalatable” at a time when the administration is being criticized for refusing to ease economic sanctions on Iran.

Leaving window open: Speaking to reporters at the State Department on Tuesday, Pompeo indicated the administration may reconsider easing some sanctions on the regime to help them fight the virus. “We evaluate all of our policies constantly, so the answer is — would we ever rethink? Of course,” he said.

Shaping the narrative: Patrick Clawson, the director of research at The Washington Institute for Near East Policy, explained that the State Department’s decision to refer to it as a renewal of restrictions “helps them frame the issue for those in the administration who wanted to stop the waivers.”

Same deal, different owner: Richard Goldberg, a senior advisor at the Foundation for Defense of Democracies, described the move as an attempt to preserve the 2015 Iran nuclear deal. “Four years ago the president declared his top priority would be to dismantle the Iran nuclear deal. Four years later, his administration is keeping the deal alive, extending sanctions waivers for key JCPOA projects and refusing to end the deal’s dangerous sunsets at the Security Council,” Goldberg told JI. “At some point, it’s difficult to call it Obama’s Iran deal if the Trump administration adopts a policy of keeping the deal alive. These waivers serve no other purpose than to legitimize an illicit nuclear program and keep our European allies addicted to the old deal.”

American jobs first: Fred Zeidman, a Houston-based GOP donor, told JI that despite being an “unequivocal” proponent of ending all waivers on Iran, he believes that this time the administration made the right decision. “We have so many things right now that are hurting our economy. I think this is the wrong time to do anything that is going to automatically cost Americans their jobs,” Zeidman explained. “I think 60 days is not an eternity.”

Lesser of two evils: Nazee Moinian, an Iranian native and a former consultant to the Council on Foreign Relations, told JI that the waiver extension is “as close as this administration can come to ‘easing’ sanctions without actually handing over cash to the mullahs in Tehran.” At the same time, she said, it “allows breathing room for all parties until the current pandemic scare subsides.” Moinian explained that while the Trump administration would have preferred a continuation of the “maximum pressure” campaign against Iran, defying “Tehran’s temper tantrum or aggressive lobbying in the West,” the rewards of extending the waiver “for all those concerned may outweigh the costs, if any.”

Moving on: Michael Makovsky, president and CEO of the Jewish Institute for National Security of America, tells JI that “ideally, ending the waivers would be valuable. However, in the past year, Iran has succeeded to escalate its nuclear program in some of the areas where waivers have been ended. Thus, ending these waivers absent a strategy that could prevent a likely resulting Iranian escalation doesn’t seem very practical now.” Makovsky suggested that the administration should “broaden pressure against Iran beyond sanctions,” as well as “boost Israel’s capabilities to deter and roll back Iranian aggression through a U.S.-Israel mutual defense pact.”