Ambassador Tom Nides tells JI that the U.S. is concerned over who will be appointed to head the Defense Ministry amid reports that Benjamin Netanyahu's far-right allies are eyeing the post 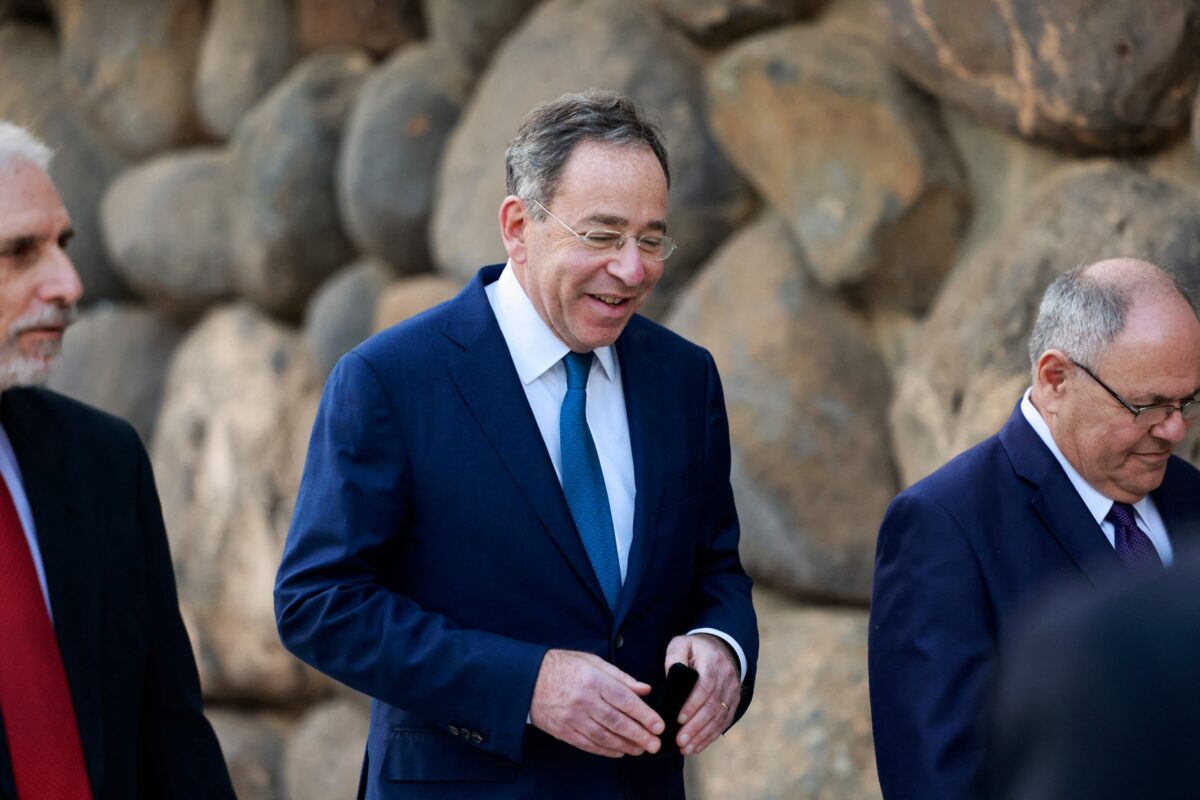 As incoming Prime Minister Benjamin Netanyahu works to form his new government coalition, potentially with some of the most far-right nationalist politicians Israel has ever seen, the Biden administration is watching closely.

At the center of what could become a transatlantic storm sits America’s top envoy to Israel, Tom Nides, who, in the coming weeks and months will be required to maneuver between a new batch of Israeli cabinet members whose views — and actions — could end up clashing head-on with deeply held positions of a Democratic government in the U.S. that was bolstered by the recent midterm elections.

“I’ve now been here for a year now and as I’ve said before, this job is not for the faint of heart,” Nides confessed to Jewish Insider in an interview in his Jerusalem office on Monday. “And given the fact that I’m already on my third prime minister, it’s even stretching my own imagination how complicated this job is.”

According to Nides, who over the past year has made a point of traveling the length and breadth of the country visiting an array of Israeli communities and meeting with representatives from all the various sectors, his job is to ensure that “no one hurts the unbreakable ties between Israel and the United States.”

“I think as the American ambassador, I need to be calm, focused and see how things transpire and then react to those things as they come up,” he told JI. “I think that gives me and this administration credibility and will allow us to push back on the things we care deeply about.”

“I want to be focused, and if we start screaming from day one, then our voice will become less effective,” Nides added.

Last week, State Department spokesperson Ned Price spoke out against one of those possible cabinet members, Knesset Member Itamar Ben-Gvir, after he attended a memorial event for Meir Kahane, the radical New York-born rabbi and also an Israeli legislator who was assassinated for his extremist views in 1990.

“Celebrating the legacy of a terrorist organization is abhorrent. There is no other word for it. It is abhorrent,” said Price during a press briefing, referencing Kahane’s ultra-nationalist Kach party, which espoused anti-Arab and Palestinian sentiments and remains a Specially Designated Global Terrorist (SDGT) organization in the U.S. Kach, and its offshoot, Kahane Chai, are also outlawed in Israel.

Since Israel’s Nov. 1 election, however, local media has been speculating that Ben-Gvir and his political ally, far-right lawmaker Bezalel Smotrich – the two ran a successful election campaign together under the banner of the far-right Religious Zionism faction, receiving the third most votes – are vying for some of the most powerful ministerial positions in Netanyahu’s next government, including the uber sensitive post of defense minister.

“I’m not going to speculate over who will be in the government or what our reaction will be when it happens, but what I do care about are those ministries that we have a very close, interlocking relationship with, in particular, the Defense Ministry,” admitted Nides, who has spoken with Netanyahu several times since the election.

“It’s a critical ministry and I spent an enormous amount of time working with Minister [Benny] Gantz on issues of mutual security and also those relating to the West Bank and Gaza,” he added.

Throughout the past year – in lieu of any peace process between Israelis and Palestinians – the ambassador has worked tirelessly to convince the Israelis to implement a series of goodwill measures aimed at improving day-to-day conditions for millions of Palestinians. Nides emphasized to JI that the role of defense minister was not only about defending the country, but also a job that oversees all of Israel’s policies and actions relating to the West Bank and Gaza.

Among the Palestinian causes championed by Nides so far have been the restoration of aid to Palestinian-run hospitals in East Jerusalem, convincing Israel to enable 4G cellular across the West Bank, which he believes could happen in the near future, and expanding the hours of operation at the Allenby crossing, a crucial gateway for Palestinians to reach Jordan and beyond. Last week, the ambassador visited the crossing as the Israelis piloted a program that would see it open 24 hours a day.

“I am the ambassador to Israel, not the ambassador to the West Bank and Gaza, but I do care deeply about the fate of the Palestinian people,” Nides said. “They understand where my heart is vis-a-vis trying to help them and obviously there is concern [about the future of such projects], but I think we need to just wait and see how it all plays out.”

Despite the rising concerns from both Palestinian and U.S. officials about far-right, extremist politicians being positions of such power, Nides said his orders from Washington were to wait and see what happens over the next few weeks.

“Believe me, we’re not shy about expressing our views and if we believe that Israel is doing things that we believe are not part of our shared values, then we will express our concern,” he stated, adding, “I am confident, however, that the incoming prime minister shares many of our values, and I don’t think he has any interest in seeing things deteriorate in the West Bank.”

Nides also said he did not believe that Netanyahu wanted to see a deterioration in the relations between Israel and the U.S., even though he acknowledged that there might be some in the incoming government who do not have the same priorities.

“Joe Biden has a lot of credibility with the incoming prime minister, they’ve known each other for a long time and that relationship matters,” he continued. “Could there be people in the government who might not have the same priorities? Of course. But we will look towards Prime Minister Netanyahu to steer the ship, and if we believe things are off track, we’ll be more than happy to express our views as we see fit.”

Jonathan Rynhold, head of the political studies department at Bar-Ilan University near Tel Aviv and author of The Arab-Israeli Conflict in American Political Culture, said he did not believe that the close security cooperation between Israel and the U.S. would be affected by the new government.

However, he said, “we can expect a lot more tension and disagreement on anything to do with the peace process with the Palestinians and over the security policy toward the issue of Iran.”

Rynhold also said that any drastic measures altering Israel’s democratic foundations or upsetting the status quo vis-à-vis the Palestinians, such as annexing West Bank territory, could lead to a major crisis with the Biden administration.

“While Democrats have been critical of Israeli policy, their support for Israel as a country has not changed in over 20 years and that is basically because Israel is a democracy,” noted Rynhold. “Were this government to make moves that were understood in the Democratic Party and among Democratic Party supporters as contradicting democracy or the values and principles and norms of democracy, that could have a serious long-term effect.”