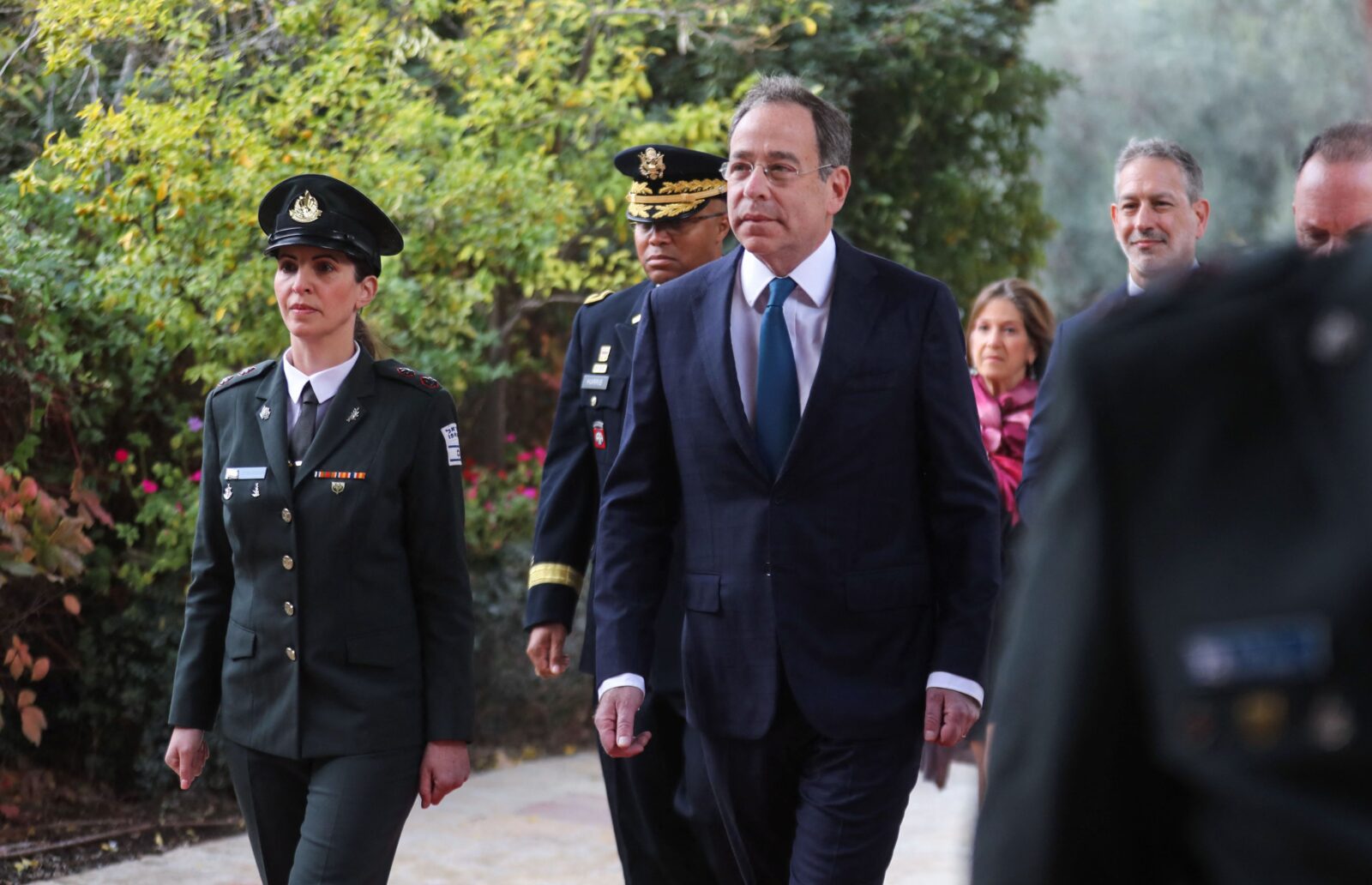 Six months into the job the U.S. ambassador to Israel is on a mission to show America cares

A few days after a Palestinian terrorist opened fire on a Tel Aviv bar in April, killing three Israelis, the U.S. ambassador to Israel, Tom Nides, joined hundreds of mourners in paying his respects to the young victims’ families.

It wasn’t his first set of shiva calls. Nides, who had been on the job for just four months, had already visited the relatives of those killed two weeks earlier in a stabbing and vehicular attack in Beersheva and spent time with families grieving five more people killed in an attack in Bnei Brak, including that of a young Christian police officer from Nazareth. But for Nides, the deadly shooting in the heart of Tel Aviv drove home what it’s like to live in a place embroiled in constant conflict.

“I don’t think people really understand,” Nides told Jewish Insider in an interview last week. “They might read about what happens here in the newspapers, but unless you go to a house in Tel Aviv and sit with the fiancée of the 27-year-old kid who got shot in the bar in Tel Aviv, and you hold her hand and she says to you, ‘I just don’t get it, he just proposed to me three weeks ago,’ … then you really don’t know.”

While it’s not unusual for an American ambassador to pay condolence calls to the families of terror victims, Nides appears to have made it his personal mission. During the most recent wave of violence earlier this spring, the top U.S. diplomat in Israel has met with the relatives of many of the victims killed as a result of the Israeli-Palestinian conflict. Last month, he attended the wake of Palestinian-American journalist Shireen Abu Akleh, who was killed while reporting on clashes between Israeli soldiers and Palestinian militants. The U.S. has called for a joint investigation into her death.

“This is not about me, it’s about America,” Nides told JI. “It’s about showing up and telling people how much we care about them and how much the United States cares about their tragedy.”

Admitting that the condolence calls are among the hardest things he’s ever done, Nides said, “The shiva calls have made what happens here very real to me… it has also made it clear to me that it’s not one particular part of this country that is affected by these attacks.”

“Ninety-nine percent of the people in Israel, the West Bank and Gaza have no interest in causing harm,” he continued. “They just want to live in peace and prosperity, and we cannot let that 1 percent of lunatics ruin it for everyone else.”

Despite the tension and the heartbreak, Nides, a former banker, who was deputy secretary of state for management and resources from 2011 to 2013, said he feels extremely lucky to be serving in Jerusalem and tries to remain focused on his central goal: strengthening Israel’s character as a democratic Jewish state, which also includes working to maintain the concept of a two-state solution for Israelis and Palestinians, while at the same time maintaining Israel’s security.

He’s a supporter of the normalization agreements Israel signed two years ago with the United Arab Emirates, Bahrain and later Morocco and Sudan, despite the fact it was achieved by the previous administration and spends much of his time promoting programs aimed at improving the daily lives of the Palestinian people.

Of the first diplomatic posting for the self-described “little Jewish kid from Duluth, Minnesota,” Nides said, “obviously it’s exhausting but it’s beautiful. I love this place and to wake up and be the ambassador, I mean, how cool is that?”

While “totally humbled by the experience,” Nides said he is determined to get “stuff done” and is trying to “focus on things that I can manage” – not an easy endeavor in a country in constant conflict, with polarizing political and religious communities and flagrant leaders continuously vying to shore up their political support.

“I have no ideology, I just want to do the right thing and I’m trying to send a message to people that I will talk to and see everyone,” he said.

Nides has made a point of meeting with as many people as possible, traveling the length and breadth of the tiny country and hearing out even those who hold views contrary to the U.S. administration that he represents. He excitedly shares many of his interactions in colorful social media posts, including a weekly Shabbat greeting that often highlights peace, tolerance and coexistence.

Coming across as genuinely congenial and warm, Nides, however, upset some Israelis in his first local media interview by stating that as the U.S. envoy he would never visit an Israeli settlement in the West Bank. His comments were in stark contrast with his predecessor David Friedman, who was a strong advocate for Israeli settlements.

“I probably could have been a bit more artful in my words,” Nides told JI of the interview with the Israeli daily Yediot Aharonot. The ambassador’s words drew no small amount of criticism from Israel’s very vocal settler movement.

“I tried to explain that my position is not to do things that agitate people, although I think even by saying that I agitated those who live in the settlements,” said Nides, who has since clarified that he is willing to meet with Israelis from the settlements, but only at his office in Jerusalem.

“Our role here is to make sure the parties [Israelis and Palestinians] don’t do things that make it exceptionally difficult to keep the vision [of a two-state solution] alive,” Nides explained. “I know that’s a lofty, Nobel Peace Prize-winning thing to say, but it’s pretty damn important and it goes for the Israelis, as well as the Palestinians.”

When potentially flagrant or sensitive events do occur, such as the killing of Abu Akleh, an iconic Palestinian voice who covered the West Bank for two decades, or the provocative Israeli nationalist flag marches that took place in the Old City on Jerusalem Day, Nides said he feels confident articulating the views of the Biden administration “in a clear and succinct way.”

Continual meetings and interactions with Israeli officials, he said, have enabled him to forge strong ties here that allow him to “express either my love or displeasure” with what is going on.

On the Palestinian side, in lieu of an official consulate for direct diplomatic relations, which was closed during the Trump administration, Nides said he works closely with the Palestine Affairs Unit in the embassy. The unit will soon have direct access to Washington with the appointment of Hady Amr, the deputy assistant secretary for Israeli and Palestinian affairs, to the role of special envoy to the Palestinians. Amr’s appointment, some believe, is a first step to reversing former President Donald Trump’s approach to the region.

On the specific issue of who killed Abu Akleh, Nides said that there has been progress and that he is working closely with both sides to convince them to collaborate and share evidence.

“Obviously, there’s lots of suspicion between the sides,” said Nides. “But we are trying to be the bridge between the two.”

Even after months of violence and tension between Israelis and Palestinians, and absent moves toward restarting the peace process, Nides said he remains hopeful and has even found small ways to advocate his firm belief in coexistence and peace.

Recently, he brought together two local embassy employees – one a young Jewish-Israeli who was injured during the Tel Aviv bar attack, the other an Arab-Israeli, who also works part-time as a paramedic and who treated the wounded at the bar – to watch the final soccer match of the Israel State Cup.

While at the game, Nides took advantage of his diplomatic status – and his reputation as a friendly, approachable guy – making an impromptu introduction between the two men and Israeli President Isaac Herzog.

Tapping on the glass of the VIP box, he brought the two men over to meet Israel’s top ceremonial leader. “I told the guys, ‘I hate that you got shot and you had to treat victims, but it is kind of cool that you got to meet the president,’” Nides mused, adding, “The whole place, this whole country, is so small. Only 9 million people and everyone’s affected [by the conflict].”