The U.S. special envoy, speaking at a WJC event in France, warned of increasing dangers to Jews worldwide 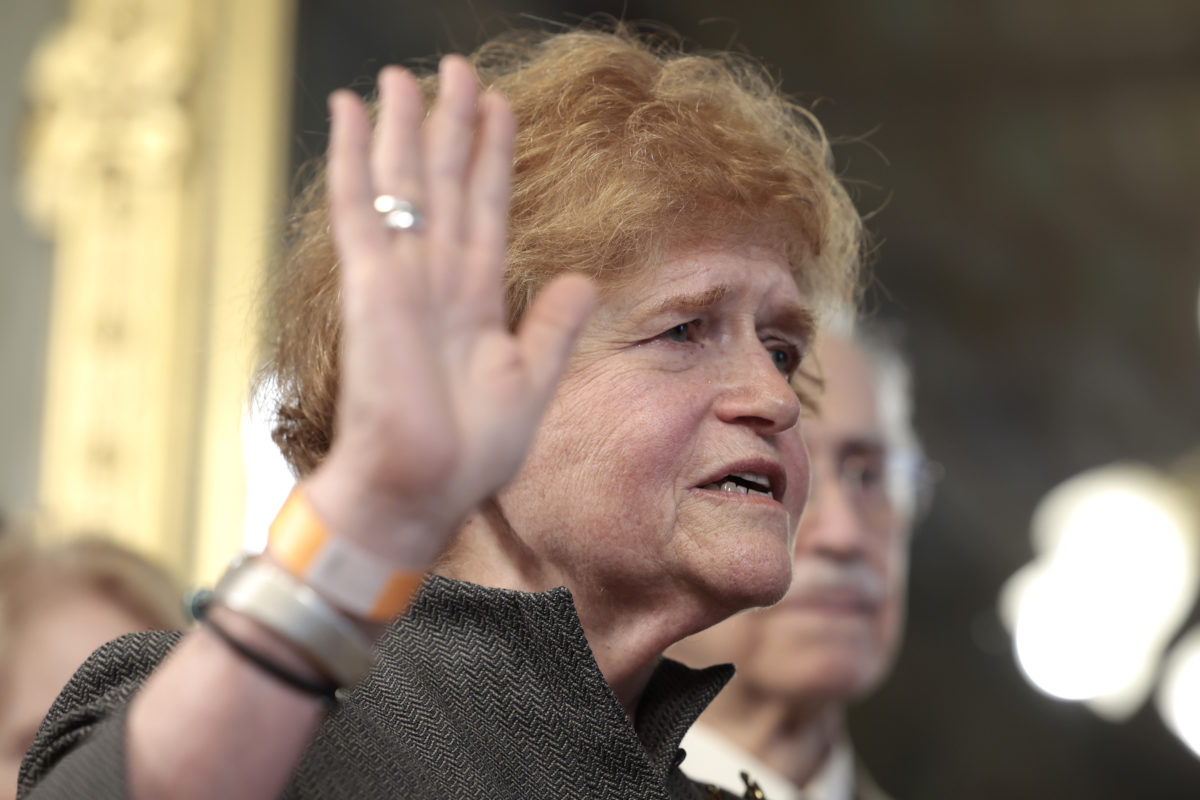 Ambassador Deborah Lipstadt is sworn in by Vice President Kamala Harris in her ceremonial office of the Eisenhower Executive Office Building on May 24, 2022, in Washington, D.C.

Speaking in France on Monday, Ambassador Deborah Lipstadt, the U.S. special envoy to monitor and combat antisemitism, warned of increasing antisemitism and dangers to Jews worldwide, as high-profile incidents of anti-Jewish bias grip the U.S.

“Americans used to think, ‘Oh, this is something unique to France,’” Lipstadt said at an event hosted by the World Jewish Congress, referring to the nation’s recent history of antisemitic incidents and violence. “Whereas if we had had this conversation 15 years ago, I would have said, ‘France is a unique situation.’ Sadly it’s not unique anymore.”

The ambassador also lamented that she has friends on both sides of the political spectrum who are “very astute” at identifying antisemitism among their political opponents but “neither of them seem able… to see the antisemitism next to them.”

Lipstadt linked rising antisemitism to the spread of social media and populism, which she described as rife with “talk of globalists, talk of shadowy figures controlling, sometimes there’s references to George Soros… whom I like to describe as the Rothschilds of the 21st century.”

The Holocaust scholar, who was confirmed to her State Department role earlier this year, said that recent developments have highlighted “the fragility of democracy in the United States.”

“That doesn’t mean we’re facing a coup. Some people sometimes say it’s 1938, and I think that’s kind of a ridiculous or extreme comparison,” she continued. “But it’s very troublesome at the same time.”

Yet, Lipstadt also highlighted positive signs of progress, like the recent Sukkot event at Blair House, across the street from the White House, attended by a number of senior embassy officials from Middle Eastern and South Central Asian countries.

Lipstadt also announced plans for a trip to Morocco next month, and said she had recently attended a European Union conference in Brussels regarding efforts to ban kosher slaughter.

In her time as special envoy, Lipstadt said she’s been surprised at how willing colleagues have been to work with her to incorporate fighting antisemitism into the State Department’s work and ensure that it is not treated as a “niche issue.”

“I thought this part would be a big challenge, convincing colleagues, but I’m pretty much pushing against an open door,” she said. “That has been very empowering.”

She noted that, as a government official, she must be “even more” careful about calling things out as antisemitic than she was in her private life, and that her statements are subject to levels of review and revision from State Department colleagues.

Lipstadt also discussed concerns over the efficacy of Holocaust education as a corrective or disciplinary toool in the wake of wrongdoing, such as vandalism of a synagogue.

“Now maybe [a person] will learn from that the dangers of antisemitism, but I’m not sure it’s the great inoculator that we think it is,” she said. “And yet it is crucially important to teach it.”

She highlighted concerns about the vanishing of first-person survivor accounts, which she said makes memorials, museums and oral histories “all the more crucial.”

“But they’ve got to be taught in a context of the facts, but also how the Shoah began with words. The Shoah did not begin with the Third Reich, with Hilter and those around him, expecting that they would be able to do what they did,” she continued. “It moved, testing, getting bigger.”

“You look at any genocide, it begins with words,” she said. “I think our challenge is to not wait until it’s a genocide to try to stop a genocide. Once it begins, it is virtually impossible. It calls upon us to find ways to react… even to small acts of antisemitism.”

Asked by an audience member whether Americans are fully cognizant of the engrained antisemitism in “some religious agendas,” like those of the Muslim Brotherhood, Lipstadt said she would not speak specifically to the issue, but empahsized that the State Department “recognizes… the dangers of the kind of extremism that you’re speaking of.”

She added that she’s been emphasizing these dangers in her work, including in her visit to Saudi Arabia, noting that this sort of ideology also “foments fear and hatred of Muslims.”

Lipstadt did not directly address specific recent incidents, aside from questioning why Iranian Supreme Leader Ali Khamenei is allowed to remain on Twitter.