Robert Zimmerman, a Democratic National Committee member, has the best shot at advancing to the general election, observers predict 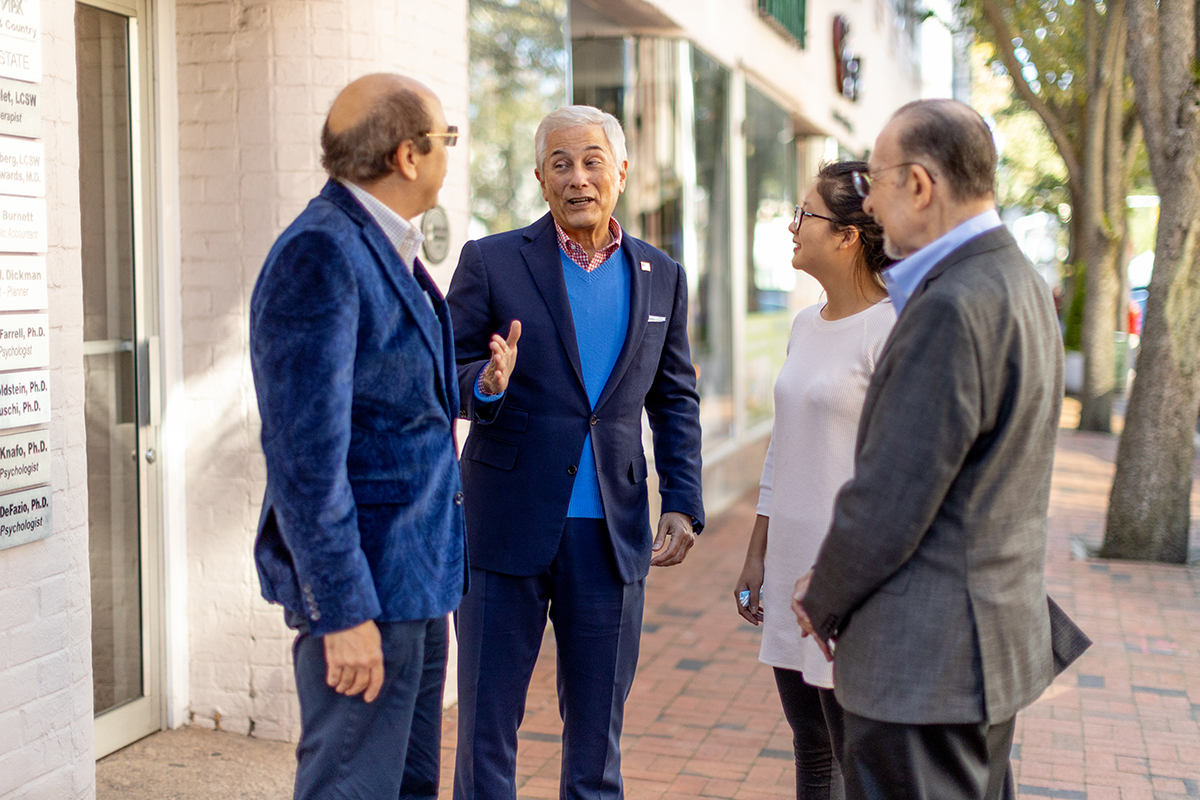 In the crowded race to succeed outgoing Rep. Tom Suozzi (D-NY), three Jewish Democrats are battling it out in a hotly contested five-way primary for a newly drawn Long Island congressional seat that Republicans are eyeing as competitive in November.

With no independent polling and little to no coverage from national media outlets, the race remains hard to predict as voters head to the polls today, even if experts who spoke with Jewish Insider generally agree that Robert Zimmerman, a Democratic National Committee member mow mounting his first bid for Congress, has the best shot at advancing to the general election.

Rounding out the field are Reema Rasool, a long-shot local businesswoman, and Melanie D’Arrigo, a progressive activist who has gained support from the left-leaning Working Families Party and Our Revolution.

Zimmerman, for his part, is the establishment favorite, with endorsements from former Secretary of State Hillary Clinton and several members of New York’s congressional delegation, including Reps. Ritchie Torres (D-NY), Grace Meng (D-NY) and Gregory Meeks (D-NY), among others.

Meanwhile, he has embraced a mainstream progressive agenda that promotes the Green New Deal and Medicare for All as well as legislation that would prohibit discrimination based on sexual orientation and gender identity.

In an interview with JI, Zimmerman, who would be the first openly gay member of Congress from Long Island, emphasized that his long-standing support for Israel extends, in part, from an appreciation for what he described as its strong record on LGTBQ rights, in stark contrast with countries across the region. “In Iran, they publicly hang members of the LGBTQ-plus community from a crane,” he said. “Tel Aviv holds one of the largest gay pride parades in the world.”

“Israel has always been a beacon of progressive values,” Zimmerman added. “Of all the countries in the Middle East, Israel is the only democracy, protects free speech and freedom of religion, and holds free and fair elections.”

“Zionism,” he explained, “is a point of great personal pride to me.”

His Jewish rivals have also described a personal connection with Israel that informs their Middle East foriegn policy approach.

Lafazan, 28, would be among the youngest Democrats in the House if he is elected. He boasts support from Suozzi, who vacated the seat for a failed gubernatorial bid, and a political action committee funded by the cryptocurrency billionaire Sam Bankman-Fried that has dropped more than $700,000 into the race.

The Long Island legislator has, like Souzzi, been characterized as a moderate. He previously ran on the Conservative Party line, an affiliation Zimmerman has criticized, and registered as a Democrat last year, just before he announced his bid for federal office. Lafazan has pledged to replace Suozzi on the bipartisan Problem Solvers Caucus.

While his campaign no doubt gained some institutional credibility from Suozzi’s imprimatur, Ross Wallenstein, a Democratic strategist who worked briefly for Lafazan’s campaign and is friendly with Zimmerman and Kaiman, questioned whether the retiring incumbent continues to hold meaningful sway in the district he recently lost during the gubernatorial primary. The high-profile supporters who are backing Zimmerman, on other hand, may represent a stronger show of force, according to Wallenstein.

With turnout expected to be abysmal in the late-summer race, however, Wallenstein speculated that low voter enthusiasm could result in a “jump ball” between Zimmerman and Lafazan that will ultimately be decided by who is more capable of motivating base support.

Internal polling from the Zimmerman and Lafazan campaigns, released earlier this summer, suggested a closely fought race whose winner could prevail with only a small plurality of the vote.

Hank Sheinkopf, a veteran Democratic strategist, said his odds are on Zimmerman, owing in part to his decades-long presence in the district. “You have to give Zimmerman the edge,” Sheinkopf told JI. “He’s run a good campaign, he’s raised the money, he’s the darling of the insiders.”

A Democratic organizer who is familiar with the race, however, described a “true toss-up,” predicting a possible outcome in which Zimmerman and Kaiman “split their voter bases” as Lafazan “barely” ekes out a win.

Kaiman is also pursuing a more centrist lane. He supports, among other things, “universal access to health care” but is opposed to Medicare for All “and the end of private health insurance,” as he writes on his campaign site. Last month, Kaiman spoke out in defense of AIPAC after Bill de Blasio, the former mayor of New York City who was then running for Congress, denounced the efforts of a newly created super PAC affiliated with the pro-Israel lobbying group.

He has pulled in $644,000, according to the latest filings from the Federal Election Commission.

Notwithstanding some ideological differences among them, Zimmerman, Lafazan and Kaiman are broadly aligned with regard to Middle East policy. On their campaign sites, each has made sure to highlight support for Israel, an issue of particular relevance to the sizable population of Jewish voters who live in the district.

They all oppose the Boycott, Divestment and Sanctions movement, for instance, and endorse the continuation of U.S. security assistance to Israel.

Lafazan writes on his campaign site that “the safety and security of Israel” is “an issue of utmost importance,” while touting his efforts to counter BDS, which he calls “antisemitic,” by “preventing supporters” from “receiving government contracts through Nassau County.”

Zimmerman said he is “very much in favor of upholding” the $38 billion in U.S. aid to Israel guaranteed in a 10-year memorandum of understanding between the two countries and signed during the Obama administration. “I think this movement to undermine it, to make aid to Israel negotiable or contingent,” he told JI, “is very, very dangerous.”

Each candidate also advocates for a two-state solution to the Israeli-Palestinian conflict and believes in expanding the Abraham Accords, the bipartisan congressional caucus of which Kaiman has pledged to join.

“A signature priority of my service as a congressman will be to support the State of Israel as an ally, the sole democracy in an unstable region, and the home of the Jewish people,” Kaiman wrote in a candidate questionnaire recently solicited by the Jewish Community Relations Council of New York.

Even as such views are consistent with mainstream Democratic opinion, the three Democrats have otherwise distanced themselves from the Biden administration in expressing strong reservations over its continued effort to negotiate a return to the Iran nuclear deal.

In the JCRC-NY questionnaire, which includes responses from each of the five candidates, Lafazan characterized the initial agreement brokered by the Obama administration in 2015 as “inherently flawed,” arguing that “the entire Iran deal must be renegotiated to prevent the possibility of an Iranian State with nuclear capabilities.”

Kaiman, in his response, said he viewed the initial deal as a “mistake” and believes it “has already become moot,” though he also criticized former President Donald Trump’s decision to unilaterally withdraw from the agreement in 2018. He now supports a “far reaching agreement with Iran that is ‘longer and stronger’ than the previous agreement, one that would have bipartisan support.”

The former town supervisor has expressed an alignment with Sen. Bob Menendez (D-NJ), the powerful chairman of the Senate Foreign Relations Committee, who is among the most vocal Democratic critics of the deal.

“I tend to agree with the policy doctrines of Senator Menendez on this issue,” Kaiman wrote. “I also support maximum sanctions directly and through our allies and strategic partners along with other creative regional solutions that are emerging through the negotiation process.”

Zimmerman publicly opposed the Iran deal in 2015, taking issue with, among other things, the so-called “sunset clauses” that would ultimately permit Iran to resume nuclear enrichment after a time-limited period of compliance. He endorsed the imposition of economic sanctions, which were lifted in the original deal, as a vital tool to bring Iran into more serious negotiations.

Speaking with JI, Zimmerman said he is skeptical of what he has heard about renewed discussions with Iran, even as they remain ongoing. “I’ve got enormous objections and concerns about it,” he said. “When it’s proposed, I’ll review it at that time.”

Rasool has also voiced concerns over rejoining the Iran deal, while D’Arrigo supports the negotiations. Meanwhile, D’Arrigo has argued that U.S. funding to Israel “should be earmarked to security needs” and “excluded from use in the occupied territories,” according to the questionnaire. Rasool supports “providing aid and assistance to Israel when needed.”

D’Arrigo, who unsuccessfully challenged Suozzi in 2020, will be on the November ballot regardless of the primary results because she has picked up the Working Families Party line.

The nonpartisan Cook Political Report rates the new district, which leans slightly less Democratic than its previous iteration, as a toss-up in the general election.

George Devolder-Santos, the presumptive Republican nominee, has outraised the leading Democrats in the race, with a $2 million war chest buoyed by a $580,000 personal loan. He was sitting on more than $850,000 at the beginning of August.

Even amid an unfavorable national political environment for Democrats, the reconstituted Long Island district is one that Jake Dilemani, a Democratic strategist in the New York office of Mercury Public Affairs, expects will remain blue, despite what he characterized as a “marginal seat.”

“Whoever the Democratic nominee is needs to treat it as a serious race,” he told JI, “because it is by no means a slam dunk district for anyone.”