Pro-Israel PACs are being held to a different standard, Adam Hollier argues

‘Other single-issue PACs are not treated’ like AIPAC and UDP have been, the Michigan congressional candidate tells JI 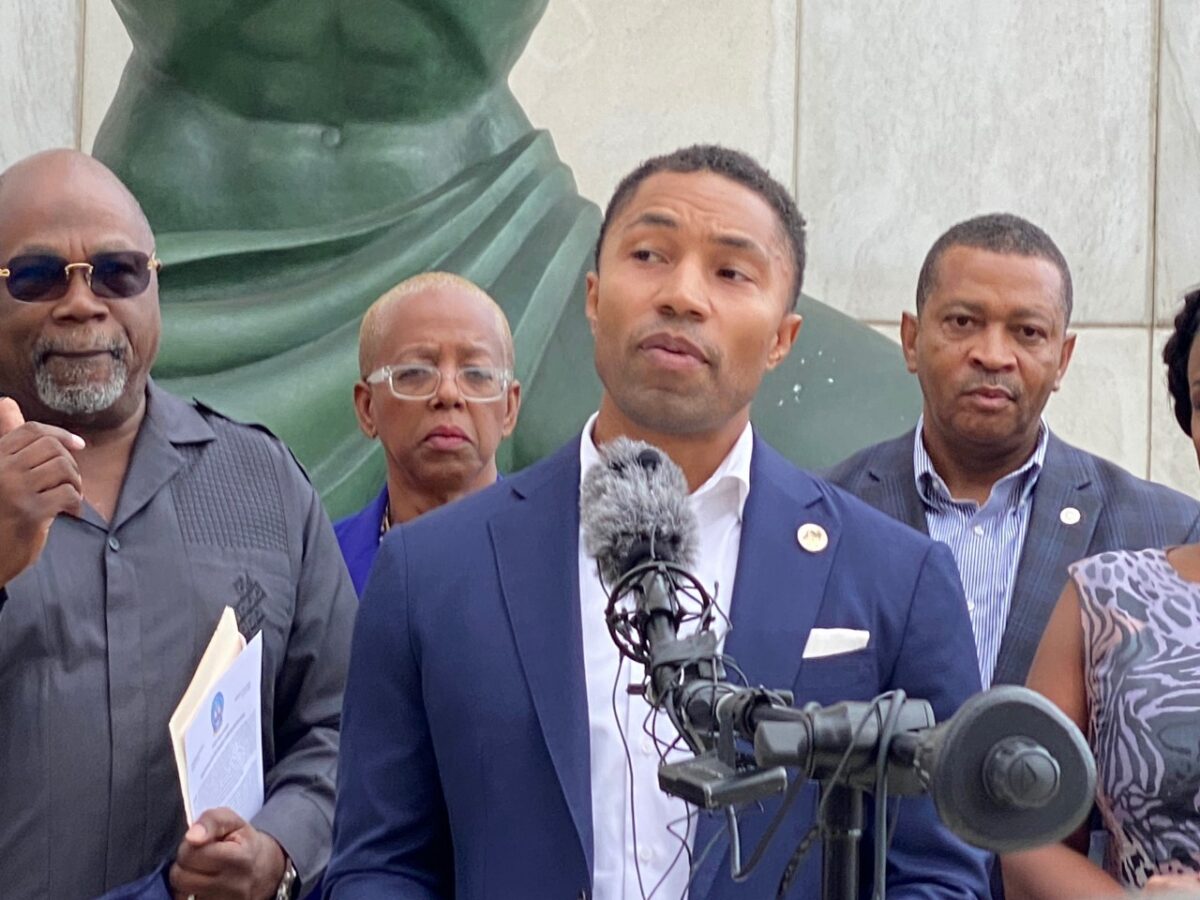 DETROIT — Michigan state Sen. Adam Hollier (D-MI), who has benefitted from outside spending from the AIPAC-affiliated United Democracy Project (UDP), told Jewish Insider on the eve of Primary Day, that he feels pro-Israel groups are being unfairly singled out and held to a different standard by Democratic critics.

Hollier is among the top rung of candidates in Michigan’s 13th Congressional District, alongside state Rep. Shri Thanedar, a multimillionaire entrepreneur who has drastically shifted his positions on Israel heading into the race, and nonprofit CEO Portia Roberson.

The millions in outside spending in the race supporting Hollier — United Democracy Project has spent more than $4 million, in addition to $1.1 million from Protect our Future, the super PAC backed by crypto billionaire Sam Bankman-Fried, and more than $750,000 from VoteVets — have not matched Thanedar’s own spending, Hollier noted. Thanedar has put more than $8 million into his own campaign.

“The pro-Israel community has not outspent anyone,” he said, distinguishing his race from others where UDP has been spending. “This is not something where they have come in and tipped the scale in some crazy way. If anything, they’ve only come in and allowed it to be a little bit more equitable.”

Nevertheless, he said he’s been stunned by the volume of outside spending in his district.

“I woke up one day and saw an outswell of support, and it was like a little kid on Christmas,” Hollier said. “I could never have imagined that that was going to be the case, and I was super grateful.”

Hollier told JI he feels the pro-Israel community is being unfairly singled out for its spending and held to a different standard than other interest groups.

“When people complain about what it might mean — no one asked me for anything,” he emphasized. “There was no oath or pledge or promise… People ask me honestly how I feel about the relationship between the U.S. and Israel, and folks want to support me because I honestly feel the way that I do about the strategic relationship.”

Hollier also pushed back on criticisms of UDP and other pro-Israel groups for failing to bring up Israel issues in their advertising.

“You’re not talking about Israel when you critique them, you are calling them Republicans, when there are lots of Democrats involved,” Hollier said.

Hollier said that Israel rarely comes up while he’s on the campaign trail, although he has heard from potential voters who are concerned about his position on Palestinian rights because of AIPAC’s support for him.

“A lot of them are like, ‘Hey, you’re a monster, I can’t believe that you feel that way,’” Hollier recounted. “And I think that’s the most frustrating part about this space because it’s become so polarized, people don’t want to talk about it. They believe that because I’ve got the support of a pro-Israel group, that it means XYZ about how I care, how I interact with Palestinians. I think that is fundamentally the problem. There’s so many people who don’t want to talk about these issues, who are unwilling to listen.”

In heated conversations about Israel, Hollier said he still tries to keep an open mind.

“It’s got to start with listening and showing that I’m open to winning. Because I’m not convincing someone that I’m right or they’re wrong about something that has been being fought for 100 years today,” he said. I’ve got to show them I’m willing to listen to their perspective and hear them and learn.”

Headed into Tuesday’s primary, Hollier said he’s confident he’s gotten his message across to voters in the 13th Congressional District.

“The question on this race is all about resources and the ability to get my message to voters, and whether or not they can hear it,” Hollier told JI. “I think, thanks to all the support, people have heard my message. I was joking with a friend… that people can pronounce my name better in Southgate and Wyandotte than some people I went to high school with or members of the legislature.”

“I feel like I’ve done everything that I could,” Hollier said, speaking to JI on the lawn of the Chabad of Greater Downtown Detroit, whose rabbi is a friend of Hollier’s. “I raised just about everything that I hoped to raise… we’ve knocked over 40,000 doors, we’ve made almost 300,000 phone calls to primary voters.”