The administration is not moving toward terminating talks with Iran, Sen. Bob Menendez told Jewish Insider 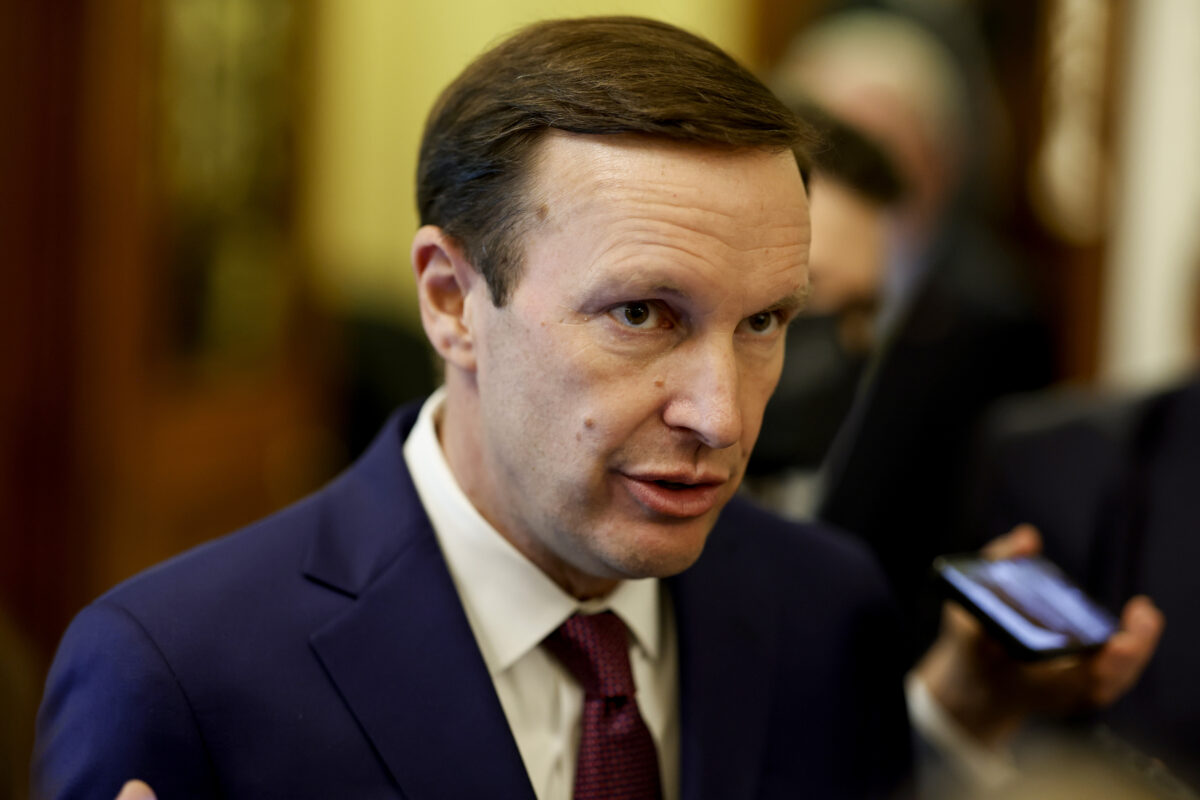 Sen. Chris Murphy (D-CT) speaks with reporters following a news conference after a policy luncheon with Senate Democrats in the U.S. Capitol Building on June 14, 2022, in Washington, D.C.

A classified briefing on Wednesday between Biden administration officials and members of the Senate Foreign Relations Committee left many legislators pessimistic about the state of talks, which have been stalled for several months.

“In fairness to the administration, their view is they’re having no talks. They haven’t had talks since March. So for all intents and purposes, there are no talks,” Menendez told Jewish Insider after the briefing. “The question is whether leaving the door open to the potential deal… is that something that’s desirable as a strategic position.”

Menendez told reporters to “stay tuned” when asked whether the administration plans to impose additional sanctions on Iran targeting its nuclear program. Politico reported on Wednesday afternoon that officials said in the briefing they are considering increasing sanctions on the regime.

Sen. Chris Murphy (D-CT), one of Congress’ loudest proponents of the Joint Comprehensive Plan of Action (JCPOA), appeared increasingly pessimistic about the chances for the U.S. to reenter the deal.

“Obviously the chances of a breakthrough are much smaller today than they were six months ago,” Murphy told JI, when asked if he felt the administration remains committed to the talks. “I still don’t see any path to protecting the region from a potentially nuclear-armed Iran other than diplomacy.”

In response to the same question, Sen. Chris Van Hollen (D-MD), said, “I hope so,” noting that U.S. negotiators have remained at the table despite calls to end the talks.

“We want to make sure that we get an agreement, but on our terms,” Van Hollen said. “I think it’s still a possibility and I think the Iranians have some tough choices to make.”

One of Iran’s primary demands has reportedly been removing the Islamic Revolutionary Guard Corps’ designation as a foreign terrorist organization, an option the Biden administration has ruled out. “[Administration officials are] the ones at the table, so I think they’re in the best position to determine what’s the decision we should make,” Van Hollen added.

Sen. Marco Rubio (R-FL) told reporters that he feels that Iran will eventually become a nuclear power regardless of whether an agreement is reached.

“I think the question with a deal is whether they’ll have more money to do it faster,” Rubio said. “There may not be a way to keep a government that’s determined to build a nuclear capability from acquiring it eventually. Unfortunately, that’s the real world that we live in.”

Sen. Chris Coons (D-DE), a close ally of President Joe Biden who was described last year as his “shadow secretary of state,” told reporters that Iran’s demands in the talks and the regime’s public actions “are gravely concerning, and I’m not optimistic about the path forward.”

Sen. Ed Markey (D-MA) told JI that he is “hopeful” that there could be a breakthrough in the talks.

At a public hearing earlier this month, senators pressed Iran Special Envoy Rob Malley for more details on the administration’s fallback strategy if nuclear talks fail. Legislators were divided over whether the administration had articulated such a plan.

Sen. Ben Cardin (D-MD), who is opposed to JCPOA reentry, called the briefing “one of the more informative and significant classified briefings” and said that the committee “got information as to the different options that are available.”

Van Hollen, citing public reports, argued that a so-called Plan B “always included lots of different elements,” including a military option — ”we’ve never taken that off the table” — but “would likely result in a lot of Americans getting killed in the region and would not stop Iran from a decision to move forward with a nuclear weapons program. It would be a temporary setback.”

But Rubio and Cruz said they had not heard any alternatives to JCPOA talks from the administration.

“I don’t think they have a Plan B, certainly not one that’s been shown to us,” he said.