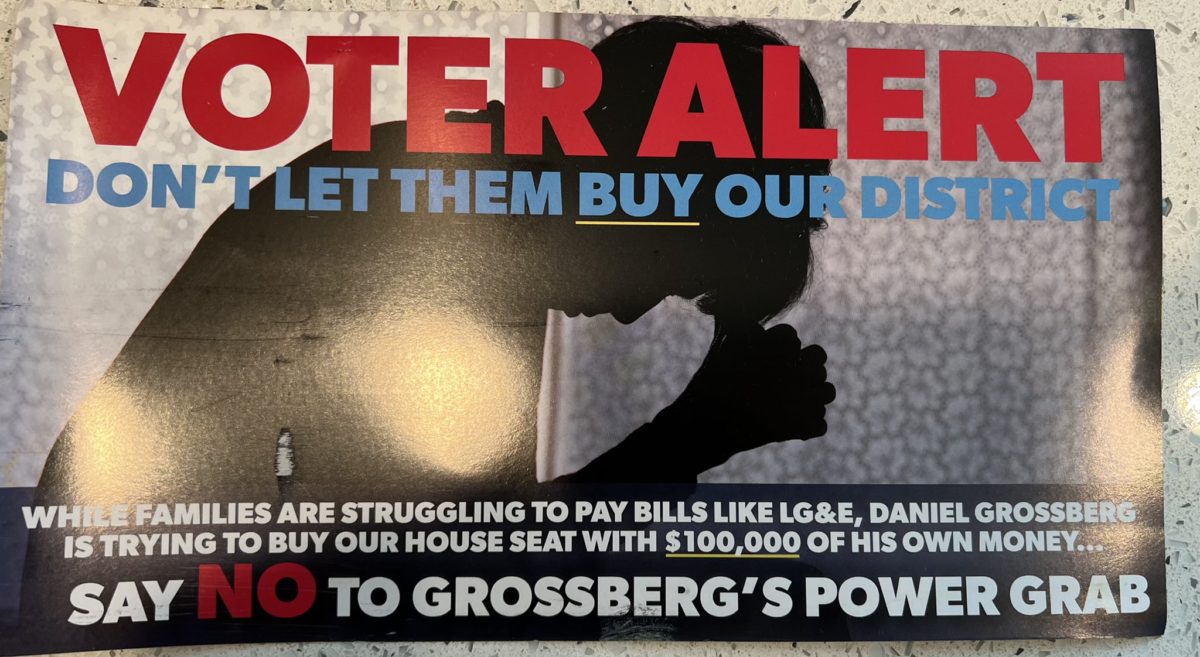 A Jewish candidate for the Kentucky state legislature is alleging his opponent invoked antisemitic tropes in a campaign mailer that accused him of attempting to “buy” the district for his own “interests.”

The mailer, distributed by longtime state Rep. Tom Burch, targets Democratic primary challenger Daniel Grossberg, a Jewish political activist who also ran for the state House in the 2020 election. The campaign material, first shared by a Louisville Courier-Journal reporter on Wednesday, is headlined “VOTER ALERT” and “DON’T LET THEM BUY OUR DISTRICT.” It goes on to allege “Daniel Grossberg is trying to buy our House seat for his own interests with $100,000 of his own money.”

The mailer does not specify to whom “them” refers, nor what personal “interests” Grossberg is pursuing. In a brief call with Jewish Insider on Thursday, Burch — the longest-serving lawmaker in Kentucky history — said he did not see “anything derogatory” in the mailer, and requested that specific questions be sent to him by email. He did not respond to those questions.

“I was completely shocked by it,” Grossberg told JI. “We were expecting an attack, but I wasn’t expecting him to go so low as to lean into one of the most famous of the antisemitic tropes, the whole concept of replacement theory, the theory that the Jews are taking over, that we’re buying away the power and influence of the White Anglo Saxon Protestants.”

Grossberg said his phone has been “blowing up” with messages from people in the district “outraged by what they saw.”

Grossberg told JI he is running for the seat because “we don’t have representation,” accusing Burch of frequently failing to attend votes in Frankfort, the state capital, meet with constituents or conduct constituent services.

“I don’t know what personal gain I could have for being in a super-duper minority in Frankfort,” Grossberg said. “As it stands right now, there are 25 Democrats to 75 Republicans. That will probably only get worse. So the claims of personal interest are a little bizarre from someone who is collecting a fat paycheck on the public tax rolls without even showing up for work.”

Burch did not respond to the accusations of absenteeism.

AJC U.S. Director for Combating Antisemitism Holly Huffnagle said in a tweet, “This type of language, blaming Jews for grabbing power through money, is dangerous. Rep. Burch should know better than to wade into these troublesome waters.”

The Kentucky Jewish Council, chaired by Rabbi Shlomo Litvin, tweeted on Thursday that the mailer was “absolutely shocking,” adding “[a]ccusations of ‘Them’ buying our elections is a transparent antisemitic trope, and the segregation of the Jewish candidate is reminiscent of the cries of ‘Jews Will Not Replace Us,’” a slogan employed during a neo-Nazi march in Charlottesville in 2017.

Kentucky’s local political arena has been plagued by a string of antisemitic incidents in recent months. Louisville mayoral candidate Craig Greenberg, who is Jewish, was shot at by an activist who appeared to have ties to a Black nationalist group with ideological links to the antisemitic Black Hebrew Israelite movement. Greenberg was subsequently the subject of memes depicting him with horns, showing him surrounded by money and picturing him alongside a Jewish bank president.

Rep. John Yarmuth (D-KY), who is Jewish, addressed the images in a recent local event, saying, “I don’t think there’s any question” those memes depict antisemitism.

In February, two Kentucky state legislators used the phrase “Jew them down” during a state House debate. A week later, another state representative claimed that an abortion medication was the same drug as Zyklon B, the gas used by the Nazis to kill millions of Jews during the Holocaust, and that the drug had been developed by a Jewish person. The representative also made claims about the sex lives of Jewish women. All three legislators subsequently apologized.

On the federal level, Rep. Thomas Massie (R-KY) has also faced accusations of antisemitism for comparing vaccination madates to the Holocaust and referring to AIPAC as “foreign interference” in U.S. politics.