Across a range of issues, the UAE and Israel are increasingly in the same boat 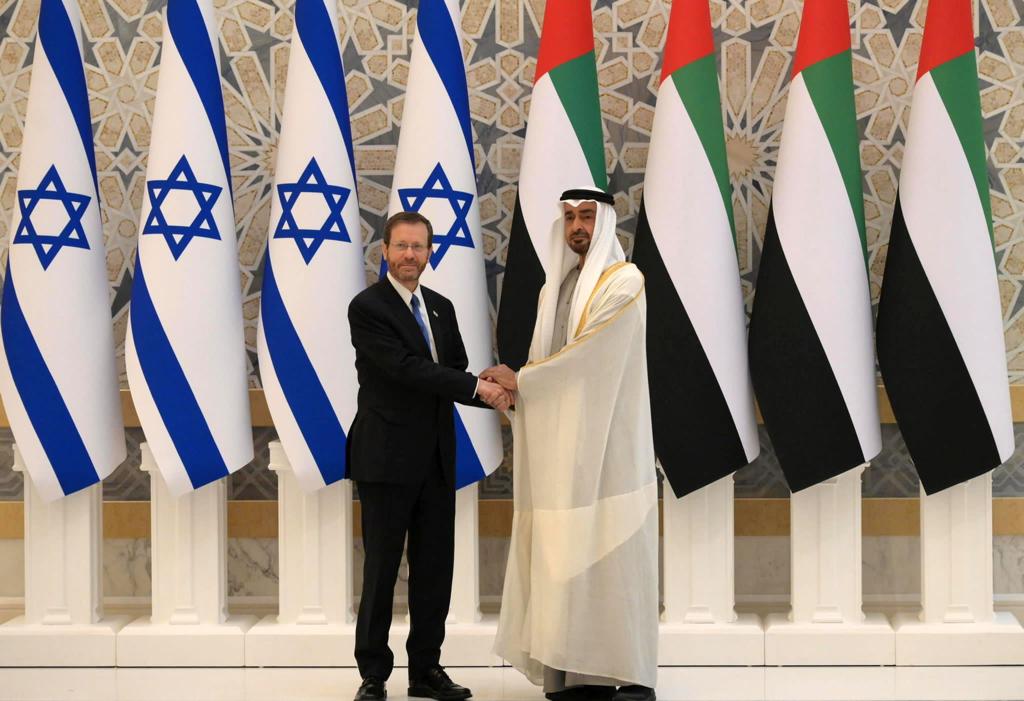 Following a series of Houthi drone attacks against civilian targets in the United Arab Emirates in recent weeks, the country’s newest ally has pledged to come to its defense in the face of attacks from the Iranian proxy.

“We completely support your security requirements,” Israeli President Isaac Herzog told Abu Dhabi Crown Prince Sheikh Mohammed bin Zayed Al Nahyan in a Monday meeting during Herzog’s first visit to the Gulf nation, according to comments released by Herzog’s office. “We are here together to find ways and means to bring full security to people who seek peace in our region.”

Israel’s show of support for the Emiratis amid the Houthi attacks marks a shift that has occurred in Washington, too. While the signing of the Abraham Accords brought about a regional realignment, the normalization agreements also changed the calculus among the countries’ representatives in Washington and the way they approach U.S. policymakers.

“There has been discussion in a way that never existed before. There are parallel interests and joint interests, so I’ve gotta believe — I know that there is consultation,” said a D.C.-based foreign policy professional who is in frequent contact with both Israeli and Emirati diplomats, as well as American national security officials.

In the turbulent waters of the Middle East, Israel and the UAE increasingly find themselves in the same boat. But before the Houthi attacks, those boats were traveling at different speeds: Both countries face a shared threat from Iran, but the nature of that threat, and how each responds to it, is different. But the attacks on the UAE could change things.

Senior Emirati and Israeli leaders advocated this week for Washington to redesignate the Iran-backed Houthis as a Foreign Terrorist Organization, which would make it easier to sanction the rebels. Emirati Ambassador to the U.S. Yousef Al Otaiba and Lana Zaki Nusseibeh, the UAE’s ambassador to the United Nations, called for the change in a Wall Street Journal op-ed published on Monday seeking a tougher U.S. response to the attacks. Israeli Foreign Minister Yair Lapid told Axios on Wednesday that Israel also supports the redesignation.

President Joe Biden removed the designation weeks into his presidency in the hopes that it would bring the Houthis to the negotiating table and make it easier for humanitarian relief to enter Yemen.

After the first attack more than two weeks ago, which killed three civilian workers in Abu Dhabi, Biden said the possibility of adding the Houthis to the list of FTOs is “under consideration.” On Wednesday, State Department spokesperson Ned Price said the Biden administration is considering possible actions. “I suspect we will be in a position to take additional action given the reprehensible attacks that we’ve seen emanate from Yemen from the Houthis in recent days and weeks,” he told reporters.

Rep. Cathy McMorris Rodgers (R-WA), a co-chair of the Abraham Accords Caucus, said the Houthi attacks “are an attempt to jeopardize the progress made between Israel and UAE towards peace, and they warrant a swift response.”

“Since being delisted [as a Foreign Terrorist Organization], the Houthis have rejected good-faith efforts towards diplomacy and targeted innocent civilians in the region,” the Congresswoman told Jewish Insider. “President Biden should immediately reverse the dangerous decision to delist the Houthis as a terrorist organization.”

Not everyone in Washington agrees that the FTO designation is the right move. Sen. Jack Reed (D-RI), who chairs the Senate Armed Services Committee, called the strikes “a very dangerous turn of events,” given that the UAE had previously withdrawn from Yemen.

Reed added, “We just have to make more of an effort to try to stop the humanitarian crisis. And I think the designation [of the Houthis as a Foreign Terrorist Organization] is not as critical at the moment as taking positive actions to stop the violence.”

Reed also said that he could be supportive of sending defensive aid, such as an Iron Dome missile-defense battery, to the UAE should the UAE request it. “I think defensive weapons systems are important. Dubai International Airport is one of the most significant transportation centers in that area that could be threatened,” he told JI.

Israel and the UAE’s shared attitudes toward the Biden administration are due, in part, to the reality of Washington pulling back from the Middle East to focus on other threats, such as China and Russia.

“The single most important factor that’s driving the largest number of decisions in the region by the widest number of actors is — and has been for a number of years now — widespread perception of American withdrawal,” said William Wechsler, senior director of the Rafik Hariri Center and Middle East programs at the Atlantic Council.

During a public conversation on Thursday, CENTCOM Commander Gen. Kenneth McKenzie, who oversees U.S. military operations in the Middle East, agreed that American priorities have shifted to other parts of the globe. But he insisted that the U.S. will continue to come to the need of allies in the Middle East.

CENTCOM’s “force structure,” or military capability, has been reduced “because we face grave threats from China and from Russia,” said McKenzie. But he insisted that the U.S. will continue to assist the UAE and other regional allies in the face of attacks even as Washington’s focus has shifted.

“I think our role, and my role in particular, is to provide that assurance that the United States will be there for them, because I think when it’s all said and done, everybody wants the United States to be there,” McKenzie said at Thursday’s virtual event hosted by the Middle East Institute. “We’re the preferred partner. And we’re always going to be the preferred partner.”

Earlier this week, U.S. Defense Secretary Lloyd Austin announced plans to send fighter jets to the UAE in response to the attacks, and McKenzie is expected to travel to the country next week. At the same time, approximately 60 countries kicked off the largest joint naval exercise in the Middle East. Among the participating countries are the U.S., Israel, the UAE and Bahrain — as well as Saudi Arabia and Oman, which have not yet joined the Abraham Accords.

Iran sits just miles away from the UAE across the Persian Gulf, and unlike Israel, the UAE maintains a channel of communication with Iran.

“When you are a small country, and you are a neighbor of an aggressive and crazy country that doesn’t believe in international commitment, or international relations — they work with militias, they don’t work with states — you have to be cautious,” said Najat AlSaied, an assistant professor at American University in the Emirates and an academic advisor at Sharaka, an NGO founded to promote cultural ties between Israel and Gulf nations. But they now view each other as allies against a common threat, even if their goals do not exactly align.

“Before the drone and missile attacks on UAE started, you had a real potential spectrum between UAE and Israel on Iran, because the UAE can potentially have some kind of talks with Iran. Communication has been going on. They’re trading partners. And that’s obviously not the case for Israel in any way, shape or form,” said Victoria Coates, a former deputy national security advisor. “What’s interesting about the stepping up [of] the Houthi attacks over the last three weeks is, in a way, that it shuts that off for the UAE and pushes them closer to the Israeli position.”

The blossoming Emirati-Israeli relationship in Washington does not mean the two countries are in lockstep on all geopolitical issues, or even Iran. But they do find themselves consulting each other more frequently than ever before.

The missile attacks on civilians in the UAE have also given the Emiratis an experience that Israeli civilians know all too well from their proximity to Hamas in Gaza.

“When people go through similar experiences of having non-state actors fire rockets on their cities, that’s bound to be a bonding experience of sorts,” said David Makovsky, director of the Koret Project on Arab-Israel Relations at The Washington Institute for Near East Policy.

The countries also had to contend with similar critics. Like Israel, the Emiratis responded to the Houthi attacks with military strikes of their own, by targeting missile launchers in Houthi-controlled areas in Yemen. And like Israelis, who have faced criticism for their retaliatory attacks in Gaza, the Emiratis have received criticism for not doing enough to avoid civilians in Yemen.

“It used to be that every leader in all of these countries made absolutely sure that they didn’t want to be seen in America as a partisan issue,” said Wechsler, but that’s no longer true — both because of foreign leaders who adopted a partisan sheen, and because of American politicians who went along with it.

When Republican House Speaker John Boehner invited Israeli Prime Minister Benjamin Netanyahu to speak to a joint session of Congress in 2015 without informing President Barack Obama, the speech damaged Israel’s ties with Democrats for years. Israel is still dealing with the fallout.

But terrorist proxies and missile attacks are not the only geopolitical commonality for Israel and the UAE. Both countries are navigating how to maintain strong relationships with Washington while also taking a more open approach to China than the U.S. might like. On Friday, when the Olympics begin in Beijing, Israel and the UAE will not be joining Washington in its diplomatic boycott of the Winter Games.

“Neither one really sees China as a geopolitical threat in the way the United States does, and that really is more a factor of geography than anything else. Neither one really wants to have to choose between the U.S. and China,” explained Michael Singh, the Lane-Swig Senior Fellow and managing director at The Washington Institute for Near East Policy.

In 2019, the UAE signed a $3.4 billion deal with China as part of its global Belt and Road initiative. Israel has not gone that far, but in September, the country inaugurated a new port in Haifa that will be operated by the same Chinese company that runs China’s massive Shanghai port.

“The conventional wisdom in Washington and elsewhere is that an American vacuum has enabled China and Russia to play a much more important and consequential role in the [Middle East],” Miller said in a recent public interview with Brett McGurk, assistant to the president and Middle East coordinator for the National Security Council.

“I think that is quite overstated. First of all, we are the security partner of choice across the region,” McGurk responded. “This has been something we inherited. I wasn’t surprised by too many things walking in the door but I actually was surprised by a few of the inroads the Chinese had made in certain areas.”

CIA Director William Burns reportedly raised concerns about China in an August meeting with Israeli Prime Minister Naftali Bennett, and Israel consulted with the U.S. before a high-level economic summit with China last month. At the meeting, Israel and China agreed to a three-year plan to increase cooperation on research and development, technology and science.

Israel and the UAE are “navigating it in similar ways,” Coates said of their approach to China. “It’s just very, very important that [the U.S.] continue to send the message that we want to partner with you, we want to share technology with you, we want to be partners in the future together and everything from cyber to AI. But that’s going to be extremely difficult if you have exposure to China.”