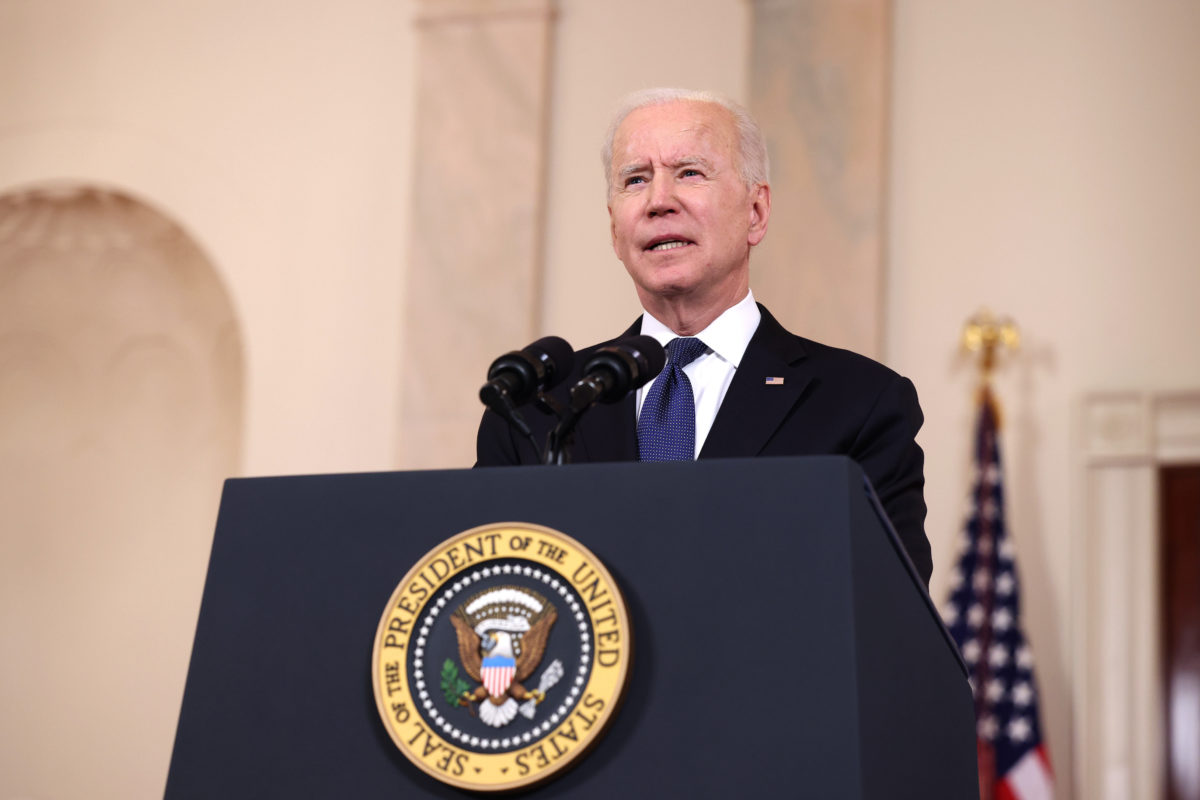 U.S. President Joe Biden delivers remarks on the conflict in the Middle East from the White House on May 20, 2021 in Washington, DC.

President Joe Biden delivered brief remarks on Thursday evening praising the cease-fire between Israel and Hamas and pledging that the U.S. would remain engaged in the region even after this latest round of violence is resolved.

Biden, who spoke with Israeli Prime Minister Benjamin Netanyahu before delivering his remarks, said he “commended [Netanyahu] for the decision to bring the current hostilities to a close in less than 11 days.”

“I also emphasized what I’ve said throughout this conflict: the United States fully supports Israel’s right to defend itself against indiscriminate rocket attacks from Hamas and other Gaza-based terrorist groups that have taken the lives of innocent civilians in Israel,” Biden continued.

Israel and Hamas, as well as other military groups in Gaza, agreed to a mutual and unconditional cease-fire brokered by Egypt on Thursday, following an 11-day conflict that killed at least 220 in Gaza and 12 in Israel. The announcement of the cease-fire, which took effect at 2 a.m. local time today, comes a day after Biden and other administration officials urged Israel to quickly de-escalate the conflict.

Biden pledged to “continue our quiet and relentless diplomacy” to ensure equal “freedom, prosperity and democracy” for Israelis and Palestinians. The president faced criticism from across the political spectrum that his administration has been disengaged on the issue in the initial months of his administration.

“I believe we have a genuine opportunity to make progress, and I’m committed to working for it,” Biden said.

During the 11-day conflict, the Biden administration blocked numerous efforts by the United Nations Security Council to issue statements on the ongoing violence that failed to condemn Hamas’s rocket attacks. The president pledged to work with the U.N. and other international stakeholders to support reconstruction efforts in Gaza.

“We will do this in full partnership with the Palestinian Authority, not Hamas, in a manner that does not permit Hamas to simply restock its military arsenal,” Biden added.

Sander Gerber, a hedge fund manager and activist who played a key role advocating for the passage of the Taylor Force Act, which bans U.S. payments to the PA as long as it continues “martyr payments” to the families of Palestinian terrorists, expressed concern about Biden’s willingness to work with the PA.

“I don’t think Biden himself understands that the PA has institutionalized violence through legislation, bureaucracies and budget,” Gerber told JI. “Sympathy for the Palestinian people is justified, but the first steps to better their lives is not to allow the PA to continue to oppress them. The Taylor Force Act codified that no monies for economic support should go through the PA because the PA pays to slay.”

“We’ve held intensive high-level discussions… with an aim of preventing the sort of prolonged conflict we’ve seen in previous years when the hostilities have broken out,” Biden said. “I extend my sincere gratitude to [Egyptian] President Abdel Fattah Al Sisi and the senior Egyptian officials who played such a critical role in this diplomacy.”

Sen. Chris Murphy (D-CT), the chairman of the Senate Foreign Relations Committee subcommittee that oversees the Middle East, was among the first U.S. lawmakers to call for a cease-fire in the region, joined by numerous other Democrats. Murphy said Thursday evening that the cease-fire was a positive step, but that more needs to be done going forward.

“I’m relieved by reports that Israel and Hamas have agreed to a cease-fire, and I commend President Biden and Secretary [Tony] Blinken for the role they played in bringing a halt to the violence,” Murphy said. “However, I am deeply concerned that without meaningful progress towards a two-state future, the conditions of despair will deepen, further fuel extremism and lead to a tragic renewal of the cycle of violence.”

In his own statement following the cease-fire, House Majority Leader Steny Hoyer (D-MD) reiterated his support for Israel’s self-defense, and placed the onus on Hamas to prevent future violence.

“Even with a restoration of calm… Israelis and Palestinians will live under the threat of further rounds of violence as long as Hamas continues to pursue Israel’s destruction and seek the wanton murder of Jews,” Hoyer said. “I hope that Hamas will take the opportunity this cease-fire presents to reevaluate its position and take steps to improve the lives of those under its rule.”

Hoyer also said he supports “providing humanitarian assistance through the Palestinian Authority to innocent civilians who have been injured or lost their homes in the fighting.”

Republicans had been reluctant to call for a cease-fire ahead of Thursday’s announcement. Sen. Todd Young (R-IN) was the only GOP member of the upper chamber who called for a cease-fire earlier this week, but he walked back his support on Wednesday.

“After 11 days of unrest, I am praying Israel’s call for a cease-fire will help bring peace to the region,” McCarthy said.