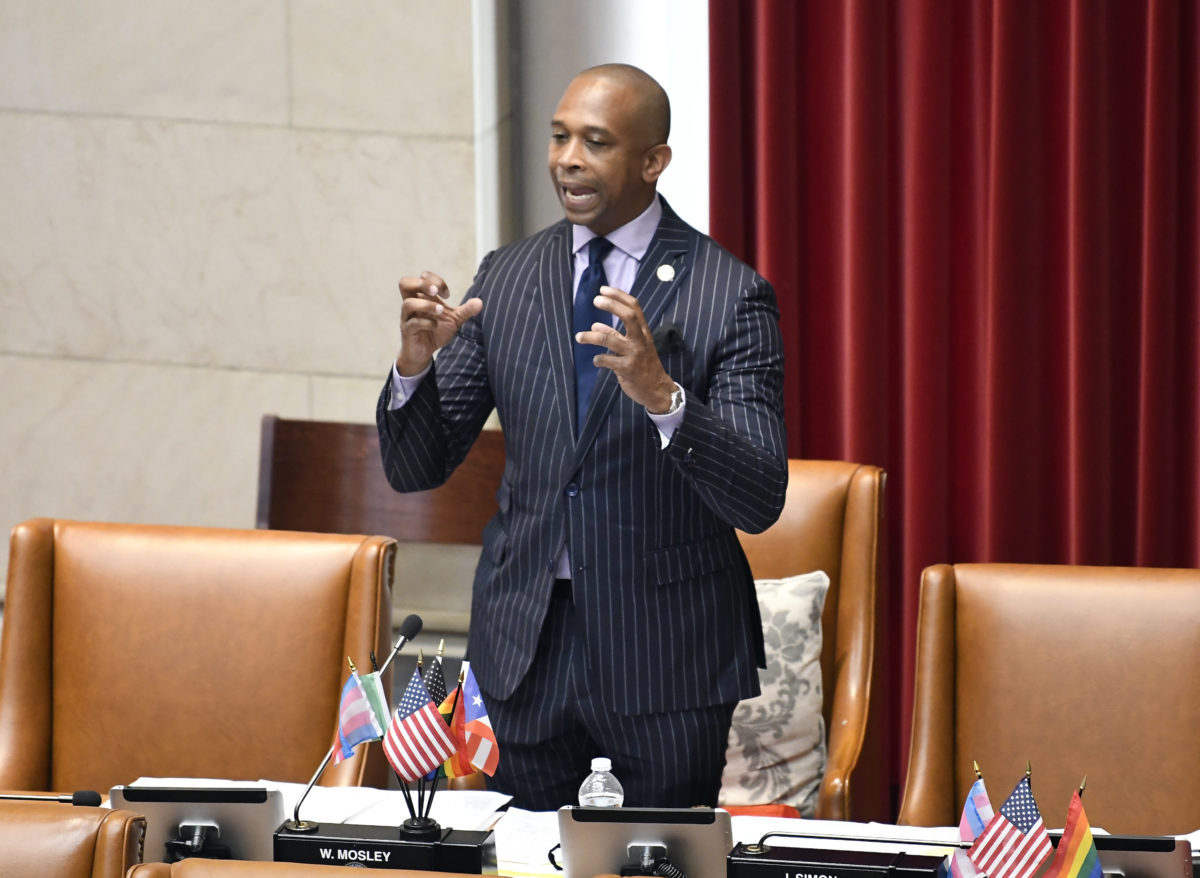 A little over two years ago, New York Assemblyman Walter Mosley (D-Brooklyn) stood on the main stage at AIPAC’s policy conference in Washington, D.C., where he was recognized as one of the group’s leading African-American activists. Last week, Mosley, 52, lost his reelection bid to a 31-year-old primary challenger, a nurse named Phara Souffrant Forrest, who was backed by the Democratic Socialists of America and Rep. Alexandria Ocasio-Cortez (D-NY).

In an interview with Jewish Insider late last week, Mosley said there was nothing he could have done to win a race that was influenced by a wave of anti-establishment sentiment. “When you’re dealing with those types of outside forces, coupled with the exorbitant number of people who are first time and ideologically-driven voters, there is nothing that I could have done from a campaigning perspective that would have changed people’s minds,” he said.

Mosley was first elected in 2012 to succeed the now-chairman of the House Democratic Caucus, Rep. Hakeem Jeffries (D-NY), in the 57th Assembly district, which includes parts of the Crown Heights Jewish community and nearby Williamsburg.

In 2015, Mosley was the lead sponsor, along with former Assemblyman Phil Goldfeder, of a resolution that rejected the Boycott, Divestment and Sanctions movement against Israel. Since then, the Brooklyn lawmaker has become a frequent panelist at local AIPAC events and a star in the Jewish community.

In 2017, Mosley earned AIPAC’s Ralph Bunche Award, which recognizes African-American activists who work to advance the U.S.-Israel relationship. At AIPAC’s annual conference in 2018, Mosley appeared on the main stage and recounted the story of Bunche, an African-American scholar who received the Nobel Peace Prize in 1950 after negotiating armistice agreements between Israel and four Arab states. “Since I was raised in Crown Heights until I was 8 years old, I was always around the Jewish culture. To me, it was nothing abnormal, interacting with your neighbors who happened to be Jewish,” Mosley told JI in 2018. “Fast-forward to now, my political career, it was natural and organic in terms of doing what is right.”

Mosley didn’t think his staunch support for Israel was a factor in his defeat. “I believe that this was not necessarily a referendum against me personally,” he said. “This was more so a referendum against generalized assumptions made due to party affiliation. This was a battle of perceived ideologies, because I don’t think that we differ on too many things. The one thing that we do differ on is that I have a track record, and she does not.”

Mosley told JI that Israel didn’t come up in the race, except when his opponent, Souffrant Forrest, filled out a questionnaire for DSA. “When it came to support for BDS, she clearly stated that she was supportive of BDS,” he said. “In my support of Israel, as well as my support of my Jewish constituents, it is something that I was unwavering on.”

Mosley expressed concern that the group of newly elected DSA-aligned lawmakers will not just try to push their agenda in Albany, but also influence other statewide lawmakers and future candidates to take their side to advance their political careers. “You know, a lot of it is about self-preservation, about how I can keep my feet,” he explained. “You have members who are currently sitting in the Assembly, who have befriended DSA and their affiliates that you have to concern yourself with their allegiance and and their priorities. If you’re a younger person who’s in the legislature, maybe your alignment is with DSA because you know they’re going to be around, potentially, for a very long time.”

As he looks to his next move, Mosley told JI he hopes he will serve as a role model for other lawmakers in defending the Jewish state. “When you’re in this business for a period of time, sometimes you have to do things or say things that maybe you are not 100% in alignment with because of the political ramifications. But there’s one thing that I was unwavering in and that was my support of Israel,” he maintained. “I have family members who are Jewish, I have family members who are Muslim, but they all understand why I was so supportive of Israel. It is time for other people to step up and it’s time for other people to show themselves as friends of Israel even as the Assembly changes. We are New Yorkers, but we are also Americans, and America’s alliance to Israel is first and foremost something that we all should adhere to.”

Mosley, who visited Israel in 2018 as part of an Assembly delegation, urged his colleagues to do the same and “meet with Israelis, Israeli Arabs and Palestinians, talk to members of the Knesset from both sides, and formulate your opinion like that. But don’t allow others to formulate it based upon what they think you should hear and through their mouth.”

As for his own future, Mosley is optimistic. “I am looking at all my options, and we’ll see what happens,” he said. “But ultimately, everything is in God’s hands and I thank him for the opportunity to serve the people in the neighborhoods that I grew up in.”