Ehud Olmert: Bernie Sanders ‘will not play the game’ on the traditional U.S.-Israel alliance 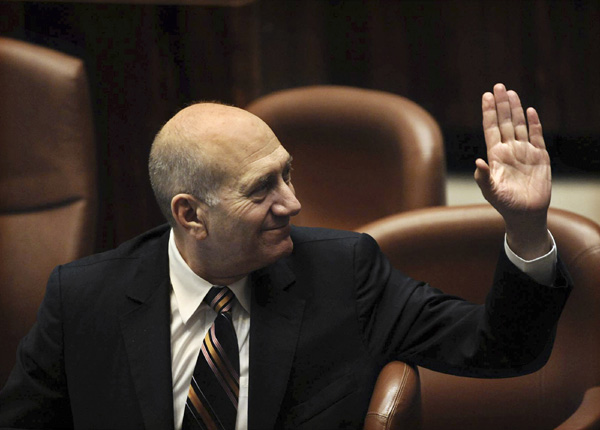 Former Israeli Prime Minister Ehud Olmert suggested on Wednesday that Sen. Bernie Sanders (I-VT), fresh off his New Hampshire win on Tuesday, is the only Democratic presidential candidate who if elected would buck tradition on issues regarding U.S.-Israel relations.

Changing the game: In conversation with Ethan Bronner, a senior editor at Bloomberg, at the Council for Foreign Relations in New York, Olmert said, “I think that Bernie Sanders will not play the game” when it comes to the tone of the U.S.-Israel relationship and longstanding U.S. policies. “In this respect,” he said, “Bernie Sanders reminds me of [President Donald] Trump, where he’s not subject to any of the protocols which are common in our tradition. He can say anything and everything regardless of what may be the reaction of some in the Democratic Party.”

Maintaining U.S. support for Israel: The other candidates, Olmert posited, wouldn’t veer away from the traditional relationship, in particular if there’s a change in government in Israel this year. The former prime minister pointed to former President Barack Obama, who had a tense relationship with Prime Minister Benjamin Netanyahu — “and despite the provocations of the Israeli government against him and his secretaries of state” — increased military support for Israel. “America, only one time in eight years abstained [during an Israel-related vote] at the U.N., and this was in the last month of Obama’s presidency,” he explained, referencing the December 2016 U.N. Security Council vote that criticized Israeli settlements (UNSC 2334). “So I doubt that if any other Democratic candidate — such as Joe Biden or Michael Bloomberg, who may rise to be the [dark] horse in this race — wins, that there will be a difference. They will all disagree with some policies of Israel, but they will be very careful” not to change the nature of this relationship.

Punditry: Olmert told the crowd that based on conversations he’s having with Americans, “it is more likely that President Trump will be re-elected. And whether you agree or disagree with his style, international policies and his manners, you can’t disagree that he is a very, very friendly president to the State of Israel.”

Predicting a warm Trump-Gantz relationship: Olmert also suggested that — based on his prediction that Blue and White leader Benny Gantz will form a minority government after the March 2nd election — the personal relationship between Trump and Gantz “will be of a different nature, but I think that to the extent that the appearance of this warm relationship is important for American politics, at least from March through November, the attitude [towards Israel] will continue the way it is. I think that whoever the prime minister of Israel is, I don’t see that the president has any particular interest in making the appearance of this relationship be any different.”

Responding to criticism: The one-time Netanyahu rival pushed back against the prime minister’s recent attacks, when he claimed that Olmert’s meeting with Palestinian Authority President Mahmoud Abbas in New York on Tuesday was an attempt to foil Trump’s peace plan or to help Gantz defeat Netanyahu. “As you have heard, I was positive about the peace plan,” Olmert told Jewish Insider. “Bibi is full of lies… He is obsessed [with me] under the present circumstances, and it’s very distressing to see a prime minister in this emotional position.” Olmert said he didn’t intend to represent anyone in Israel, but came to New York to offer his personal opinion on the peace plan, hoping that he could influence Israeli public opinion. The former prime minister also pushed back against Netanyahu’s claims that he served as an advisor to Blue and White. “I’m not an advisor of Benny Gantz. I don’t work for him, he doesn’t work for me,” Olmert stressed. “I don’t [tell] him what to do and he doesn’t ask me what to do. Other than knowing him on a friendly basis for many years, I have no commitments to him and he doesn’t have any commitment to me.”