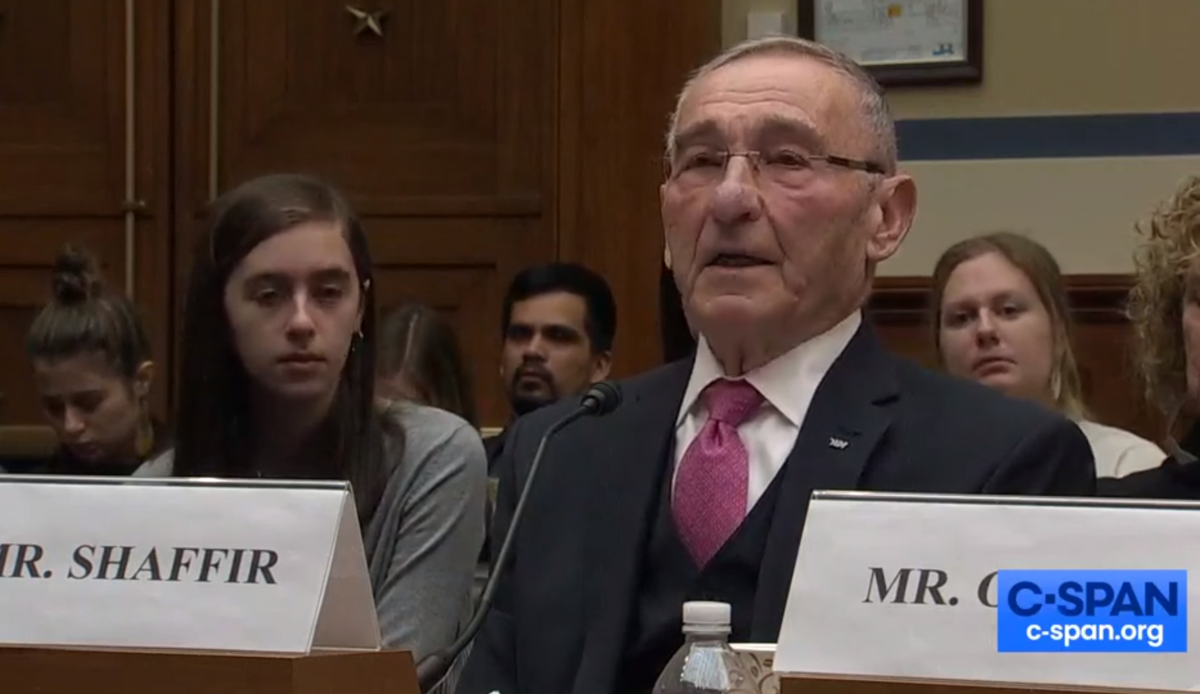 The House Committee on Oversight and Reform, chaired by Rep. Carolyn Maloney, heard a detailed account yesterday from Holocaust survivor Nat Shaffir, who was wearing a gold pin with the Hebrew word ‘zachor’ (remember), during a hearing on combatting hate 75 years after the liberation of Auschwitz.

Rep. Rashida Tlaib (D-MI) told Shaffir that she decided to take her son to visit the Holocaust Museum in D.C. five years ago after he suggested he would hide his Muslim identity upon overhearing her talking with his dad about a USA Today cartoon equating Muslims with Nazis. “I would like to thank you very much for taking your son to actually witness something like that. It’s very important, and I wish that more parents would take their children to places like that,” Shaffir responded.

ADL CEO Jonathan Greenblatt expounded on new data released by the ADL that shows one in five Americans believe that “Jews still talk too much about what happened to them in the Holocaust.” The poll also found that 61% of American adults agree with at least one or more classic antisemitic canards, including 24% who agree with the statement “Jews are more loyal to Israel than to America.”

Rep. Tom Malinowski (D-NJ) pressed Dr. Dore Gold, former director general of Israel’s Foreign Ministry, about Robert Jeffress, a controversial pastor who delivered a prayer at the opening ceremony of the Jerusalem U.S. embassy in 2018. “Can you see that it may be possible to be superficially pro-Israel while, in fact, also contributing to the climate that is making life less safe for Jews in America?” Gold replied that he agrees the embassy should have known better before inviting Jeffress to the event. But he also pushed back, saying that antisemitism comes from both from the left and right “and you can’t just lean over and say it’s one and ignore the other.”

Hunkered down: Lipstadt highlighted that Jews are “increasingly going underground” and hiding their identity in the wake of recent antisemitic violence. “Friends have asked me whether my decision, prompted by these aforementioned events, to wear a Jewish star is wise. ‘Is it safe?’ one very sober, rational person asked me recently,” she told the committee. “After the Shoah, it is inconceivable that, once again, Jews feel safer hiding their Jewish identity. This is not healthy for Jews or for the societies in which they live.”

In his testimony, Forman recommended increasing congressional visits to countries of great concern, which would give the local government and Jewish communities the “signal that the U.S. government is watching.” He also urged House members to urge their Senate colleagues to vote on the bill to elevate the status of the Special Envoy to Monitor and Combat Anti-Semitism to the rank of an ambassador.

Bonus: Senators Jacky Rosen (D-NV) and Ron Wyden (D-OR) sent a letter to acting White House Chief of Staff Mick Mulvaney imploring him to deny press access to TruNews after its founder and host Rick Wiles denigrated Jews and repeated antisemitic conspiracy theories. The Democratic senators wrote that “the normalization of antisemitism continues to pose a grave threat to Jews in America and across the world.”