Inside the efforts to build a Tree of Life memorial 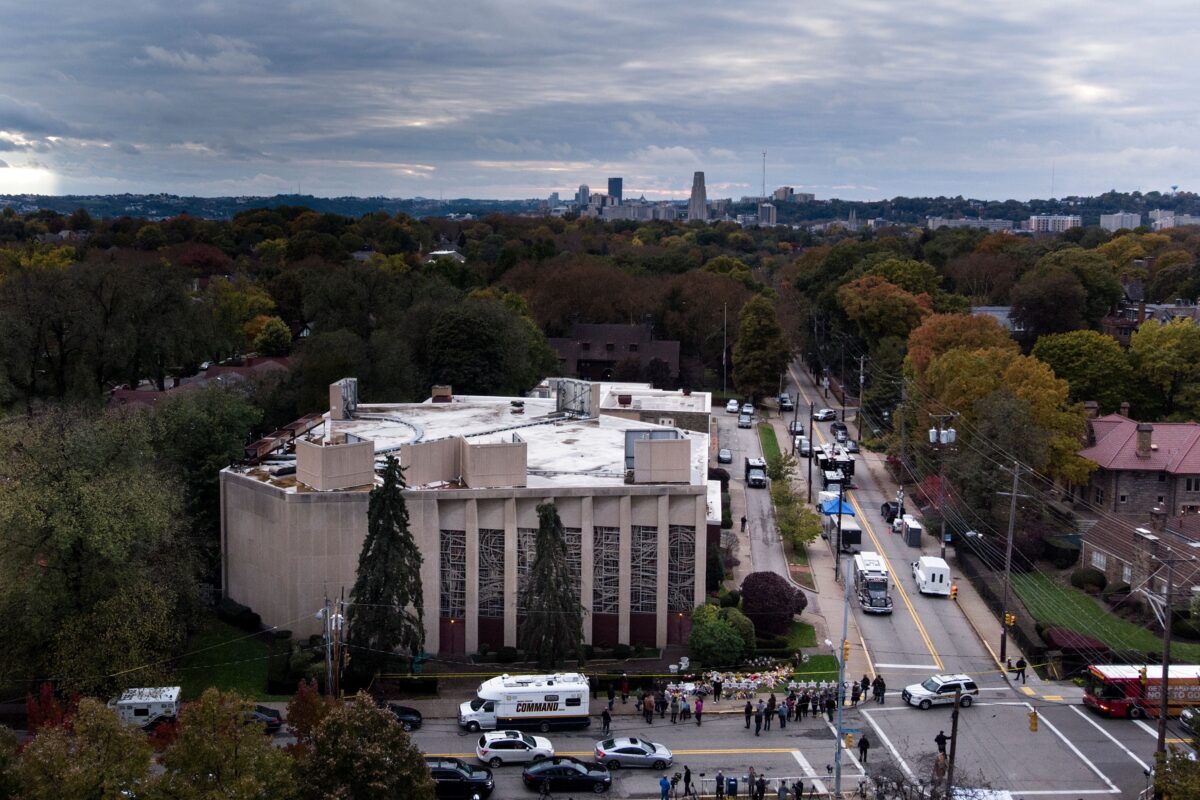 People pay their respects at a memorial outside the Tree of Life synagogue following the shooting that left 11 people dead in the Squirrel Hill neighborhood of Pittsburgh, Pennsylvania, two days after the attack, on October 29, 2018.

Nearly four years after 11 people were killed in a mass shooting at Pittsburgh’s Tree of Life synagogue, the congregation remains shuttered. A nonprofit that is redeveloping the Tree of Life site wants to see to it that worshippers return — alongside tourists, community members, mourners and more, if a memorial-museum complex planned for the site moves forward.

Tree of Life, the nonprofit overseeing the project, recently enlisted a team of 10 lobbyists from  Brownstein Hyatt Farber Schreck to help secure federal funding for the project, Politico reported.

“It can have the effect of making or breaking where we need to be,” said Michael Bernstein, chair of Tree of Life’s interim governance committee.

Bernstein declined to share the budget for the project, which will include a memorial, a museum focused on antisemitism and a synagogue. Last year, the state of Pennsylvania awarded $6.6 million to the nonprofit, and major local philanthropies including the Hillman Family Foundation and the Richard King Mellon Foundation have contributed undisclosed amounts. Tree of Life intends to begin a national fundraising campaign soon, but the federal funds will contribute to major costs like security.

Sen. Bob Casey (D-PA) told Jewish Insider that he intends to advocate for Tree of Life on Capitol Hill in its search for federal resources. “Nearly four years ago in Pittsburgh, we witnessed the most deadly act of violence against the Jewish community in American history,” Casey said. “As Tree of Life works to honor those who lost their lives while rebuilding and moving forward, I will continue to stand with them against antisemitism and help connect them with federal resources.”

The goal of Tree of Life’s Washington lobbying blitz is to do “a broad survey of what opportunities might exist on the federal appropriations front,” said one person familiar with the lobbying effort, “and also helping to identify what federal grants are accessible, and helping them navigate that process so that they can secure the funds that are necessary to break ground here in short order.”

Tree of Life hopes to break ground on the project in early 2023 and open to the public by fall 2024, which will be the sixth anniversary of the massacre. The compound was designed by noted architect Daniel Libeskind, who designed Berlin’s Jewish museum and oversaw the rebuilding of the World Trade Center site in New York City, in conjunction with Pittsburgh firm Rothschild Doyno Collaborative.

There is no exact model that Tree of Life is trying to replica, in part because the atrocity in Pittsburgh was so unique — it was the most deadly act of antisemitism on American soil — but also because such ambitious projects are not always seen to completion.

“Memorials at sites of mass shootings, unfortunately, are a growing phenomenon in the U.S. Very few have successfully been able to pull off what we’re in the process of developing,” Bernstein explained. “I think we’re seeking help wherever we can.”

He named as examples memorials that have been discussed for the sites of the 2015 Mother Emanuel AME shooting in Charleston, S.C., and the 2016 Pulse nightclub shooting in Orlando. In June, President Joe Biden signed a bill designating the nightclub site as a national memorial.

“It’s an ambitious program, and so seeking federal sources, as well as local and state resources, are, I think, fairly essential for us to be successful,” said Bernstein.

The museum will tell the story of what happened on Oct. 27, 2018, in the context of antisemitism and other forms of hatred in the U.S.

“Our focus is antisemitism, but it’s antisemitism as an animating force behind many aspects of other forms of hate,” Bernstein said. “The other aspect that happened on that day and weeks after was the community response. I think that the way the Greater Pittsburgh community responded to the tragedy as a rejection of that ideology and support and being held by our neighbors — that’s a universal.”