God is a woman, and other revelations in Liana Finck’s ‘Let There Be Light’

The New Yorker cartoonist grapples with sexism, religion and New York City in her illustrated retelling of the book of Genesis 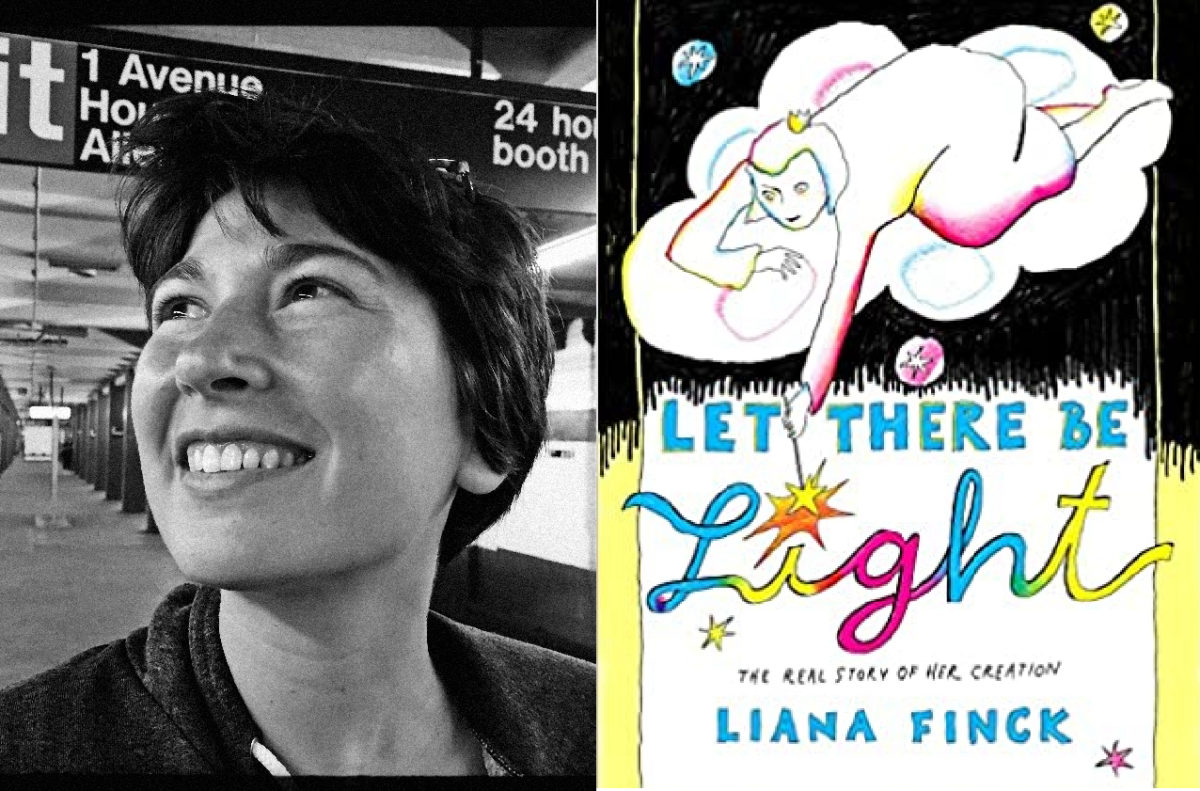 One of the most famous stories in the Bible — thanks, in part, to the musical about its main character — is that of Joseph, who was sold into slavery by his brothers before becoming a trusted advisor to the Egyptian pharaoh.

The tale begins when Joseph’s brothers throw him down an empty well before selling him as a slave to passing merchants. But what if Joseph stayed in the well, and that well had been full of water, and the pharaoh was a merman who reigned over the depths of the ocean?

This is the world Liana Finck imagines for Joseph in her new book, Let There Be Light: The Real Story of Her Creation, an illustrated retelling of the book of Genesis: an underwater kingdom where Joseph settles in with an oxygen helmet, first in deep-sea jail and then next to the king’s deep-sea throne as his advisor.

“I put Joseph in an underwater cave [because] in the Torah, Joseph is thrown into a well, and I just decided to keep him down there,” Finck told Jewish Insider in a recent interview, in the kind of sentence that only an artist can utter with no hint of irony, because that’s apparently how the brain of a cartoonist works.

The book takes the narrative of Genesis and gives it a modern twist, culled from Finck’s own life and her relationship to gender, sexism, art, God and New York City. With nearly 600,000 Instagram followers and a gig as a frequent contributor to The New Yorker, Finck’s bona fides as an artist are unimpeachable. So, too, is her Jewish background; she is not an amateur in the art of Torah study.

As she conceptualized the book, her parents were her hevrutas, or study partners. “I didn’t read all the Rashi or commentators. I knew I would never catch up,” said Finck, who understood that whatever spin she put on the sacred text would probably not placate the most traditional adherents of Judaism or Chrisianity. “But I got into it. And I felt like I was pretty genuine.”

The idea for the book came from her editor, after her first book — an illustrated memoir about her relationship with her mother, and what it means to be a woman artist (her mother is a painter) — included snippets of biblical passages at the start of each chapter. The process of writing this book, she said, was overwhelming.

“After I read the book of Genesis in Hebrew, I made my own translation, kind of referring to the various other translations. And then I edited it down, and then I started thinking of it in terms of comics,” said Finck, who grew up attending Solomon Schechter Jewish day schools in the New York City suburbs.

As a 36-year-old living in Brooklyn, Judaism now means something different to Finck than it did during her childhood. Writing the book helped her come to terms with that.

“I wonder why I’m not as easily observant as my parents are and why this community doesn’t seem to work for me, even though I don’t … I’m not one of those people who’s like, ‘Oh, I hate religion. I hate God. I hate the Torah.’ I love those things,” said Finck, who noted that she does not attend synagogue services as an adult. “I think a big part of that answer is that it’s a sexist religion, and there’s a lot you have to kind of subsume, to pretend you’re not feeling, in order to fit in if you’re a woman.”

Throughout Finck’s book, the oft-inexplicable gender dynamics of the Torah are mined for absurdity. She begins with the story of creation, with God depicted as a woman who craves validation from the humans she created. In this version, Adam assumes God to be a man, and she goes along with it rather than let the first man succumb to an identity crisis. A woman hides who she really is in order to please a man — Finck’s point makes itself.

“Studying the Torah at Hebrew day school, I thought of it mostly as a portrait of one childlike (and therefore relatable) character full of feelings and desires: God,” Finck writes in an author’s note at the end of the book.

Toward the beginning, a section called “The Begats” relays the long, repetitive part of Genesis that goes through the lineage of the Hebrew patriarchs. The lineage is written in such a way that only the men — fathers and sons — are named. (“This is the ledger of the generations of man,” the section begins. “If you are easily bored, you may skip it.”) But where, her book seems to suggest, are the women who are needed for said procreation? The result is pages of illustrations showing children emerging awkwardly from all manner of male body parts. It is the opposite of immaculate conception.

“I just told the story really straight, as the Torah told it, and just illustrated it. So, like, what does ‘begat’ mean, if no women are involved? It means the babies are, like, popping out of these men’s armpits,” Finck explained. One page shows a baby bursting from a man’s chest: “At 65, Mahalalel begot Jared — lived 830 more years — and ate — and procreated — and died.”

The book continues by reimagining other seminal religious stories with a modern sensibility. Abraham is a struggling art student, depicted as such because in Finck’s telling, “God has told him that he’ll be a great artist one day as opposed to that he’ll have a great nation. It’s just something that I understand,” she said. Abraham the artist lives in New York City, rather than biblical Israel, because New York “is my Promised Land, a place I always wanted to go to as a kid, and where I ended up, and which I have a fraught relationship with now.”

Finck’s take on the Bible is her most Jewish work yet, but her cartoons are suffused with a New York neuroticism that feels decidedly Jewish. (And the occasional Jewish holiday appears on her Instagram feed from time to time.)

In her signature style that is just one degree of detail above stick figures but somehow far better, she illustrates the everyday emotions that feel too silly to name yet are instantly relatable and, usually, anxiety-inducing.

In one, captioned “the people you need to text back,” three figures exude a combination of angry and sad. In another, a Venn diagram is labeled “text message is too short” on one side and “text message is too long” on the other bubble. One illustration depicts a woman shouting, “I’m so nutty! I always feel randomly guilty for no reason!” A man looks back, unblinking.

“I’ve always drawn best when I’m being funny. I don’t always try to be funny but that seems to be what works best for me. But the confessional stuff I think partly came from reading Elena Ferrante, that made a really big change for me,” said Finck, referring to the pseudonymous Italian novelist whose bestselling “Neapolitan Novels” grapple with romance, identity and female friendship.

But over time, the focus of her work shifted. She told her followers she was pregnant with a stick figure napkin-drawing of a pregnant woman. Babies and dogs appear often on her feed.

“I change so much as my life changes. I started doing the Instagram about rage with dating, basically. Now I have a family and I live in a quieter part of Brooklyn and I have a dog and it’s just different,” Finck said. “The things I want to write about are different, and also can’t be written about in these little rage-filled snippets anymore.”