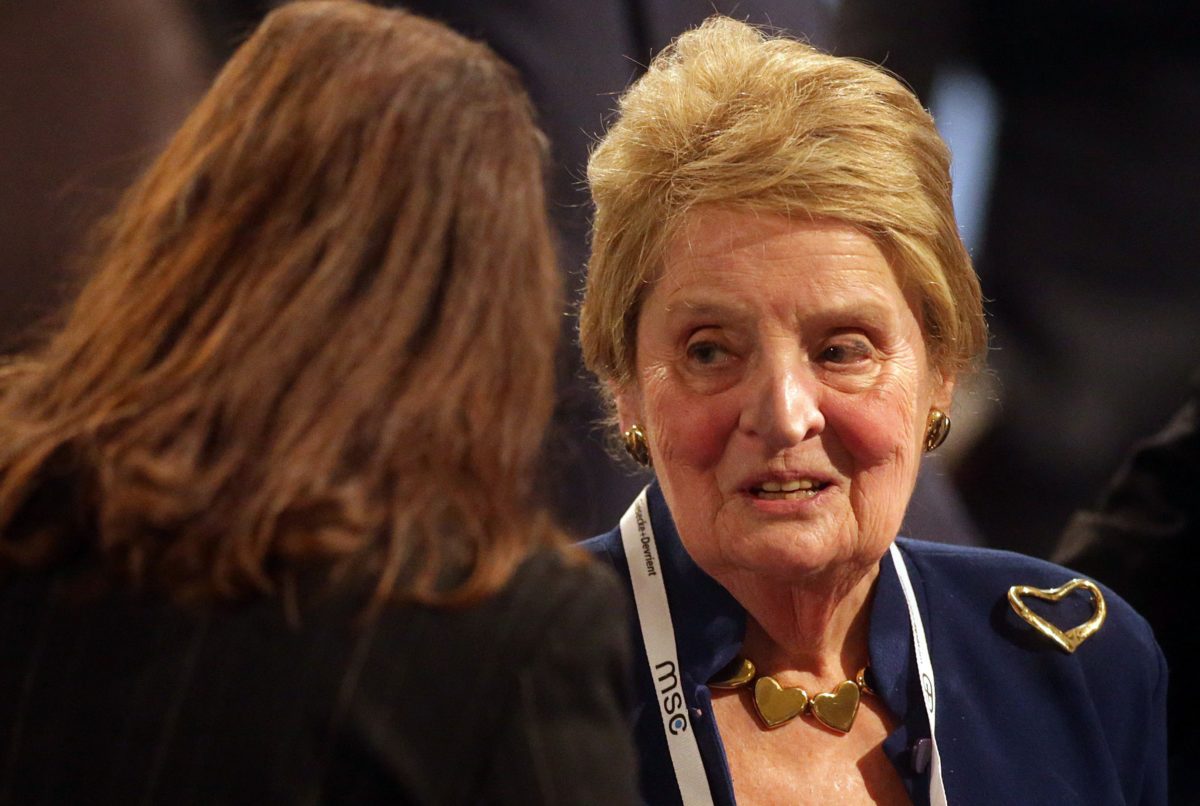 Former Secretary of State Madeleine Albright, who did not discover definitively until later in life that her family was Jewish, died on Wednesday, her family announced in a statement. Albright, the first woman to hold the State Department’s top job, was 84. Her daughter Anne said the cause was cancer.

Albright, who was born in Prague to a Czech diplomat, followed in her father’s footsteps, becoming first the U.S. ambassador to the United Nations before serving as secretary of state in President Bill Clinton’s administration.

The family received asylum in the United States after fleeing the communist regime in what was then Czechoslovakia, a formative experience that shaped Albright’s approach to similar refugee crises around the world for the rest of her life.

“What was most impressive, I thought, about Madeleine was [that] she could talk about foreign policy in ways that went way beyond what too often is just a very small inner circle. She could talk as immigrants do,” Ann Lewis, a former Clinton administration official, told Jewish Insider. Lewis first met Albright in 1984 when she served as a foreign policy advisor to vice presidential candidate Geraldine Ferraro and Lewis was a senior Democratic National Committee official. “She never took the United States for granted. She never took our power for granted.”

“It was a real breakthrough that a woman could hold this position, that a woman would bring the credibility and the power of the United States with her,” Lewis noted.

“As one of the first women in high-level U.S. foreign policy posts, she stood out for her toughness on policy and her fearlessness in her views and her ability to attract media attention,” the author and historian Stephen Schlesinger, who is a fellow at the Century Foundation, said in an email to JI.

The former U.N. ambassador and her family first left Czechoslovakia for London when Albright was a toddler, in 1939, following the Nazi occupation of the country. They returned after the war and her father was posted further east. In 1948 her family immigrated to the U.S., where she became a citizen nine years later.

Albright often described herself as having a “Munich mindset” — which set her apart from many diplomats in the next generation, including her friend and former Secretary of State Colin Powell.

“She explained to me once [that] the shadow of Munich compelled her into a certain mindset, a sort of risk readiness, a willingness to stand up for freedom and confront authoritarians through the use of military force,” Aaron David Miller, a senior fellow at the Carnegie Endowment for International Peace, told JI. “Whereas some of her younger colleagues, she would say, grew up with the Vietnam mindset. And Vietnam generated, to a large degree, a certain amount of risk aversion.”

That mindset, Miller, who worked under Albright at the State Department in the 1990s, said, “explained a lot of her policies during her years as secretary of state, as well as her advocacy at the U.N. during some very critical years where you had horrendous events taking place, particularly in Bosnia.”

“If you live in the shadow of World War II, and if you are a refugee, and if your father leaves Czechoslovakia as a diplomat, because his life could be threatened, then you will come away with a certain amount of risk readiness. You believe that authoritarianism and autocracies must be confronted. And if you were a product of the Vietnam generation, as Powell was…then risk aversion, not risk readiness is your sensibility.”

Former Sen. Joe Lieberman (I-CT) told JI that he met Albright in 1992 when the two worked on the foreign policy portions of then-presidential candidate Bill Clinton’s platform. “She went on to be a principled and effective ambassador to the U.N. and secretary of state, providing great moral and practical leadership in the American and NATO response to aggression and genocide in the Balkans.”

The 2000 vice presidential candidate said that Albright had formed a special connection with his wife, Hadassah, “because they were both children of survivors of WWII and the Holocaust and both immigrants to America who believed in the American Dream and were blessed to live it.”

Albright, he added, “made an enormous contribution to the security and freedom of the American people and so many millions of others throughout the world.”

Abe Foxman, the former director of the Anti-Defamation League, said he was first introduced to Albright prior to her tenure as secretary of state, and they remained in touch while she was in office.

“She was outspoken on antisemitism as part of authoritarian societies and outside. Staunch advocate and defender of democracy and its values — partially because of her and her parents’ experiences,” he said. “We didn’t always agree on the Middle East, and we had serious discussions — but it was never angry. It was honest and sincere.”

Foxman said his relationship with Albright was “solidified” when details of her family’s Jewish background emerged. After she became secretary of state, Albright learned that her parents had converted to Catholicism, as a means of protection, during WWII and that 26 members of her family, including three grandparents, were likely killed in the Holocaust. Foxman — who himself was raised Catholic for a time during the Holocaust — said he counseled Albright on how to handle the revelations.

“She needed friends and I felt that was the right thing to do,” he said.