In Canada, a Jewish party leader is left out of a government conference on antisemitism 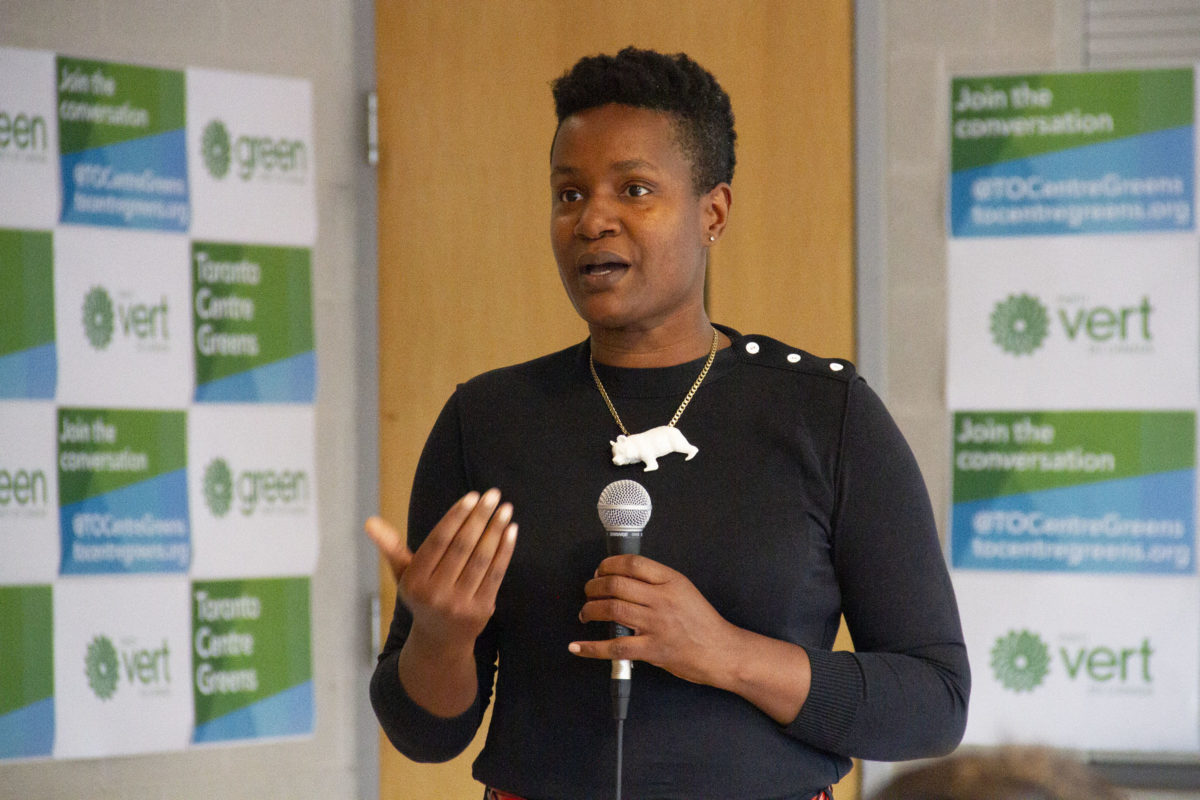 A national summit on antisemitism is scheduled to be hosted by the Canadian government today in a virtual gathering whose attendees will include a diverse array of activists, academics, political leaders and Cabinet members, according to an announcement.

But it seems as if the federal government was insufficiently exhaustive in conducting Jewish outreach for the event.

On Tuesday, Annamie Paul, the recently elected Green Party leader, disclosed on social media that she had not yet received an invitation with less than a day remaining until the virtual summit — a curious omission given that Paul is the first Jewish woman to helm a federal party in Canada as well as the first Black party leader in Canadian history.

“The government is hosting a National Summit on Antisemitism tomorrow. MPs, govt officials & Jewish civic leaders were all invited. I wasn’t,” Paul wrote in a pointed Twitter message to her nearly 30,000 followers. “I am the only Jewish Leader of a federal party and a constant target of antisemitism. The government knows I should be there.”

In a phone interview with Jewish Insider late Tuesday afternoon, Paul expressed further exasperation with the apparent snub, arguing that her exclusion from the summit was a missed opportunity for all involved. “I certainly would rank high on the list of Jewish people in Canada who receive regular antisemitic attacks,” said the 48-year-old lawyer and party leader. “Being able to share my experience and being able to hear from me about what some of the solutions I think might exist based on my experience, my lived experience, I think, would be beneficial to everyone.”

Paul said she had been waiting for an invitation since the summit was announced earlier this month by Bardish Chagger, Canada’s minister of diversity, inclusion and youth, who organized the event. But as the deadline neared, she suggested, her only recourse was to speak out publicly.

“I think it’s quite extraordinary that the government would feel that it would be in the interest of the conversation not to have my participation,” she said. “As someone who’s a member of the community and a mother, as well, of a teenager and a 21-year-old and sees what is occurring, and the increase in acts of antisemitism and the concern in the community, of course I wanted to participate and contribute to that discussion. It’s particularly hard for me to be excluded from this one.”

Conservative Party leader Erin O’Toole, who is not Jewish, also reportedly did not receive an invitation to the event.

“When you’re talking about issues related to combating hate, I don’t consider that to be a partisan issue at all,” Paul told JI. “I assume that the intention of the summit is to foster understanding, to educate and to emerge with at least some actionable recommendations or ideas,” she said, “about how we can combat the mounting tide of antisemitism in Canada.”

The Green Party leader, who converted to Judaism in 2000, has written about the litany of antisemitic attacks she received during her campaign for federal office last year, when she was accused of accepting bribes from Israel and spreading hasbarah, among other specious allegations.

“The reason that many members of the community wanted to have this emergency national summit is exactly because there is a heightened sense of concern,” she said.

The summit was initially proposed by the Centre for Israel and Jewish Affairs, a nonpartisan advocacy group of the Jewish Federations of Canada, following a rise in antisemitic incidents during the recent conflcit between Israel and Hamas, according to the organization’s vice president, Richard Marceau.

Marceau said he looked forward to discussing “constructive policy proposals” with attendees, including Irwin Cotler, Canada’s former justice minister and current special envoy on preserving Holocaust remembrance and combating antisemitism. “Given how consequential this issue is for our community and Canadian society,” he emphasized in an email to JI after Paul’s social media comments on Tuesday, “we believe this discussion should include all the national political leaders, a position we have expressed since calling for the summit in May, and one we maintain.”

The Canadian government will also hold a national summit on Islamophobia on Thursday.

“I haven’t received an invitation to that either,” Paul griped.

“There just seems to be a feeling that this sort of thing can be done without any consequences at all, and also that my contribution does not have sufficient value to be worth including me,” she asserted. “That is a very frustrating thing. It is something that has happened more than once. I mean, this is just the latest example of that.”

The Green Party leader has also found herself increasingly alienated by members of her own party following the recent flareup in the Middle East. During the conflict in Israel and Gaza this past May, Paul issued an even-handed statement, urging “restraint” and calling “on those in positions of authority to do all in their power to prevent further injury or loss of life.”

But in the view of Jenica Atwin, then a Green Party MP in New Brunswick, Paul’s message did not go far enough in condemning Israel’s “unthinkable air strikes in Gaza,” as she wrote in a since-deleted Twitter message defiantly rebuking the party leader. “End Apartheid!” Atwin declared at the end of her comment.

Days later, Noah Zatzman, Paul’s senior advisor, who is Jewish, posted on Facebook that he had experienced unsettling levels of antisemitic hatred as violence escalated between Israel and Hamas, including from Green Party MPs. “The progressive and climate communities have displayed, at some points this week, overt and virulent anti Jewish behavior,” Zatzman charged.

Last month, Atwin broke with her party and joined the Liberal caucus, citing tensions resulting from the Israeli-Palestinian conflict as a motivating factor, and subsequently reducing the Green Party’s already slim representation in the House of Commons to just two seats. Following her departure, the remaining Green Party MPs, Paul Manly and Elizabeth May, suggested that Zatzman’s social media salvo, though not explicitly directed at Atwin, had nevertheless precipitated her resignation.

“The Israeli-Palestinian conflict and what happened in May had repercussions in Canada and exacerbated tensions in the Green Party,” said Daniel Béland, a professor of political science who directs ​​the McGill Institute for the Study of Canada.

The Green Party has long been a source of internal disputes over Israel. In 2014, for instance, Green Party President Paul Estrin, who is Jewish, resigned from his position after party members took issue with a blog post in which he expressed pro-Israel sentiments while criticizing Hamas. Five years ago, the party passed a controversial resolution supporting the Boycott, Divestment and Sanctions movement against Israel, despite objections from May, the former longtime Green Party leader and an MP in British Columbia. May had considered resigning in protest before a new resolution was agreed upon.

The nasty dispute now ensuing within the party is a replay of such dynamics. “There has been a lot of infighting,” Béland said. “It’s a very messy situation.”

Paul has so far refrained from condemning Zatzman, whose contract was not renewed at the beginning of July, and on Monday the embattled Green Party leader confirmed that she had dodged the no-confidence vote planned for July 20 as well as a newly launched party membership review. “This experience has been incredibly painful for me and for my family, and I want to be up front about that,” Paul said at a press conference in Toronto, where she resides. “It is extremely hard to have your integrity questioned when you value it so much.”

Paul declined to comment directly on party dynamics or whether she had hoped to address the lingering feud at today’s antisemitism summit. “If the goal of this summit is to be as effective as possible and to try to build a consensus, a national consensus, then every political party leader of a major party, a party with seats in Parliament, should be there,” she said.

“The question is, have we really arrived at a point where partisan concerns supersede, let’s say, the national interest?” Paul mused. “I mean, what could be the reason that it would make sense not to include me? I just can’t think of one.”

“It’s clearly not an oversight,” she alleged. “It was intentional.”

Asked what evidence she had to support that claim, Paul then backtracked on her assertion. “I can’t say that it’s intentional,” she conceded, but added that several prominent Jewish community leaders and organizations — whom she declined to name — had personally asked for her to be invited to the event.

“I have spoken with the prime minister several times since becoming leader in meetings arranged between our offices,” Paul said. “Despite being the leader of a federal party with contact information published widely, despite having social media accounts with the direct messaging feature open — should I go on? — despite all of those things, despite being in the newspaper quite regularly these days, as well, despite all of that, an invitation has not arrived.”

Aidan Strickland, a spokesperson for the minister’s office of diversity, inclusion and youth, emphasized in an email to JI on Tuesday night that the Canadian government “understands that the responsibility to combat antisemitism and Islamophobia is a non-partisan issue.”

“Invitations were sent to Parliamentary critics, members of Parliament, Premiers and those who expressed interest,” Strickland said. “The Federal Anti-Racism Secretariat has been working quickly and diligently to ensure anybody who wants to be there, can be. At this time, all four leaders of the opposition have been invited to participate as observers, to ensure the summit remains a space where community members can express their opinions and ideas.”

Strickland did not respond to a follow-up email seeking information on when an invite had been extended to Paul and whether it had been issued after her recent Twitter statement.

A Green Party spokesperson told JI that Paul “received a link to observe the summit, not to participate,” at 7:16 p.m. last night.

In conversation with JI, Paul seemed bewildered that her status as Canada’s sole Jewish federal party leader had not immediately merited her inclusion in a government-mediated discussion of antisemitism.

“I’m learning a lot that I could share about what it’s like to be a Jewish person in this kind of environment,” Paul averred. “We have not occupied these kinds of roles historically in Canada, and it’s something valuable that I feel is being left out in this event. I just think that that’s a sad thing.”