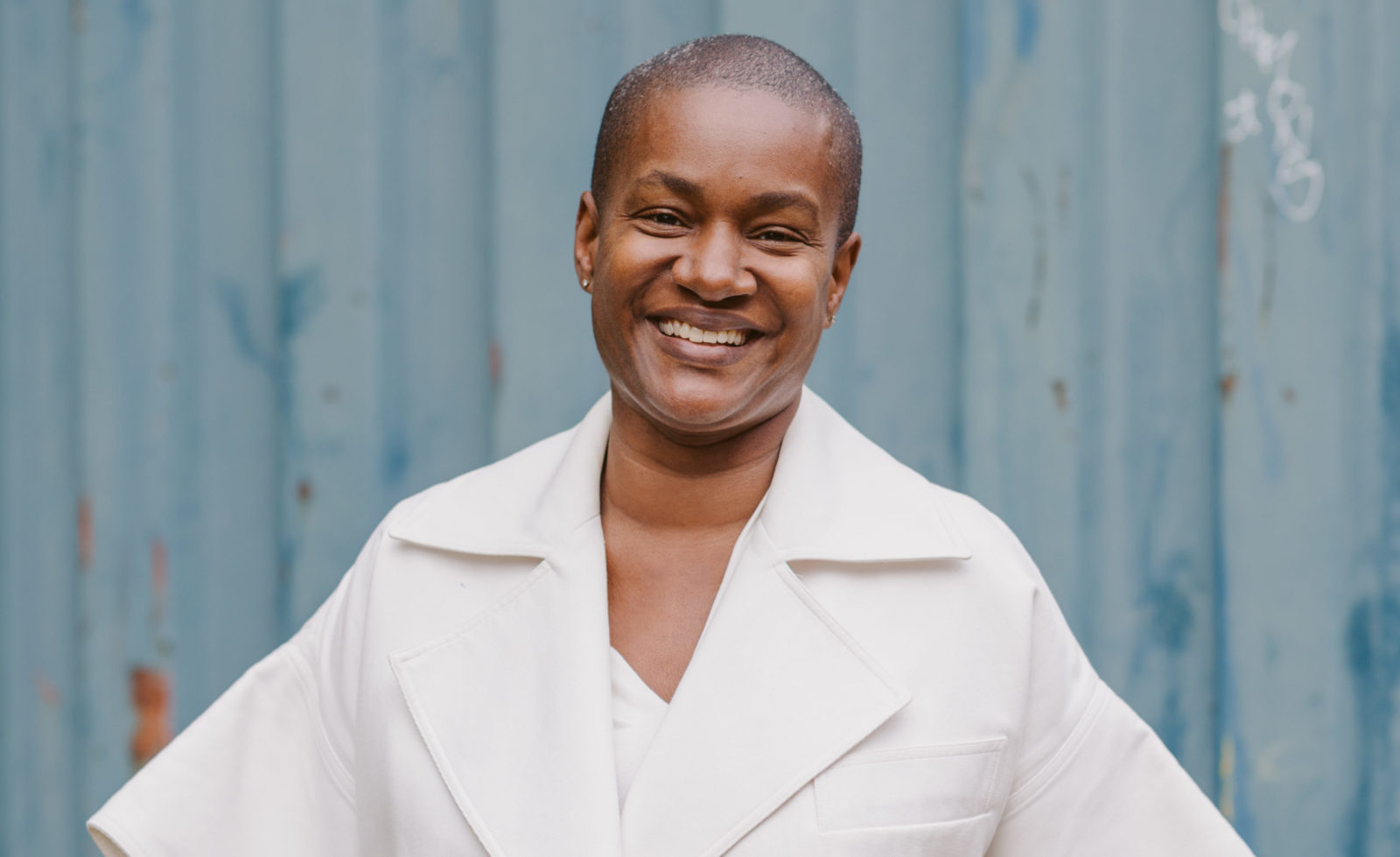 Earlier this year, Annamie Paul became both the first Jewish woman to helm a federal party in Canada and the first Black party leader in Canadian history

On Wednesday evening last week, Annamie Paul, Canada’s newly elected Green Party leader, gathered with friends and family for a virtual menorah lighting ceremony on Zoom. Ever since she clinched the leadership role nearly three months ago, Paul has kept up a demanding schedule, including hundreds of events and interviews, but with Hanukkah in full swing, she seemed grateful for the opportunity to briefly slow down and reflect on her achievement in the company of those who are close to her.

“I’m incredibly moved somehow,” Paul, 48, told the group. “I don’t know what exactly it is. I think it’s a combination of things: being with so many people that I have not seen for a long time, seeing some people for the first time that I’ve spoken with on the phone but never actually seen face to face, knowing that we’re celebrating Hanukkah — and that I am the first Jewish woman as a federal leader to be able to do this, and the first Jewish person since 1975.”

Paul, a lawyer who lives in Toronto with her husband and two sons, broke a number of barriers when she prevailed through eight rounds of ranked-ballot voting and emerged victorious in early October to become not only the first Jewish woman to take the helm of a federal party in Canada, but also the first Black party leader in Canadian history.

“Those were a lot of firsts packed into one person,” Paul told Jewish Insider in a recent interview, noting that she didn’t try to make her identity a central part of her campaign but recognizes that it may have inspired some supporters.

Still, Paul acknowledges that the historic win may give her increased license to help reshape her party’s image, which is often associated with environmental advocacy. “But that’s not really the source of everything,” said Paul, emphasizing her ambition to bring new attention to a broader array of social policies on which, she argues, her party has been at the forefront, such as instituting a guaranteed livable income and decriminalizing illicit drugs.

“I do believe that being who I am gives me more scope to talk about those things because my background — being a Black woman, being a Jewish woman, all of these things — allows people more readily to imagine that I may have other things that I care about beyond the climate,” she mused. “If I talk about affordable housing or urban poverty or systemic discrimination, people don’t question why I’m talking about things, even as a Green Party leader, because of who I am.”

The daughter of Caribbean immigrants, Paul grew up in a Jewish neighborhood in Toronto and has always felt something of an affinity for Judaism. “It was a space and a culture and civilization that I became familiar with at a relatively early age,” Paul told JI. In law school, she met her husband, Mark Freeman, a human rights lawyer who is Jewish. “It was very clear to both of us that we wanted to have a Jewish life and raise a Jewish family,” Paul recalled. “It was something that I knew I would do at some point.”

Paul was drawn to Judaism, she said, because it felt to her like a civilization that is grounded in religion but extends well beyond matters of faith. “The value that was placed on human life, the recognition of our interconnectedness, those were things that really attracted me,” she said. “When I think about it in terms of my life and how I live my life, it’s very attuned and aligned.”

She converted in 2000 during her time at Princeton University, where she received her master’s in public affairs. Her spiritual guide was Rabbi Jim Diamond, the university’s Hillel director, who died in a car crash in 2013. “He was a wonderful mentor,” said Paul, who spent a year studying closely with Diamond. “I knew a lot more than Rabbi Diamond expected,” she said with a laugh, citing her childhood experience parsing Old Testament passages alongside her grandmother, whom Paul described as a religious Christian.

“It’s been 20-plus years now, and it’s an important part of my life,” Paul said of her faith. “We have two kids, and they’re both bar mitzvahed, one in Spain and one here in Toronto.”

Rabbi Edward Elkin, who leads the First Narayever Congregation in Toronto, the independent synagogue where Paul’s younger son had his bar mitzvah, told JI that he followed Paul’s race for the Green Party leadership with interest. “She cares very deeply about Judaism, about the Jewish people, about Israel, and really takes great pride in being the leader of a federal political party in Canada who is Jewish,” he said. “Obviously it’s not her only identity, but it’s a very sincere and central part of her identity.”

“Her prominence as a Jewish woman of color,” Elkin added, “helps us to remind ourselves within the Jewish world that there are Jews of color and they have a voice and a presence and they’ve got a lot to contribute to society at large but also to the Jewish community.”

Elkin’s enthusiasm notwithstanding, Paul was subject to a litany of antisemitic and racist attacks throughout her campaign, including from members of her own party, one of whom, invoking an antisemitic trope, suggested that a reporter should follow her into a synagogue “to observe her membership drives and fundraising.”

Paul fought back against such rhetoric in a July essay for the Canadian Jewish Record, responding to an incident at a virtual debate in which bigoted language appeared on-screen.

“The moment it became known that I was Jewish, I was bombarded with questions about my positions on Israel, the Boycott, Divestment and Sanctions campaign and the proposed annexation of West Bank territories,” Paul wrote. “Despite having posted public statements on these matters, questions persist. My loyalty to Canada has also been called into question, and I have been accused of taking bribes from Israel, leading a Zionist take-over of the Green Party of Canada and of spreading hasbarah.”

Paul’s views on Israel are, at least from an American standpoint, primarily aligned with the liberal advocacy group J Street, says Richard Marceau, vice president of the Centre for Israel and Jewish Affairs and a former member of the Bloc Québécois.

Paul, who has visited Israel twice because her husband has family there, supports a two-state solution to the Israeli-Palestinian conflict and opposes annexation as well as the BDS movement. In August, Canadians for Justice and Peace in the Middle East and Independent Jewish Voices Canada, both non-profit organizations that support BDS, prepared a report evaluating the Green Party leadership candidates on Middle East issues. Paul ranked last, earning a C-.

Coming in first with an A grade was Dimitri Lascaris, a lawyer and anti-Israel activist who ran for Green Party leader and lost to Paul in the final round of voting. Two years ago, Lascaris came under fire when he suggested that two Jewish members of Parliament were more loyal to “apartheid Israel” than their own party — accusations Canadian Prime Minister Justin Trudeau described as “vile antisemitic smears.”

Lascaris is no outlier in the Green Party, according to Marceau. In 2016, the party passed a controversial resolution supporting BDS over the objections of former longtime Green Party leader Elizabeth May, who stepped down from her role last year. May considered resigning in protest of the resolution four years ago but found compromise with a revised policy whose first bullet point called “on the legitimate representatives of the Palestinian people and the State of Israel to accord mutually recognized statehood.”

Marceau expressed hope that Paul would push back against BDS during her tenure as Green Party leader. “I think she brings a lot to the discussion,” he said. Still, he argued, Paul could often find herself swimming against the current. “If she wants the party to look like her and sound like her, she has work to do.”

Paul is well-attuned to international affairs thanks to her years working abroad in Europe. In Brussels, she was a political affairs officer at Canada’s mission to the European Union, later serving as an advisor for the International Criminal Court and as the director of a conflict prevention organization called Crisis Action. In 2014, she founded the Barcelona International Public Policy Hub, which advises international NGOs.

But Paul made clear in conversation with JI that she is largely focused on domestic concerns, noting that she had no immediate plans to visit Israel again because she is trying to reduce her carbon footprint.

The Green Party, founded in 1983, has always been something of an underdog in Canadian politics. It currently holds just three seats in Parliament, all of which are in the lower chamber formally known as the House of Commons. By comparison, the Liberals hold 156 seats in the House of Commons, the most of any party, while the Conservatives occupy 121.

Last year, Paul tried to expand the party’s federal presence but lost her bid for a seat in Parliament. She tried once more in a recent October by-election shortly after claiming victory in the leadership race, but lost again.

Despite her defeat, Paul sees it as a promising development that she was able to come in second place with nearly 33% of the vote in a district that has long been regarded as a Liberal Party redoubt. “I really believe that that tells us that people are willing to take a chance on something new,” Paul said, noting that the coronavirus pandemic has only underscored the need for Green Party policies like affordable housing and universal pharmacare.

In her first few months as party leader, Paul has been working around the clock to introduce herself to Canadians while giving them a sense of her approach. Though her relatively low profile in national politics may hinder her effort to popularize Green Party talking points, she believes that the pandemic has forced Canadians to rethink their priorities and embrace a new path forward. “I think it’s very clear that people don’t want to go back to where we were,” she told JI.

“Around the world, when Green Parties make breakthroughs, it’s usually in moments like that, in moments of disruption,” Paul said, “moments where people are ready to take a leap.”