The secret to Israelis’ startup success?

In ‘Chutzpah,’ former 8200 officer Inbal Arieli details why Israelis are so sought after in the business world 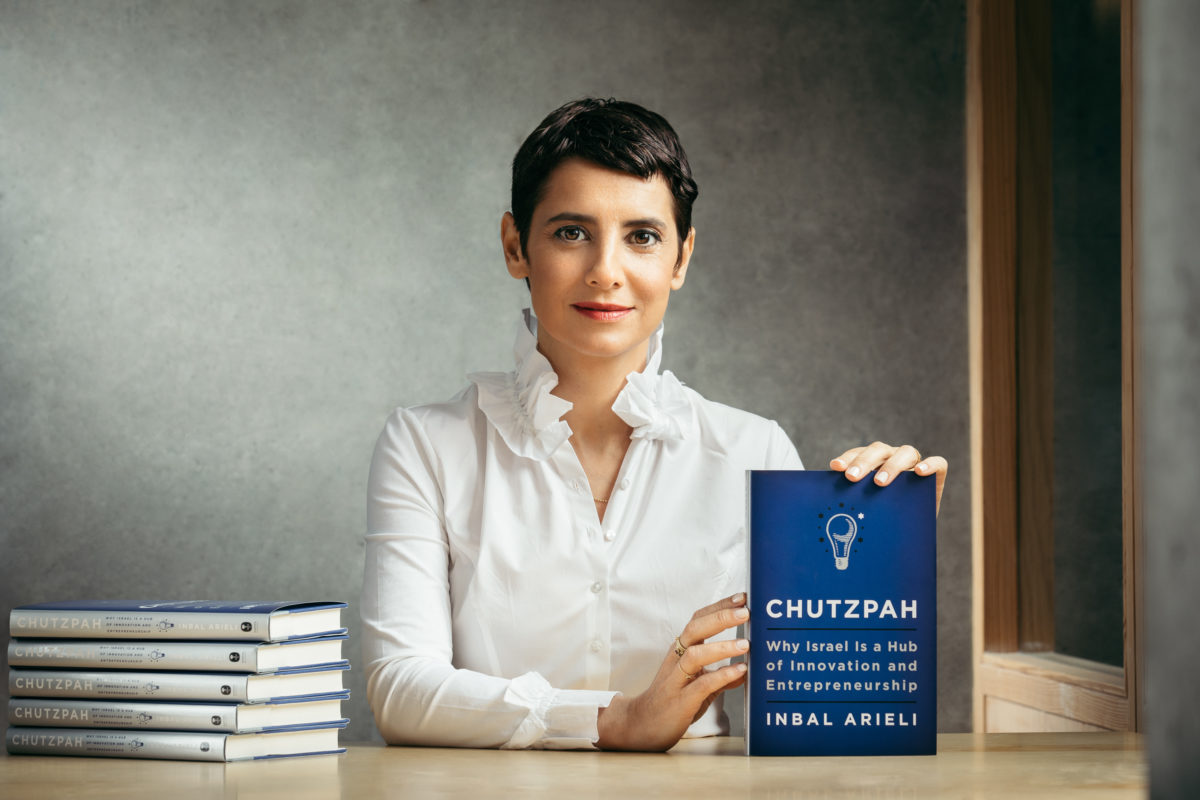 You could read Inbal Arieli’s new book, Chutzpah: Why Israel Is a Hub of Innovation and Entrepreneurship, as a guide to business innovation or parenting. Either way, Arieli’s ideas are likely to raise eyebrows among some Americans, which is in many ways exactly what the author wants.

Chutzpah paints a remarkably sunny picture of Israeli education and parenting, portraying the country’s societal approaches to upbringing as the ideal breeding ground for innovation, entrepreneurship and startup success.

With her close-cropped cap of dark hair and seemingly boundless energy, Arieli is a modern Israeli powerhouse. The author, entrepreneur, hi-tech executive and mother of three boys has lectured around the world on Israel’s cultural and societal edge, sparking the idea for her to pen Chutzpah.

“I think Israeli kids are actually training the relevant muscles that will enable them in the future to adapt to the future, whatever that will be,” Arieli told Jewish Insider during a recent interview in Tel Aviv. And though the kibbutz model is long in the past and approaches to parenting are ever-changing, “in the context of entrepreneurship and in the context of innovation… I’m very optimistic about what’s happening in Israel.”

Arieli’s book traces the upbringing of the average Israeli — from nursery school through childhood to enlisting in the army and even the prevalent practice of a post-army trip around the world — through the lens of preparing them for life as an entrepreneur. Every step along that journey, she argues, equips Israelis with the skills and savvy to be successful in the start-up economy.

Arieli herself has forged a path not dissimilar from many of her peers in Israeli hi-tech. After serving in Unit 8200, the IDF’s elite intelligence unit, she received a law degree and worked as an attorney before shifting to the technology sector and earning an MBA at Tel Aviv University, going on to work at a variety of prominent Israeli start-ups. In 2017, she became the co-founder and co-CEO of Synthesis, which calls itself an “assessment and development company that helps existing and future leaders reach their full potential.”

And now — after 20 years in Tel Aviv’s hi-tech scene — she’s ready to share her views with the world at large. Helicopter parents — and others at varying points along the parenting spectrum — could take issue with Arieli extolling the virtues of kindergarteners playing in a junkyard, children setting their own bonfires, and the army handing a rifle to every 18-year-old in the country. But Arieli believes that everyone who reads Chutzpah can take the concepts behind it to their own conclusions.

Those principles include instilling in young people the tools to explore without fear, to innovate and experiment from a young age, to be independent and take on responsibility as teens and to not be afraid of failure.

When it comes to her three sons, ages 17, 14 and 10, “nobody really knows what their job environment will look like” in five, 10 or 20 years, she said. “That’s the only certain thing I know: That I don’t actually know… I can’t really prepare them for that. But what I can do is provide them with the skills and capabilities and confidence and flexibility and agility to actually adapt to whatever the circumstances will be in the future.”

In the introduction to Chutzpah, Arieli points to the April crash landing of the Beresheet moon lander as the perfect example of Israeli audacity, daring and courage. Its failure, she said, doesn’t in any way negate its incredible success story.

“The fact is that these three founders of Beresheet had an incredible, crazy, crazy idea,” she said. “And they managed to have so many people join their crazy idea and execute it in a way which is super innovative, very creative and extremely efficient.”

Of course, Arieli said, “I hoped and wished for it to succeed. But is that the most important thing in the whole process? Not at all. Not for me and I don’t think for them. Not for the IAI [Israel Aerospace Industries] and not for the tens of thousands of Israeli school students who were exposed to that project in the course of the past five years.”

Arieli has had her own experiences with failure, and with learning to bounce back from such events. In 2006, she joined the start-up Modu, a mobile phone company helmed by Dov Moran, a serial entrepreneur best known as the inventor of the USB memory stick. Modu raised more than $120 million and recruited more than 200 employees. But within just a few years, the company went bankrupt and shut its doors permanently.

“When there’s such a big failure like Modu or any other failure, it’s not that you have failed, it’s not that I’m a failure,” she said. “It’s that circumstances, decisions, actions, lack of decisions… have led to this situation.” And, she said, everyone can learn from those experiences: “The more you fail, the more small failures you have, the better you train yourself to continue and try until you succeed.”

While Arieli’s path to success might be familiar to many Israelis, she’s still a minority in the hi-tech industry merely by virtue of being female. But she is working to counter that fact — and is already witnessing change.

“We need to ask ourselves — mothers, fathers, executives, anyone — what can we do to bring more women into these positions. And to encourage more women and young girls to take on these positions and to encourage more men to incorporate women,” she said. Today, she said, “the statistics today are not high enough and not equal enough, but they’re definitely in a different place than just five years ago and 10 years ago.”

Arieli herself is a prolific mentor to other women in tech, and is confident the trends will continue to shift. “I’m optimistic,” she said. “I see the change. I see more and more women coming to conferences, on stage speaking at tech conferences. I see more and more role models, women founders, women investors telling their stories. And these role models, these stories are actually inspiring and affecting the younger generation.”

Despite lecturing about Israeli innovation and entrepreneurship around the globe, Arieli said she has been pleasantly surprised to never once encounter efforts to boycott or protest her because she is Israeli and an IDF veteran. The absence of the BDS movement from the world of business and hi-tech, she said, is a conundrum she has yet to fully solve.

“I’ve never been asked a political question,” she said. “None of my talks have ever been stopped or protested. And it made me wonder how come?” After contemplating the issue, Arieli believes that “in the world of innovation, in the landscape of entrepreneurship, Israeli technology innovation is so successful in its accomplishments that… it’s just impossible to highlight it as a negative thing.”

Despite the moderate successes BDS has found in the cultural realm, Arieli said in the business world, “the opposite is happening. People seek out Israelis, they understand that Israel plays a very important role in innovation and technology worldwide.”