The president, vice president, first lady and second gentleman welcomed Jewish leaders from around the country 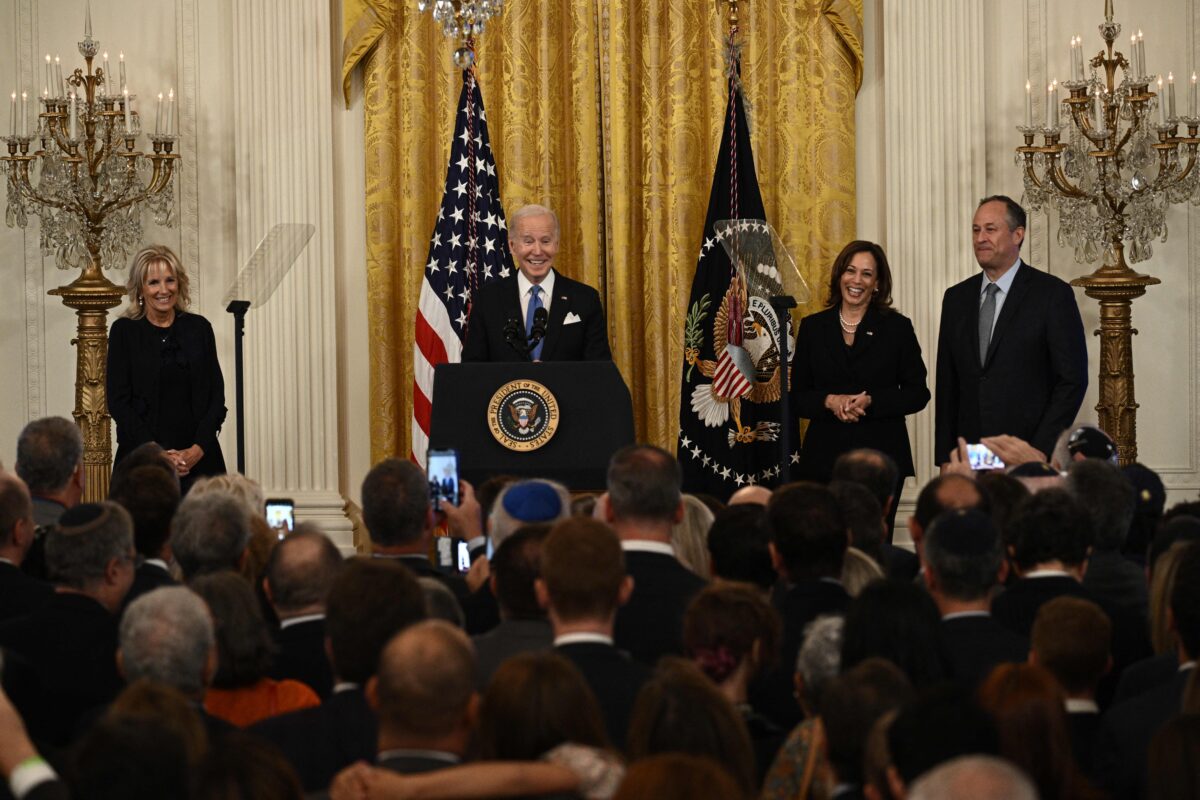 It was a scene reminiscent of the lobby of any synagogue, or a kiddush luncheon after the conclusion of Shabbat services: Hundreds of Jews gathered in one big room, schmoozing and saying “Shana tova” and enjoying some brisket and challah.

These were the leading figures of American Jewish life — rabbis and educators; activists, politicians and policymakers; nonprofit professionals and lay leaders — but instead of meeting outside of Yom Kippur services, they were standing under glistening chandeliers in the White House’s stately East Room for the first-ever White House Rosh Hashanah event.

“If I acknowledge everyone by name, we’ll be here [until] the Hanukkah reception in December,” President Joe Biden joked at the start of his remarks.

He mentioned Rabbi Michael Beals of Congregation Beth Shalom in Wilmington, Del., a synagogue in Biden’s hometown. “That’s where I received my education. I probably went to shul more than many of you did,” he said. “It’s been a home, and over the years, we’ve shared deep conversations about faith and finding purpose.”

Biden addressed the crowd, with many Jewish Democratic leaders, to loud cheers and applause. He quoted the Talmud and the late British Chief Rabbi Lord Jonathan Sacks, offering what amounted to a D’var Torah that applied Jewish teachings to his policy agenda.

“The late Rabbi Jonathan Sacks, who passed away two years ago, once said that the most important lesson of the High Holidays is that nothing — nothing — is broken beyond repair,” Biden said. “We’ve emerged from one of our most difficult moments in our history. I believe nothing is broken beyond repair, and there’s a lot we can do to change things and bring people together.”

Biden referred to the violent 2017 Unite the Right rally in Charlottesville, Va., that he has said inspired his presidential campaign, saying that he wanted to “stand[…] up to antisemitism that was constantly lurking in the shadows.” He shared a reflection from his trip to Israel in July, which included a visit to Yad Vashem, where he met two Holocaust survivors.

“I think that after all they experienced in the ‘40s, today they’re witnessing a record high antisemitism in 2022 they never thought would be the case again,” said Biden. He touted his record on fighting antisemitism and extremism, mentioning a recent summit that tackled hate-fueled violence, his administration’s support for increased funding for the Nonprofit Security Grant Program and the creation of a national strategy for fighting hate-based violence.

He gave a shout-out to Deborah Lipstadt, the State Department’s special envoy to monitor and combat antisemitism. “Where are you, Deborah? All the way in the back. That’s usual with her, humility,” said Biden.

Biden, First Lady Jill Biden and Second Gentleman Doug Emhoff all began their remarks by mentioning the impact of Hurricane Ian. “This reception comes at a very difficult time for so many Jewish families in Florida, possibly for some of you who have loved ones in Florida, mothers, fathers, grandparents, friends,” said Biden.

“Temples will be shuttered on Yom Kippur,” Jill Biden acknowledged, “and some will have to break their fast without beloved family beside them.”

The most memorable moment for many was a surprise performance by Israeli-American violin virtuoso Itzhak Perlman, who performed the prayer “Avinu Malkeinu” from the High Holidays liturgy. Guests sang along.

The Bidens used to host a Rosh Hashanah reception at the Naval Observatory when Biden was vice president, a gathering that was much less formal than the White House event.

“He would kind of yuk it up and talk about whoever was coming to pose with him and Dr. Biden [in the photo line],” said Matt Nosanchuk, president and co-founder of New York Jewish Agenda who served as the White House liaison to the Jewish community in former President Barack Obama’s administration.

Biden did not stick around long to chat with attendees, but he did borrow the phone of National Council of Jewish Women’s Chief Policy Officer Jody Rabhan to take a selfie with a couple dozen people. The event’s guest list was intended to reflect the diversity of the U.S. Jewish community, with efforts made to ensure representation of Jews of color, Orthodox Jews and LGBTQ Jews, according to officials with knowledge of the event plans.

“We are very grateful that we get to continue in the tradition that they set forth,” Emhoff said, referring to the Bidens’ famous Naval Observatory gatherings. “The doorposts there are protected by mezuzot — that’s two mezuzahs. We hosted a Passover Seder. We’ve lit a historic menorah for Hanukkah. But now, we gather in the White House during the Days of Awe.” His wife, Vice President Kamala Harris, was present but did not give a speech.

Later in the day, Biden spoke by conference call to 1,200 rabbis in an annual High Holidays tradition.