A spokesperson for Frost said the politician 'believes that a two-state solution, and subsequent policies that lead to it, is the strongest and quickest path toward peace for both Israelis and Palestinians' 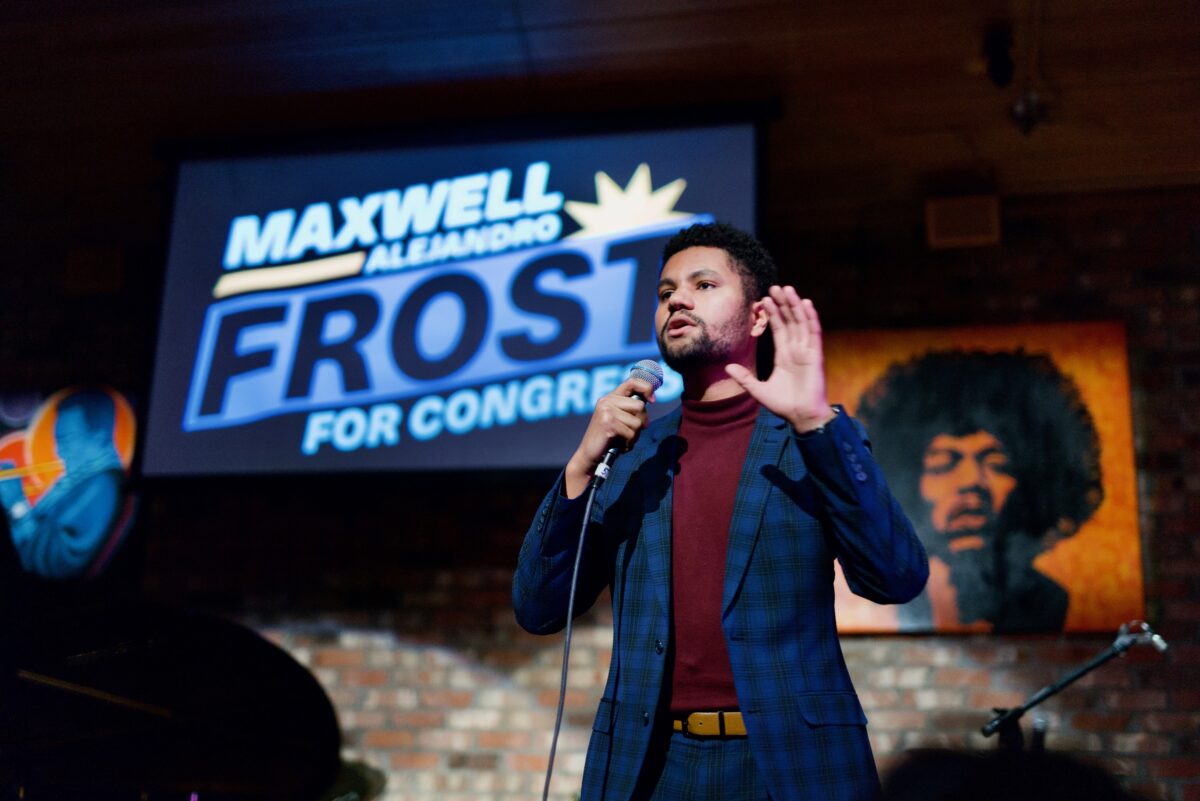 Last Tuesday, Maxwell Alejandro Frost burst onto the national stage as he claimed victory in a Democratic primary for an Orlando-area House seat, where he is now poised to become the first member of Generation Z elected to Congress.

The 25-year-old progressive activist has received accolades from a chorus of prominent elected officials who endorsed his bid. “Woo-hoo!” cheered Elizabeth Warren (D-MA). “We need to listen to young people and let them lead,” Sen. Ed Markey (D-MA) said. “Another progressive win,” declared Sen. Bernie Sanders (I-VT), who also supported Frost. He added: “I very much look forward to working with him.”

But at least one group wasn’t so pleased with Frost’s historic campaign.

On the evening before the primary, Florida Palestine Network (FPN), a local advocacy group, released a furious statement charging that Frost had “chosen to be on the side of injustice” and “does not stand for human rights” because of his approach to Israel.

The statement alleged that Frost had “lied and deceived his early supporters” within the pro-Palestinian community when — in comments to Jewish Insider published just a couple of weeks before the primary — he embraced positions at odds with sentiments he had expressed months earlier during a private conversation with FPN.

In a candidate questionnaire solicited by JI, Frost had voiced support for continued U.S. military assistance to Israel and rejected the Boycott, Divestment and Sanctions movement as “problematic,” among other things.

He had not previously clarified his Middle East policy views on the record.

But the FPN statement, which was written anonymously and posted in a Twitter thread last Monday, said Frost had presented a different front in a Zoom conversation this past March, where FPN claimed he “committed to ending military aid to Israel” and “supporting” the BDS movement.

During the meeting, Frost also “promised” not to distribute a Middle East position paper without “the approval of FPN,” the statement said. FPN accused him of breaking that vow, however, claiming it was “shocked to learn” that Frost had written what the statement criticized as an “anti-Palestinian” position paper without seeking input from the group. “This is not who we want representing us in the halls of Congress,” FPN said.

In the paper, which was obtained by JI and first published earlier this month along with the questionnaire, Frost had described himself as  “pro-Israel” and “pro-Palestinian,” while pledging to support funding for U.N. agencies that serve Palestinians.

He had also argued in favor of “robust U.S. assistance that benefits the Palestinian people,” as long as it remains “in compliance with the Taylor Force Act,” he wrote, referring to a U.S. law that withholds aid to the Palestinian Authority until it ends payments to families of Palestinians convicted of terrorism.

In response, however, FPN accused Frost of turning his back on pro-Palestinian organizers who had “assisted” in “powering his campaign.” The group demanded an “immediate apology” as well as a “recommitment” to “centering Palestinian human rights,” including “ending military aid” and backing the BDS movement.

FPN did not respond to requests for comment from JI.

A spokesperson for the Frost campaign confirmed the meeting had taken place but said, without elaborating, that he did “not agree with FPN’s accounting of the events.”

“Maxwell is someone who wants to lean in with different folks on a wide variety of issues,” the spokesperson said in a statement to JI. “He believes that a two-state solution, and subsequent policies that lead to it, is the strongest and quickest path toward peace for both Israelis and Palestinians.”

According to the spokesperson, Frost spoke with a wide variety of “individuals and organizations” as he wrote his position paper, which largely embraces a mainstream Democratic approach to Middle East policy.

“After many conversations with people of different opinions on the issue over several months,” the spokesperson told JI, “Maxwell drafted a position paper and then solicited feedback from individuals and organizations that held various perspectives.”

Among them was Democratic Majority for Israel, according to a person familiar with Frost’s engagement who asked to remain anonymous to discuss a sensitive issue. Frost had reached out directly to the group months before the primary ended to start a dialogue, the person told JI, even as DMFI’s political arm had already endorsed one of his top primary opponents, moderate state Sen. Randolph Bracy.

DMFI had originally been cautious about Frost’s approach, owing in part to a handful of past social media comments in which he had posted about attending a pro-Palestinian rally but otherwise made no mention of Israel.

In its Twitter thread, FPN included footage of a pro-Palestinian demonstration last year in Orlando, where Frost had delivered remarks amid escalating violence between Israel and Hamas in Gaza. “We have to demand — not ask — we have to demand that our leaders see the world through the eyes of the most vulnerable,” he said.

But as DMFI became involved in an ongoing conversation with Frost, the group felt comfortable that their views were aligned, the person told JI. Ultimately, DMFI stayed out of the race and did not spend money on Bracy’s behalf. He came in second last week with 25% of the vote, losing to Frost, who had also outraised him, by 10 percentage points.

The Frost campaign spokesperson confirmed that Frost had spoken with DMFI but did not elaborate on the details of their discussions. “As an organizer, Maxwell has always sought to bring people together across points of difference and remains dedicated to doing that in Congress,” they told JI.

Elsewhere in his position paper, Frost warns that conditioning U.S. aid to Israel will “undermine Israel’s ability to defend itself against the very serious threats it faces.” The security risks, he writes, are “far too grave.”

The paper concludes with a harsh assessment of BDS, whose tactics Frost criticizes as “extremely problematic,” “counterproductive” and “automatically disqualifying” because the movement, he says, “does not seek a future that includes both Israel and Palestinians together.”

Keith Dvorchik, the executive director of the Jewish Federation of Greater Orlando, said he was “pleased to see” Frost’s paper “based on what the potential concerns were.”

Frost is favored to win the general election in Florida’s newly drawn 10th Congressional District, where outgoing Rep. Val Demings (D-FL) is now running for U.S. Senate. He will face off against Republican nominee Calvin Wimbish.

Freshman Rep. Richie Torres (D-NY), who has championed pro-Israel causes during his first term in the House, said Frost’s election “will represent a long-overdue generational shift in the membership of Congress.”

“Whenever I’ve spoken to Maxwell about public policy, he never pretends to have everything figured out,” Torres, who endorsed Frost, told JI. “He’s open to listening and learning.”