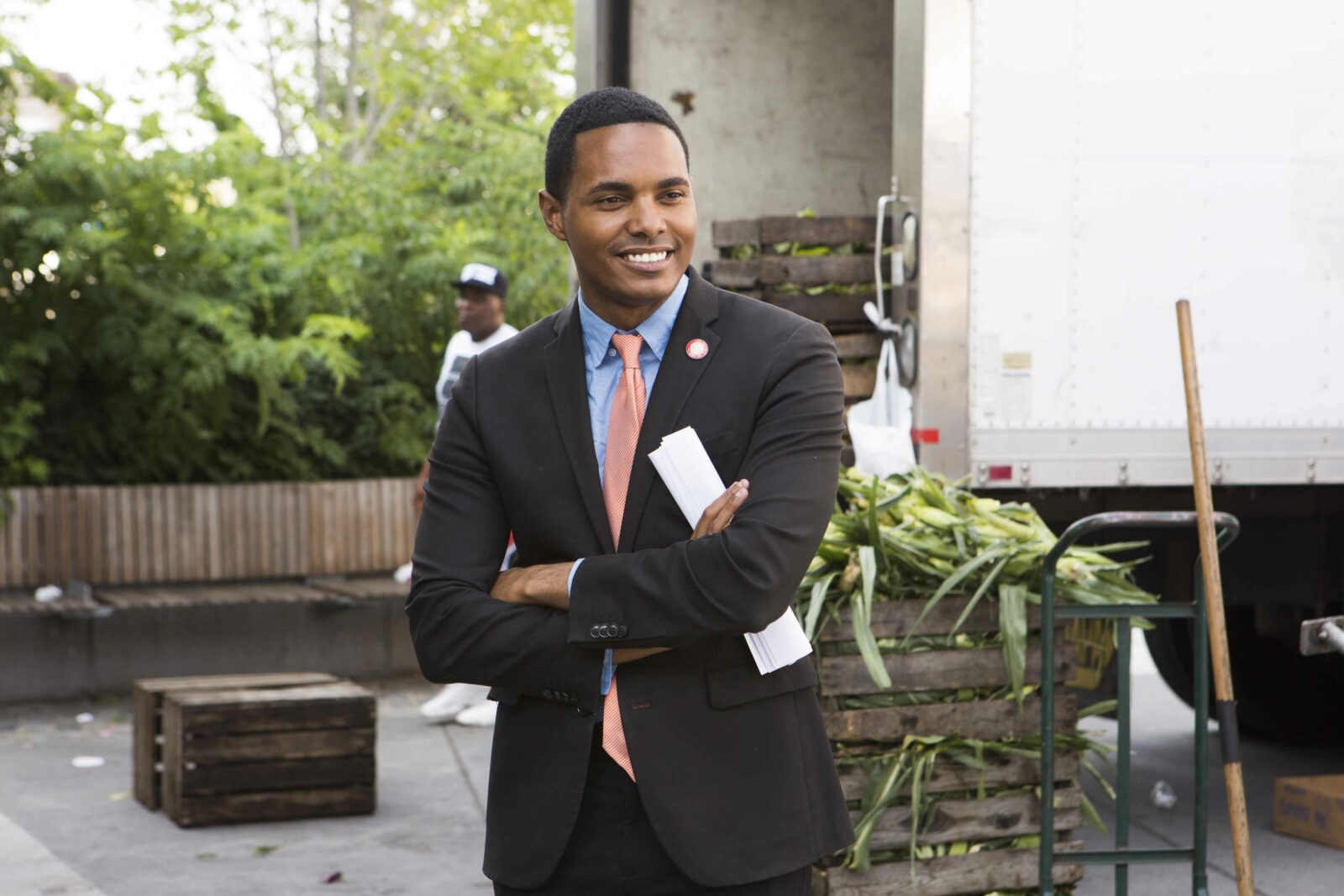 Ritchie Torres: ‘I am the embodiment of a pro-Israel progressive’

“I am from the Bronx, I'm Afro-Latino, I'm Puerto Rican, I'm a millennial — but I'm also pro-Israel.”

Notable firsts: New York City Councilmember Ritchie Torres made history in 2013, when at age 25 he became the youngest elected member in the council’s history. Now mounting a run for New York’s open 15th congressional seat, the former community activist and housing organizer would be the first openly gay black or Latino member of Congress.

Street cred: Torres doesn’t see himself as a history-maker. “There is a historical dimension to my candidacy, but, ultimately, I am running on the strength of my personal story and message. I have a strong record of advocating on the bread-and-butter concerns that matter most to the residents in my district,” Torres told Jewish Insider over a latte and croissant at a cafe in Lower Manhattan. At several points during the hour-long conversation, Torres went out of his way to highlight his support of Israel.

Similar on the surface, distanced in credo: If elected, Torres will be 32 when he is sworn in, which would make him one of the youngest members of Congress, along with Rep. Alexandria Ocasio-Cortez (D-NY), whose district adjoins his. But Torres, who was a Bernie Sanders delegate to the Democratic National Convention in 2016, doesn’t see himself seeking an alliance with Ocasio-Cortez, vowing not to court the far-left Democratic Socialists of America or accept the endorsement of any group that supports BDS. “My concern is that BDS poisons whatever it touches. There is a deep rot of antisemitism at the core of BDS, and I view it as an insidious form of antisemitism. I am concerned about the normalization of BDS within the progressive movement, and I worry deeply that BDS has the potential to poison progressivism.”

On comparisons to another trailblazer: Torres is animated when discussing policy debates within the Democratic party. A skilled orator who speaks in measured tones and maintains a calm composure, Torres shrugged off comparisons to former President Barack Obama, himself a history-making organizer-turned-politician from one of America’s largest cities. “Um,” he said after pausing for a few seconds, “I wouldn’t presume to think of myself as Barack Obama. I insist on running as my own person. I am not running to be the reincarnation of somebody else. Even though I’m young enough to be a change agent, I have been in a position that has required me to be pragmatic.”

The numbers: Torres has so far outraised the other 10 Democrats vying to replace outgoing Rep. Jose Serrano in the solidly blue district in next June’s primary. As of the last quarter, Torres raised $878,084 for his campaign, according to Federal Election Commission filings. Data compiled by The City showed that at least $110,000 of that came from contributors with ties to the real estate industry, with some 96 percent of his contributions coming from outside the district, something he says is a reality for every candidate in the district.

“First, all of my opponents have primarily raised their funds outside of the Bronx because the south Bronx is the poorest congressional district in America,” he explained. “You cannot raise a million or even a half a million dollars from the poorest congressional district in America. Second, in the second quarter, two-thirds of my contributors were small donors. I have the highest number of Bronx donors of all my opponents, and I have the highest number of small donors. So I feel comfortable about the fundraising numbers.”

The Park Ave pitch: “My supporters see me as a pragmatic problem-solver who is thoughtful, who is committed to building consensus and common ground. There’s a real concern about the loss of pragmatism in our politics, and there’s a real market for the kind of pragmatic progressivism that I represent.”

The opponents: The young lawmaker sought to differentiate from the other candidates, which include his City Council colleagues Rubén Díaz Sr. and Ydanis Rodríguez, Assemblyman Michael Blake, and former Council Speaker Melissa Mark-Viverito. “I have the strongest legislative record. There’s no candidate in the race who has held more high-profile hearings, who has passed more high-profile legislation, who has conducted more high-profile investigations than I have, on a wider range of issues as I have,” he pointed out.

Controversial rival: Díaz, viewed as one of the favorites in the race, is notorious for his anti-LGBT provocations and has compared abortion to the Holocaust. “His views are so out of sync with the Democratic Party that he has no business running in a Democratic primary,” Torres charged. “He has more in common with the Christian right than he has with the mainstream of the Democratic Party.”

Role models:  “[Massachusetts Senator] Ted Kennedy is a model of pragmatic progressivism. He was a man of deeply held principles, he was a progressive conscience of the Democratic party, but at the same time he was pragmatic enough to broker compromises across the aisle that moved the ball forward.” Torres also looks up to Rep. Hakeem Jeffries (D-NY), chairman of the House Democratic Caucus and a fellow New Yorker. “I’m a great admirer of Hakeem Jeffries. He is impressively discipline and even-tempered, intelligent. I have enormous respect for his skills as a legislator and as a political leader.”

Definition of progressivism: Torres, who first visited Israel in 2015 with a Council delegation, considers himself a strong supporter of the Jewish state “not despite my progressive values, but because of my progressive values.” He stressed, “I strive to keep an open mind. I am known to be pragmatic, open-minded and thoughtful, and I listen to all sides of debate, but as a wise person once said, ‘Keep an open mind, but do not keep your mind so open that your brains fall out.’ There is a difference between constructive and destructive criticism. Criticism of a country’s foreign policy, whether it’s American or Israeli foreign policy, is fair game. But the attempt to delegitimize Israel, the attempt to question Israel’s right to exist or right to defend itself, that, to me, crosses the line to destructive criticism. I consider anti-Zionism a form of antisemitism, and I am not going to give consideration to antisemitic voices, voices that are dedicated to delegitimizing Israel as a Jewish state.”

Pushback: When Torres visited Israel in 2015, far-left activists held a protest outside City Hall. “At the time I was instinctively pro-Israel — because it has democratic values and institutions — but I had no deep knowledge of the Israeli-Palestinian conflict, no deep knowledge of intersectionality, or of BDS. But when I announced that I was going on a delegation to Israel, I became a target of vitriolic protest,” he recalled. “I had activists from Jewish Voice for Peace accusing me of pinkwashing, accusing me of aiding and abetting apartheid. I even remember coming across an activist with a shirt that read ‘queers for Palestine.’ I remember telling the activist, ‘Does the opposite exist, are there Palestinians for queers?’ It was partly a joke but partly a serious observation. I found it utterly baffling that you had LGBT activists doing the bidding of Hamas, which is a terrorist organization that executes LGBT people. And then I came to realize that the reason is intersectionality, that the BDS movement uses intersectionality to penetrate a whole host of self-proclaimed progressive movements.”

On 2020 candidates expressing support for conditioning aid to Israel: “Support for Israel’s security should remain unconditional. Israel is more than a transactional ally. Israel is a friend, and the notion of threatening a friend with the loss of funding for its security needs strikes me as absurd. In what sense does that honor the very nature of friendship?” Torres further emphasized that while constructive criticism of the Israeli government’s policies is fair game, “rhetoric about conditioning aid to Israel strikes me as a dog whistle for the pro-BDS wing of the progressive movement.”

Face of the party: Torres also pushed back against Republican attempts to use Israel as a political football and paint legislators like Reps. Rashida Tlaib (D-MI) and Ilhan Omar (D-MN) as the face of the Democratic party. “I’m both progressive and pro-Israel,” he stated. “The notion that you cannot be both progressive and pro-Israel is a vicious lie, because I am the embodiment of a pro-Israel progressive. I am from the Bronx, I’m Afro-Latino, I’m Puerto Rican, I’m a millennial — but I’m also pro-Israel.”

Torres also believes that the decision by Israel to bar Tlaib and Omar from visiting the country was a mistake. “A robust democracy like Israel should never fear criticism. I doubt it will have lasting impact, but it was an attempt by Trump to politicize Israel.”

Command of the hour: “Support for Israel is built on a bedrock of bipartisanship, and that support has never been as threatened existentially as it is now. No matter where you stand ideologically on the spectrum, I think all of us who support Israel should recognize that there needs to be pro-Israel voices in both the Democratic and the Republican parties, in both the progressive and the conservative movements. And so I am deeply committed to not only sustaining but strengthening American support for Israel and strengthening the American-Israeli relationship.”