Investigators have ‘no idea’ why fake federal agent went to Iran 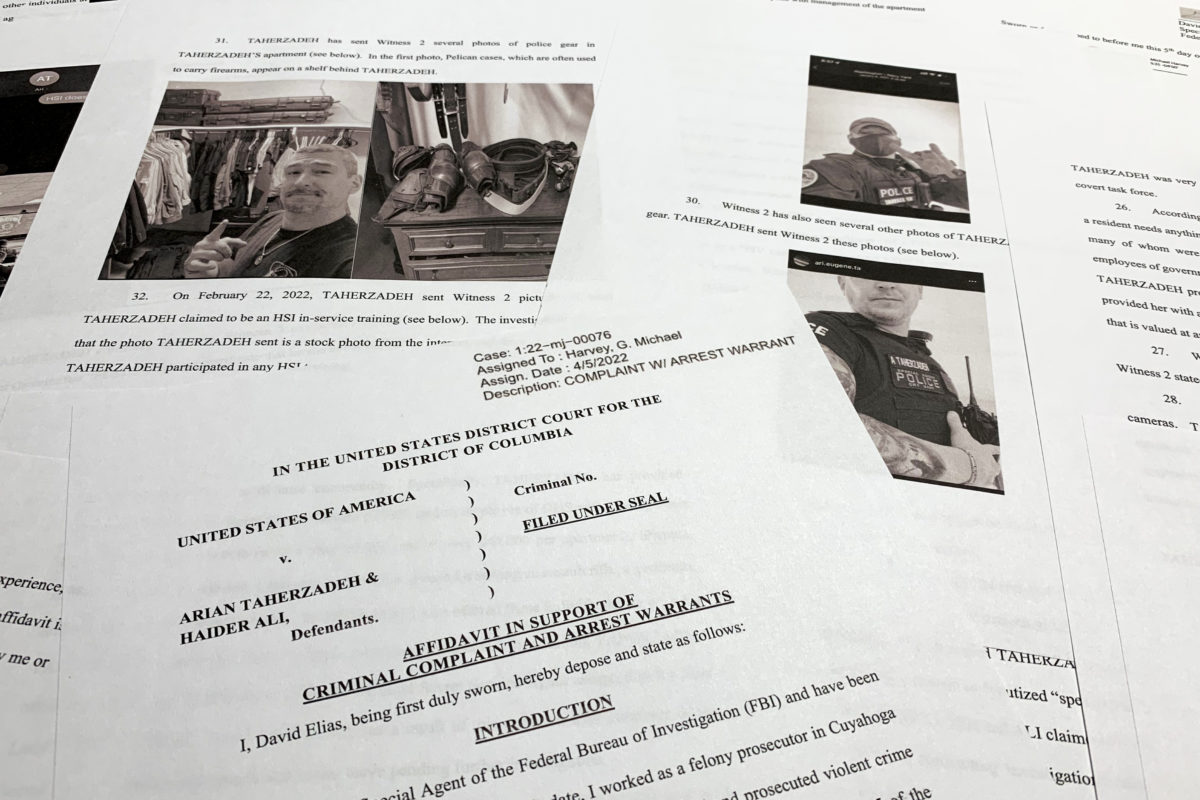 A hearing on Friday for two men accused of impersonating federal agents provided few additional answers about the potential motives or Iranian ties of two men federal authorities say attempted to ingratiate themselves to members of the Secret Service.

Haider Ali and Arian Taherzadeh were arrested in Washington, D.C., last week for allegedly carrying out an elaborate ruse to masquerade as Department of Homeland Security officers. Authorities say the two men, who were in possession of an array of guns, law enforcement gear and surveillance equipment, offered expensive gifts to federal authorities including members of the security details of President Joe Biden, Vice President Kamala Harris and First Lady Jill Biden.

Assistant U.S. Attorney Josh Rothstein said that Ali, who allegedly told a witness that he was affiliated with Pakistan’s intelligence service, had traveled to Iran twice in recent years. His passport contained an Iranian visa that expired in late January 2020, shortly before the alleged scheme began in February.

But, Rothstein said, “we have no idea why he went to Iran.” Ali — who prosecutors believe was born in Pakistan and became a dual U.S. citizen — had also traveled twice to Pakistan, once to Egypt and once to Iraq in recent years.

Taherzadeh allegedly told investigators in a lengthy interview last Wednesday that Ali was providing the funding for the scheme as of their arrest, but said he was unaware where the money was coming from.

Under questioning from Magistrate Judge Michael Harvey, Rothstein said authorities were not suggesting that Iran may have funded the scheme and are unsure where the funding came from or how much money was involved. Prosecutors said they are examining a large volume of evidence, including 30 hard drives.

Some of the expenses — including apartments in a luxury D.C. building with rents over $4,000 per month that were provided to two Secret Service agents — may have gone unpaid, the prosecutor added.

The prosecutor added that the landlord was in the process of evicting the men, an account supported by a Talking Points Memo report that an eviction suit was filed in July 2021, but did not proceed due to D.C.’s eviction moratorium.

Rothstein said authorities are also unsure whether the accused individuals requested anything from the federal agents involved in the plot.

Some observers have argued that the scheme — particularly the Iran visas Ali’s U.S. passport  — appears too amateurish for a professional Iranian intelligence operation.

Behnam Ben Taleblu, a senior fellow at the Foundation for Defense of Democracies focusing on Iran, told JI that the general outline of the scheme “does raise potential red flags for potential vectors of entry for foreign intelligence services,” and added that Iran has been involved in a range of attempted malign activities on U.S. soil for decades.

“Operationally, some may call this sloppy or questionable,” Taleblu said. “The fact that Secret Service Persons were indeed duped, did indeed receive materials from these men and did indeed benefit by living in rent-free apartments shows you how far the operation was able to go unimpeded and unnoticed… The threat from a sloppy foreign intelligence service is just as paramount as one that is a professional one.”

“The origins and story behind the Iranian visa, the alleged tie to Pakistan, as well as the multiple ties to the region should be sussed out both for law enforcement purposes and national security,” he continued. “Compromising U.S. Secret Service persons should not be an easy feat. It should not be something that is able to be achieved through a sloppy operation.”

He added that the timing of Ali’s trips to Iran in 2019 and early 2020 coincide with a period of rising U.S. pressure on Iran and accelerating Iranian activities.

Taherzadeh — who at one point was a deputized special police officer (a private security guard in D.C. with police authorities on specific properties)  — allegedly told investigators that he had begun lying about his affiliations with DHS and his lies had gotten away from him.

New witness statements released as part of court filings on Friday further indicate that the men may have been able to access any apartment in the building, which houses a number of government staffers.

The hearing will conclude on Monday afternoon.