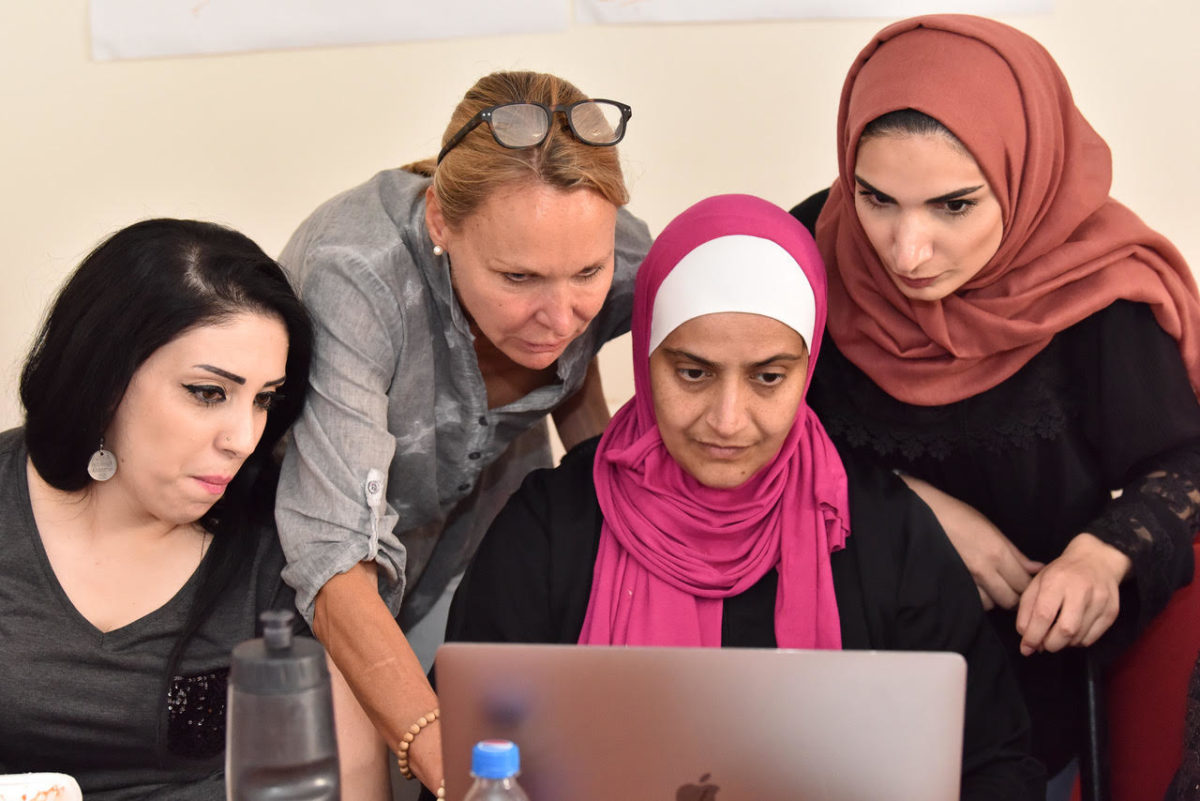 Women from Taghyeer, a Palestinian organization fostering communities and emerging leaders practicing nonviolence, working on campaign called "Start with Yourself" aimed at raising awareness about preventive measures to face the coronavirus pandemic.

More than a dozen Israeli and Palestinian nonprofit organizations active in various aspects of peacebuilding will launch a joint online fundraising campaign on Dec. 29, working with the belief that an already saturated yet neglected field will benefit from shared efforts across the board.

The rare initiative comes amid rising tensions between Israelis and Palestinians following a spate of recent stabbing and shooting attacks by Palestinians against Israeli civilians and violence by Israeli settlers against Palestinians in the West Bank. The Israeli army is currently on high alert after the killing of Yehuda Dimentman, 25, in a shooting on Thursday night.

It also comes after the May conflict between Israel and Hamas in Gaza, which saw violent clashes between Jews and Arabs in cities and towns across the country.

The campaign was initiated by Amal-Tikva, a Jerusalem-based organization that provides strategic consulting and training for nonprofits to improve effectiveness, together with B8 of Hope, which supports Israeli and Palestinian grassroots peace-building initiatives. It will unite some 13 Israeli and Palestinian NGOs for focused online fundraising and is being billed as an opportunity where “people from all over the world will join together to support organizations building a more peaceful reality for Israelis and Palestinians.”

Participating organizations – including Lissan, which promotes gender and social equality in Jerusalem through language education; MEET, an educational program for the most promising Israeli and Palestinian future leaders; and the Parents Circle Families Forum, a joint Israeli-Palestinian organization of over 600 bereaved families from both sides of the conflict — will use Causematch, an Israeli fundraising platform that eases the task for nonprofits, providing expert advice on how best to engage with potential givers and reach a wider audience.

While the main thrust of the campaign will run Dec. 29 through 30, many of the organizations are launching their sites tomorrow and working up to the main campaign day. One organization has already raised nearly $100,000.

“Even if the organizations do not raise as much as they hope to, they will learn how to engage their own communities more effectively and how to manage a project more professionally,” Meredith Rothbart, co-founder and CEO of Amal-Tikva told Jewish Insider. “One of our main goals is to move from a culture of fragmentation and competition to one where peacebuilding organizations turn to each other for support.”

“Crowdfunding has major potential for grassroots organizations, yet we have seen that most NGOs in the field lack the skills and resources to run a campaign,” Rothbart said, adding that Causematch was a “natural partner for us with their model that includes coaching and group support on the technical, strategic and creative elements of the campaign.”

Mehra Rimer, a co-founder and chair of B8 of Hope noted, “When it comes to the holy land, bad news is the news and funding peace-building initiatives is investing in peace and becoming shareholders of a better reality.”

She said the initiative “enables anyone out there to join the cause” of building peace between Israelis and Palestinians.

Rothbart added that deciding to participate in this initiative was not easy for some of the groups, particularly the Palestinian NGOs, because coexistence initiatives and normalizing ties with Israelis are frowned upon. But, she said, the effort “comes at a crucial moment when the U.S. government has taken its support one step further by passing the Middle East Partnership for Peace Act, which will disburse over $250 million over the next five years to peace initiatives.”