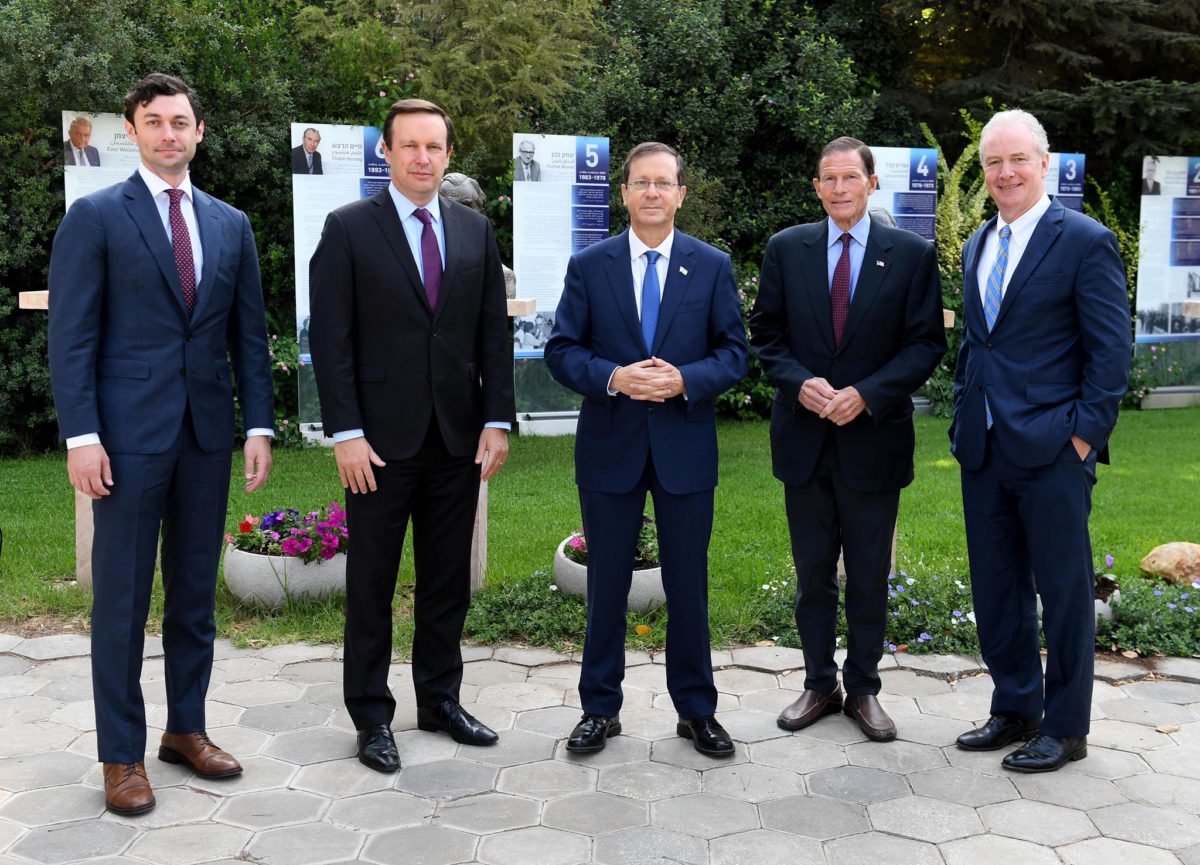 During their visit to Israel late last week, four Democratic senators pushed Israeli officials, including Prime Minister Naftali Bennett, to allow the United States to reopen the Jerusalem consulate that traditionally served the Palestinians prior to 2019.

Such a move is highly contentious in Israel, with some members of the government believing that reopening the consulate, which operated in Jerusalem for decades before it was closed by then-President Donald Trump, would infringe on Israeli sovereignty claims over Jerusalem.

“In our meetings today in Israel w[ith] Prime Minister Bennett and other officials we stressed the importance we place on reopening our consulate in Jerusalem to better serve Palestinians,” Sen. Chris Murphy (D-CT) wrote on Twitter last week. “This consulate was open for over 100 years before being cruelly shuttered by President Trump.”

Responding to Murphy’s post, Van Hollen said that “we had good meetings and raised this issue. It was also a commitment [President Joe Biden] made and important that he keep his word, follow through, and reverse Trump’s harmful decision.”

These and other post-meeting tweets from both sides led to speculation that the issue of reopening the U.S. Consulate in Jerusalem had created tension. In tweets about the meetings with Herzog and Lapid, Murphy described both exchanges as “candid,” an adjective he did not use to describe some of his other meetings on the trip, including those in Lebanon.

None of the four senators immediately responded to requests for additional information about the meetings in Israel.

Aaron David Miller, a senior fellow at the Carnegie Endowment for International Peace, took a different view, telling Jewish Insider on Wednesday evening that the statements did not seem especially “unusual.”

“This is what I call the ‘cosmic oy vey,’” Miller explained. “It’s the notion that any bump in the road or any obvious sort of disagreement between Israel and America is basically blown up into some major issue. I don’t think that’s what’s going on here… This was perfectly understandable.”

Miller noted that Van Hollen’s invocation of Biden’s name and “commitment” may indicate that high-level administration officials such as Secretary of State Tony Blinken and National Security Advisor Jake Sullivan may have consulted with the senators on the consulate issue before they met with Israeli officials.

“Senators are capable of weighing in on their own and independently, but it’s a curious framing of the issue that this is a commitment the president made, it’s important that he follow through on that commitment. I mean it sounds like a secretary of state speaking, not a U.S. senator,” Miller said.

Biden did raise the consulate issue during his meeting with Bennett in Washington last month, in what one White House official described to Jewish leaders as a frank discussion.

“If [the White House] were looking to show that there’s no daylight between Senate Democrats and the White House on this issue and they want to signal to the Israelis that they should know that, there would be no better way to do that,” Miller continued. Murphy, Van Hollen and Blumenthal “would be the perfect messengers of the Senate side to deliver something like this if in fact this was wired” with administration officials.

Miller noted that Biden and Bennett are united in wanting to ensure that Bennett’s government stays in power in order to prevent former Prime Minister Benjamin Netanyahu from returning to the premiership.

“That gives each of [Bennett and Biden] a very large stake in making sure that whatever divides them is managed very carefully,” Miller said. The senators “may basically have said, ‘we really do need to do something that doesn’t touch the substance but is an important corrective to the Trump years’… The other part of me thinks, why are [the senators] pushing this now if in fact it could create significant problems for the Bennett government.”

“I don’t see [the senators’ meetings] as presaging some huge soap opera-like vision that seemed to characterize much of the Obama-Netanyahu relationship,” he said, “but it is an indication that there are genuine issues that divide these two, however much the political necessity of keeping Netanyahu out of power binds them together.”

Miller added that the Biden administration may not, ultimately, push this issue through to the finish line, given the range of other higher-priority matters the administration is facing on the foreign and domestic fronts. Officials may ultimately choose to find another way to extend a hand to the Palestinians in order to maintain U.S. credibility if the issue does end up being potent enough to bring down the Bennett government.