‘What I come to in my mind is that it’s not all for naught,’ said Rep. Brain Mast (R-FL), who lost his legs to an IED in Kandahar 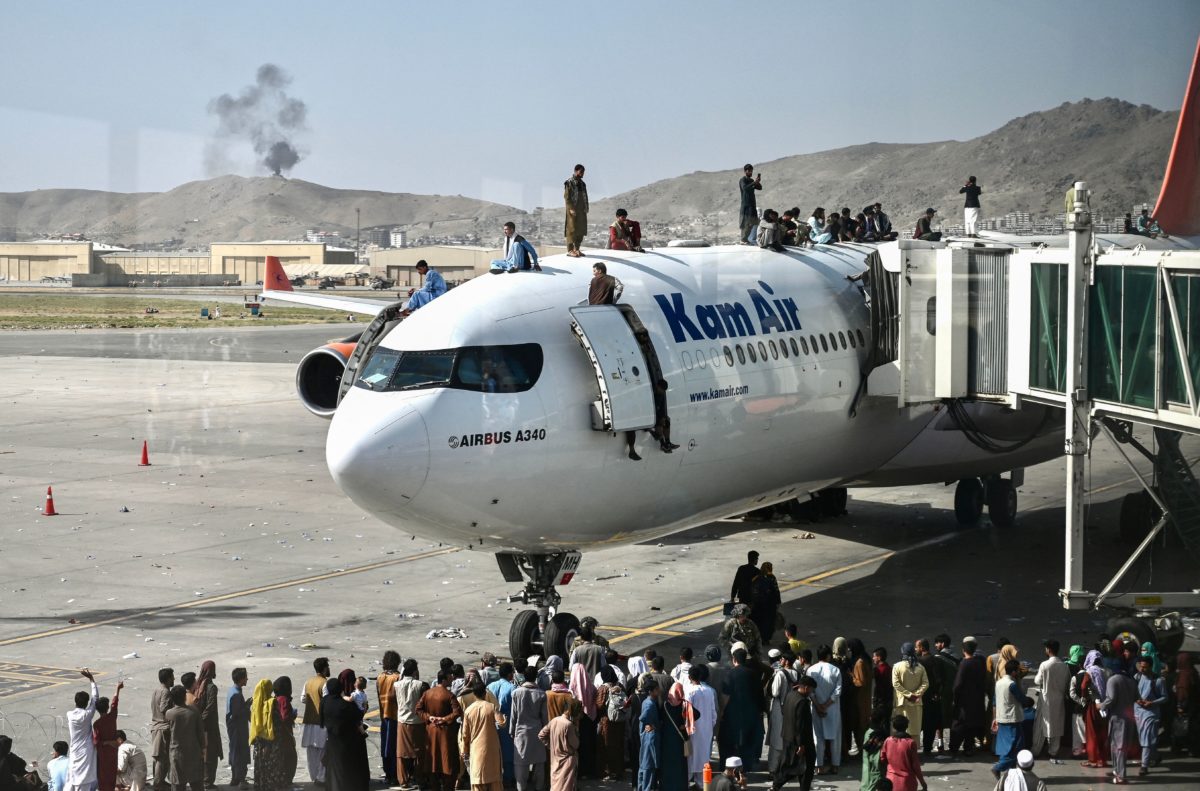 Although Congress is currently in recess, lawmakers have taken to the airwaves and social media in recent days to offer support, recriminations and other commentaries on the U.S.’s departure from Afghanistan after 20 years and the Taliban’s rapid conquest of the country. In interviews with Jewish Insider on Monday, four House of the 74 total House veterans — including two Afghanistan veterans — offered a range of views on President Joe Biden’s approach to the situation.

Rep. Brian Mast (R-FL) served as an explosive ordnance disposal technician in Afghanistan and lost both legs and a finger to an improvised explosive device in Kandahar in 2010. He said recent events in Afghanistan have left him, his family and other veterans wondering whether their hardships were “all for naught.”

“What I come to in my mind is that it’s not all for naught. We were all out there. We were fighting for things that we believed in just hitting back people that attacked our country on our mainland,” Mast told JI, referring to the 9/11 attacks. “What we do in combat, we definitely do for our country, but we do even more so for the people to our left and right. And that can never be taken away.”

Mast blamed the Taliban’s takeover on the U.S.’s rapid drawdown, saying it came without “a process by which we were going to exit and make sure that this area was maintained.”

Mast argued that the notion that Biden’s only options were to conduct a rapid drawdown or to drag on the war apace is “not a true argument,” and said that the U.S. should instead have conducted a slow, regional drawdown, taking time to “test the waters” before a full pullout. The Florida Republican said the Trump administration, which set the initial U.S. drawdown strategy and reached an agreement with the Taliban, bears “zero blame” for the current situation.

Rep. Jake Auchincloss (D-MA), who served as a platoon commander in Afghanistan’s Helmand province, takes a different view, blaming the Afghan government and military’s “lack of political will” for the catastrophic collapse.

“We built Afghanistan an air force, we built them an army, we helped them craft many of the tools of statehood. But ultimately, building a nation is a project that must be done by the nation itself,” Auchincloss told JI. “And in the course of 20 years, they did not do so. We can’t have Americans fighting a war that Afghans won’t fight for themselves,” he said, echoing a phrase repeated by administration officials.

He also directed blame for the country’s faster-than-predicted fall on the Afghan government — administration officials said repeatedly that a collapse would take months, not days — and away from U.S. intelligence officials.

“I don’t think people fully appreciate how corrosive the corruption within the Afghan government was and how demoralizing it is for frontline troops to know that [with] $80 billion of American support they can’t even get enough food to eat on the frontlines because senior commanders and bureaucrats are lining their own pockets instead,” Auchincloss explained. “Would you fight for people who did that?”

Auchincloss lambasted the U.S. national security establishment for dragging the conflict out for two decades by allowing the U.S. mission to shift from counterterrorism — a “tightly scoped and militarily appropriate” and “successful” mission — to a “counterinsurgency boondoggle with no endgame.”

Biden, Auchincloss argued, had the “integrity to tell the American people and to tell the Afghan government that counterinsurgency is unwinnable unless the Afghan people can craft an alternative to the Taliban”

Rep. Don Bacon (R-NE), who commanded an Air Force squadron in Iraq and retired from military service as a brigadier general, took a third view. Bacon argued the U.S. should have maintained an ongoing military presence in Afghanistan, and that poor government messaging from recent administrations on the U.S. mission’s current purpose fueled popular support for a full withdrawal.

“We could have sustained a residual force of non-combat forces, and a combat airpower and helped maintain their aircraft. We could have done this a long time,” Bacon said. “And 2,500 forces is a lot less than what we have in Korea, Germany and many places in the world. And let’s be clear, we suffered zero combat losses in almost a year and a half.”

Bacon claimed the Afghan forces collapsed in large part because they lost American air support and U.S. contractors who helped maintain the Afghan aircraft. With U.S. support, Bacon highlighted, Afghan forces were able to hold the majority of territory in the country.

The Nebraska congressman also emphasized that he did not support the deal that former President Donald Trump negotiated with the Taliban, but said that Biden could have rejected Trump’s plan as he has with many of the former president’s other policies.

Rep. Scott Perry (R-PA), a retired brigadier general in the Pennsylvania National Guard who served in Iraq in 2009 and 2010, disagreed with Bacon and Auchincloss.

“The United States was in control of the situation, and the United States is the one that did the choosing and the time and the place,” he said, dismissing hypothetical arguments that the Taliban would eventually have taken power no matter what the U.S. did. “They let this spiral out of control just by walking away… You can’t argue what is currently happening right now.”

“The reason it fell apart is because it was based on conditions. Our enemy doesn’t respect the truth and doesn’t want to abide by the terms of anything like that,” Perry said of the deal. “America needs to acknowledge and recognize that there are many places in the world that don’t ascribe to the things that are important to Americans and Western civilization, which is honoring your commitments and living up to your word. These are unfortunately your places where it Is lauded to be duplicitous.”

With the situation as it stands, Mast said, evacuating interpreters and other Afghan nationals who aided the U.S. in the country must be the nation’s top priority.

“That is a generational reputation that cannot be fixed if we leave people behind that helped us,” Mast said. “It’s one of the single biggest commitments that we make as soldiers to one another is that we don’t leave our people behind. That’s an American commitment. And it’s important.”

In his interview with JI, Mast reflected on the dedication of one Afghan interpreter who worked with his unit regularly, including on the night he was injured.

“He always had this helmet on that didn’t fit him right. It was like a kid putting on their dad’s suit… It was like a bobblehead on your dashboard,” Mast said, chuckling. “I can remember a mission he was on… and he had on a pair of tennis shoes. And we were going through some mud and he lost his tennis shoes. And he ended up completing this whole mission with us in bare feet.”

“These are people that you serve next to night after night, mission after mission,” he continued.

Mast said he’s lost track of this individual, who had two children, and doesn’t know if he is still in jeopardy.

Auchincloss said that the needt to evacuate local U.S. partners resonates particularly strongly through his Jewish heritage. “It’s an especially resonant point for the Jewish people who know so intimately the story of the refugee,” he explained.

He added that he will “be holding the administration to account to ensure that we do process and welcome refugees.”

National security experts largely agree that the Taliban’s return to power will likely make Afghanistan a safe harbor for terrorists.

Auchincloss acknowledged that the U.S. counterterrorism mission is in jeopardy, emphasizing concerns about Al Qaeda-linked prisoners freed from Bagram Airbase. He said the U.S. will need to maintain some form of counterterrorism ability to strike inside Afghanistan against individuals seeking to attack the U.S. homeland.

“The United States needs to maintain and credibly demonstrate its prerogative to eliminate a terrorist threat, wherever it exists,” Auchincloss said. “The Taliban must appreciate that we will strike if there is credible evidence of an impending threat against the United States.”

Mast said the U.S. should send a strong signal to the Taliban that its response to terrorism will be swift and overwhelming.

“If the administration wanted to be strong on this, they would let the Taliban know that if we have to return in any kind of force… it’s going to be the most heightened violence of action that they’ve ever seen in the last 21 years and make that red line,” Mast said. “If we’ve gotta go back there, we’re going to f you up.”

Bacon argued that it is essentially too late for the U.S. to hold off terrorist groups in Afghanistan.

“Humpty Dumpty has been broken. I don’t think we can put it back together again unless you want to redo an invasion of 2001,” he said.

Critics of the Biden administration’s strategy also argue that it will inevitably embolden U.S. adversaries like Iran and China.

“The region sees an American superpower that has lost credibility, its reputation, its word has now been undermined. And I think that hurts the region, it hurts our friends in Israel too,” Bacon said. “Iran is now gonna be emboldened to step up more when they see just what happened here. I don’t see any easy answers to fix what President Biden just broke in Afghanistan.”

Auchincloss disputed this, saying that “it would be the dishonorable option here for the United States to persist in a disingenuous campaign that can’t be won,” and that continuing the war in Afghanistan would “detract from our credibility in the region” more than pulling out.