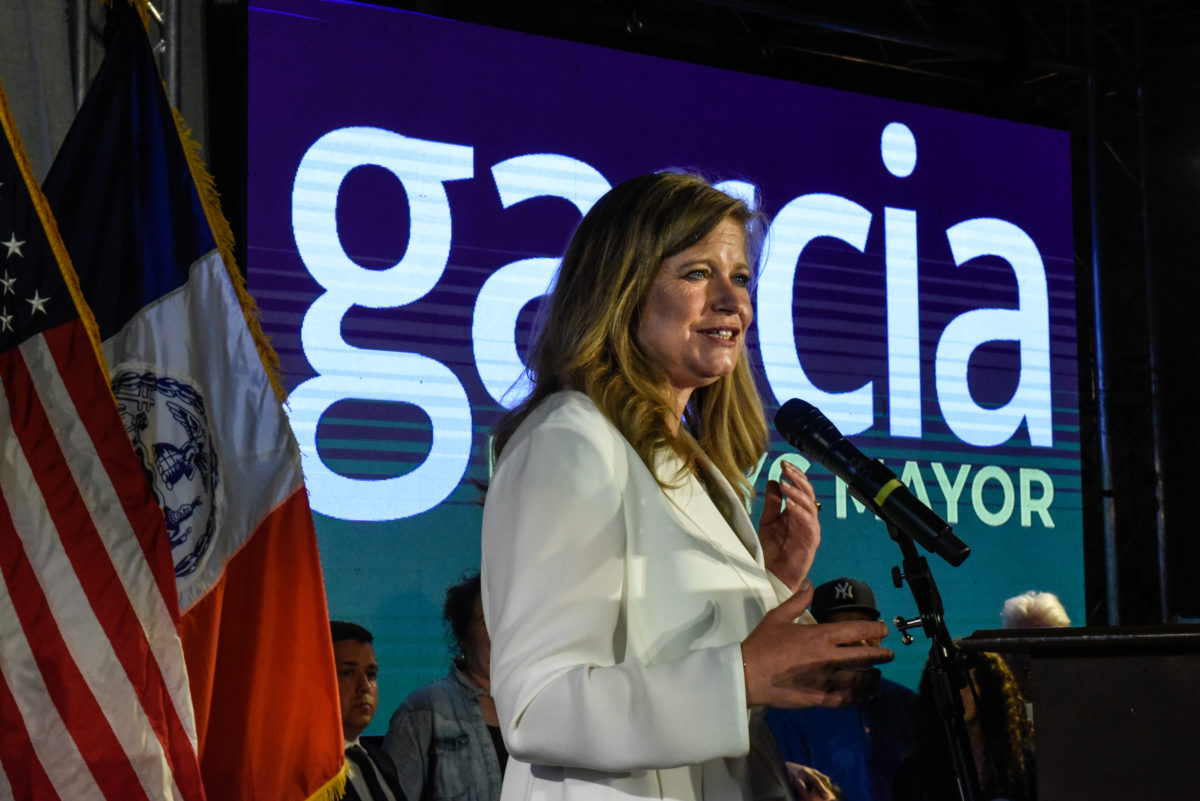 Kathryn Garcia, candidate for mayor of New York City, delivers remarks to supporters on June 22, 2021 in the Bushwick neighborhood in New York City.

The nondescript venue, on a dead-end street in post-industrial East Williamsburg, was in some ways a fitting location for the end of a grueling campaign that until not too long ago was widely dismissed as unviable.

On Tuesday night, Kathryn Garcia, whose late-stage surge in the final months of New York City’s contentious mayoral race represents one of the most remarkable turnarounds of any candidate in the crowded Democratic primary, gathered with supporters at her sister’s event space in Brooklyn after polls closed and early vote counts trickled in.

Eric Adams, the frontrunner and Brooklyn borough president, had already taken an early lead by the time Garcia took the stage at around 11 p.m. in a white jacket and gray T-shirt with “Feminist” written in gold lettering. Andrew Yang, the former presidential candidate who failed to sustain an initially promising campaign, was admitting defeat across the river at a watch party in his home neighborhood of Hell’s Kitchen.

But Garcia made clear she had no intention of conceding, despite being in third place while trailing Adams by about 10 points with 20% of the vote and the majority of precincts reporting in the first round of counting.

“This campaign has been about overcoming expectations,” Garcia, 51, told the modestly populated room, sounding a note of cautious optimism. “When I got into it, people said, ‘Well, I know you would be the best mayor, but I’m just not sure you can win.’ Or, ‘Women haven’t ever won the race for mayor.’”

Garcia, the former sanitation chief who did double duty as outgoing Mayor Bill de Blasio’s food czar during the pandemic, is a career civil servant who touts her extensive government experience and deep understanding of the city’s vast and often unwieldy bureaucracy. The first-time candidate, who would be New York City’s first female mayor, has pitched herself as a moderate and even-tempered crisis manager more interested in rolling up her sleeves and fixing intractable problems than engaging in partisan bickering.

In her campaign kickoff video, released in December, Garcia warned, using typically no-nonsense language, that the next mayor would inherit a “shitshow” as the city emerges from the ravages of the pandemic.

Still, while experts praised her competence and acknowledged her reputation as a workhorse, few believed she was capable of pulling off an upset in the primary — until a surprise New York Times endorsement in early May that brought renewed attention to her candidacy and imbued her campaign with an air of institutional credibility.

Suddenly, the mayoral hopeful shot to the front of the pack, with polls indicating that she was gaining momentum in the final stretch of the race.

Speaking to supporters last night, Garcia suggested that she was depending on that dynamic as the city implements its first ranked-choice election system, in which voters can choose up to five candidates by order of preference.

The new system would seem to benefit a candidate like Garcia, whom voters might be more inclined to pick as their second or third choice rather than their first. A recent ranking in Der Yid, the weekly newspaper of the majority Satmar sect in Williamsburg, suggests as much. In an article published on Friday, Garcia was listed as the third choice behind Yang and Adams — a notable bump for the former sanitation commissioner, who edged out Scott Stringer, the city comptroller. He had previously held the spot until his campaign was hobbled by allegations of sexual impropriety.

“This is going to be about not only the ones, but also about the twos and threes,” Garcia said on Tuesday evening. “To be quite honest with you, we’re not going to know a whole lot more tonight than we know now, and it is going to come down to opening up those ballots and making sure that every single New Yorker’s voice is heard.”

Annika Reno, Garcia’s deputy press secretary, was equally positive in a brief interview with Jewish Insider at the venue. “We’re feeling really good,” she said, noting that the campaign wasn’t yet reading too deeply into the numbers while adding her expectation that it could take weeks until a victor is declared as all the votes are tallied.

Garcia, who was not made available for an interview, appeared in East Williamsburg after a long day campaigning throughout the five boroughs, beginning at a Department of Sanitation garage in Manhattan. “That was really a sentimental moment,” said Reno. “A nice way to close out the campaign.”

At the event, an intimate, low-key affair, campaign volunteers wore green shirts emblazoned with the phrase “Garcia Gets it Done” as attendees munched on fried chicken, macaroni and cheese, tater tots and gourmet sandwiches from Court Street Grocers. The soundtrack included thematically appropriate numbers such as Curtis Mayfield’s “Move on Up,” Starship’s “We Built This City” and Prince’s “When Doves Cry,” whose lyrics Garcia wrote on the walls of her childhood bedroom in Park Slope.

David Freedlander and Ross Barkan, local political reporters who had both been denied entry to Adams’s event nearby at a Williamsburg dance club, could be seen lingering on the sidelines at Garcia’s shindig — their apparent number-two choice for watch parties.

Joe Lhota, the former chairman of the Metropolitan Transportation Authority who ran unsuccessfully as a Republican in the 2013 New York City mayoral race, was also in attendance. He told JI he has been supporting Garcia’s campaign “right from the very beginning,” adding: “The city right now is in need of good management.”

“I wish it was a little closer,” Lhota said of the early vote count, still maintaining a hopeful outlook. “Let’s see how the ranked choice works out. You know, certainly, this whole thing is new to all of us. So we’ll see. I’ve tried to go through so many different permutations. It’s mind-boggling.”

Garcia, for her part, seemed eager to put such considerations aside, at least for a couple of hours, after six months on the stump. “You know what?” she said from the stage. “I think we need to party like it’s 1999.”

She disappeared for a few minutes after concluding her speech as she changed into a more comfortable outfit, then re-emerged to mingle with supporters.