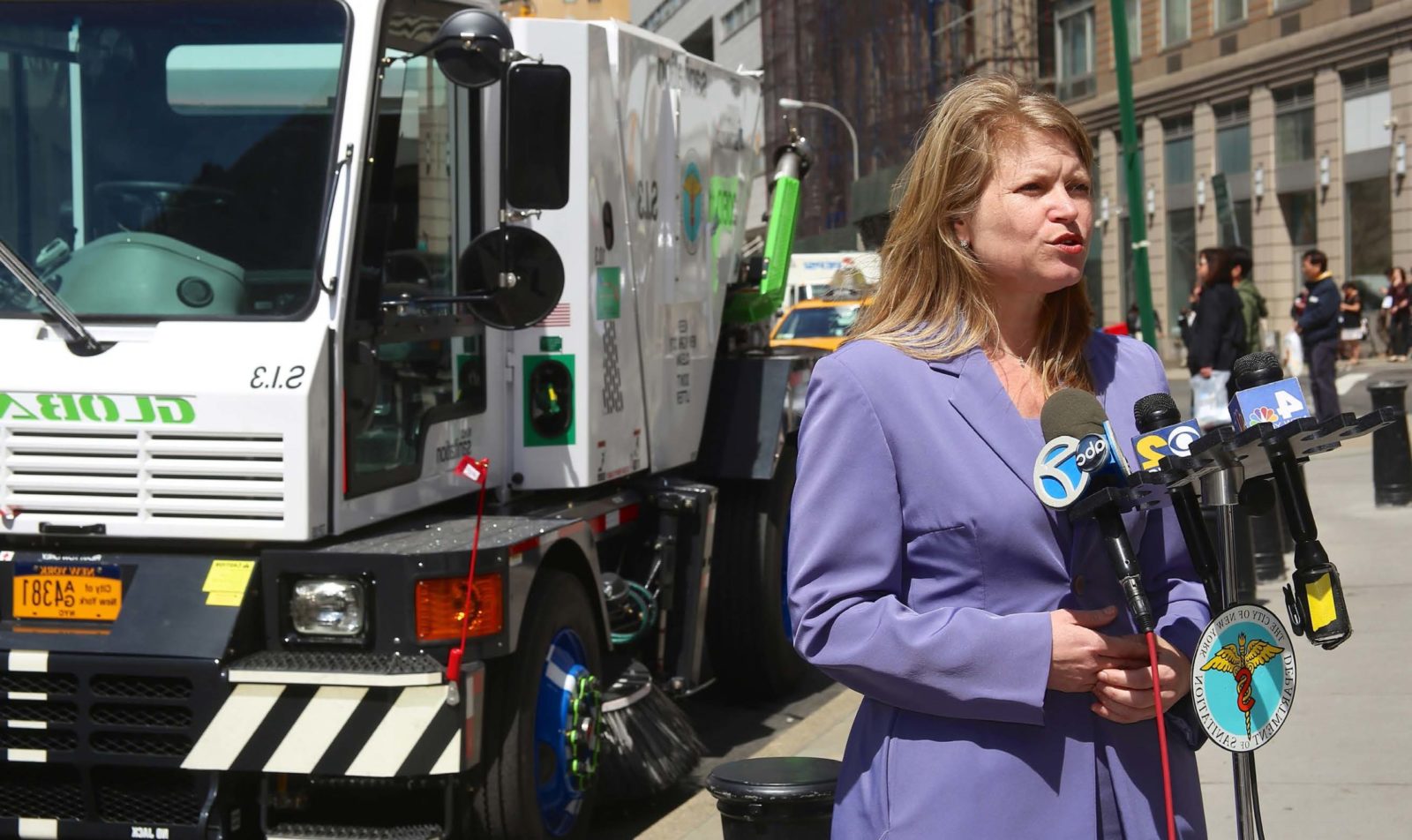 Garcia, who kicked off her campaign in December, was formerly the city's sanitation chief

Kathryn Garcia, who recently resigned from her position as New York City sanitation chief to run for mayor, was in a light-hearted mood on Wednesday morning. It was her 50th birthday, but rather than celebrating privately with her family, she was girding herself for a campaign event organized by her kids as a kind of gag gift. “We’re having a fundraiser tonight,” she said. “My children are going to roast me, which I’m a little concerned about. But everyone thinks this is a great idea. I was like, ‘I’m not sure.’”

The celebration was, to a certain extent, appropriate for a candidate who casts herself as a straight shooter. In a campaign kickoff video released in December, Garcia warned that the next mayor would inherit a “shitshow” as the city, already ravaged by the pandemic, stares down its worst economic crisis in decades. “I’m not a politician, but right now we don’t need politics,” Garcia said in an interview with Jewish Insider. “We really, really need experience, and someone who’s a problem-solver with a track record of getting things done.”

Though she has never run for public office, Garcia argues that her long tenure working for the city gives her a unique edge in a crowded field populated by career politicians as well as outsiders with no government experience. The Brooklyn native previously held high-level positions in the city’s housing and environmental protection departments. More recently, thanks to an appointment from Mayor Bill de Blasio, she oversaw an emergency meal distribution program while serving as sanitation commissioner.

“I don’t have to prove that I have the ability to run the city,” Garcia boasted. “We’re going to have to make really strategic decisions to ensure that we bring back our economy, and you can’t do that without being able to deliver really excellent core services, no matter what zip code you’re in,” she added. “I know how tough it is. I’ve been there. I know how tough government can be.”

Daniel Rosenthal, a Democratic assemblyman in Queens, substantiated her claim, describing Garcia as an attentive leader. “During the pandemic, [she] and her team were very helpful in accommodating the kosher food sites for the grab-and-go meals,” he told JI. “We also had a food pantry that was overextended, and I spoke with her and she was able to get more food to the pantry within days.”

“She understands what it means to run a city,” said Leon Goldenberg, a real estate executive in Brooklyn’s Midwood neighborhood who has spoken with Garcia about her candidacy. “She’s very impressive.”

But despite earning high marks for her competence as a city official, Garcia’s path to victory in the Democratic primary appears somewhat elusive at the moment. Recent polling on the race put her at just 2% among likely voters, trailing the leading candidates, including Andrew Yang, Scott Stringer and Eric Adams, by double digits. She has also lagged in fundraising while struggling to pick up major endorsements.

“I don’t see her as a top choice right now and doubt she’d be second or third choice of many voters,” said a Democratic consultant who is not working for any of the mayoral candidates. “She has the ability to run the city, but her lack of name recognition and relatively modest campaign war chest may be too much to overcome.”

“The state of politics is that, unfortunately, experience doesn’t factor in many times,” added Republican strategist Tom Doherty.

Eli Valentin, a political analyst in New York, speculated that Garcia may be situating herself for a position in the next administration — just not the top job. “She’s making a case to perhaps be a candidate for the deputy mayorship and even perhaps deputy mayor of operations, which is essentially the person who runs the city,” he said. “I think she’s proving that she knows how the wheels of the city government work.”

Still, it would be unwise to rule Garcia out just yet, according to Michael Hendrix, director of state and local policy at the Manhattan Institute. “I do think she occupies a unique role in the race,” he told JI. “Kathryn Garcia has what [television host] Mike Rowe would call a dirty job, and she’s come out clean.”

He singled out her housing plan for particular praise. “I think she recognizes that we are in a housing crisis that can’t be solved alone through subsidy,” Hendrix noted, “that the housing market has to work so that it can work for all.”

But even if substantive policy proposals don’t often win races, Hendrix ventured that Garcia could plausibly pull off an upset with more than three months remaining until the June primary for her to gain some momentum — and with the prospect of a new ranked-choice voting system that has never been tested in New York. “Does she occupy a place in the race such that being a consistent number two while the number ones split is a reasonable route to victory for her?” he mused. “I think it is.”

Garcia, for her part, is undeterred. The race remains in flux, she said, as voters search for a candidate with the right credentials. “As they get to know me, I become their choice because they have not settled in on anybody who has greater name recognition than I do.”

“I don’t need a five-borough tour of the city,” Garcia told JI, arguing that her past jobs put her in touch with voters’ needs on a granular level. “In all of my roles, you just learn about all these different communities and what services they need to really thrive.”

Garcia was in constant communication with the Orthodox Jewish community in her time as sanitation chief on issues like school bus transportation and garbage trucks. “When Passover happens, we know that they need more service,” she said.

Now that she is running for mayor, she is working to deepen those relationships. “They are concerned about having religious freedom, but also they want the economy to come back, they want to be able to be working again,” she said. “They want to know that the police are going to be partners with them and keeping them safe.”

Rather than enforcing standards from on high, Garcia said that she is interested in collaborating with Jewish community leaders on issues like yeshiva education. “The majority of our city’s parochial schools, including yeshivas, are providing a strong educational foundation for children whose parents do not want to be in a traditional public school environment,” Garcia said. “But it also means that we need to work closely with the yeshivas to ensure that we’re using every tool so that people have access to every resource and educational service possible.”

Garcia, who opposes the Boycott, Divestment and Sanctions movement, told JI that she would be eager to visit Israel if elected, as de Blasio did in 2015. “But we’ll see whether or not I get to leave the city of New York over the next few years,” she told JI. “I have to say, as sanitation commissioner I never left the city in snow season. Someone at City Hall once asked me, like, ‘Why are you going to the Caribbean in May?’ And I was like, I can’t go in the winter. It might snow and you have to be here.”

Despite her connection with de Blasio, Garcia was also critical of her old boss, whose popularity has lagged. “I think there will be some things that he is applauded for, particularly pre-K, but others where the execution was just poor, and that there are some missed opportunities,” she said, referring to the city’s shaky initial vaccine rollout, among other issues. “When things got really tough, and there were going to be hard decisions to make, the ability to execute was not there.”

Garcia’s campaign pitch may not be all that glitzy, but she believes voters simply want a return to normalcy. “This mayoralty,” she said, “will not be about parades and balloons.”