After two years of sporadic border closures, those facilitating short-term groups trips to Israel fear a generation of young Diaspora Jews might have been lost. 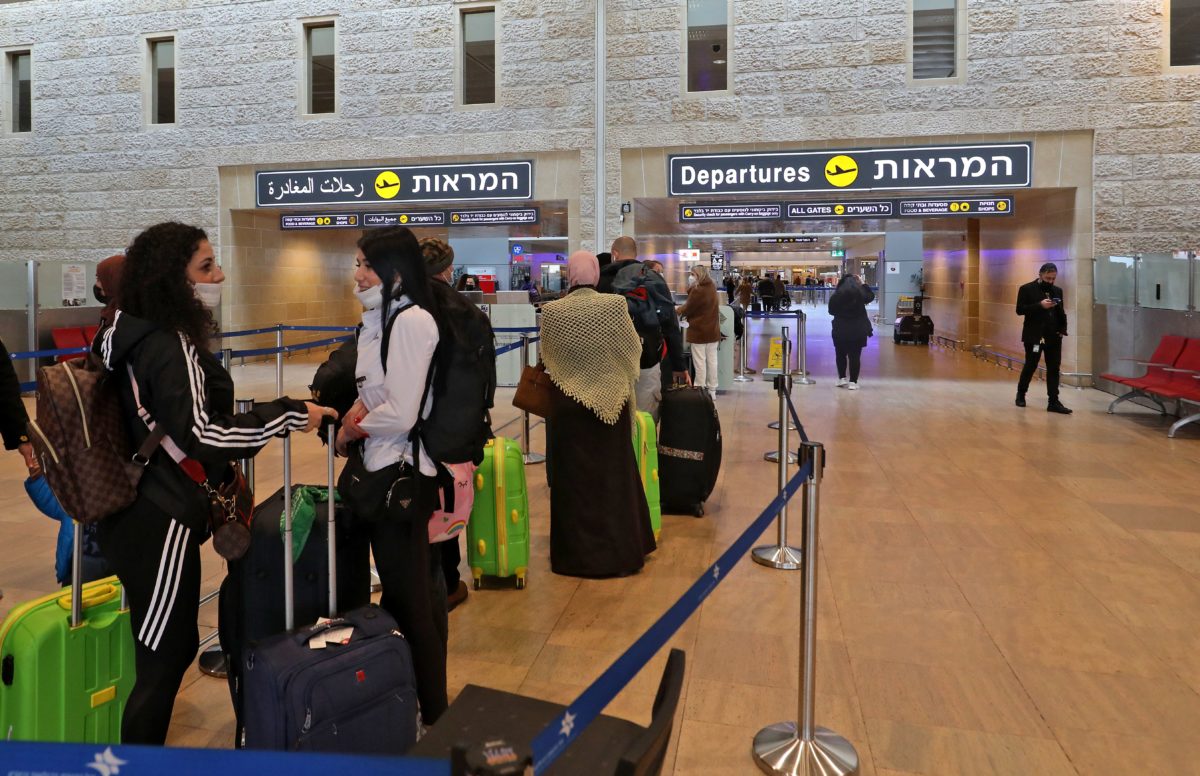 Travelers queue with their luggage at the check-in counter ahead of their departing flights at Israel's Ben Gurion Airport on December 21, 2021.

For many Jews in the Diaspora, a teenage group trip to Israel is a rite of passage. Like a brit milah or a bar mitzvah, it is part of the life cycle of events for many young Jews and since the founding of the state, Jewish schools, youth movements and synagogues around the world have promoted short-term trips as a way to strengthen Jewish identity.

Now, after two years of sporadic border closures aimed at stemming the spread of the coronavirus, those short-term trips have been more or less halted, prompting fears among those facilitating the groups that a generation of young Diaspora Jews will lose the opportunity to engage with Israel at a formative age.

“We call them the lost tribes of 2020 and 2021,” joked Amos Hermon, CEO of Israel Experience, one of the leading companies for educational group travel to Israel, in an interview with Jewish Insider.

Turning serious, Hermon said he believed that “the damage caused by the pandemic is irreversible.”

“These programs are an important part of the life cycle of Jews in the Diaspora, and they are essential for organizations and schools, as well as to parents and the wider community before a young Jew goes out into the world,” he continued. “For many of the young people, it is their first and last chance to come to Israel as a group or with their class before they get to campuses and face anti-Israel, BDS, antisemitic activities.”

Hermon, who before the pandemic was bringing some 30,000-35,000 young Jews from all over the world to Israel through Israel Experience, a subsidiary of the Jewish Agency, told JI, “I can feel the disappointment of parents on the West Coast, the East Coast or in London because of the corona[virus] limitations and the shutdown of [Ben Gurion] airport. All I can do is sympathize with them.”

While he said it’s too early to assess the implications of the pandemic closures, Hermon is worried that even if the trips restart – Israel reopened its borders to individual foreign nationals, not groups, this week – the requisite infrastructure will have collapsed along with the country’s entire foreign tourism sector.

“Some of our competitors are very good companies, but now they are facing bankruptcy and we are all really worried that when the skies do open again there will be no infrastructure left,” he lamented. “Incoming tourism in Israel is now in very bad condition, more and more tour guides – the best people in the industry who love talking about the history of this land, the archeology, the conflict, society — have lost their livings.”

Others are looking for solutions to address the problem. Last week, Birthright Israel, which runs 10-day programs for college-age students and young adults, announced the completion of a merger with Onward Israel, the leading provider of mid-length Israel programs. Gidi Mark, International CEO of Birthright, said the move was in response to the challenges posed by the pandemic and that it would “ensure that more young people have the opportunity to experience and develop a deeper relationship with Israel and its people.”

Hermon told JI that those involved in arranging educational trips have already approached the government, emphasizing the need for a viable plan that will enable all group tourism to continue even if (and when) another COVID-19 wave hits.

He emphasized that the reopening of the border this week is for individual tourists and not for groups. “We are now studying the new guidelines of the Ministry of Health and preparing for a situation where the rate of infection in Israel is among the highest in the world,” Hermon added. “I assume that within a few days the procedures will be clarified.”

Incoming tour operators such as Hermon are not alone in their concerns. Israel’s Minister of Diaspora Affairs Nachman Shai has also expressed alarm over the damage Israel’s border closures have had on the relationship with Diaspora Jews.

“We have to be much more flexible than we have been so far,” he told The Jerusalem Post on Friday, adding that when future coronavirus variants hit, “we have to be prepared with a different policy toward those people, Jews and non-Jews, who have strong contacts in Israel, relationship with Israelis, for whom sometimes Israel is the center of their lives, and who even have businesses here.”

Before Israel changed its border policy this weekend, a growing number of Jewish organizations had begun petitioning the government to allow educational and other groups to enter in some capacity.

Former Knesset member Michal Kotler-Wunch, who has been involved in pushing the government to adopt a tangible plan to allow foreign nationals, particularly those with close relatives in Israel, to enter the country during future waves of the virus, suggested in an op-ed on Friday that the government needs to “shift gears and create a new paradigm.”

“The mechanism utilized at the start of the pandemic to address outbreaks and most recently in this fifth Omicron wave must change,” she wrote. “Though it appears skies will once again gradually open, resolving immediate needs, significant systemic issues remain and are exacerbated, as time and corona fatigue factor in.”