10 new books to read in September

The books on JI’s shelf next month 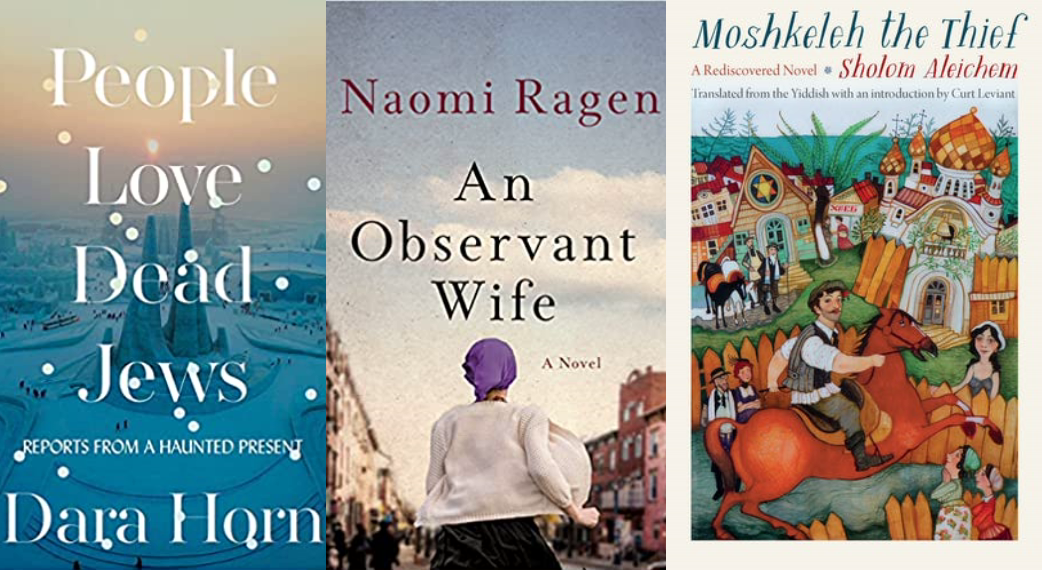 As part of a new series exploring new and upcoming books, the team at Jewish Insider is previewing upcoming books we look forward to reading. These are some of the top titles coming out in September:

Moshkeleh the Thief, by Sholom Aleichem (Sept. 1): This short novel by Yiddish author Sholom Aleichem first ran in a Warsaw Yiddish newspaper more than a century ago, but was lost to time and omitted from the larger collection of his works. The rediscovered Moshkeleh the Thief taps into new themes for the author: Jews in the Pale of Settlement interacting with their non-Jewish neighbors, as the eponymous Moshkeleh seeks to convince the daughter of a local tavern owner, who has fallen in love with a non-Jewish tavern patron, to return home to her family.

Beautiful Country, by Qian Julie Wang (Sept. 7): This memoir by Qian Julie Wang, the leader of the Jews of Color group at New York’s Central Synagogue, reflects on a childhood spent as an outsider in a foreign country after her parents move the family to New York City from China.

People Love Dead Jews, by Dara Horn (Sept. 7): In this series of essays that comprises Horn’s sixth book, she pulls from both research and her own experiences — from the ubiquity of Anne Frank’s story to swastikas that appear at her children’s school — to explore the modern-day rise in antisemitism.

Whistle: A New Gotham City Hero, by E. Lockhart and Manuel Preitano (Sept. 7): Teenager Willow Zimmerman is the hero of this young adult graphic novel, the first Jewish protagonist in the DC Comics world in more than four decades. While working for a corrupt “uncle” in Gotham to pay for her mother’s medical treatments, Willow and a local stray dog, Lebowitz, collide with a DC villian outside a local synagogue, an encounter that leaves both girl and dog with the ability to communicate with each other. Willow is forced to choose: Keep quiet about the corruption so she can support her mother, or take a stand against the evil in the community.

A Play for the End of the World: A Novel by Jai Chakrabarti (Sept. 7): In 1970s New York, Jaryk Smith, who as a young boy survived the Warsaw Ghetto, learns of the death of his childhood friend Misha, who was killed while staging a play in a rural Indian village. Jaryk travels to India against the wishes of his love interest, Lucy, to retrieve Misha’s ashes and take his place in the play. Chakrabarti’s debut novel explores the concept of survivors’ guilt as Jaryk contemplates what kind of future he wishes to have and searches for meaning in his own life.

An Observant Wife: A Novel, by Naomi Regan (Sept. 14): Regan’s sequel to her 2019 “An Unorthodox Match” finds protagonists Leah and Yaakov settling into married life in Boro Park and new challenges. Both Yaakov and Leah struggle to adapt to their new realities: Yaakov begins a new job as an accountant in Manhattan, and Leah, who was raised in the secular world, works to gain acceptance in the religious community in which she has chosen to live, all the while parenting the widowed Yaakov’s five children from his first marriage, including the teenage Shaindele, who has secrets of her own.

The Dressmakers of Auschwitz: The True Story of the Women Who Sewed to Survive, by Lucy Adlington (Sept. 14): At the height of the Nazi conquest through Europe, Hedwig Höss, whose husband, Rudolf, was the commandant at the notorious concentration camp in Poland, assembled a group of 25 prisoners, who worked in a salon at the camp designing and constructing beautiful clothing for the wives of Nazi officers. Adlington’s research, coupled with an interview with the last surviving dressmaker, provide an intimate look at the lives of the women — and the Höss family — before, during and after the Holocaust.

At Night’s End, by Nir Baram (Sept. 14): Originally published in Hebrew in 2018, Baram’s novel begins in Mexico City, where Yonatan, a writer, wakes up in a hotel room long after a book festival he was attending in the city had ended. Complicating matters is his best friend, Yoel, whom Yonatan had told festival-goers had died — except Yoel is still alive, and Yonatan struggles with the foreboding sense that his friend will soon die. The novel is Baram’s most personal, and the relationships portrayed are reflective of those of his childhood.

Wildland: The Making of America’s Fury by Evan Osnos (Sept. 14): After a decade abroad, Osnos, a staff writer for The New Yorker and a former bureau chief in Beijing for the Chicago Tribune, returns to America to get a better understanding of the ways in which the American mindset has shifted in the post-Sept. 11 era. Osnos revisits Greenwich, Conn., Chicago and Harrison County, W. Va. — three places he’s called home — to tap into the American psyche.

Peril, by Bob Woodward and Robert Costa (Sept. 21): For veteran journalist Bob Woodward’s third book on the Trump administration, he teams up with Washington Post reporter Robert Costa for a comprehensive look at the final days of the Trump administration, the January 6 insurrection and the days following President Joe Biden’s inauguration. Woodward and Costa conducted interviews with more than 200 individuals, compiling upwards of 6,000 pages of transcripts that attempt to explain one of the most tumultuous presidential transition periods in history.