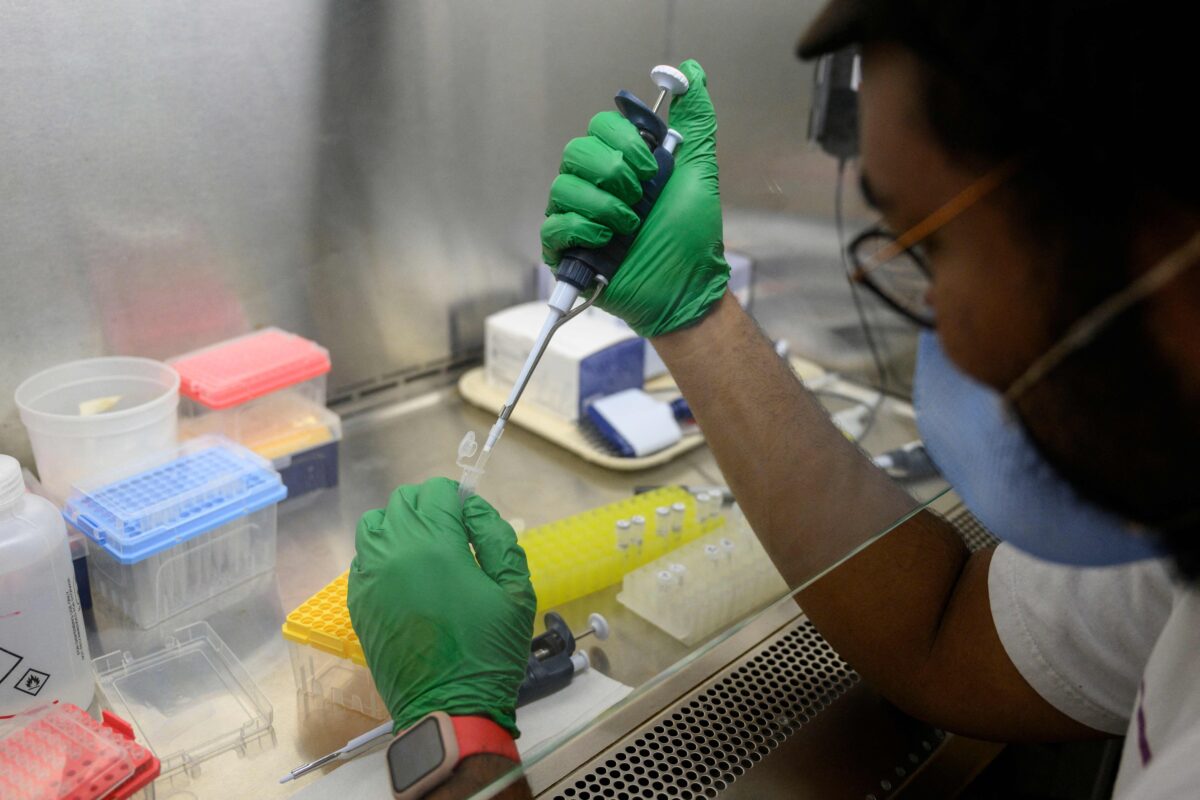 A research assistant prepares a PCR reaction for polio at a lab at Queens College on August 25, 2022, in New York City.

Imagine you’re an epidemiologist, tasked with convincing a dubious public about the spread of a dangerous disease that could have devastating consequences for those who contract it — but so far, only one person has gotten seriously ill from it. In the meantime, it circulates undetected, a silent stalker. People forget about the disease. They move on to issues that feel like more immediate concerns in their lives.

That’s the challenge public health experts and educators face in New York’s Rockland County, where a young man contracted polio over the summer, leaving him paralyzed. It was the first paralytic polio case in the United States in nearly a decade. Before polio vaccines were developed in the 1950s, the disease paralyzed roughly 16,000 people a year in the U.S.

“We’re asking people, please, pull a fire alarm in a large building, which will cause a humongous response. But do so because they tell you there’s a fire, but you don’t smell smoke, you don’t see flames and no one is saying fire,” said Shoshana Bernstein, a writer and health educator who lives in Monsey, a heavily Jewish city in Rockland County. “That’s what polio is. There’s no sign of polio anywhere.”

She means there’s no visible sign of polio, but epidemiologists have been tracking wastewater in the area for months, finding indications that the virus is still circulating in the area. (Traces of poliovirus come out in people’s fecal matter.)

“We can detect it in the sewage, and indeed, in five counties across many, many months, we’ve been continually detecting poliovirus up until right this month,” said Eli Rosenberg, deputy director for science in the office of public health at the New York State Department of Health. “We have ongoing evidence of circulation in the community, and that means it’s essentially a matter of time until we see more paralytic cases.”

The patient was identified in local media reports as an unvaccinated Jewish man in his 20s, touching off a massive vaccination campaign in the area, where vaccination rates are far lower than state and national averages.

But at a time when distrust of public health officials is high, and people are tired of living through other public health emergencies, reaching a skeptical public is difficult. Public health officials are instead taking a bottom-up approach that engages local leaders and doctors, and intends to avoid stereotyping the Orthodox community, which is in part a corrective to how the public health apparatus handled recent measles outbreaks and the COVID-19 pandemic.

“Vaccine hesitancy is not a Jewish thing. It is a national issue,” said Bernstein. Vaccine skepticism has increased across the board since the COVID-19 pandemic.

“We’re trying to take, I think, a little more of a softer approach, but still benefiting from all the lessons learned,” Rosenberg acknowledged. He pointed out that when New York ended religious exemptions for vaccines in 2019, it did lead to an increase in vaccination rates. But it had negative consequences, too. “That was effective, but it has also sowed some distrust, or some resentment. No one likes being told what to do,” added Rosenberg.

Bernstein, who has worked with public health authorities since the 2015 measles outbreak, agrees that the approach has changed. “There’s definitely a focus on getting health education into the community in a culturally sensitive manner,” she said. “There’s definitely an understanding of the need to shift to the community level, because from the top down is not working. We need to connect with people across every spectrum and across the entire nation at a level that resonates with each community.”

The New York State Department of Health estimates that between 5,000 and 10,000 people have been infected with the poliovirus, which is believed to have been acquired locally. (A similar strain of the virus was found in wastewater in Jerusalem and London, leading authorities to suggest someone may have brought it back into the U.S.)

Some countries, including Israel, use a version of the polio vaccine that exposes recipients to the live virus, which on rare occasions can allow it to spread. Vaccinated people can still contribute to the spread of polio, although they will not get sick from it.

“If they have been vaccinated, they wouldn’t be paralyzed, but they could potentially be participating in transmission,” said Kimberly Thompson, a polio expert who founded a nonprofit called Kid Risk, which researches global transmission of the virus. “We look at a place like Rockland County, the Hasidic Jews there, and Haredim in general, the low vaccine coverage puts them at risk. And because there’s intense transmission potential in the population, anybody who’s unvaccinated up to any age is at risk.” People can receive the vaccine regardless of age, even if they missed it when they were a child.

The most urgent need when it comes to stopping the spread of polio is increasing vaccination rates. The state ran vaccination clinics throughout the summer in conjunction with local authorities and religious leaders, as well as health centers. “We’re not coming in visibly, loudly, you know, showing up with a truck that says CDC, or New York State on the side, but sort of taking a little more of a nuanced approach,” said Rosenberg.

According to state data, 60% of Rockland County residents have received the three doses of the polio vaccine by age 2, the recommended vaccination timeline. The statewide average is 79%, and the national average is 92%.

New York State’s response to the virus has focused on the Jewish community because that’s where the virus appears to be spreading, Rosenberg said — and not because of any animus toward those Orthodox communities where vaccination rates are lower.

“There are other groups for sure that are lagging behind,” said Rosenberg, noting that some immigrant communities have relatively low vaccination rates, too. “Our biggest concern is still in these Jewish communities, particularly because that’s where our data are pointing [to] the lowest coverages. We have these sort of zip code breakdowns, so we know where those areas of lowest coverage are.”

But a vaccination drive, even if effective, is not the only answer. There might be a fire right now, but the public health response to polio requires an understanding that vaccine education is an ongoing, never-ending priority.

“There’s no one single action or publication or outreach that’s going to seal the deal. It’s going to have to be an emergency response when there’s an emergency and a constant state of education. Constant. We can’t ever drop the ball on educating about vaccines,” said Bernstein, who is at the forefront of that work.

She worked with local, state and national public health authorities to create a booklet called “Tzim Gezint”, Yiddish for “to your health” (a phrase commonly used after a person sneezes). It offers a comprehensive, easy-to-digest overview of vaccines and why Orthodox families should vaccinate their children.

“​​It starts off with the Torah perspective from a rabbinical source that would resonate with the Satmar sect, which is the type of Hasidic people that live in Kiryas Joel,” said Bernstein. (The booklet was designed specifically for the Hasidic community in Orange County, 25 miles north of Monsey.) “It wasn’t focused on one vaccine. It was focused on the history, really educating the community on what a vaccine is. Why do we have it? Why is it good? How are they made?”

While it is adults who make decisions for their children, it is the children’s health that is at risk if they go unvaccinated. An animated video Bernstein produced, called “Dovi and Rochel Stay Healthy,” shows two young Orthodox children learning about how vaccines keep us healthy.

“Thank you Hashem, for giving us vaccines,” a young boy in tzitzit sings while riding around on a scooter.

Over the summer, more than a dozen Rockland County rabbis published an open letter urging people to get vaccinated. But local public health educators are also investing in making sure pediatricians and primary care physicians are also well-suited to prepare the benefits of vaccination to their patients.

“What we’ve heard from community members, from a lot of leadership, is actually that people want to hear from their doctors, and they actually will listen to what their pediatrician has to say around vaccination oftentimes more closely than what faith leaders and rabbis might have to say,” said Rosenberg.

The way to message it: “The health care professional that you trust to cure you when you’re sick,” said Bernstein, “should also be the person you trust to keep you healthy.”

Rosenberg said the state has seen a “modest bump” in vaccinations since opening the clinics this summer, although not the level they had hoped for. In the period from July 21 to October 31, 21% more polio vaccine doses were administered to children 18 years and younger in Rockland, Orange, Sullivan and Nassau Counties than in the year before, according to data submitted to the New York State Immunization Information System.

“As a Jewish epidemiologist helping to lead response efforts,” said Rosenberg, “we want to get ahead of this, to make sure that the Jewish community is a model of good health and protecting ourselves and our neighbors, and that those are things that are part of Jewish values.”