‘Every foreign aid dollar spent must be in the interests of the American taxpayer, and American security,’ Jim Lamon told JI. ‘Anything that does not meet that standard should be eliminated, but Israel would likely be the last on the cut list.’ 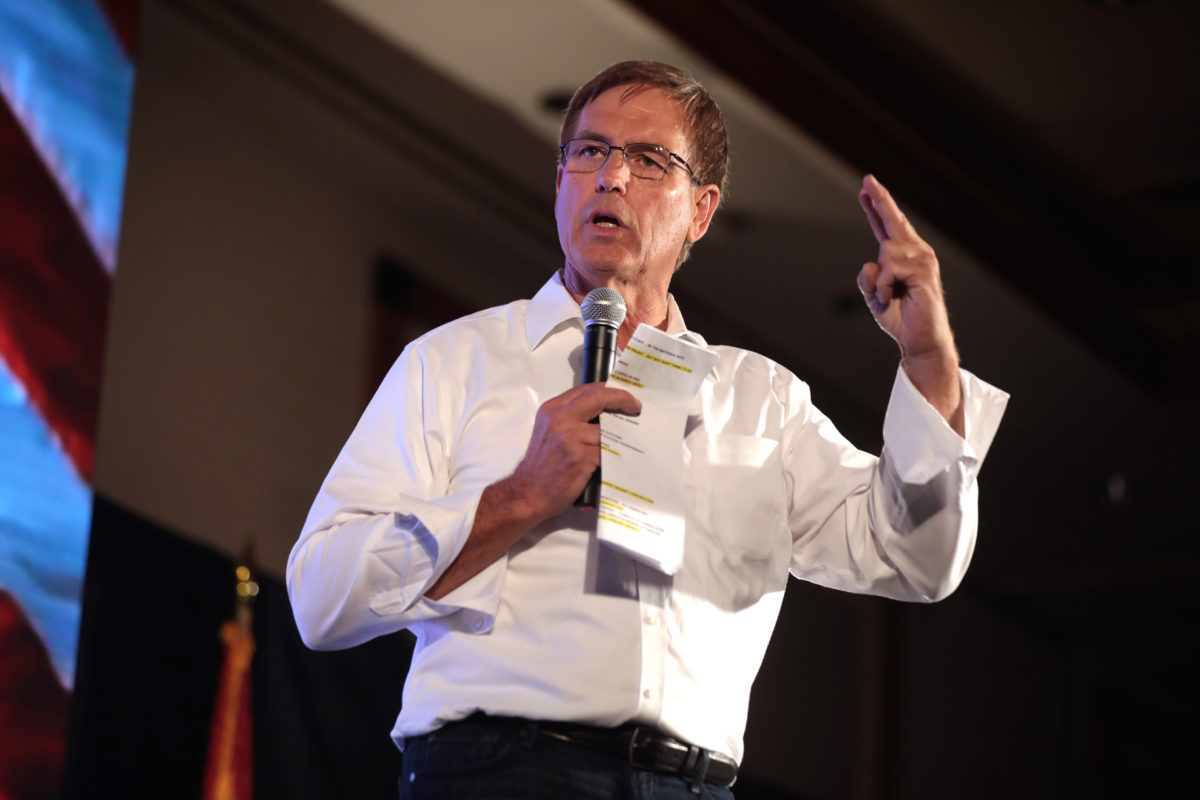 Jim Lamon speaking with supporters at a "Stand for Freedom" rally at the Embassy Suites by Hilton Scottsdale Resort in Scottsdale, Arizona.

Like most candidates in Arizona’s Republican Senate primary, Jim Lamon has emphasized his commitment to a number of standard-issue conservative policy objectives, including border security, “election integrity” and countering China.

When it comes to Middle East foreign policy matters, the solar executive and Army veteran also generally aligns with his main GOP rivals in the Aug. 2 primary, chief among them Mark Brnovich, Arizona’s term-limited attorney general, and Blake Masters, the venture capitalist and Peter Thiel protégé.

But in a notable contrast, Lamon suggested to Jewish Insider in a candidate questionnaire that he had not ruled out the possibility of cutting U.S. assistance to Israel, while expressing skepticism over international aid more broadly.

“Every foreign aid dollar spent must be in the interests of the American taxpayer, and American security,” he told JI. “Anything that does not meet that standard should be eliminated, but Israel would likely be the last on the cut list.”

Lamon did not elaborate on any instances that would necessitate reducing aid to Israel in his questionnaire, and his campaign did not make him available for an interview with JI.

Lamon, who described Israel as “the most trusted ally in the region,” said he is in favor of U.S. funding for Israel that is guaranteed in a 10-year memorandum of understanding between the two countries, as well as supplemental funding for Israel’s Iron Dome missile-defense system.

“Promises made in the form of the ten-year MOU between Israel and the United States must be kept,” he said. “Israel is an important, live-fire proving ground of the Iron Dome and other technologies that are important for Israel and for US defense.”

While Lamon’s approach to foreign aid is hardly unusual among GOP candidates, most have typically carved out a clear and incontrovertible exception for Israel, support for which is near-unanimous within the Republican Party.

Such issues have become sensitive in Arizona’s Republican Senate primary, where Masters in particular has drawn scrutiny from Jewish leaders who have questioned whether he will support the continuation of U.S. security assistance to Israel.

The 35-year-old Senate hopeful describes himself as a non-interventionist who is highly skeptical of providing international aid to most countries. But he has insisted that he is in favor of continued security funding for Israel, emphasizing that the U.S. and Israel have a “special relationship.”

More recently, Masters has taken heat for an essay he wrote as a 19-year-old undergraduate student — recently unearthed by JI — in which he referenced a “poignant quotation” from Nazi leader Hermann Goering while arguing that “the U.S. hasn’t been involved in a just war in over 140 years.”

Brnovich, for his part, has cast himself as a staunch supporter of Israel.

The two other Republican candidates in the race include Michael McGuire, a former adjutant general of the Arizona National Guard, and Justin Olson, a state utility regulator who recently served as the chief financial officer of the Trump-aligned campus advocacy group Turning Point USA.

Each of the five candidates spoke early last month at a forum hosted by the Republican Jewish Coalition in Scottsdale, remarks from which were not made public.

The RJC is not backing any candidate in the primary, according to Matt Brooks, the group’s executive director.

Like his opponents, Lamon, who is in his mid-60s, has made overtures to former President Donald Trump, who has yet to make an endorsement.

Lamont was the first Republican candidate to enter the race to unseat incumbent Sen. Mark Kelly (D-AZ), a former astronaut who has raised nearly $40 million since the beginning of 2021.

For his part, Lamon has loaned his campaign at least $13 million, some of which he has used to cut a series of controversial ads that have drawn national attention. In one notable spot, Lamon is depicted in a Western-style shootout with House Speaker Nancy Pelosi (D-CA), President Joe Biden and Kelly, whose wife, former Rep. Gabby Giffords (D-AZ), is a survivor of gun violence.

Raised on a farm in Alabama, Lamon, who is now a resident of Paradise Valley, served for six years as an engineer airborne officer in the U.S. Army during the Cold War, and was stationed in Germany.

He founded the solar company firm DEPCOM Power in 2013. The firm, where Lamon had until recently served as chairman and CEO, was acquired by Koch Industries in December. Lamon launched his campaign last May.

Elsewhere in the questionnaire, which touched on a range of Middle East policy issues, Lamon expressed opposition to reentering a nuclear agreement with Iran, stating that the Islamic republic “cannot be trusted to abide by the rules of a nuclear energy deal.”

“The Abraham Accords provide a useful template for peace between Israel and Arab neighbors in the region,” he added, referring to the series of agreements that normalized relations between Israel and a number of Muslim-majority nations in the Middle East. “But it is clear that Iran has no interest in peace in the Middle East, and is a state sponsor of terrorism. Israel should be allowed to keep Iran in check.”

Lamon did not further elaborate on his final point.

The renewable energy executive also opposed the Boycott, Divestment and Sanctions movement targeting Israel, arguing that far-left supporters of BDS are furthering what he characterized as an antisemitic agenda.

But Lamon shied away from criticizing members of his own party who have been accused of espousing antisemitic tropes, including GOP lawmakers in Arizona.

“I am a strong supporter of Israel,” Lamon averred, “and its sovereign right to defend its borders and secure the country for its citizens.”