Auchincloss: Any Iran deal should be sent to Senate as a ‘treaty’ 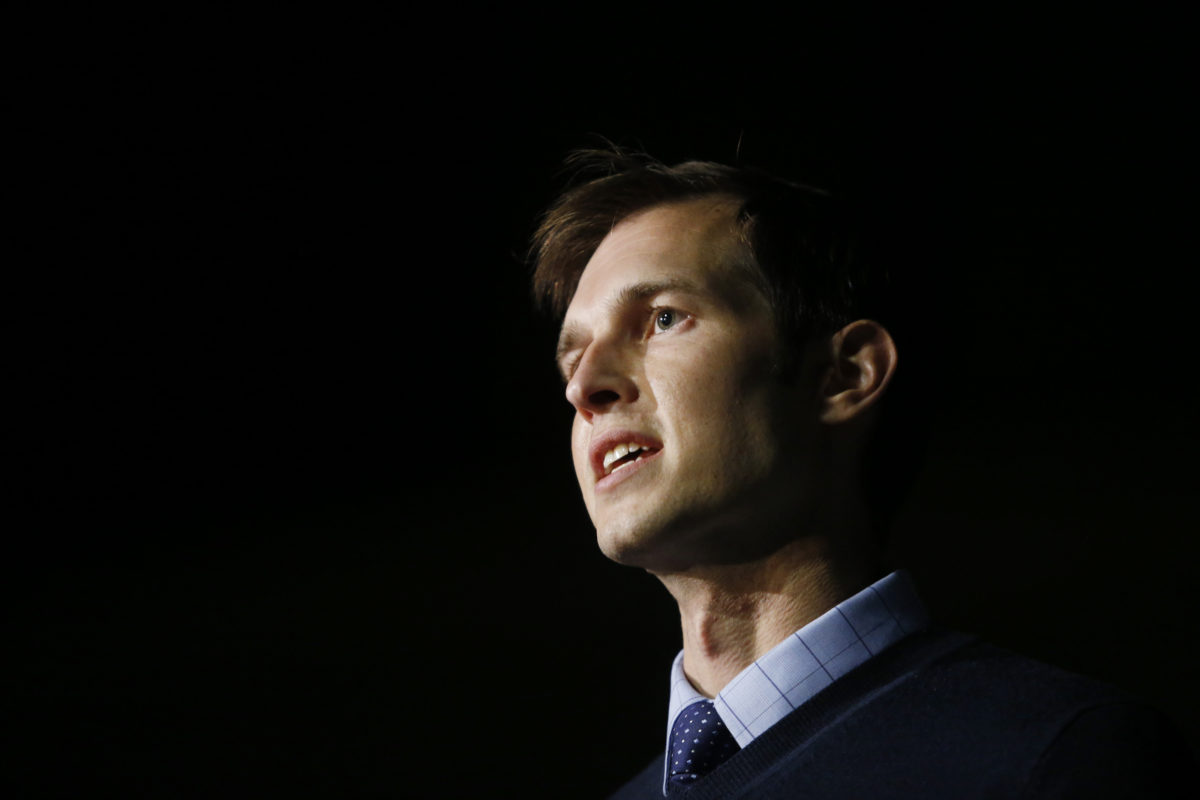 Rep. Jake Auchincloss (D-MA) called for any nuclear deal with Iran to be submitted to the Senate as a treaty, during an interview on Jewish Insider’s “Limited Liability Podcast” with co-host Rich Goldberg. “I may be old-fashioned, but I would expect the White House to get the approval of the Senate for a treaty, which is what it says in the Constitution,” the freshman representative from Massachusetts said. “And I know we did this work around where it became a majority vote in Congress in both houses for the JCPOA [Joint Comprehensive Plan of Action]. But, I mean, it’s in the Constitution, you sign a treaty, you get the approval of the Senate.” On the podcast, Auchincloss, who represents Massachusetts’s 4th Congressional District, covered a range of policy topics, including the withdrawal from Afghanistan, applying a “nuanced approach” to dealing with Iran.

Top of mind: “We’ve had classified discussions with the White House on their approach to Iran. I’m confident they are being thoughtful, deliberative [and] substantive in their approach to Iran. Obviously, I can’t share all the details of those conversations, but I know that the president and his closest advisors have Israel’s security top of mind when they’re thinking about this issue. There’s at least three big domains that we need to be addressing when we address Iran. One is their ballistic-missiles program, which is, in some ways, actually the most near-term threat to Israel’s security. The other is their development of a nuclear weapon, of course. And the third is their funding of proxy terror groups throughout the region. And I know that there’s sometimes the aspiration, the conviction that we need to solve all three at the negotiating table, or take all three off the negotiating table. But really, those three things can be can be addressed in three different ways, [along a] spectrum from soft all the way to hard power, and what I have been raising to the administration and what I would like to see from the administration is a nuanced approach to how we’re going to deal with those three different issues and in continuing to keep Israel’s security top of mind as they do so.”

Family heroes: The Newton, Mass., native, 33, spoke about his Jewish family’s roots in the area and in the U.S. military, Auchincloss served in the Marine Corps from 2010 to 2015. “My great-grandparents fled the Russian pogroms before World War I, arrived in Chelsea [Mass.] and, like many Jewish emigres at the time, they built a textile business and scraped by. In fact, my great-grandmother, Clara, became something of a political force in Chelsea, behind the scenes in the 1920s. But they never made a whole lot of money. And my grandfather, Melvin, their son, when he was 17 years old, tried to enlist in the Marine Corps in 1942. And this was at a time when the Marine Corps, one. was losing the war in the South Pacific and, two, when Jews in Europe were in the middle of a campaign of genocide. And the United States Marine Corps, looked at that 17-year-old skinny, Jewish kid with no money and sent him to Purdue to study engineering, because he did well on an academic test they had given him. And I’ve always found that to be one of the most remarkable exemplars of American exceptionalism that at a time when Jews were being exterminated, at a time when the Marine Corps needed every rifle they could get, a skinny 17-year-old Jewish kid with no money and no prospects went to Purdue because the U.S. government took a chance on him. He turned that into a brilliant career in orthopedic surgery and science. And I’ve always felt growing up that I wanted to pay back that incredible investment that the Marine Corps made in him. And so I joined the Marines out of college myself, commanded a platoon, as you said, in Helmand, and then a platoon in Panama. And really try to bring it full circle for the family.”

No retrenchment: Auchincloss rejected any premise that the withdrawal from Afghanistan served as a retrenchment to a 1990s approach towards combating terrorism. “I do not think that the United States should retain the war footing that it had for the last 20 years vis-a-vis the Middle East and Central Asia. I don’t think that those regions’ strategic and economic importance on the world stage justify the amount of bandwidth, time, troops, [and] material that were invested in them over the last 20 years,” the congressman said. “The United States should be focusing its international relations on the great race with the Chinese Communist Party, and its strategic economic diplomatic dimensions. We should be focused on leadership for transnational challenges, like climate change and public health and yes, terrorism. But these are issues that require multilateral alliances that require a lot of soft power, and that require the credibility that when we do need to do surgical strikes, the nations of the world understand their legitimacy. And the ongoing war in Afghanistan, and the war in Iraq, I think, moved us backwards on those fronts.”

Investigation: While hesitant to offer any criticism of the withdrawal, the Afghanistan War veteran did call for a more open investigation. “I have been hesitant to be critical because you can’t armchair-quarterback a 20-year war without all the information. And for that reason, I added an amendment to the NDAA — to the defense authorization — that gives the Afghanistan commission subpoena power to declassify and access decision-making documents from the last 20 years — from 9/11 to today — because we’ve got to understand better over the course of four administrations why we were doing what we did,” Auchincloss continued. “But I’m not ready to slam the table and say it was a huge mistake, because you don’t have a small footprint. Bagram [Air Base] is the size of a small city; you don’t keep a couple hundred troops there. You’d probably have to have thousands. And you can question our retrograde from Bagram, which, it seems like, allowed the Taliban to decarceration some prisoners who are pretty dangerous, without necessarily suggesting that we needed to have held Bagram permanently going forward.”

Friendship goals: “[Rep.] Ritchie [Torres (D-NY] and I connected before we took office last fall, and just immediately found both a personal and an ideological affinity in how we approach politics. Both of us had been city councilors before. Both of us are on the young side, obviously, for new members of Congress. And we are both deeply progressive in, I think, the fundamental sense of the word, which is to say you’re willing to overcome short-term frictions and transaction costs to achieve longer-run higher states. You’re unwilling to let the status quo impede progress.”

Local government: Auchincloss, who toured Newton Housing Authority’s Norumbega Gardens with Torres on Wednesday, spoke how their shared local government background brought them a different understanding to Congress. “Both of us come from city council backgrounds, where, at the local level, and for all the friction of local governance, it’s solutions-oriented. At the end of the day, you got to take the trash out, you got to pave the roads, you got to build the schools, you got to make sure the dog parks are getting the investments that they need. And we want to bring that solutions-oriented approach to Washington as well,” Auchincloss said. “And so he and I have really hit it off. We were together on Jan. 6, for much of that evening, kind of both of us processing those events. And we’ve been continuing to work together on financial services, especially on housing issues, which are really Ritchie’s prime areas of focus and where he’s already established himself as a tremendous moral voice in Congress.”

Campus watch: “Support for Israel right now is a bipartisan issue. I think the Iron Dome vote underscores that more than 450 representatives and the vast majorities of the respective parties voted in favor of Iron Dome support. I do think that’s shifting. I think that on college campuses across the country, and in high schools across the country, being anti-Zionist is increasingly being conflated with being progressive. And those of us who care deeply about Israel’s security and the U.S.-Israel relationship need to be watchful and need to be responsive to this current [situation] because I think we can appreciate that what’s being discussed in the college debating rooms of 2021 is going to be discussed in the halls of Congress in 2035.”

Bonus: Favorite Yiddish word? “Chutzpah.” Favorite Jewish food? “My grandmother’s matzo ball soup. I mean, my grandmother used to make it all the time.” Recent book recommendation? A Short History of Europe by Simon Jenkins. Dunkin Donuts or Sam Adams? “Dunks for sure.”