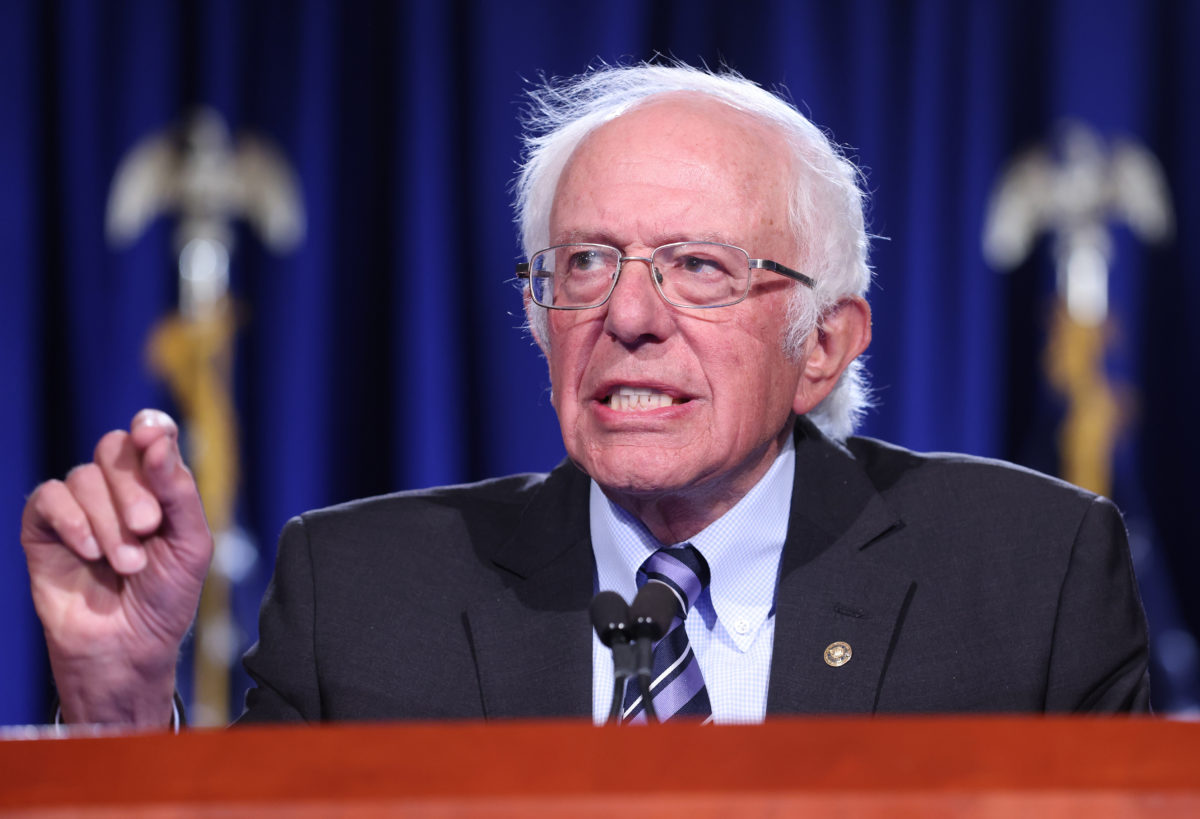 On Feb. 3, a few weeks after he proposed a sweeping $1.9 trillion pandemic aid plan — one of the largest stimulus packages in American history — President Joe Biden met with a group of leading Senate Democrats in the Oval Office as the bill made its way through Congress.

Sen. Debbie Stabenow (D-MI), smiling enthusiastically behind her facemask, expressed relief to be meeting with the newly elected president after a volatile transition, while Sen. John Tester (D-MT), who had never visited the Oval, marveled at the “amazing room.”

But Sen. Bernie Sanders (I-VT), who had that day assumed leadership of the Senate Budget Committee, had more serious concerns in mind — and, in his typically no-nonsense manner, almost immediately raised the stakes.

“If we cannot deliver, authoritarianism may be on the march,” he told Biden, according to an account of the meeting detailed by the Washington Post journalists Bob Woodward and Robert Costa in their forthcoming book, Peril, an advance copy of which was obtained by Jewish Insider.

Sanders argued that passing a major rescue bill would demonstrate to working-class voters — who he believed former President Donald Trump had largely lured away from the Democratic Party — that the federal government was capable of improving their lives for the better, according to the book.

“The future of democracy depends on which party is the party of the working class,” the authors paraphrase Sanders as saying in the Oval.

The book, which is published by Simon & Schuster and comes out on Tuesday, is the final installment in a trilogy of scoop-heavy best-sellers by Woodward about the Trump administration, including Fear: Trump in the White House (2018) and Rage (2020). Peril covers the tumultuous conclusion of the Trump presidency and the beginning of the Biden administration.

Following the deadly Capitol riot less than a month earlier, Sanders had reason to believe that American democracy was in serious jeopardy.

But as the Brooklyn-born son of a Jewish immigrant father from Poland whose family members perished in the Holocaust, Sanders was also concerned that the insurrectionists Trump had incited to breach the halls of Congress — one of whom was photographed wearing a “Camp Auschwitz” shirt — were merely a prelude to future acts of violence.

“As a kid, I read a lot about the Holocaust and Germany in the 1930s,” Sanders “told others” after the meeting, according to Woodward and Costa. “Germany was one of the most cultured countries in Europe. One of the most advanced countries. So how could a country of Beethoven, of so many great poets and writers, and Einstein, progress to barbarianism?”

“How does that happen?” Sanders, who turned 80 earlier this month, reportedly wondered. “We have to tackle that question. And it’s not easy.”

Such questions are somewhat unusual for Sanders, who rarely seems to have invoked the Holocaust throughout his long career in politics — at least publicly.

“I am not someone who spends a lot of time talking about my personal background because I believe political leaders should focus their attention on a vision and agenda for others, rather than themselves,” Sanders wrote in Jewish Currents two years ago. “But I also appreciate that it’s important to talk about how our backgrounds have informed our ideas, our principles and our values.”

During his first presidential bid in 2016, however, Sanders was apparently reluctant to tout his Jewish background, referring to himself only as “the son of a Polish immigrant who came to this country speaking no English and having no money” in a victory speech after the New Hampshire Democratic primary.

His remarks were puzzling to some observers who noticed that Sanders had omitted that his father was Jewish.

But after the election of President Donald Trump, the socialist senator took a more personal tack, vividly describing his father’s background during a presidential campaign kickoff event in March 2019 at his alma mater of Brooklyn College.

“I learned a great deal about immigration as a child because my father came to this country from Poland at the age of 17, without a nickel in his pocket,” Sanders — whose Jewish mother was born in New York City — said at the rally. “He came to escape the crushing poverty that existed in his community, and to escape widespread antisemitism. And, it was a good thing that he left Poland when he did because virtually his entire family there was wiped out by Nazi barbarism.”

The Vermont senator, who if elected would have been the first Jewish president in American history, may have felt he had found more evidence to support that analogy when, in March 2020, a lone protestor raised a Nazi flag at one of his campaign rallies in Arizona.

“As someone whose family was wiped out by Hitler and as an American,” Sanders said after the incident, “to have in this country somebody bringing forth the most detestable symbol in modern history is unspeakable.”

According to statistics released last month by the FBI, Jews are the target of more than half of all religiously motivated hate crimes in the United States.

“Antisemitism is rising in America,” Sanders told CBS in May. “It’s rising all over the world. That is an outrage. And we have got to combat antisemitism.”

Still, by the time he walked into the Oval Office for the meeting with Biden earlier this year, Sanders was likely more apprehensive about the future of the republic than his own personal safety.

“He told Biden and his colleagues they could not take anything for granted after January 6,” Woodward and Costa write. “Who says more horror could not happen here?”

Throughout the book, Woodward and Costa report a number of incidents that presaged the Capitol attack, including an August 2017 phone conversation between Trump and former House Speaker Paul Ryan (R-WI) shortly after the deadly neo-Nazi rally in Charlottesville.

“These people love me,” Trump told Ryan, speaking of the rioters who arrived in Charlottesville bearing tiki torches while chanting that Jews would not “replace” them. “These are my people. I can’t backstab people who support me.”

Ryan, distancing himself from the former president, pointed out that there “were white supremacists and Nazis in Charlottesville,” according to Peril.

“Well, yeah, there’s some bad people,” Trump replied. “I get that. I’m not for that. I’m against all that. But there’s some of those people who are for me. Some of them are good people.”

Elsewhere in Peril, the authors document an instance in which Trump himself invokes an antisemitic trope to suggest that his Jewish son-in-law and senior advisor, Jared Kushner, who led Middle East peace efforts, harbored greater loyalty to Israel than his native country.

“You know,” Trump said, “Jared’s more loyal to Israel than the United States.”

Publicly, Trump leveled a similar, if somehow inverted, charge in August 2019, when he accused American Jews who vote Democratic of disloyalty to Israel — remarks that were widely criticized as antisemitic.

“I think any Jewish people that vote for a Democrat, I think it shows either a total lack of knowledge or great disloyalty,” the former president told reporters in the Oval Office where, two years later, Sanders would issue his dire warning to Biden.