JI’s guide to races to watch in the general election 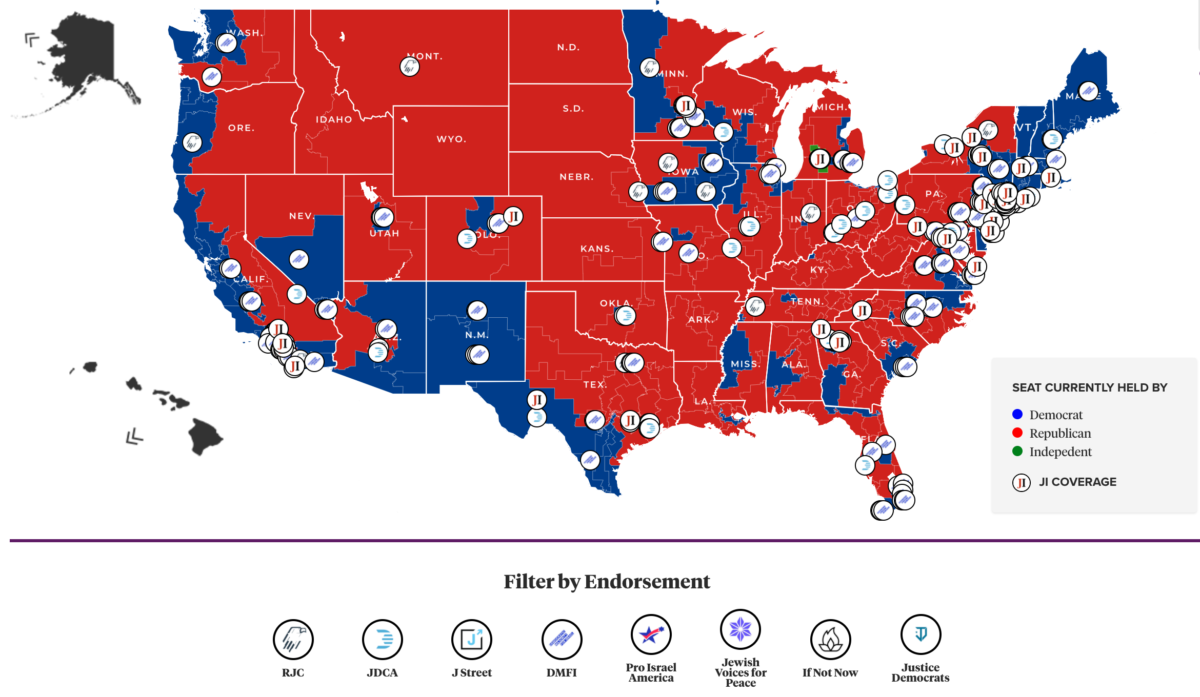 With three weeks until the 2020 general election, the Jewish Insider elections team has created a short guide to the key Senate and House races to watch in the wildest election year of our time. Read through interviews, in-depth looks at races across the country and candidate questionnaires with answers to some of the questions that matter most to JI readers. Daily Kickoff updates on these races will continue over the next three weeks.

New York 22nd: Former Rep. Claudia Tenney (R-NY) held her seat for just one term before losing to Rep. Anthony Brindisi (D-NY) by less than 2 percentage points in 2018. A recent poll shows Brindisi in the lead in this year’s rematch.

New York 1st: Rep. Lee Zeldin (R-NY), one of two Jewish Republicans in Congress, is facing a challenge from Democrat Nancy Goroff in this Long Island swing district that the GOP expects to hold on to in November.

California 50th: After losing to then-incumbent Rep. Duncan Hunter (R-CA) in 2018, Ammar Campa-Najjar — who grew up in Gaza — is mounting a second bid for Congress in the district. Due to Hunter’s resignation and arrest, Campa-Najjar this time faces former Rep. Darrell Issa (R-CA), who served in Congress in a neighboring district for nearly 20 years. An early September poll showed the two in a statistical tie.

California 53rd: San Diego City Council President Georgette Gómez has the backing of the pro-Israel community — as well as progressives like Sen. Bernie Sanders (I-VT) and Rep. Alexandria Ocasio-Cortez (D-NY) — in her race against Qualcomm heiress and fellow Democrat Sara Jacobs. A late September poll found Jacobs with a solid lead, but nearly 40% of voters said they were still undecided.

Pennsylvania 7th: Freshman Rep. Susan Wild (D-PA) appears to have shot ahead of Republican challenger Lisa Scheller. A poll in late September found Wild more than 10 points ahead of Scheller, and the Cook Political Report recently moved the district from “Leans Democratic” to “Likely Democratic.”

Pennsylvania 10th: Freedom Caucus member Rep. Scott Perry (R-PA) is fending off a challenge from Auditor General Eugene DePasquale, who appears to have the momentum in the final weeks of the race. Perry recently faced scrutiny from the Republican Jewish Coalition, which endorsed him, for being one of the few lawmakers to vote against a resolution condemning the QAnon conspiracy theory.

Georgia 7th: After losing by less than 500 votes in 2018, Democrat Carolyn Bourdeaux is making another bid for this seat. The GOP is hoping that political newcomer Rich McCormick, a veteran and doctor, can keep the seat in Republican hands, despite a “Lean Democratic” rating from the Cook Political Report.

Virginia 2nd: In a rematch of the 2018 race, first-term Rep. Elaine Luria (D-VA) and former Rep. Scott Taylor (R-VA) are working to win over undecided voters. Their military-heavy district has increasingly tipped toward Democrats in recent years, but the race remains a tossup, according to the Cook Political Report.

Indiana 5th: With early backing from the Democratic Congressional Campaign Committee, State Rep. Christina Hale has maintained a lead in most polls over State Sen. Victoria Spartz, who self-funded her campaign to break through a crowded Republican primary field. Both candidates have heavily emphasized their bipartisan credentials.

Michigan 8th: Although first-term Rep. Elissa Slotkin (D-MI) is running in a Republican stronghold and has established a reputation as a Trump administration critic on national security issues, she is favored to win reelection. Slotkin and her allies have attacked opponent Paul Junge for advertisements they say are antisemitic.

Minnesota 7th: Former Lt. Gov. Michelle Fischbach has a solid shot at unseating Rep. Collin Peterson (D-MN), a rare Democrat in a conservative-leaning district. While Peterson has maintained a reputation as a centrist and is popular with the agriculture industry, Republicans believe Fischbach may give them a chance to flip this seat.

North Carolina 11th: Political newcomer Madison Cawthorn nabbed a surprise victory in the runoff to succeed former Rep. Mark Meadows (R-NC), who departed the seat for a job as the president’s chief of staff. The paraplegic 25-year-old’s campaign has been riddled with controversy, including social media posts about Adolf Hitler, and he’s found a formidable challenger in retired Air Force Colonel Moe Davis.

Nebraska 2nd: After narrowly losing to Rep. Don Bacon (R-NE) in 2018, Kara Eastman is again neck-and-neck with the incumbent congressman in her second bid to unseat him. Bacon’s campaign has sought to paint the progressive Eastman as too far left for the district.

New Mexico 2nd: Despite struggling through a bruising Republican primary, State Rep. Yvette Herrell has managed to remain neck-and-neck with Rep. Xochitl Torres Small (D-NM) in this rematch of their 2018 faceoff. Torres Small defeated Herrell by less than 2 percentage points in 2018, and Herrell has continued to insist the election was stolen.

Texas 10th: After a narrow loss in 2018 to incumbent Rep. Mike McCaul (R-TX) in the Austin-area district, attorney Mike Siegel is again challenging the longtime Republican congressman. An early September poll commissioned by Siegel’s campaign had McCaul with a two-point lead over Siegel.

Georgia: Much of the recent polling in Georgia — once a Republican stronghold — shows Sen. David Perdue (D-GA) in a dead heat with Democratic challenger Jon Ossoff, although one survey gave Perdue an edge.

Georgia special election: With no candidate close to 50% in the polls, the race to replace former Sen. Johnny Isakson (R-GA), who retired in late 2019 amid health concerns, appears headed to a runoff. Republicans Sen. Kelly Loeffler and Rep. Doug Collins are neck-and-neck in most recent surveys, although Loeffler seems to hold a slight edge. Meanwhile, Democrats worry that Matt Lieberman — son of former Sen. Joe Lieberman (D-CT) — could serve as a spoiler and prevent Rev. Raphael Warnock, who is currently leading the Democratic pack, from making the runoff ballot.

Arizona: Democrat Mark Kelly leads Sen. Martha McSally (R-AZ) in recent polling in Arizona, which appears to be shifting increasingly toward Democrats, given a growing population of Latino voters and shifts among college-educated whites and opposition to President Donald Trump within the state.

Maine: Sen. Susan Collins (R-ME) — one of the most moderate Republicans in Congress — is looking to save her seat in a tough matchup against speaker of the Maine House of Representatives Sara Gideon. With both candidates statistically tied in recent polls, the race will come down to the wire in a seat considered vital to Democrats’ chances of retaking the Senate.

South Carolina: Sen. Lindsey Graham is scrambling to hold onto his Senate seat amid a fierce challenge from Jaime Harrison, who has shattered fundraising records and pulled even in recent polls. As the campaign approaches its finish line, Graham also finds himself chairing Amy Coney Barrett’s confirmation hearings, reneging on a promise he made in 2016 not to support a confirmation in an election year.

Kansas: Although some Democrats had written off the Kansas Senate race as a lost cause after Rep. Roger Marshall (R-KS) defeated controversial immigration hardliner Kris Kobach, state Sen. Barbara Bollier has delivered a strong campaign, with recent polls indicating that the race will come down to the wire.

Michigan: Sen. Gary Peters (D-MI) is locked in a tight race with veteran and businessman John James. James lost a 2018 challenge to Sen. Debbie Stabenow (D-MI), but has risen in the polls against Peters in the final weeks of the campaign. A poll released Monday found Peters and James virtually tied.

Alaska: The Senate race in Alaska is tightening, with Al Gross — a Democratic-backed independent — closing the gap with incumbent Sen. Dan Sullivan (R-AK). Both parties are pouring money into the state, in a race that has turned out to be unexpectedly competitive.