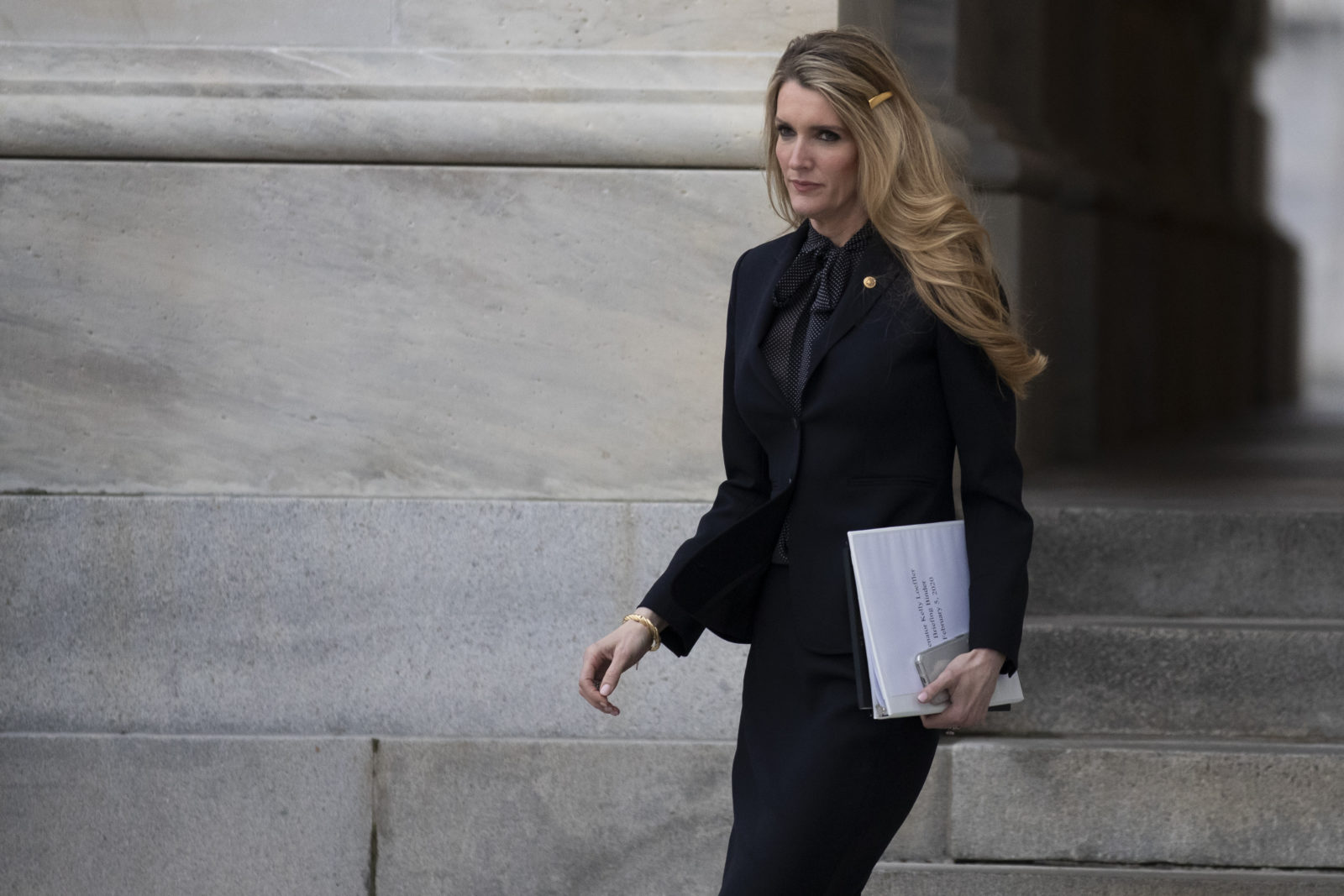 Will Georgia voters keep Kelly Loeffler in the Senate?

Last December, when Georgia Gov. Brian Kemp picked Kelly Loeffler to succeed retiring Republican Sen. Johnny Isakson, the thinking, it seemed at the time, was that she could corral support among suburban women in a state that has been trending purple in recent years.

But as the wealthy business executive braces for a competitive Senate special election this November, Loeffler’s apparent strengths have been overshadowed by a reputation damaging insider-trading scandal. The fallout has put her on the defensive in the crowded special election that includes two formidable Democratic opponents and a Republican challenger, Georgia Rep. Doug Collins, who is out for revenge after being snubbed for the Senate nod, despite having the backing of President Donald Trump. Come November, all candidates, regardless of party identification, will be on the ballot. If no candidate clears 50%, a runoff will be held in January.

Loeffler, of course, is ready to move on from the scandal and has been for some time. She denied from the start that there was any sort of foul play. Late last month, she was vindicated when the Justice Department dropped its investigation into allegations that she had dumped stocks after a briefing on the coronavirus in late January.

“I have been completely exonerated,” Loeffler, 49, told Jewish Insider in an interview. “I think it was exposed for what it was, which was a political attack.”

But observers say it will be difficult for Loeffler to overcome the negative news coverage, which has defined her short tenure in the Senate.

“She seems to have damaged her standing with the voters who had never heard of her,” said Niles Francis, a young commentator on Georgia politics and a contributor to Decision Desk HQ. “She was always going to have a hard time getting her name out there because she’s never run for office.”

Francis predicted that the bad press would linger into the fall even though the investigation has been closed. “That’s not going away anytime soon,” he said. “Make no mistake.”

Andra Gillespie, an associate professor of political science at Emory University, echoed that assessment. “The reputational damage has been done,” she told JI in an email. “Republican activists were already skeptical of Loeffler, and in Doug Collins they have a strong and familiar alternative who took advantage of Loeffler’s weakness to solidify a base of support.”

Collins, who is well ahead of Loeffler in recent polls, isn’t letting her off the hook just yet. “I’ve not seen anybody so excited about not being indicted since Hillary Clinton,” sniped the four-term congressman, who represents a portion of north Georgia, in a recent phone conversation with JI, later adding, “There’s just too many coincidences and not enough explanation.”

Collins, 53, has positioned himself as a vociferous Trump ally, using his high-profile status as a ranking member of the House Judiciary Committee to defend the president during last year’s impeachment inquiry.

He spinned it as a bad sign for Loeffler that Trump hasn’t yet made an endorsement in the race. “I know he wanted us to start with,” said Collins. “I don’t think that’s changed very much.”

Still, Loeffler is quick to boast of her ties to the president. “We have a great relationship,” she said, noting that she was chosen to serve on a congressional task force Trump assembled in April to gather advice on re-opening the economy. “I speak with him regularly.”

Loeffler steered clear of criticizing her opponent by name in two recent phone interviews, instead alluding to Collins as a “career politician” who was ill-equipped to address the economic fallout from the coronavirus crisis — language reminiscent of a recent attack ad from her campaign.

She emphasized that her experience as a businesswoman who worked through the financial crisis of 2008 puts her in a rarefied position.

“There is no one else in my race that has a business background,” said Loeffler. A co-owner of the WNBA team Atlanta Dream, she most recently served as the CEO of the cryptocurrency company Bakkt, a subsidiary of the Intercontinental Exchange, founded by her husband, Jeffrey Sprecher, chairman of the New York Stock Exchange.

Loeffler touted her economic recovery plan, USA RISE, which includes legislation that indemnifies businesses and healthcare providers from being held accountable if customers or employees contract COVID-19. “My focus is on working for Georgia,” she said, “and people see I’m working for them every single day.”

“I hit the ground running,” Loeffler said of her initial five months in office, adding that her first major meeting was a classified briefing on the targeted assassination of Iranian General Qassem Soleimani. “It was obviously important because it demonstrated the president’s commitment to fighting terrorism,” Loeffler said of the killing. “It just highlights the need to have a strong military at all times.”

“We have to continue to stand up to Iran,” added Loeffler, who endorsed Trump’s decision to withdraw from the Iran nuclear deal and recently signed on to a resolution calling for the United Nations to extend an arms embargo on Iran that is set to expire this fall.

Loeffler told JI that some of her earliest actions in the Senate were to show her support for Israel. Although she has yet to visit the country, she said she hoped to get there next year. Her husband, she added, has spent time in Israel because Intercontinental Exchange owns a financial services company, SuperDerivatives, which is based in Tel Aviv.

Loeffler backed Trump’s decision to move the U.S. Embassy to Jerusalem, writing in a position paper that she will “continue to advocate for it remaining there.” She also made clear that she was in favor of Trump’s Middle East peace proposal. She did not explicitly lean one way or the other regarding the potential annexation of portions of the West Bank, which Israeli Prime Minister Benjamin Netanyahu has said could happen as soon as July.

The senator was equally deferential with regard to the Trump administration’s recent push to withdraw U.S. troops from a peacekeeping force in the Sinai Peninsula.

“Their focus continues to be not only strategic, but targeted for the intelligence that they’re receiving,” she said. “And so I really trust that we have the right leaders in place making those decisions.”

Eric Tanenblatt, a GOP activist in Atlanta and the global chair of public policy and regulation at the law firm Dentons, praised Loeffler’s commitment to the U.S.-Israel relationship, noting that her presence in the Senate was good for Georgian Jews.

“As someone who’s a member of the Jewish community in Atlanta and someone who knows Kelly,” he said, “I’m very comfortable and want to see her stay there as long as she can.”

Collins holds foreign policy views similar to his opponent’s. He attacked the Iran nuclear deal as “one of the worst foreign policy decisions ever made by the United States,” adding, “I’m glad it’s gone.”

He regards Trump’s peace plan as a useful “framework” that he hopes will bring the Israelis and the Palestinians into negotiations with one another.

“I’m in favor of a solution that protects Israel and protects the Palestinians and what they need,” he said. When asked about annexation, he was careful with his words. “Israel has to protect itself,” he said. “As they go forward,” he added, “I think it is something, from the Israeli perspective, in their self-interest, so we’ll see how that works.”

Though he has not been to Israel, Collins said he would like to visit at some point, either in a personal or in a professional capacity. “I flew over it when I went to Iraq,” said the congressman, who in 2008 was deployed to Balad Air Base in Iraq as a member of the United States Air Force reserve.

Doug Ross, a pro-Israel advocate who is active in Atlanta’s Jewish community, was enthusiastic about Collins’s support for the Jewish state.

“Doug’s first major legislative achievement as a freshman member of Congress was authoring a bill that strengthened Israel’s qualitative military edge,” he wrote in an email to JI. “His affinity for Israel derives from moral, ethical, religious, economic and national security imperatives.”

Collins has raised nearly $2.5 million in his Senate bid, according to the Federal Election Commission — no small sum — though that number is dwarfed by Loeffler’s nearly $11.7 million war chest, $10 million of which she loaned herself.

The congressman said that as a Republican he did not begrudge his opponent’s effort to leverage her wealth, which is reportedly $500 million.

“If you can make as much money as you possibly can, I’m all for that,” he told JI.

But he was still doubtful that Loeffler would be able to convince voters to pick her in the upcoming November election. “The people of Georgia see through someone trying to buy something,” he averred.

“Let me just say, I was blessed by success in life,” said Loeffler, who was raised on a farm in rural Illinois. “Giving back has always been part of my life,” she added in her defense, “and not only giving back financially but through public service. I mean, I left the private sector to serve all Georgians to protect the American dream.”

Loeffler’s efforts in the Senate, Collins conceded, have been admirable, but he insisted that they in no way compare to his extensive legislative record, which includes bipartisan prison reform legislation he introduced with Rep. Hakeem Jeffries (D-NY).

“She’s new and I get that,” Collins said. “But I think a lot of it is we’re tested, we’re proven, people know where we’re at.”

Tanenblatt, however, contested that view, arguing that Loeffler was finding her footing despite a tumultuous introduction to the Senate.

“She’s on the air now, she’s introducing herself to Georgia voters, she’s got a flight of ads,” he said. Collins, he added, “got a lot of notoriety during impeachment, but he’s a north Georgian congressman, and Kelly is statewide.”

The polls say otherwise, though there is still a long way to go until Election Day, when voters will choose among a roster of candidates that includes Matt Lieberman, the son of former Sen. Joe Lieberman (I-CT), and Raphael Warnock, senior pastor of Ebenezer Baptist Church in Atlanta — both of whom are frontrunners on the Democratic side.

Collins predicted that the race, as crowded as it is, will advance to a runoff slated for January 2021, adding that it is unlikely one candidate will garner the majority of the vote needed to emerge victorious.

Amy Steigerwalt, a professor of political science at Georgia State University, agreed that the election would most likely go to a runoff. “Is it a runoff between Collins and Loeffler,” she wondered, “or one of the Republicans and a Democrat?”

The albatross that is Loeffler’s recent stock-trading scandal, Steigerwalt added, undercuts the senator’s claims about her business acumen bolstering her political approach.

Collins believes the scandal has damaged Loeffler’s reputation in such a way that, if he weren’t in the race, the seat could go to the Democrats.

Loeffler, however, is sanguine about her prospects.

“I’m working seven days a week to stay in touch with Georgians across our state and to hear from them and to let them know that they have a strong conservative businesswoman fighting for them in Congress,” she said, “not a career politician.”