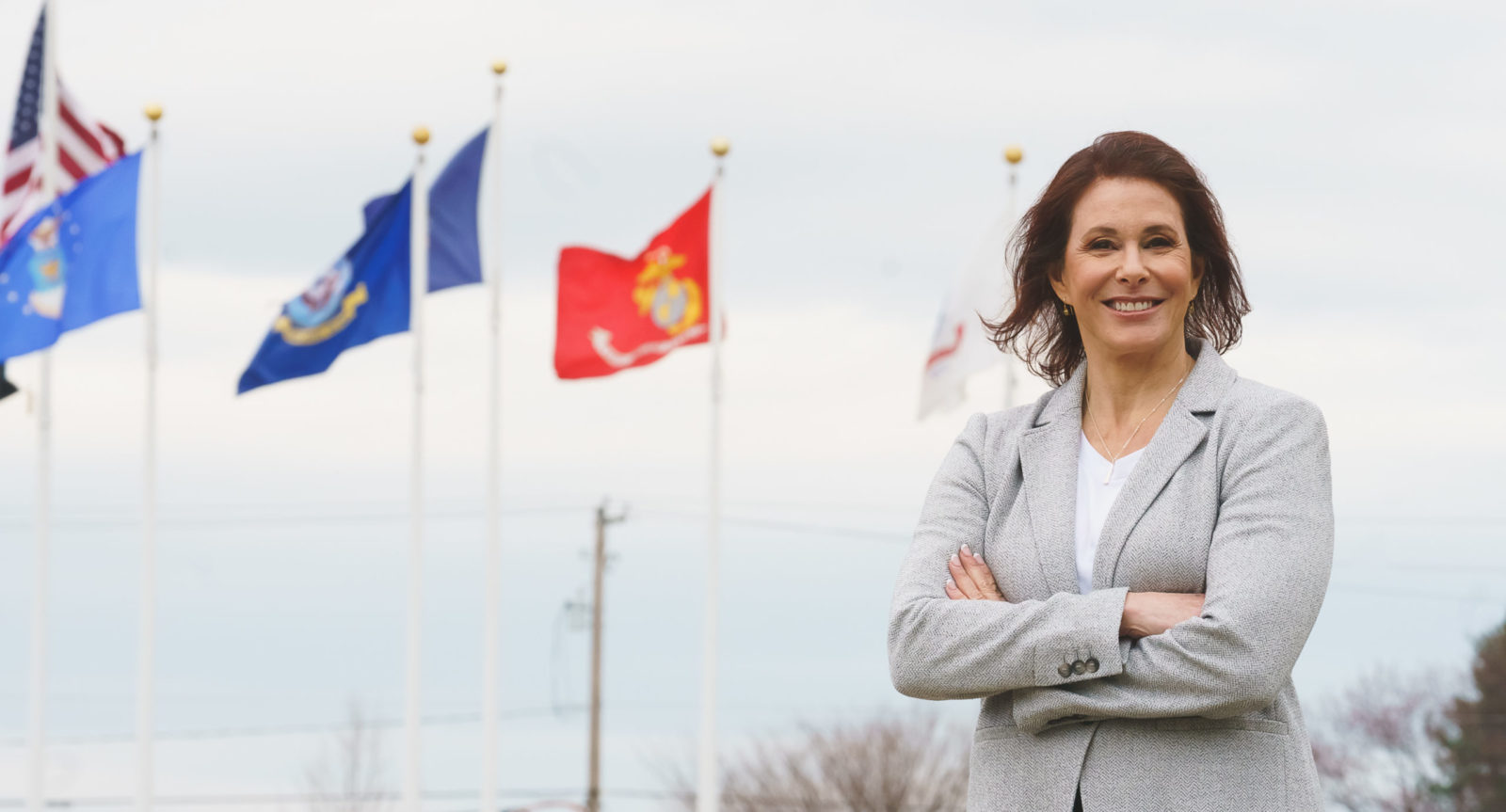 Will an endorsement from Trump boost Lisa Scheller’s bid to reclaim a former GOP seat in Pennsylvania?

Politics aside, it could be argued that Lisa Scheller and the congresswoman she hopes to unseat, Rep. Susan Wild (D-PA), are cut from the same cloth.

Both women have lived most of their adult lives in Pennsylvania’s 7th congressional district, which encompasses all of the Lehigh Valley and some surrounding areas. Both have established impressive careers and raised families in the district. And they’re both actively engaged in the Jewish community and have been involved in local politics for years.

Scheller knows she doesn’t have an easy battle ahead of her. To take on Wild, she will first have to defeat former Lehigh County Commissioner Dean Browning in the June 2nd Republican primary.

But Scheller believes that her story — recovering from an addiction to heroin and alcohol and going on to raise a family and run one of the largest manufacturing companies in the region — will resonate with voters in the purple district, propelling her to victory.

Scheller, 60, considers herself to be a product of that American dream. Her Eastern European grandparents came to the U.S. at the start of the 20th century and founded a small aluminum pigments manufacturing company, Silberline Manufacturing, that now employs more than 600 people worldwide.

“My grandparents were drawn to America on a set of ideas — personal liberty, a trust in the wisdom of the common person, and equality of opportunity — which I call the American dream,” Scheller said. “About 40% of what we manufacture in the United States is exported around the world. So I am very, very proud of what ‘Made in America’ means.”

Scheller was born in Greenwich, Connecticut, and grew up in Tamaqua, Pennsylvania, after her grandfather moved his company to Lansford, 37 miles northwest of Allentown, where she now resides. Scheller graduated from Blair Academy in Blairstown, New Jersey, and earned a bachelor’s degree in math from the University of Colorado and a masters in manufacturing systems engineering from Lehigh University.

In recent years, Scheller has begun to share her own personal story as a recovering heroin addict and alcoholic. She began drinking at age 11, and the next decade of her life was marked by hospital stays, bouts of homelessness and domestic violence. In 2018, after 36 years of sobriety, she publicly shared her story to raise awareness of the opioid epidemic in Pennsylvania, which has seen some of the highest overdose death rates in the country. That same year, she founded Hope & Coffee, a local non-profit coffee shop to provide support for individuals in recovery.

Scheller’s first foray into politics came in 2011, when she launched a successful campaign to serve on Lehigh County’s Board of Commissioners, a role she held until 2015, including a two-year stint as chair of the board.

Around the same time, in 2013, Wild also entered politics. Wild lost her own county commissioner bid that year, but was later appointed the city solicitor of Allentown, where Scheller currently resides.

Scheller has faced criticism for using her wealth to bolster herself and other candidates. While she leads Browning in fundraising, she has put more than $500,000 of her own money into her congressional run. She and her former husband, Wayne Woodman, both contributed large sums to Wild’s 2018 Republican challenger, Olympic gold medalist Marty Nothstein.

The district — and state — are of great importance to the Republican Party in the run-up to the 2020 election. Last week, President Donald Trump toured a medical supplies facility near Allentown, his 18th trip to the state since taking office. Scheller did not meet with the president on the short trip since it was billed as an official White House event. But the congressional candidate could benefit from Trump’s investment in the state.

“I absolutely believe that this race is winnable by a Republican,” Scheller maintained. “The values of the district are much more in line with the values that I would prefer that I represent than the values that Susan Wild represents.”

Both GOP candidates have embraced Trump in their campaigns, though in 2016 Scheller maxed out in contributions to two other presidential candidates: Sen. Marco Rubio (R-FL) and Ohio Gov. John Kasich. Last week, Browning attacked Scheller for her 2016 donation to Kasich, who has become an increasingly vocal critic of the president.

Last Friday evening, Trump tweeted his endorsement of Scheller and encouraged donations via her website. Scheller told JI she was “humbled” to receive the endorsement. “President Trump promised to Make America Great Again, and I am honored to fight alongside him to keep that promise,” she added.

Scheller has always felt connected to her Jewish identity. Growing up, her family was one of just two Jewish families in the small town of Tamaqua, Pennsylvania. Her mom drove 15 miles every Saturday to attend Shabbat services and Jewish school at a nearby Reform synagogue. “I’m very proud of my Jewish heritage,” she told JI. Scheller is a member of the Lions of Judah, a giving group of women who individually contribute upwards of $5,000 annually to their local Jewish Federation.

Wild was also active in the Jewish Federation of the Lehigh Valley, having previously sat on the organization’s board. Despite their political and religious crossovers, Wild and Scheller say they don’t know each other.

If elected, Scheller will increase Jewish representation in Congress on the Republican side and is one of a few candidates vying to be elected as the next Jewish Republican congresswoman. Republican Jewish Coalition executive director Matt Brooks told JI his organization “is very excited” about Scheller’s candidacy. “We believe that she has an outstanding chance of joining Rep. Lee Zeldin (R-NY) and David Kustoff (R-TN) as Jewish Republicans in the House come November,” Brooks predicted. He added that Scheller “has got the right mix, drive and passion that will make her not just a leader in Congress but somebody who will be outspoken on the issues that the Jewish community cares about.”

“I think it would be very, very exciting to be the third or fourth Republican Jewish woman to ever be in Congress in the history of this country, but that is not what motivated me to run,” Scheller told JI. She added that she wants to encourage and help other Jewish Republican women to get elected. “You don’t want to be alone there,” she said, noting that there is room to grow the group of Republican Jewish legislators in Washington.

In the interview with JI, Scheller accused Wild of providing a “very weak” rebuke of the comments made by Rep. Ilhan Omar (D-MN) last year accusing pro-Israel activists of having an “allegiance to a foreign country.” Noting her own family history, Scheller said that growing up in a small rural Pennsylvania community “taught me what it is like to face antisemitism, and that was from people who just didn’t understand or hadn’t been exposed to the Jewish faith.”

Wild told Jewish Insider on Thursday that she was “dismayed, horrified, and upset” by the tropes Omar has used on Twitter — and that she raised the issue during a private conversation with the Minnesota congresswoman, with whom she shares a seat on the House Foreign Relations Committee. “I used it as an opportunity to try to educate her about why I was personally offended and why so many of us were,” Wild said.

Scheller, who speaks Hebrew fluently and describes herself as a Zionist in her position paper on Israel, first visited the Jewish state in 1985, at age 26, on a singles trip sponsored by the American Jewish Congress. She told JI that she was so inspired by the visit that she considered making aliyah and enlisting in the Israeli Defense Forces.

She chose instead to finish her degree in the U.S. and — after the unexpected death of her brother — took control of her grandparents’ company, putting to rest the idea of aliyah.

In the decades that followed, Scheller, who owns a home in Beersheba, found other avenues to express her connection to Israel. In 2012 she founded the Zin Fellows Program, a biennial mission to Israel’s Ben-Gurion University for community leaders across the U.S. She also founded the Woodman-Scheller Graduate Program in Israel Studies at the university’s Sde Boker campus, which provides English-language masters and doctoral programs for students from around the world.

Scheller told JI she believes it’s up to Israel to determine the terms of a peace agreement with the Palestinians based on reality. “Israel should never be forced to make a concession that would threaten its security in the name of a political peace deal,” she said. She added that she supports a “peaceful solution” to the conflict on the condition that the two leading Palestinian factions, Fatah and Hamas, “can come together and actually stop denying Israel’s right to exist and stop teaching violence and hatred as a way of life.”

Scheller criticized last year’s House resolution reaffirming U.S. support for a two-state solution (H.R. 326), which Wild co-sponsored along with close to 200 Democrats, because it “mandated” Israel’s commitment to a two-state solution. “I am more attuned to Israel finding its own way to peace, once we can get its neighbors to come together and actually say that Israel has the right to exist, rather than to force a solution from the U.S. onto Israel,” she explained. Scheller added that she would “proudly take on any member of Congress who wants to eliminate” military aid to Israel or make it “conditional on behavioral policy decisions.”