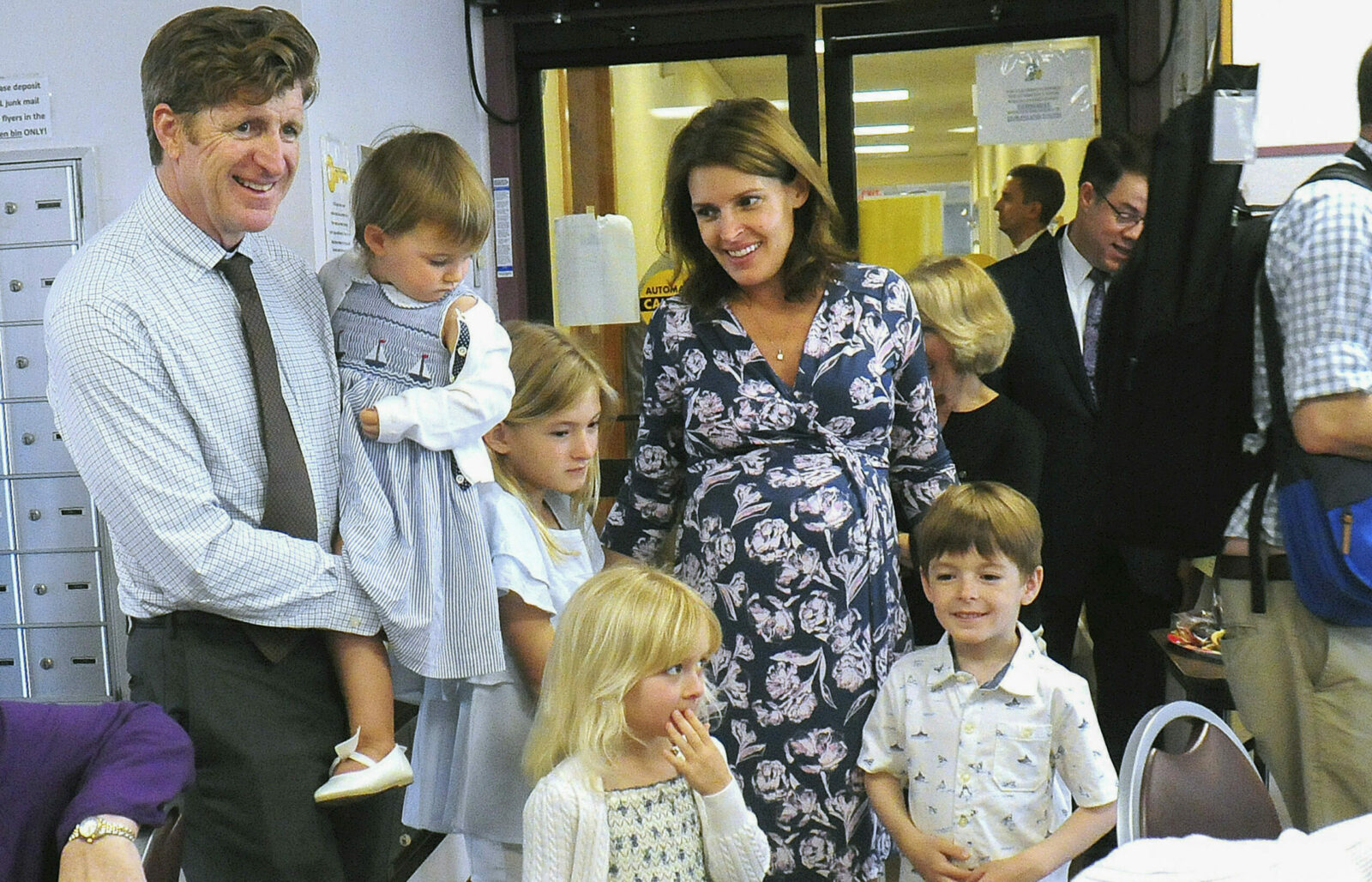 Ernest A. Brown/The Call via AP

Amy Kennedy grew up a stone’s throw away from Atlantic City, in the South Jersey shore towns of Pleasantville and Absecon. The 41-year-old former public school teacher and mental health advocate, who still lives in the area, remembers when a brash real estate mogul named Donald Trump came to the region in the early 1980s, opening up a string of extravagant casinos and gambling resorts that would eventually go bankrupt — while he profited.

“He didn’t seem to add value back into the community the way we had all been promised,” Kennedy told Jewish Insider in a phone interview from her home in Brigantine, assessing President Trump’s fraught history in Atlantic City. “And so it wasn’t a surprise when he left town and things were no better off than they had been before.”

It was the president’s more recent actions, however, that motivated Kennedy to run for Congress in New Jersey’s 2nd district, which includes the state’s southern portion. The mother of five — who is married to former Rhode Island Rep. Patrick J. Kennedy — was particularly disturbed by the Trump administration’s family separation policy.

“I wasn’t really sure what my role would be,” she said. “I just knew I wanted to get involved.”

Then the district’s representative, Congressman Jeff Van Drew, switched parties, pledging his “undying support” for the president, and the road ahead became much clearer. Van Drew defected to the GOP in mid-December, a day after he became one of two House Democrats to vote against impeachment. The conservative Democrat may have had his reasons for switching sides in a district that Trump won by nearly 5 percentage points in 2016.

But to Kennedy, his defection smacked of toadyism.

“It felt to me like that was a teachable moment,” Kennedy, who entered the race in early January, told JI. “When you’re pledging loyalty to another politician,” she said, “you’ve lost your way.”

Other voters may see things differently. Van Drew, 67, is well-known in South Jersey, having served as a state senator and assemblyman in the area for more than 15 years. He was elected to Congress in 2018, the district’s first Democrat since the mid-’90s.

“Only the most partisan Democrats have written him off,” said Michael DuHaime, a Republican strategist in New Jersey. “People have been voting for him for decades. Many will stick with him.”

Before she can face Van Drew, however, Kennedy has a more immediate challenge: the July 7 Democratic primary, postponed from June 2 due to the coronavirus pandemic. That vote isn’t a sure win by any means, experts say.

Kennedy’s most formidable opponent, Brigid Callahan Harrison, 54, a professor of political science and law at Montclair State University, has earned key endorsements from New Jersey Sens. Cory Booker and Robert Menendez and has the support of Democratic power broker George Norcross, whose brother is a congressman in a neighboring district.

Harrison also has the backing of most counties in the district, which earns her favorable ballot placement.

Polling in the district is difficult to come by, said Krista Jenkins, a professor of political science at Fairleigh Dickinson University. But one recent poll conducted by ALG Research and sponsored by New Jersey Working Families suggested that while 61% of voters are undecided ahead of the Democratic primary, those who have made up their minds plan to vote for Kennedy by a relatively wide margin — 21% to Harrison’s 8%.

The Kennedy name in New Jersey simply goes a long way, says Alan Steinberg, a close observer of the state’s political scene and a columnist for Insider NJ who has spent time with Kennedy and admires her as a candidate.

“The Kennedys were always popular here,” Steinberg said, “and they always will be.”

Kennedy is aware of the power of her inherited surname. “There’s a beautiful legacy of social justice and service that I am humbled by,” she told JI.

But as she seeks elected office for the first time, Kennedy emphasizes that her own family’s history in New Jersey — her father, Jerry Savell, is a former local councilman — also guides her approach to politics.

“For me,” she said, “it’s been a lot about figuring out what my voice will be.”

When it comes to policy, her approach is relatively consistent with that of her husband, 52-year-old Patrick, son of the late Sen. Edward Kennedy and a prominent mental health advocate. Kennedy, who previously worked as a middle school teacher and now serves as the education director of the Kennedy Forum, a health care advocacy organization, believes that her background is relevant in light of the COVID-19 pandemic.

“Mental health was, at the very beginning, a big piece of what I hoped to talk about,” she said, adding that it has become even more important now that many vulnerable Americans have been forced into isolation.

Kennedy worries that the pandemic could also distract from foreign policy issues, such as tensions with Iran that have ramped up since early January, when Trump ordered the killing of Iranian Gen. Qassim Soleimani.

Though Kennedy views the Soleimani strike as reckless, she doesn’t hesitate to describe the Islamic Republic as “the leading state sponsor of terrorism” in her Middle East position paper. The congressional hopeful still finds other faults with Trump’s policies in the region, including his decision to pull out of the 2015 Iran deal as well as his Middle East peace plan, which did not include the Palestinians in its conception.

Kennedy allowed that the president “has worked to be a friend to Israel,” but she believes his reliance on unilateralism has been misguided. “He doesn’t have the kind of leadership style that, I think, can yield the best results.”

The Kennedy family has long enjoyed a strong bond with the Jewish state — John F. Kennedy helped establish that relationship as the first American president to sell anti-aircraft missiles to Israel — and the Kennedy of this generation would seem to extend the tradition, even if she does not seem to approach the topic with the same level of detail that she discusses mental health and education.

But the congressional hopeful has put forth some policy proposals. She supports a two-state solution, for example, that respects Israel’s security as well as Palestinian self-determination.

“I will oppose unilateral actions taken by either Israel or Palestine that make it more difficult to reach a negotiated peace,” she writes in her position paper. “That includes standing up to Palestinian leaders who continue to embrace terrorism, employ the rhetoric of violence, and put both Palestinian and Israeli lives at risk. That also includes speaking out against the expanded occupation or creeping annexation of the West Bank.”

If elected, Kennedy told JI that she would work to ensure that the U.S continues to provide aid to Israel — she opposes the Boycott, Divestment and Sanctions Movement — while also advocating to restore aid to the Palestinians.

“By taking steps to alleviate suffering,” Kennedy says, “we can lay the groundwork for a diplomatic solution that improves Israeli security, eases the blockade, and ultimately incorporates Gaza into negotiations toward a two-state agreement.”

In her comments to JI, Kennedy expressed a strong desire to build on the U.S.-Israel relationship, whose significance, she said, has only increased amid the coronavirus pandemic.

“This pandemic is a great example of why we can’t operate just on our own, independently,” she said, “that we need to continue to build relationships and reach out to our allies.”

As the primary looms, it remains to be seen how the pandemic will affect more local concerns, and what role it will play in voter turnout.

Though experts say that Kennedy and Harrison have similar policy approaches, Kennedy has framed her campaign as the more progressive of the two, according to Debbie Walsh, director of the Center for American Women and Politics at Rutgers University.

That could help Kennedy in the lead-up to the general election, Walsh told JI, as progressive Democrats are usually more energized to turn out and vote in primaries.

If Kennedy gets the chance to face off against Van Drew — whose campaign manager did not respond to multiple requests for comment — she will be vying for a seat in a traditionally Republican district, albeit one that went for President Barack Obama in 2008 and 2012.

Kennedy believes her connection to the area — and her intimate understanding of its history — gives her an advantage. “I feel an urgency,” she said. “I’m very concerned about our community.”