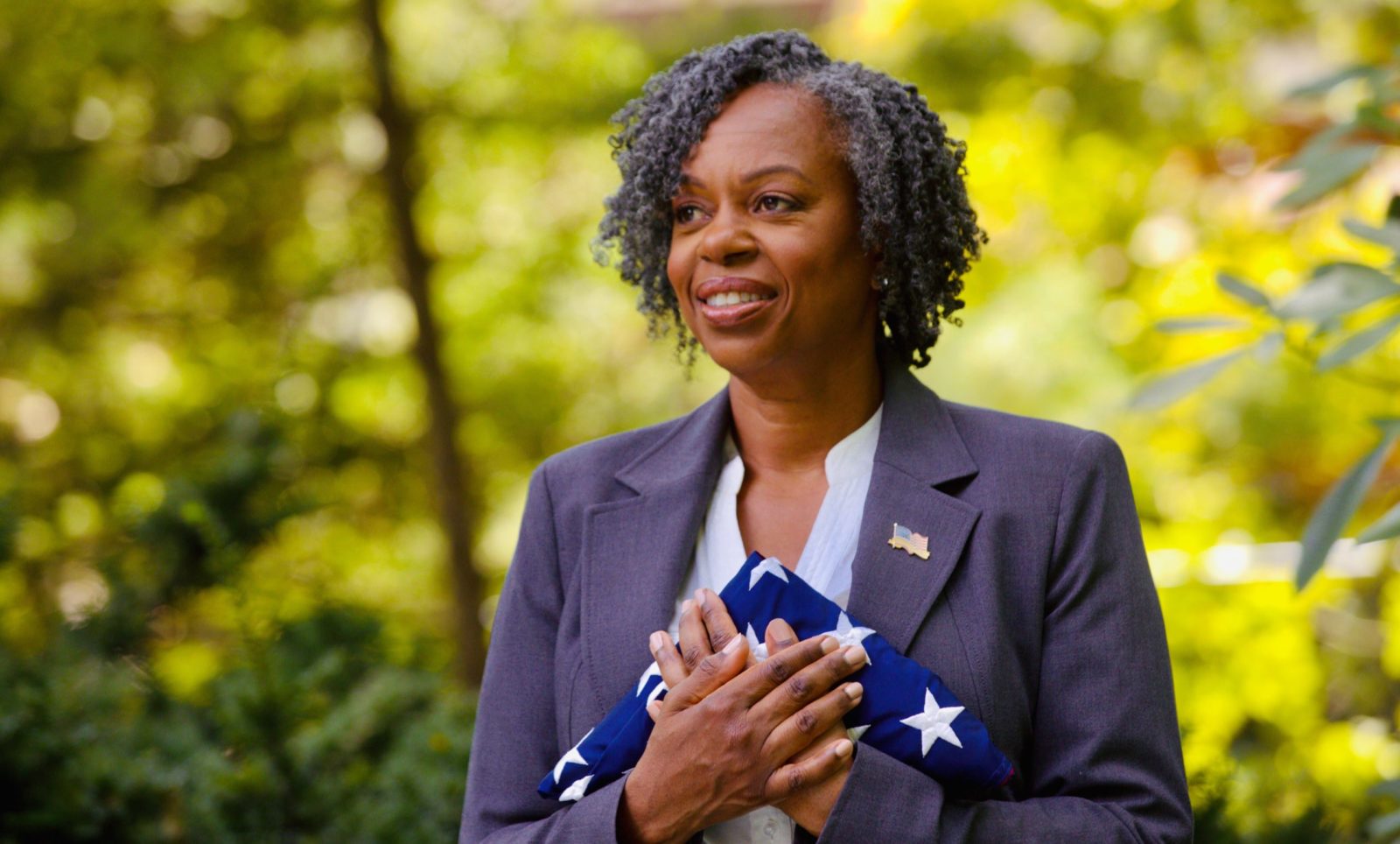 Does Army veteran Jackie Gordon have what it takes?

The odds were not in Jackie Gordon’s favor when she announced her plan last year to challenge Rep. Peter King (R-NY) in New York’s 2nd district.

Gordon’s strong resumé notwithstanding — Army veteran, guidance counselor, public servant — King, who assumed office in 1993, is an institution in the 2nd district, a historically conservative enclave on Long Island’s South Shore that includes parts of Nassau and Suffolk Counties.

But the Democrat’s chances vastly improved just six months later, when King, 76, said he would retire at the end of his term, citing a “toxic” political atmosphere in Washington. Though King endorsed Republican New York Assemblyman Andrew Garbarino, who won the June 23 GOP primary, the congressman’s imprimatur may not be enough to give his party’s candidate the edge in November.

The Cook Political Report has rated the election a “toss-up,” while the Democratic Congressional Campaign Committee (DCCC) has put Gordon on its “red to blue” list in an effort to expand its majority in the House. “Jackie’s servant-centered leadership will serve this district well, and as her campaign grows stronger, she is well-positioned to flip this district in November,” Rep. Cheri Bustos (D-IL), who chairs the DCCC, told JI in a statement.

Leslie Feldman, a professor of political science at Hofstra University, said much the same, arguing that Gordon, who won the Democratic primary with nearly 73% of the vote, could reasonably expect to eke out a win against Garbarino in the open-seat race. “Could she have won against Peter King? Probably not,” Feldman mused. “But could she win against someone who’s pretty much unknown? I think it’s possible.”

Despite the challenges posed by the pandemic, which has hobbled traditional campaign strategies, Gordon seemed confident about her prospects in a recent interview with Jewish Insider. “I was campaigning for a little while before the pandemic hit, and then it did, so I do what I often do — rely on my military training,” Gordon said bluntly. “In the military, what we do is adapt and overcome. We take what we’re given and we make the best of it in order to accomplish the mission.”

The 55-year-old candidate — who is also a certified yoga instructor — contends that the district is ready for a reset. “I think the tides are changing toward folks wanting their representatives to look more like them,” said Gordon, who was born in Jamaica and raised in Queens. “People want representatives who live like them, because then they will understand the challenges that they face.”

Gordon said she is running for Congress for the same reasons that King seems to have bowed out. “I see that Washington is not working for regular, middle-class folks,” she told JI. “We need representatives who are willing to sit down with Democrats and Republicans alike, and create solutions for voters in their districts. We see that that’s not happening. There’s too much gridlock and congestion.”

It’s a smart message for a Democrat to latch onto in a Republican stronghold, given that it takes aim at both parties, but it also appears to be genuine. “In my lived experiences in the military and government and education, I have often worked and served with folks who may or may not have been like me,” Gordon explained. “When I was deployed, I would look to my left and my right and never once asked any of my comrades if they were Democrat or Republican, because that didn’t matter.”

“It’s the same approach that I take in any job that I have,” she added. “It doesn’t matter who’s around me. I’m working with you, and we’re going to accomplish the mission.”

Gordon has always been singularly focused. She joined the Army in her early 20s after seeing a commercial and convinced her best friend to go down to the recruiting station with her. “Marketing does work,” she joked. Though her friend “chickened out,” Gordon went through with it, working her way up to the rank of lieutenant colonel after 29 years of service, during which she was deployed to Germany, Guantanamo Bay and Iraq. Her last assignment, in 2012, was to Afghanistan. She retired from the Army Reserve in 2014.

Throughout her Army service, Gordon also worked in New York’s public school system, retiring from her role as a guidance counselor at Wilson Tech on Long Island in January — along with her position as a town council member in Babylon — so she could focus on her campaign.

“I grew up in the military at the same time I was working my way through the education system and working with youngsters,” said Gordon, whose daughter is now stationed in Europe as a United States Air Force captain. “And that same fervor that I got from the military, and all the lessons that I learned from the military, I was able to take that, and as that groomed me and molded me and codified the values that my parents taught me, like honesty and trust and integrity, I was able to pass that on to thousands and thousands of young people in New York public schools.”

Gordon believes it was a mistake for President Donald Trump to leave the Joint Comprehensive Plan of Action (JCPOA). “Ultimately, all of us should want to make sure that Iran has no nuclear capabilities, because nuclear war is not good for anyone,” she said. “With that said, I would be in agreement for us to rejoin the JCPOA. It wasn’t perfect. But I do believe that we need some kind of mechanism to monitor events.”

Still, Gordon was hesitant to directly criticize Trump in the interview with JI. When asked about the president’s decision to assassinate Iranian General Qassim Soleimani, Gordon was somewhat coy.

“Our main focus is on safety in the region, and ultimately in the world,” she said, reiterating a previous point without directly mentioning the commander in chief. “It’s important for the U.S. to maintain a presence in the Middle East and for us to continue on to just create a space for diplomatic dialogue with Iran, and the objective, of course, is always to make sure that there are no future armed conflicts.”

On the Israeli-Palestinian conflict, Gordon took a firm stance, arguing that a two-state solution was the best way to achieve peace. “I believe that it has to be a two-state solution with the stakeholders — the Israelis and the Palestinian Authority — being at the table to create that solution so that they can have ownership,” said Gordon, who has not been to Israel but said she would like to go if elected to Congress. “I love to learn about other cultures and ethnicities,” she said, “and I would really love to be on the ground to really understand what’s happening in Israel.”

Todd Richman, co-chair of Democratic Majority for Israel — whose sister organization, DMFI PAC, recently endorsed Gordon — said the candidate’s experience in the Middle East gives her unique insight into issues of concern to pro-Israel Democrats. “As a combat veteran who has served in the Middle East, she has a key understanding of the importance of the U.S.-Israel relationship, and its importance not just for Israelis’ security but for our security as well,” he said.

Richman acknowledged that King had a strong pro-Israel record, but said he was pleasantly surprised by Gordon’s understanding of the U.S.-Israel relationship. “She’s the type of Democrat that this country will look to to lead the party in the future,” he declared. “She’s supportive of healthcare, education [and] economic relief for those that are less fortunate, but at the same time, she’s a strong supporter of veterans, and she’s a strong supporter of foreign policy. These are the things that we need to ensure that our elected officials care about.”

That profile will likely endear Gordon to voters in the district as she prepares to go up against a Republican endorsed by the outgoing incumbent. In many ways, the 2nd congressional district is a “microcosm” of Long Island, which has been trending blue in recent years, according to Craig Burnett, a political scientist at Hofstra University.

Without King’s “strong name recognition,” Burnett told JI, “I would consider the district to be a true toss-up. With 2020 likely to be a high turnout election and another good year for Democrats, there may be enough Democratic votes to subsume the slight Republican advantage in the district.”

Garbarino, for his part, was optimistic about the election in a written statement to JI. “With more than 64 local endorsements from local elected officials, the support of Congressman King, law enforcement and labor unions, as well as the confidence of so many working class Long Island families who continue to donate and volunteer their time,” Garbarino said through a spokesperson, “I look forward to working hard over the next couple of months, taking nothing for granted, to earn the opportunity to serve New York’s 2nd Congressional District in the 117th Congress.”

Still, Gordon’s ecumenical message could help her turn the district blue this cycle. “In order to change government, you have to change those who govern,” Gordon said. “You have to have folks who are willing to work to get the job done, and until we get representatives who are willing to do that, we’ll never see a change in that gridlock.”

“I will serve every human body in this district, from Nassau County to Suffolk County and everyone in between, because that is my responsibility,” she added. “I will never talk radical left, far right. I hate that divisive talk.”