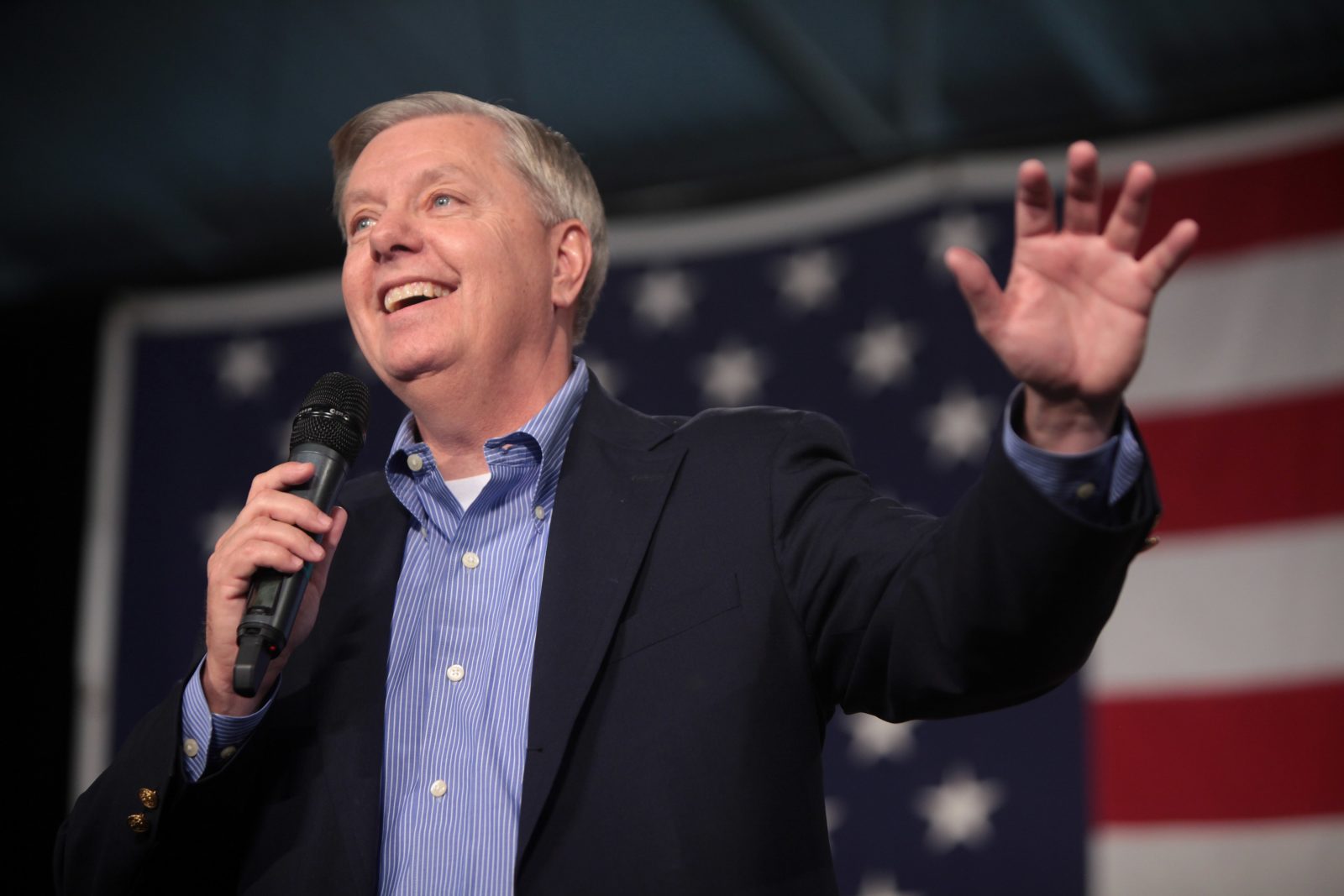 Lindsey Graham is taking nothing for granted

The South Carolina senator is facing a tough reelection challenge, but he is confident he can hold on past November

Lindsey Graham, the outspoken longtime Republican senator, is facing one of his toughest reelection bids as he prepares to go up against Democrat Jaime Harrison in November.

But the race is in South Carolina, after all.

Harrison, a rising star within the party’s ranks, will have to overcome steep odds if he hopes to unseat Graham in the deep-red state, but momentum has been trending in his favor: Recent polling suggests Harrison is in a statistical dead heat with Graham, whom he has consistently outraised. On Monday, The Cook Political Report moved the race from “likely” to “lean Republican.”

Still, while Graham acknowledged the formidability of his opponent, he seemed confident during an interview with Jewish Insider on Tuesday afternoon that he would hold onto the seat.

“I’m taking it seriously, but I know my state,” said Graham, characterizing the polls as “bogus.”

“I’m structurally in good shape. We’re raising money — the more the better.” Graham has so far raised about $26 million for his reelection effort, according to the latest filings from the Federal Election Commission. “My opponent’s outraising me every quarter, but money’s not going to determine the outcome,” he added. “My opponent’s just on the wrong side of a lot of issues.”

Israel, according to Graham, will be a “defining issue” in the race due in part to the state’s sizable evangelical Christian population. “People in South Carolina have an affinity for our friends in Israel, and they get the idea that the people who want to destroy Israel also want to destroy us — and the Democratic Party is adrift, unfortunately,” Graham told JI. “There are still pro-Israel Democrats, but I would put my record of supporting the State of Israel up against anybody in the Congress.”

Graham, to put it mildly, does not regard Harrison as a pro-Israel Democrat. “Bottom line is, he’s going to raise about $50 million, and it’s coming from the most liberal people in the country that are antagonistic toward the State of Israel,” Graham said of his 44-year-old opponent, who is the associate chairman of the Democratic National Committee and has raised nearly $30 million, per the FEC.

“The difference between me and my opponent on the U.S.-Israel relationship is, I’m known, I’m reliable, and I think, at best, he’s suspect,” Graham told JI.

Guy King, a spokesperson for Harrison’s campaign, disputed Graham’s assessment in an email statement. “Jaime is committed to maintaining a strong relationship with our most dependable Middle East ally, Israel.” He added: “The U.S.-Israel relationship has always transcended presidents, prime ministers, and political parties. For the bond between our two countries to remain strong, it must remain bipartisan and nonpartisan. As a senator, Jaime will be determined to maintain and strengthen this vital alliance.”

The senator, though, isn’t buying it, taking aim at Harrison’s view that the U.S. should rejoin former President Barack Obama’s Iran nuclear deal, which Graham believes drove a wedge between the parties on Israel. “One of the things that has been a pretty sacrosanct thing is the U.S.-Israel relationship,” he said. “Both parties were pretty strongly supportive of U.S.-Israel, and the Iran agreement kind of broke us apart.”

“What did I learn growing up in the back of a bar in South Carolina? If somebody is threatening to cut your throat, don’t buy him a knife,” said Graham. “The actions of the ayatollah convinced me that if he had a nuclear weapon, he would use it, and that he’s trying to get a nuclear weapon, not a peaceful nuclear power program.”

Harrison’s spokesperson defended the candidate’s support for the deal. “Jaime believes preventing Iran from gaining a nuclear weapon is paramount to protecting both Israeli and American security,” King told JI. “Jaime feels the Joint Comprehensive Plan of Action was an effective measure to discourage Iran’s nuclear program. He also believes the United States’s withdrawal has severely weakened our international credibility and increased incentives for Iran to accelerate its nuclear program.”

For his part, Graham supports President Donald Trump’s decision to invoke the “snapback” mechanism that would allow the U.S. to reimpose U.N. sanctions on Iran that were lifted as part of the nuclear deal — a move that was rejected on Thursday by Britain, France and Germany.

“I think it’s time to snap back,” Graham said. “I mean, they took the money and they empowered their military. They haven’t built schools and hospitals, roads and bridges in Iran. They’ve been funding Hezbollah, helping them get an ungodly amount of rockets, precision-guided munitions aimed at Israel. They’ve been helping Hamas, trying to undercut the peace agreement between the UAE and Israel.”

That peace accord, Graham added, was a historic accomplishment by the Trump administration. “The relationship between Israel and the UAE is going to be breathtaking, transformative, because the two most innovative countries in the Middle East are joining forces, and I think it’s going to lead to more relationships between the Arab world and Israel,” said Graham, who on Thursday introduced a bipartisan resolution supporting the deal alongside Democratic Sens. Ben Cardin (D-MD) and Bob Menendez (D-NJ).

“When it comes to Israel, we need to be bipartisan,” said Graham, who touts his record pushing for the U.S. to recognize the Golan Heights as sovereign Israeli land as well as his sponsorship of the Taylor Force Act, which witholds U.S. aid to the Palestinian Authority on the condition that Ramallah ends payments to families of terrorists.

Graham is concerned that the progressive wing of the Democratic Party will make it more difficult to forge a bipartisan consensus on Israel going forward. “If we somehow lost the Senate,” he said, “it would be no stopping the liberal agenda coming out of the House and the ‘Squad,’” the four Justice Democratics-backed congresswomen who were elected to Congress last cycle: Reps. Alexandria Ocasio-Cortez (D-NY), Ilhan Omar (D-MN), Rashida Tlaib (D-MI) and Ayanna Pressley (D-MA).

“The four House members are about as antagonistic to the State of Israel as anybody I’ve met in recent memory in elected politics,” Graham said.

“I’m just hoping that younger Democrats will not be afraid to speak up, because Israel provides us with more actionable intelligence regarding terrorism than any country on the planet,” he added. “When they develop military breakthroughs, hardware, military innovation, they share it with us. I mean, it’s just a very beneficial relationship with the Department of Defense, very beneficial relationship with our intelligence community, and a good trading partner. So I just, I’m hopeful that young Democrats will not be cowed into being shy about supporting Israel.”

“I’m trying to make foreign policy a real issue in this election because I believe it is,” Graham told JI.

Harrison, who has been endorsed by J Street, did not explicitly back the Taylor Force Act in an interview with JI this past spring, but his spokesperson told JI this week that Harrison supports it: “The Taylor Force Act is the law of the land, and Jaime is glad it is the law of the land.” (Harrison recently laid out his views on other issues of importance to the Jewish community in a candidate questionnaire for JI.)

In the late March interview, Harrison acknowledged that Graham has a “strong record” when it comes to Israel, but believes voters will be turned off by the senator’s “flip-flopping” on Trump. At the beginning of Trump’s term, Graham was initially cold to the president, but has since become one of his closest confidantes.

Graham was unabashed in his praise for Trump while speaking with JI. “I don’t think there’s been a better friend to the State of Israel since Harry Truman than Donald Trump,” he declared, cautioning that those who believe in a strong U.S.-Israel relationship should be worried by the Democrats’ efforts to flip the Senate this year. “We’ve got to fight for the Senate,” Graham told JI, claiming that a Republican majority was “the insurance policy against the most radical foreign policy and economic agenda in modern history.”

“I’m confident that if Democrats had the House, the Senate and White House, they’d change the filibuster rules in the Senate,” Graham said. “It’d be a majority-rule body, and that would be very bad for the country.”

“Watch these races,” said Graham, who has been trying to drum up enthusiasm for some of his more vulnerable colleagues in the upper chamber, including Sens. Cory Gardner (R-CO) and Joni Ernst (R-IA).

But the three-term senator is also mindful that his own seat is more vulnerable than it has been in previous elections.

“I’m taking nothing for granted.”