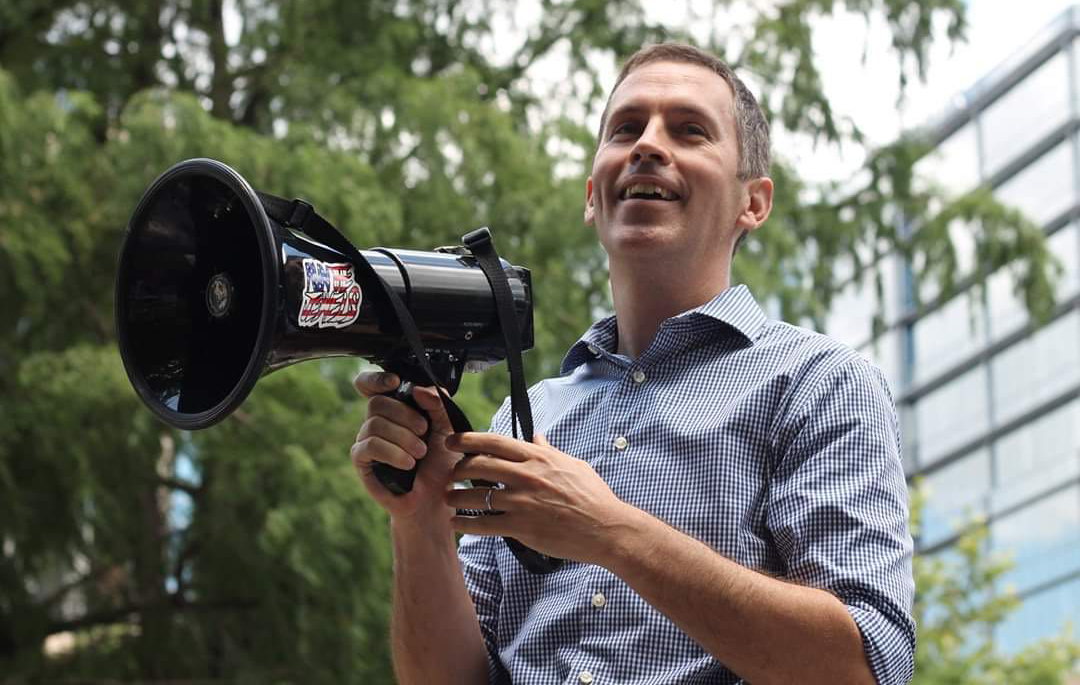 After a narrow loss in 2018, the progressive Democrat is hoping to beat longtime Rep. Mike McCaul this time around

Mike Siegel is aware that his status as a progressive Democrat with a Jewish last name sets him apart as he runs for Congress in Texas’s 10th congressional district — a traditionally conservative swath of suburbia that stretches from Austin to Houston.

“This is definitely a predominantly Christian and church-going community,” Siegel told Jewish Insider in a recent phone interview from his home in Austin, where he is sheltering in place with his wife and two kids during the coronavirus pandemic. “I think folks do see that I’m a little different.”

“I don’t think it prevents me from succeeding,” added the 42-year-old former civil rights attorney who is now mounting his second campaign to unseat Rep. Mike McCaul, the Republican congressman who has represented the district since 2005. “But it changes how people view me.”

His confidence isn’t unearned. In the last election cycle, Siegel lost to McCaul by just four percentage points. It was an unexpectedly slim margin that surprised the majority of observers who believed the district — previously represented by former President Lyndon B. Johnson but redrawn in 2003 in a way that favored Republicans — was a perennially red one.

“What Siegel showed back in 2018 is that, with the right conditions, a Democrat can win in Texas 10,” said Mark P. Jones, a professor in the department of political science at Rice University in Houston. “This is a race to be watched.”

Siegel’s relative success drew other Democratic challengers this year. He failed to secure a majority of the vote on Super Tuesday and is now advancing to a head-to-head primary runoff against Pritesh Gandhi, a popular pediatrician and activist who represents a formidable obstacle on Siegel’s path to the nomination, having raised more than $1 million relative to Siegel’s $664,000, according to the Federal Election Commission.

Still, Siegel won by 11 percentage points in the March 3 primary — a margin that, he avers, gives him the edge in the July 14 runoff.

“I’ve been doing this work for two-and-a-half years as a returning candidate,” said Siegel, who has notched endorsements from a diverse array of groups including the Houston Chronicle, the A.F.L.-C.I.O. and the Working Families Party. “I’ve built a strong foundation across the district.”

Jones agreed with Siegel’s self-assessment, arguing that the candidate was the “strong favorite” to advance to the general election while adding that beating McCaul would be difficult.

Born in Oakland, California, Siegel was raised in what he described as a “mixed-religion” family. His mother, he said, is a “fourth-generation Californian WASP,” while his Jewish father is from New York. “I would say the common values were social justice, like, doing good in the world,” he said. “Even if we are doing OK as a family, even if we’re economically stable, it’s our duty to help others.”

He matriculated at Brandeis University in 1995, the year then-Israeli Prime Minister Yitzhak Rabin was assassinated. “I didn’t know much about it at all, but the people in the dorm across from me at Brandeis were very concerned, and there were vigils and rallies,” he remembered.

“Looking back at it now,” he said wistfully, “that seems like the end of the peace process.”

Siegel went on to work as a public school teacher for Teach for America in Houston, Oakland and Brooklyn, where he lived during the September 11 attacks, the aftermath of which influenced him to become a lawyer.

“I was actually very concerned about the Patriot Act and some of the attacks on the immigrant community,” he said, “folks being disappeared in these detention centers, and the work of [former U.S. Attorney General] John Ashcroft to demonize whole sectors of our country.”

He moved to Texas about eight years ago so his wife, Hindatu, could be closer to her family.

Siegel feels deeply connected to his Jewish heritage. In the late 1980s, he traveled with his father to a rural town outside Minsk, in Belarus, where his ancestors lived before the Holocaust. “Unfortunately, most of us did not survive the Holocaust, in part because countries like the United States rejected Jewish people seeking refuge,” Siegel writes in a position paper he provided to JI.

“To many in our family, Israel represents the sanctuary that other nations refused to provide.”

Siegel believes that he brings a unique approach to the progessive agenda as a Jew who sympathizes with pro-Israel causes while also advocating for Palestinian self-determination. “I bring this part of my identity,” he said.

“I can criticize the approach of the government without being accused of being antisemitic because I’m part of this community,” added Siegel, who has never been to Israel but plans to go if he is elected. “There are folks on the left that might be less careful about how they speak about some of these things. But I think it’s important to have progressives in the United States who can see both sides of this issue.”’

To that end, Siegel rejects President Donald Trump’s unilateral approach to achieving peace between Israelis and Palestinians and argues that the U.S. should rejoin the Iran nuclear deal. He supports continued aid to Israel while also advocating for renewing aid to the Palestinians along with the United Nations agencies that support Palestinian refugees.

“We need to have accountability for how we spend our money,” Siegel said. “One concern I have is that a lot of the conversations about accountability for foreign aid focus only on Israel. We don’t talk about how Saudi Arabia spends its money, or Egypt, or some of these other countries that receive U.S. aid. So certainly, I would like to adopt some common principles for how we distribute foreign aid and military aid. And those should be applied equally.”

Siegel views himself as a rare kind of bridge-builder. “My wife is from a northern region in Nigeria that’s predominantly Muslim,” he said. “I feel like I’m someone who can communicate with a lot of different sides of this question, of this conflict.”

He has proven himself, at least, as a candidate who can appeal to constituents in a historically red district that has trended purple in recent years. Siegel, who supports Medicare for All and the Green New Deal, says the area isn’t as monolithic as it may seem — and that his progressive views haven’t alienated him from voters.

Brandon Rottinghaus, a professor of political science at the University of Houston, backed up Siegel’s contention. “These districts are no longer the red belts to the blue urban core,” he said. “Suburbs today are swing areas and Republicans are nervous about a wide-scale rejection of President Trump.”

Nevertheless, Rottinghaus noted that Siegel faces an uphill battle ahead. “A known quantity like Siegel, taking a second bite at the apple, might have better luck in a presidential year, but this is not a normal presidential year,” he said. “The unusualness of the election complicates Siegel’s hopes to win.”

The congressional hopeful will be going up against one of the wealthiest members of Congress, who could easily outspend Siegel if he feels threatened in any way. (McCaul’s campaign did not respond to a request for comment.) Siegel also acknowledges that McCaul appears to be campaigning more aggressively than he did two years ago, when the upstart progressive represented less of a threat.

Still, Siegel is confident that he can turn the district blue in November. “I basically have built a coalition that can beat McCaul,” he said.