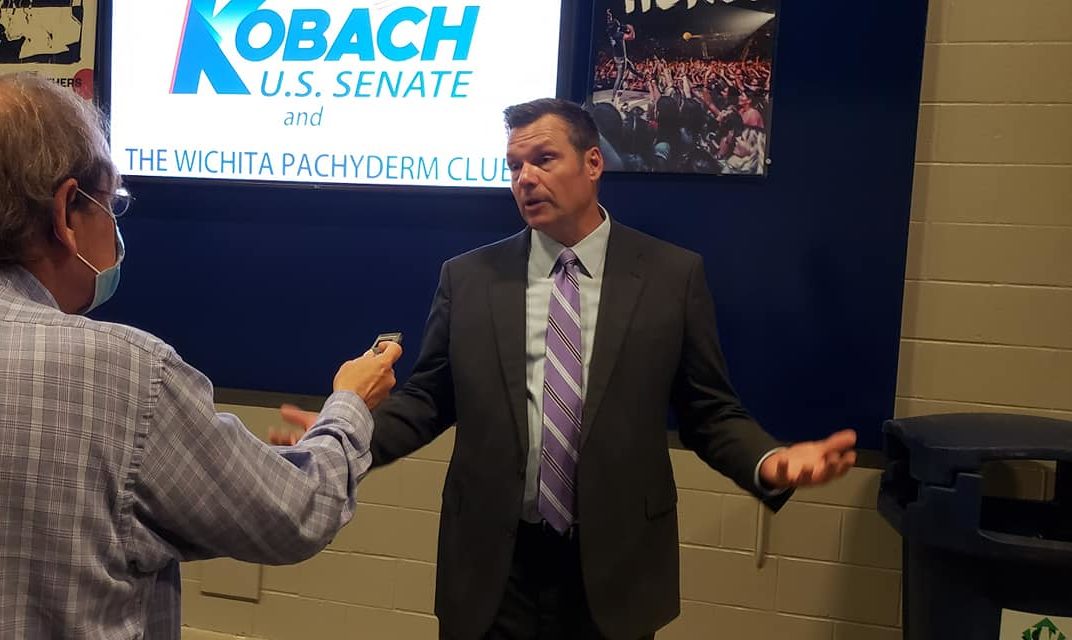 Senate GOP primary comes down to the wire in Kansas

He is also a leading contender in today’s crowded Senate primary in Kansas, featuring no fewer than 11 Republican candidates jockeying to succeed retiring Sen. Pat Roberts (R-KS). Kobach’s presence in the race has put extremism experts on alert.

“It’s just a very consistent record that he takes these far-right, nativist, anti-immigration views,” said David Neiwert, the author of Alt-America: The Rise of the Radical Right in the Age of Trump, who kept a close eye on Kobach’s trajectory when he worked as a correspondent for the nonprofit Southern Poverty Law Center. “This is Kris Kobach’s identity.”

The Anti-Defamation League is similarly wary of Kobach, a 54-year-old immigration hardliner with degrees from Harvard, Yale and Oxford who currently writes a column for Breitbart.

“Kris Kobach is an anti-immigrant bigot who spoke in 2015 at an event organized by a publisher that routinely elevates the writings of white supremacists,” an ADL spokesperson told Jewish Insider, referring to Kobach’s appearance at an event hosted by the Social Contract Press, founded by white nationalist John Tanton. “He has also championed the baseless conspiracy theory about rampant voter fraud in the 2016 election, and has been credibly accused of promoting legislation that engages in racial profiling, including Arizona’s controversial ‘Show Me Your Papers’ law.”

Kobach’s campaign did not respond to requests for an interview.

Heading into Tuesday’s primary, political scientists told JI that with little polling data available, it’s unclear who currently leads the Republican field, though Rep. Roger Marshall (R-KS) has emerged alongside Kobach as one of the stronger candidates in the race.

“The best guess is that it’s some kind of coin flip, probably between Kobach and Marshall,” said Patrick R. Miller, a professor in the department of political science at the University of Kansas.

Though Kobach has been gaining momentum, one of his weak spots is his “poor fundraising,” according to Miller. Kobach, who in 2004 unsuccessfully ran for Congress in Kansas’s 3rd congressional district, has raked in approximately $940,000, according to the Federal Election commission — far less than Marshall, who has raised $2.7 million.

Still, Kobach’s campaign has been buoyed by billionaire tech mogul Peter Thiel, who has pumped $850,000 into a super PAC supporting the insurgent candidate.

Kobach has also garnered unexpected support from a separate, Democratic-linked super PAC, which is spending millions of dollars to run ads that characterize Kobach as a more committed conservative than Marshall — the subtext being that Democrats view Kobach as the weaker Republican candidate in the general election.

Some establishment Republicans seem to agree, experts say. “They’re definitely afraid Kobach will win the nomination,” Burdett Loomis, a political scientist at the University of Kansas, told JI. “If Kobach wins, the seat immediately turns into a tossup.”

Marshall, for his part, has also benefited from some outside spending, though the GOP was initially skeptical of his candidacy: Senate Majority Leader Mitch McConnell publicly advocated for former senator and current Secretary of State Mike Pompeo to run for the seat, despite repeated rejections from Pompeo. Now, a McConnell-aligned super PAC is spending $1.2 million to boost Marshall.

“He might be the rickety tank they’re reluctantly riding into battle, but it’s the only tank they have,” Miller said of Marshall, 59, who has represented Kansas’s 1st congressional district since 2017.

Gavriela Geller, director of JCRB/AJC Kansas City, an organization that merged the regional office of the American Jewish Committee and the local Jewish Community Relations Bureau, said that Marshall has been receptive to meeting members of the Jewish community in Kansas and hearing their concerns.

“We would hope that whoever wins the Senate seat will be similarly receptive to working with us and addressing the multiple sources of rising antisemitism in this country, including a troubling increase in white nationalist rhetoric and violence, which is of particular concern in our region,” Geller told JI, noting that she could not endorse any candidate in the race because her organization is nonpartisan.

Despite pressure from some party leaders to endorse Marshall, President Donald Trump also appears set on staying out of the primary. Kobach, a Trump ally, had previously been considered for positions as Trump’s “immigration czar” as well as secretary of homeland security.

Another Republican candidate, Bob Hamilton, a former plumbing company owner well-known in the state for ads that featured his name, has shifted the dynamics of the race in recent weeks by spending more than $2 million of his own money on advertising. Experts say that won’t put him in the lead, but Hamilton’s efforts to boost his profile could pull support away from the other candidates and give one of them an edge.

The competing ads have made for a confusing situation for Republican voters. “People aren’t talking much about policy,” said Loomis.

On the other side of the aisle, State Senator Barbara Bollier is running essentially uncontested for the Democratic nomination. She became known in the state for switching her party affiliation from Republican to Democrat at the end of 2018, and has built a reputation as a centrist candidate.

“She’s proving to be a more credible candidate and a stronger candidate than people thought she would be,” said Miller, “and I think Republicans would be foolish to discount that.”

A June 2 poll found Bollier in a statistical dead heat with Marshall, Kobach and Hamilton in hypothetical general election matchups.

A May 28 poll, however, found Marshall 11 points ahead of Bollier, and Bollier and Kobach tied. Bollier has stunned observers in the state, Miller said, by far outraising each of her Republican opponents in the race: She’s already raised $7.8 million, with more than $4 million still on hand.

But more surprising, perhaps, is the fact that Kobach has emerged as an ostensible frontrunner in Kansas’s packed Republican primary field. “It’s a Republican state, but historically it has not been a far-right Republican state,” Loomis said.

When the votes are counted, Kansans will find out whether that formulation holds up.