After her own experience, the ‘PBS Newshour’ journalist sought to compile resources for women with questions about breast cancer 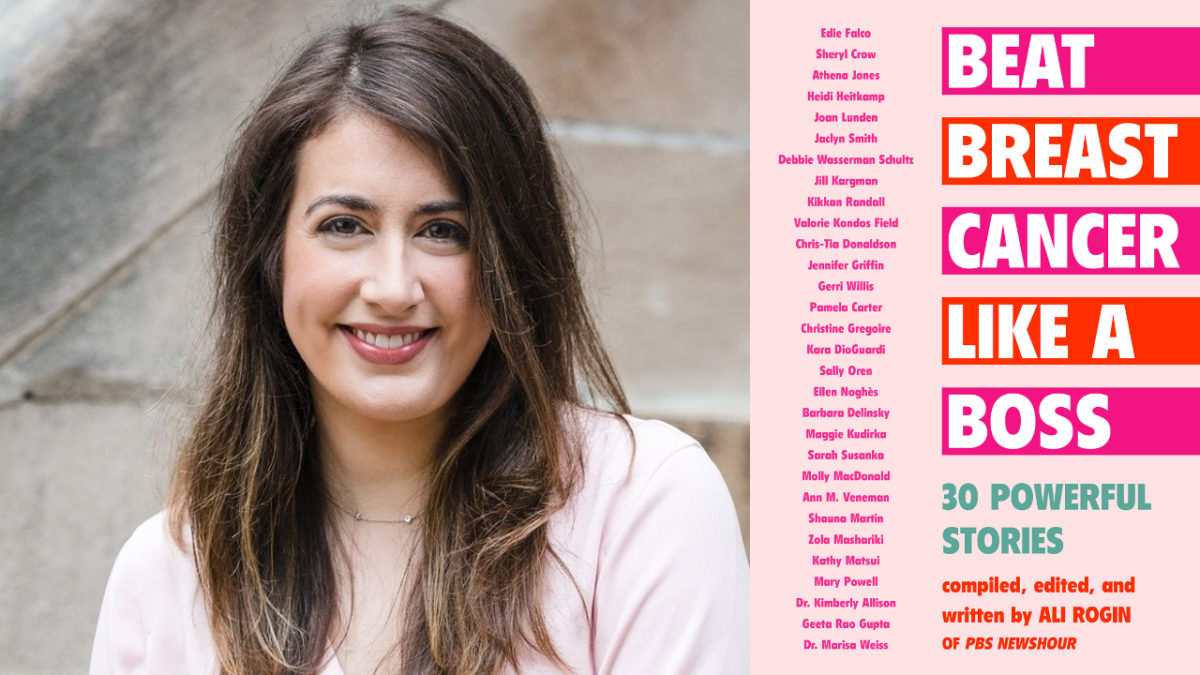 Ali Rogin and her new book, 'Beat Breast Cancer Like a Boss.'

When journalist Ali Rogin was told by her doctor that she tested positive for the BRCA-1 gene — which significantly increased her risk of breast and ovarian cancer — she didn’t quite know where to turn.

“I really wanted to consume as many accounts as I could of people who went through the same experience that I did,” Rogin told Jewish Insider in a recent interview. “And there simply were not that many books out there that dealt with the experiences that I went through.”

And so Rogin, a foreign affairs producer at “PBS NewsHour,” set about creating one. Beat Breast Cancer Like a Boss, which was released earlier this month, shares the first-hand experiences of 30 women at different stages of their fight with the disease, which is the second leading cause of death among women worldwide.

Some of those interviewed, like Rogin, are “previvors” — women who, usually through some mix of family history and genetic testing, learn that they have either the BRCA-1 or BRCA-2 gene, which significantly elevates their risk of getting the disease. (BRCA is an abbreviation for breast cancer.)

Those who learn they are more at risk are likely able to take steps — often a mastectomy and the removal of one or both ovaries — to lessen their odds of getting breast and ovarian cancer. Rep. Debbie Wasserman Schultz (D-FL) shared her story of undergoing a prophylactic double mastectomy during a February congressional recess after learning that she, like 1 in 40 Ashkenazi Jewish women, was a carrier for the gene.

Others were diagnosed once a lump was discovered and biopsied — and in some cases, after the cancer had already spread to other parts of their body.

The women interviewed throughout the book range from actresses to musicians, authors, businesswomen and politicians. Some were contacts Rogin had amassed during more than a decade as a journalist. Others she reached through persistent cold-calling. She was able to tap into family connections to reach women in the entertainment industry — her father, Max Weinberg, is the drummer for Bruce Springsteen’s E Street Band.

One of the women Rogin interviews is Sally Oren, who was diagnosed with breast cancer while her then-husband, Michael Oren, was serving as Israel’s ambassador to the United States. After learning of her diagnosis, Oren confided in a close friend, the wife of the Norwegian ambassador, who had gone through her own battle with the disease a year earlier and connected Oren with a group of diplomatic spouses who had all experienced or were in the middle of their own cancer fight.

“They were great,” Oren explained to Rogin. “You can be more intimate with people who are going through the same experience as you. And also, you can be irreverent. You can be funny. Sometimes, people don’t know how to behave [around people with breast cancer]. It’s hard for them. I don’t blame them, but they don’t quite know what to do with someone’s diagnosis. But we laughed together. There was an ease at being able to express yourself. And you’re seeing all these survivors. And that’s comforting.”

The actress Edie Falco, who was also interviewed for the book, told Rogin that when she was diagnosed, the doctor offered to connect her with other public figures who were discreetly going through the disease. (Falco did not go public with her battle until five months after she finished treatment.)

That kind of community, Rogin wrote, is common among survivors. “They give each other updates on what was happening in terms of their medical situations. But then they talk about anything else, anything and everything, they talk about travel and books they were reading and people they were meeting and what was happening in their children’s lives,” she wrote. “And in that way, it enabled the building of really, really strong personal and deep friendships. But it also provided an environment where women felt vulnerable enough to share their fears and their concerns about breast cancer.”

All of the women featured in Rogin’s book are alive today — except one. Longtime reporter Cokie Roberts, with whom Rogin worked at ABC News, succumbed to the disease in 2019 after a resurgence — a decade and a half after her first breast cancer diagnosis.

When Rogin interviewed Roberts in the summer of 2017, she didn’t know the news veteran was battling a recurrence of the disease. “When I interviewed her, I only asked her questions about her first battle with breast cancer, which had been many years prior. And so in my eyes, I was talking to someone who was a ‘breast cancer survivor,’” Rogin said. “I didn’t know that she was back in the fight. Her cancer had returned, when we were talking. And it was aggressive and it had spread to other parts of her body. And she was, when I spoke to her, she was very sick.”

Roberts’s death, Rogin told JI, was “devastating,” but it also forced her to readjust the way she viewed the fight against the disease.

“Beating breast cancer does not mean going into remission and remaining cancer-free for the rest of your life,” Rogin said. “That is an extremely limiting definition of beating breast cancer. And it also forces this binary proposition whereby, if you don’t beat breast cancer in that way, you have failed. That’s not fair. And it’s not accurate. And, to me, what beating breast cancer means in this book, when I talk about it, it means living every day with joy, and confidence, and defiance, even as breast cancer is always trying to ruin everything for you.”

In the months following the outbreak of the COVID-19 pandemic, hospitals and doctors’ offices have seen dramatic drops in the number of patients coming in for routine — or in some cases, lifesaving — medical visits.

“Preventative care has been put on the back burner as well trying to stay home and remain safe. But it’s actually never been more important,” Rogin told JI. “Unfortunately, there have been studies since the pandemic began that show people are being diagnosed with cancers at more advanced stages, because they’re not going in for routine screenings that can catch it earlier.”

The collection of women’s stories, each of which Rogin intersperses with background information and additional details, take you from initial doctors’ appointments and diagnoses to treatment, and then, lastly, what Rogin calls in each section “The Comeback” — how each woman’s life has changed.

Rogin’s own “comeback” is still happening. She made the choice, after finding out she was a carrier, to have a double mastectomy. Eventually, she told JI, she will have an oophorectomy to remove one or both ovaries, which will put her into early menopause.

“For me, the notion of going through those changes in my 30s is really, really scary. But at the same time, I greet it with optimism,” Rogin said. “My aunt passed away of ovarian cancer, so I know that this is a very real possibility in my life. And what’s worse than going into early menopause? Getting cancer. So the fact that I have this ability to hold up a crystal ball to my cancer future and make decisions based on that ability to see the future is incredibly empowering.”

Learning at such a young age that she carried the mutated BRCA gene has empowered Rogin to do what she can to educate women about their own risk factors — and encourage regular medical check-ups and testing.
“I want to use my experience to help others,” Rogin said. “I don’t want to be defined by my possession of this genetic mutation. But I’m totally cool being defined as somebody who has used challenges in her life to help others. I think that’s in the spirit of tikkun olam.”