New Jewish Insider poll gives incumbent Rep. Richard Neal a nine-point advantage over his opponent with less than a week before the primary 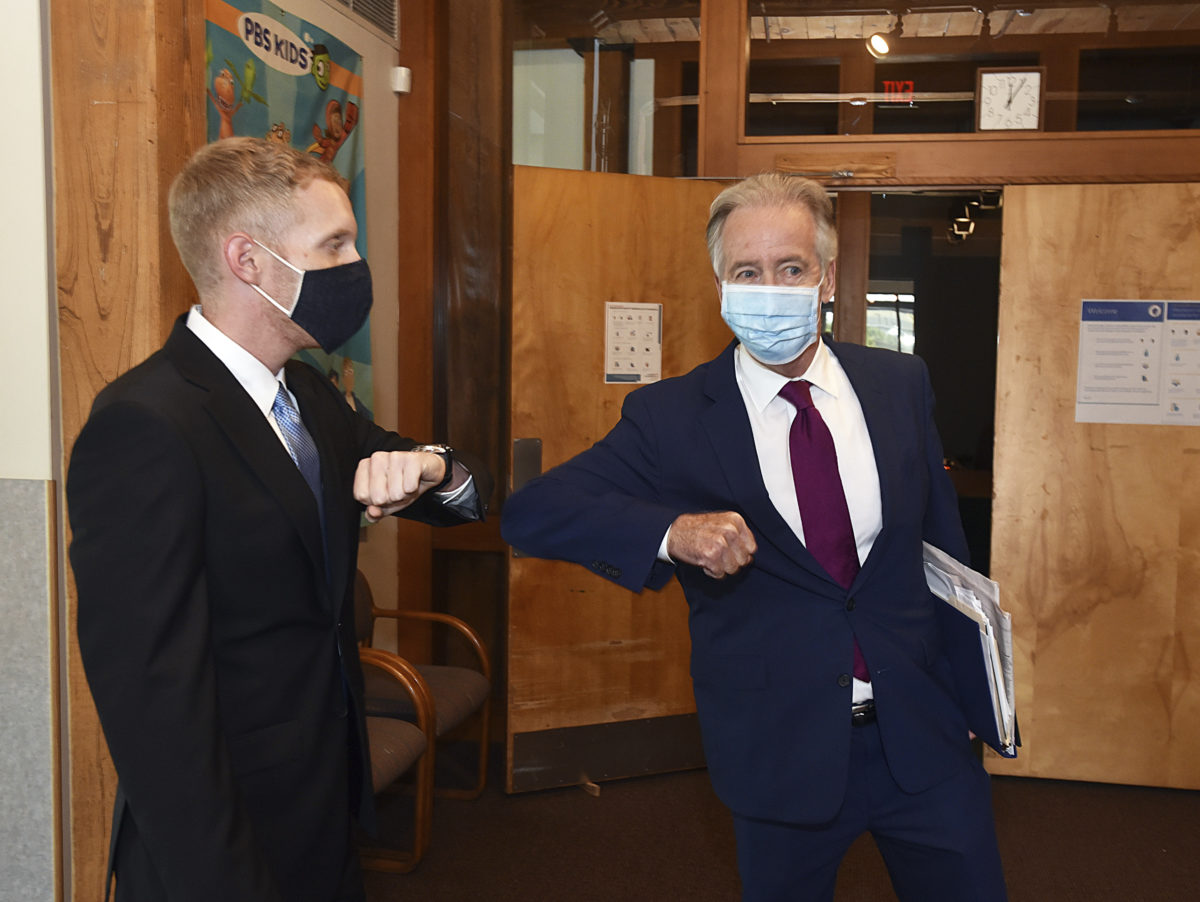 Rep. Richard E. Neal (right) bumps elbows with his challenger, Holyoke Mayor Alex B. Morse, before their debate on Aug. 17, 2020.

The poll, based on 518 voter surveys conducted by RABA Research on August 23 and 24, puts Neal on relatively comfortable footing with 49% of the vote, placing him outside the ±4.3% margin of error. Morse pulled in 40% of the vote among those surveyed, with 12% of likely voters reporting that they were “not sure” who they would choose.

At the same time, Neal’s failure to clear the 50% threshold could be a sign of trouble for him, as incumbents polling below 50% are often considered at risk of defeat.

In recent weeks, the contentious race has gained national attention as Morse, who is gay, became embroiled in a sexual misconduct scandal that nearly ended his run. But he was vindicated after the allegations put forth in a letter by the College Democrats of Massachusetts appeared to have been part of a scheme to derail Morse’s campaign in coordination with the state’s Democratic Party. Neal has denied any knowledge of such plans.

The controversy seems to have given Morse a boost, said Robert Boatright, a professor in the department of political science at Clark University in Worcester. “A lot of people outside Massachusetts rallied to his side on that, so the story got him more visibility, and my guess would be it helped him more than it hurt him,” he told JI.

“But at the same time, the district is not really favorable to him,” Boatright added, predicting that Neal’s blue-collar base would likely give him an edge next week.

Still, Boatright speculated that left-leaning enthusiasm for another candidate in Massachusetts, Sen. Ed Markey (D-MA) — who is running against a younger challenger, Rep. Joe Kennedy (D-MA), but has been backed by progressives in and outside of the district — could perhaps buoy Morse in his own race.

According to the JI poll, Kennedy leads Markey 44% to 37% among Democratic and independent voters in Massachusetts’s 1st congressional district. Nineteen percent of respondents said they were undecided.

Among the many issues demonstrating the political divide in the race, Neal and Morse have divergent views on aid to Israel. Morse, who is Jewish, believes the U.S. should condition aid to Israel in order to pressure the Israeli government to change its policies towards the Palestinians. Neal opposes conditioning security assistance to Israel.

According to the poll, a plurality of voters in the district — 48% — think aid to Israel should be conditioned, while 34% want assistance to continue without conditions. Eighteen percent — including 29% of voters who identified as “very liberal” — were not sure or expressed no opinion on the matter.

Morse said he does not support the Boycott, Divestment and Sanctions movement, but opposes efforts to legislate against BDS.

Neal is backed by a number of pro-Israel groups including Pro-Israel America and Democratic Majority for Israel (DMFI), which last week poured more than $100,000 into anti-Morse advertising.

Over the past year, Morse has built a formidable campaign operation, raising more than $1.3 million, according to the latest filings from the Federal Election Commission.

While the polling indicates Morse has been gaining momentum, he’ll still have to overcome the gap if he wants to pull off an upset in the district, which includes a large swath of western and central Massachusetts.

Morse, who is backed by Justice Democrats, picked up another key endorsement on Tuesday from Courage to Change, the political action committee founded by Rep. Alexandria Ocasio-Cortez (D-NY). The endorsement was not reflected in the poll because it occurred after the surveys were conducted.

Neal, who entered Congress in 1989 and serves as the powerful chairman of the tax-writing Ways and Means Committee, has vastly outraised his opponent, raking in nearly $3.8 million in his reelection effort.

Neal, 71, has also benefited from considerable outside spending. In addition to the money spent by DMFI, the American Working Families super PAC poured more than $500,000 in advertising into the race in an effort to boost Neal.

Even if Neal manages to defend his seat, his falling short of 50% in the poll signals a tough political environment for established longtime members of Congress.

“If this were an isolated phenomenon, it wouldn’t be a big deal, but there have been a bunch of these races,” Howard J. Gold, a professor of government at Smith College in Northampton, told JI. “This fits into a really well established and growing pattern, and the old guard, the Democratic establishment, has to be really, really, careful. They can’t rely on politics as it used to be.”

Jacob Kornbluh and Marc Rod contributed to this report.